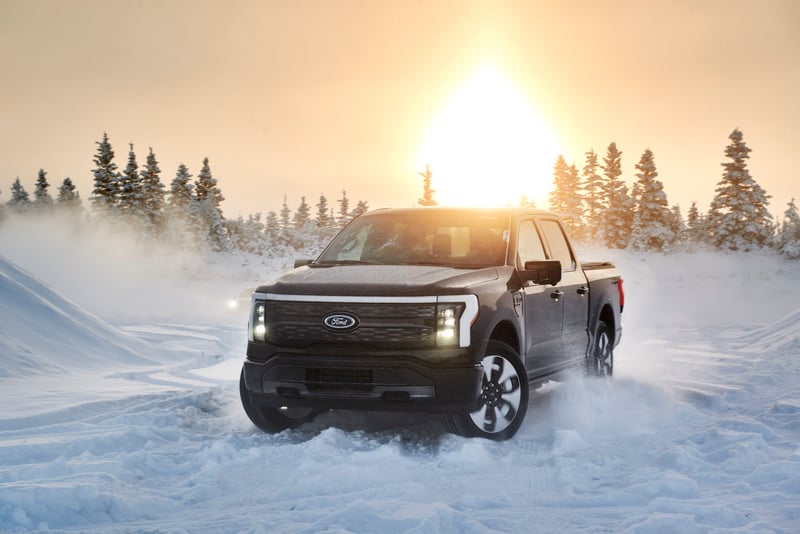 Final range estimates are in for the new Ford F-150 Lightning, ahead of its arrival this spring. Ford says extended-range Lightning and Platinum variants will actually deliver more range than originally projected following final EPA testing.  Lightning extended range trims (but not the Platinum) also best the Mustang Mach-E's top range. Range for the standard battery is unchanged.

The Lightning's EV sibling the Mach-E currently offers up to a 314-mile range, and that's for the California Route 1 model, according to the latest stats on Ford's website.  For more reference, the Mach-E Premium offers a 303-mile range and the GT offers a 270-mile range.

“We are laser focused on continually improving our energy consumption efficiency for Lightning and the team is really happy to deliver these results for our customers,” said Linda Zhang, chief program engineer, F-150 Lightning.

Earlier this year Ford announced it would nearly double production capacity to 150,000 a year to meet  F-150 Lightning demand.


Ford is also sharing a video of the Lightning enduring extreme cold-weather testing in Alaska. The automaker says its engineers spent three weeks in minus 30-degree temperatures this winter to continue fine-tuning the all-electric pickup’s performance on low-traction surfaces like snow and ice, and in extreme cold to give customers maximum confidence.

“Alaska provides us the extremely cold temperatures, snow and ice-covered surfaces that we need to push the F-150 Lightning in this type of testing, which is really focused on dialing-in how the truck delivers its power to the ground on slippery surfaces,” said Cameron Dillon, F-150 Lightning powertrain engineer. “Customers may not regularly see minus 30-degree mornings like we are seeing here, but they will see winter cold, snow and icy roads, and they should feel confident their F-150 Lightning is ready for all of it.”

Testing took place at a restricted military base in Alaska and involved a fleet of six F-150 Lightning pre-production units. Ford says engineers tested them on various types of wintery surfaces such as loose snow, packed-groomed snow, complete ice, half ice-half concrete surfaces and more in the freezing temperatures. The automaker says the Lightning can sense wheel slip and adjust power to the wheels within milliseconds, benefiting from the quick responses of the all-electric powertrain.

“F-150 Lightning in the snow is a very different ballgame compared to gas vehicles,” said Nick Harris, F-150 Lightning powertrain engineer. “The responses are extremely quick and the dual motors make it as if you have two engines pumping out power in one vehicle. A lot of our work is to coordinate the two motors to work together to best deliver torque to the ground, so that customers who drive in the snow and ice ultimately feel very confident.”

Ford attributes the Lightning's stability and confidence in slippery conditions to its all-electric powertrain, and Built Ford Tough functionality:

Ford says its engineers are able to adjust the calibration in real-time while testing, helping to maximize efficiency during the 12-hour test days. In addition to Alaska, the F-150 Lightning powertrain team has conducted low-mu testing in Michigan’s Upper Peninsula, Borrego Springs, Johnson Valley, and at Ford’s Michigan Proving Grounds near Romeo.