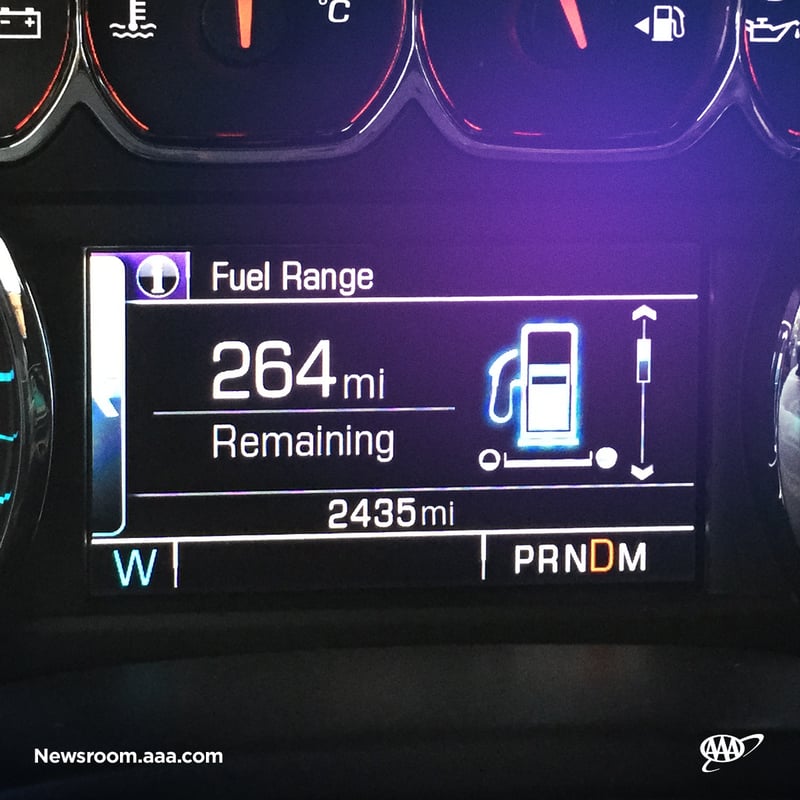 If you're one of those people who finds themselves watching your digital fuel gauge count down your "miles to empty"  before coasting into the gas station on fumes, you'll want to heed a new warning from AAA.  The American Automobile Association says those gauges aren't always accurate, so it's best not rely too heavily on them. Your less risky option, researchers say, is to fill up when you hit the one-quarter of a tank mark.

AAA researchers studied in-dash fuel economy displays that give you "miles to empty" or estimate the number of miles a vehicle gets per gallon.  Testing on these systems found that their estimates vary significantly over shorter trips and depend on the consistency of various factors that impact gas mileage like speed and acceleration. Researchers say relying too much on them could put you at risk of running out of gas. And many people do rely on them. According to an AAA consumer survey, 74% of drivers use their “miles-to-empty” display when they are low on gas to decide when to fill up.

“People want to get the most out of a tank of gas, especially when prices are higher,” said Megan McKernan, manager of the Automotive Research Center. “Collectively, the systems we tested were relatively accurate, but a closer examination of different driving scenarios revealed significant variability based on changes in speed, acceleration and distance.”

Driving habits can impact fuel economy and therefore the accuracy of the digital fuel gauge in your vehicle. To put that to the test,  AAA in collaboration with the Automotive Research Center (ARC) of the Automobile Club of Southern California, used a dynamometer, essentially a treadmill for vehicle testing, to run selected vehicles through a series of simulated driving scenarios to determine the accuracy of the fuel economy estimation and range value (aka “miles-to-empty”) systems.

“We ran our test vehicles through different driving situations ranging from cruising at highway speeds to being stuck in traffic to typical city driving,” said McKernan. “Despite the irregularities our testing found, a vehicle’s fuel economy display is an important tool to understand how different driving styles impact how efficiently a vehicle uses fuel.”

AAA TIP:  If you want to know how your specific driving habits influence your fuel economy, reset your vehicle’s trip data after filling up, and then watch how your car's fuel economy display changes as driving conditions change.

AAA is also taking this opportunity to address the recent rising gas prices - they've now reached their highest point in seven years. To offset some of those costs, AAA recommends the following:

AAA also offers another last reminder that it's best to keep at least a quarter of a tank of gas in your vehicle in case of of unexpected delays. Doing this will also help prevent fuel pump damage that can happen when a vehicle’s gas tank is regularly run down to empty.