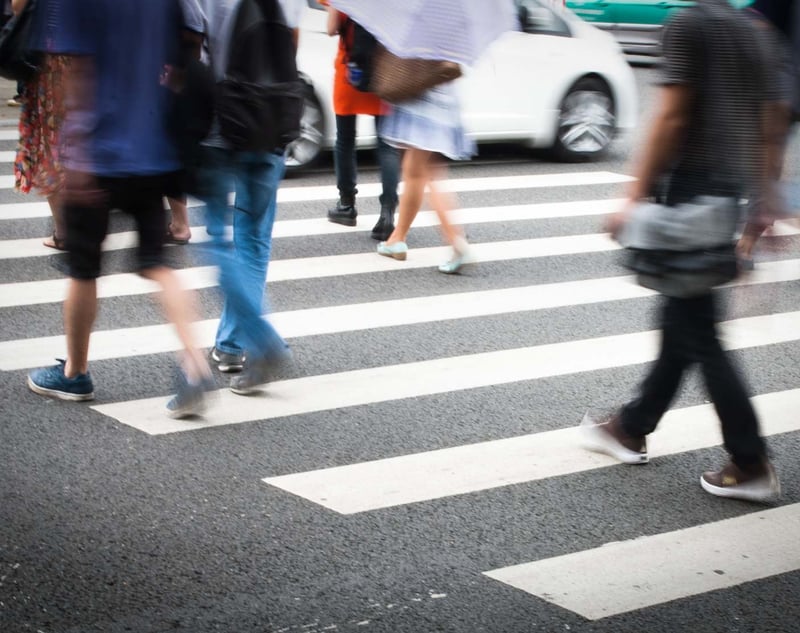 The Insurance Institute of Highway Safety is again turning its focus on the dangers larger vehicles like SUVs, pickups, vans and minivans pose to pedestrians. The IIHS says its new research finds that those types of vehicles are substantially more likely than cars to hit pedestrians when making turns. The IIHS says visibility issues may to be blame, suggesting larger vehicles may not afford drivers as clear a view of people crossing the road.

“We already know that larger vehicles cause more severe injuries when they strike pedestrians,” says IIHS Vice President of Research Jessica Cicchino, one of the study’s authors. “The link between these vehicle types and certain common pedestrian crashes points to another way that the increase in SUVs on the roads might be changing the crash picture.”


Pedestrian crash deaths have increased nearly every year since hitting a low point in 2009. In 2020, the IIHS says they increased 59 percent to top 6,500 fatalities while another 54,700 pedestrians were injured in motor vehicle crashes. The IIHS suspects one factor is the growing prevalence of larger vehicles.

The new research follows a 2020 IIHS study that also showed SUVs were more dangerous to pedestrians. What's new here is that the research focuses on certain types of pedestrian crashes — including those that occur while the vehicle is turning —  more likely to occur with SUVs, pickups, vans and minivans.

IIHS researchers looked at the most common types of single-vehicle, single-pedestrian crashes at or near intersections and at other locations. Then they looked at what types of vehicles were involved in those incidents.

“It’s possible that the size, shape or location of the A-pillars that support the roof on either side of the windshield could make it harder for drivers of these larger vehicles to see crossing pedestrians when they are turning,” says IIHS Senior Transportation Engineer Wen Hu

Researchers also studied crashes at other locations. They found that SUVs and pickups were associated with 51 percent and 25 percent greater odds than cars of killing a pedestrian walking or running along the road versus a fatal straight-on crash with a crossing pedestrian. The IIHS says larger vehicles and walking-along-the-road crashes are both more common in rural areas and contribute to heightened odds, though whether the crash occurred in a rural area and other environmental factors were factored into its analysis. Such incidents accounted for around 2,500 out of some 14,000 U.S. fatal pedestrian crashes that did not involve intersections.

IIHS says its new findings warrant a closer look at how the designs of larger vehicles affect driver visibility and that more research is needed to understand the role visibility plays these crashes. Earlier studies have shown that A-pillars — the struts connecting the roof to the vehicle’s body on either side of the windshield — can create blind spots that can make it difficult for drivers to see pedestrians and that these blind spots grow larger as A-pillars become wider.

While their heavier weight means that larger passenger vehicles need stronger pillars to protect occupants in rollover crashes, the IIHS says a systematic assessment of A-pillar design by vehicle type hasn't been conducted. Other design elements of larger vehicles could also impede drivers’ ability to see pedestrians, such as their high ride heights and long front ends.

The IIHS offers another dataset, this one based on police-reported pedestrian crashes in North Carolina during 2010-18. Researchers say they found similar, though less dramatic results in this dataset, which includes less severe crashes.

In the North Carolina analysis, IIHS sats at or near intersections, pickups were 42 percent more likely and SUVs were 23 percent more likely than cars to hit pedestrians when turning left. There was no significant difference in the odds of a right-turn crash for the different types of vehicles. Turning crashes accounted for about 2,070 of 5,500 crashes that occurred at or near intersections in North Carolina over the study period.

Turning crashes were the most common type among the police-reported intersection crashes in North Carolina, while crashes in which the vehicle was continuing straight made up a majority of the fatal intersection crashes nationwide. That’s probably because drivers have to slow down to make a turn, so the impact is less likely to be deadly.

“Improving vehicle design, along with addressing road infrastructure and vehicle speeds, can play an important part in reducing pedestrian crashes and fatalities,” Hu says. “Our findings suggest that looking at the problem through the lens of vehicle type could also be productive.”

The IIHS says some general vehicle-design solutions are already showing promise in increasing safety for pedestrians. They include AEB systems that can detect and avoid pedestrians or reduce impact speed; hood airbags; hoods that automatically pop up on impact; and more sloped front ends.