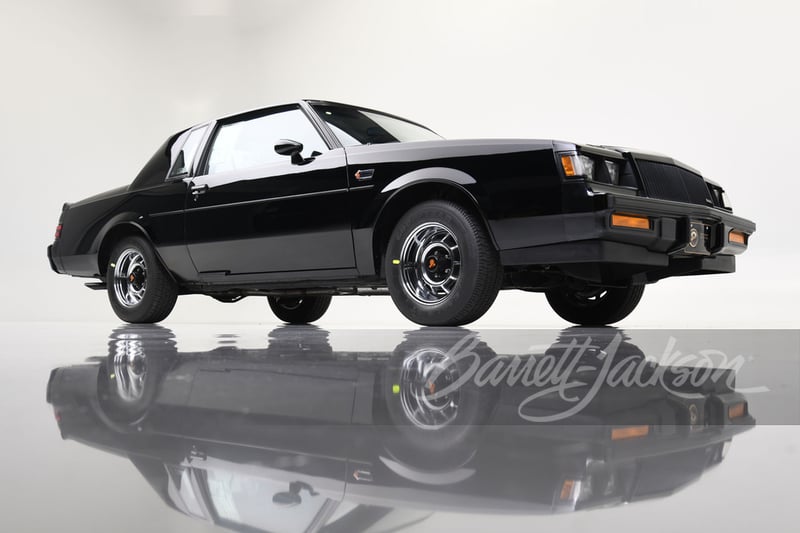 I’ve always had a love affair with the Buick Grand National.  I told of my first experience driving one in my True Stories series #25 titled Auctions.

So you can bet this got my attention: the last Buick Grand National ever produced is headed to the auction block at Barrett-Jackson Scottsdale later this month. The model rolled off the line at GM's Pontiac Michigan assembly plant on December 11, 1987. The car was signed by assembly workers, along with Lloyd and Mark Reuss, the former and current presidents of General Motors. It's not just history making for being the last Grand National, but it also marked the closure of the Pontiac plant.

Since rolling off the line in '87, the car has had a single owner, Bob Colvin - owner of Springhill Motor Company in Louisiana -  who describes campaigning Buick to get the last car. It has just 33 miles on the odometer and is reportedly expected to go for as much as $500,000 on the block.

According to the Barrett-Jackson listing:


Lot #1347 - Built on December 11, 1987, this 1987 Buick Grand National has a significant place in history. As the very last Grand National built, this car marked the end of General Motor's mid-size rear-wheel-drive G Platform. It also marked the closing of GM's Pontiac, MI, assembly plant, which had been responsible for producing millions of cars since it first opened in 1927.

This Grand National was the final car to leave the assembly line and it features unprecedented levels of photo and video documentation. A GM film crew captured the car's final assembly and the emotional line workers who autographed their names on the engine and throughout the undercarriage as they installed their part for the final time. As the Buick progressed down the assembly line, the workers decorated it with signs reading, "Built by the Best" and "The End," and both signs are included in the sale. Designating it is the final Grand National, Buick applied an additional badge to the car's header panel, just above the passenger side headlight assembly.

The car was prominently displayed by Buick at the 2003 Buick Centennial in Flint, MI, and starred in the 2012 film "BLACK AIR: The Buick Grand National Documentary." The car has been perfectly preserved in its climate-controlled "bedroom" in Louisiana.

It still wears the original Window Sticker that says, "The Last Grand National," and all the factory-installed interior plastic is still in place. The car is also signed by Lloyd and Mark Reuss, the former and current presidents of General Motors. The Buick has 33 miles (mileage not indicated on the title) and is powered by a turbocharged 3.8-liter V6 engine mated to a 4-speed automatic transmission.