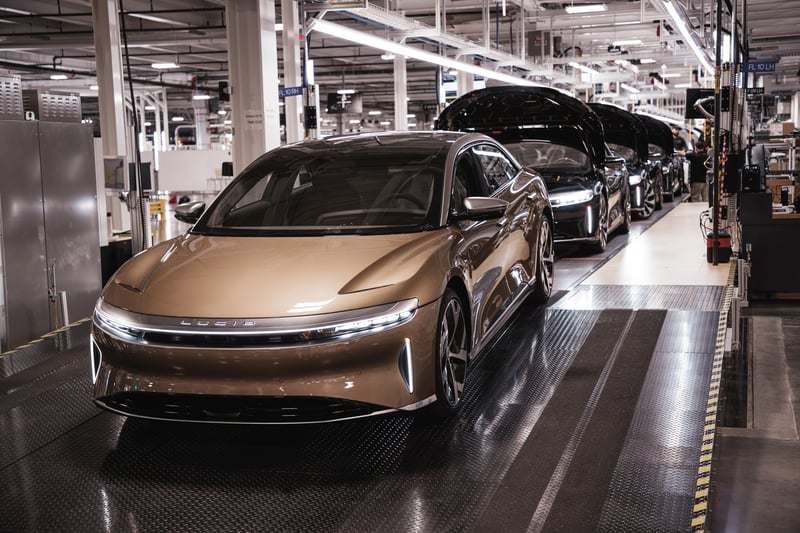 Lucid Motors is sharing a new video teasing the Lucid Air ahead of its first deliveries scheduled for later this month. This week, Lucid shared a YouTube video of the all-electric sedan being tested on the track at speeds reaching up to 168 mile per hour.  The Lucid Air being tested is the 1,111-horsepower model, the most powerful in the lineup but not the one with the most range.

Last week, Lucid Motors announced that the first all-electric Lucid sedan deliveries are slated to begin in October.  The announcement came during Lucid's Production Preview week at its Advanced Manufacturing Plant (AMP-1) and Lucid Powertrain Manufacturing (LPM-1) factories in Casa Grande, Arizona. Lucid opened the doors to the facilities to members of the media and investor communities, policymakers, and Lucid Air Dream Edition customers. Some event-goers even became some of the first to test drive the Lucid Air.  It's also when the first customer-quality Lucid Air luxury electric sedans rolled off the assembly line. Arizona Governor Doug Ducey also took part in a factory commissioning ceremony.

With customer-quality cars now coming off the line, Lucid says it's confirmed that the Air meets all the applicable regulatory requirements from the EPA and U.S. Department of Transportation. Lucid says it expects reservation holders of Lucid Air Dream Edition models will begin receiving their vehicles in late October, with customer deliveries ramping up thereafter. Grand Touring, Touring, and Air Pure model deliveries are expected to follow. So far, Lucid says it's received more than 13,000 reservations for Lucid Air and the automaker says it's increased planned total production quantity of the Dream Edition to 520 vehicles.

"The proprietary EV technology that Lucid has developed will make it possible to travel more miles using less battery energy. For example, our Lucid Air Grand Touring has an official EPA rating of 516 miles of range with a 112-kWh battery pack, giving it an industry-leading efficiency of 4.6 miles per kWh. Our technology will allow for increasingly lighter, more efficient, and less expensive EVs, and today represents a major step in our journey to expand the accessibility of more sustainable transportation," said Peter Rawlinson, CEO and CTO, Lucid Group. "I'm delighted that production cars endowed with this level of efficiency are currently driving off our factory line."

Lucid's AMP-1 factory was built in less than a year and it's the first greenfield, dedicated electric vehicle factory to be built in North America. Lucid says it's already planning an expansion to support an increase in Air production.