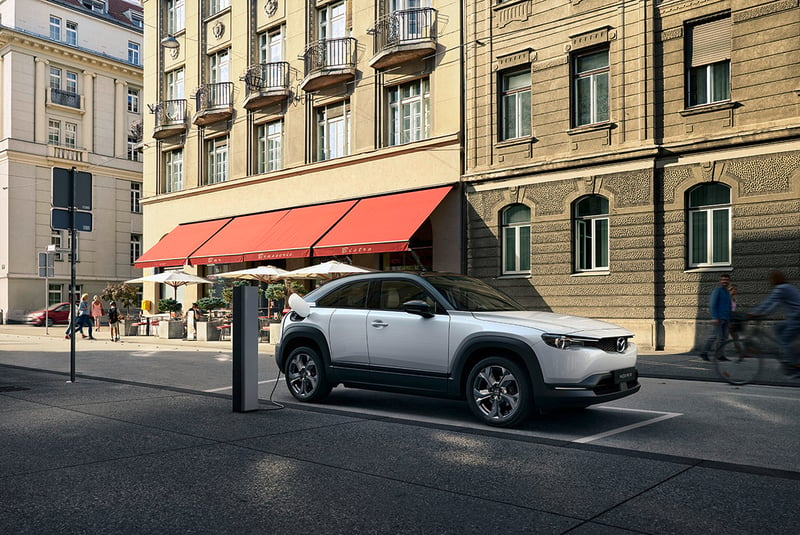 Mazda builds some of the most fun to drive, stylish and near premium SUVs out there and soon three brand new models will join the lineup - at least two of them offering plug-in hybrid powertrains and the largest one offering three-rows of seating.  The three new SUVS follow the 2022 MX-30, Mazda's first-ever all-electric SUV pictured above.

Three All-New SUVs On The Way


Mazda says the new CX-50, CX-90 and CX-70 will all roll out by 2023. THE CX-50 arrives first and will be revealed next month. Mazda says the CX-50 midsize crossover will share a platform with the CX-30 and Mazda3 and will offer enhanced all-wheel drive (AWD) capabilities and functionality for drivers with outdoor active lifestyles.   The CX-50 is also slated to be the first Mazda to be built at the new Mazda Toyota joint venture factory, Mazda Toyota Manufacturing, U.S.A., Inc. in Huntsville, Alabama. Production begins in January 2022. (It's the same plant Toyota just started building the Corolla Cross SUV.)

Two larger SUVs will follow the CX-50.  The three-row CX-90 is the largest, and will replace the current CX-9, while the new-to-the-lineup CX-70 offers two-rows.  Both will be based on an all-new large platform that will feature Mazda's new longitudinal architecture with new inline-six-cylinder and plug-in hybrid powertrains. The automaker says the shared layout gives both vehicles Mazda's "next-level performance, handling, technology, and design." Mazda says they're also geared towards U.S. customers with "expanded interior cabin and cargo spaces."

We can expect more details on trims and pricing closer to their on-sale dates.


Even with three new SUVs on the way, Mazda isn't forgetting about its runaway best-selling U.S. model the CX-5. It's being refreshed for the new model year and also new for 2022, i-Activ AWD is now standard across its CX lineup. Mazda sold over 13,000 CX-5's in the U.S. in September 2021.