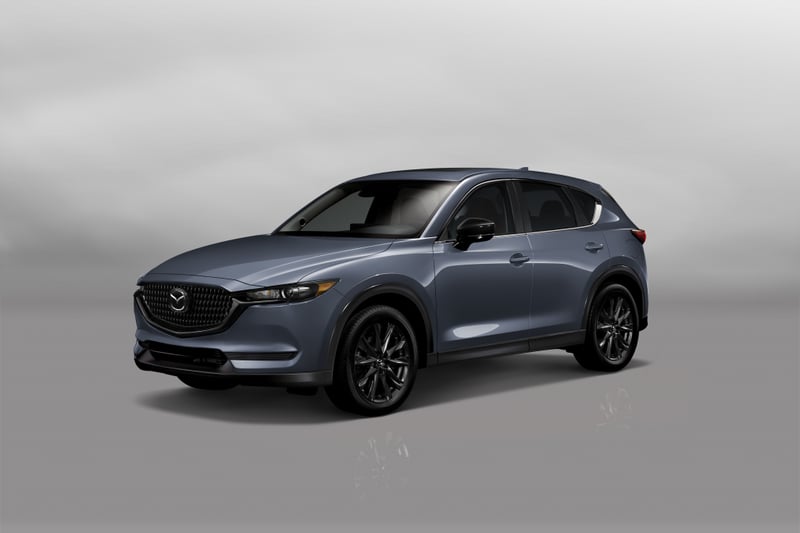 The Insurance Institute for Highway Safety is introducing an updated, tougher side crash test in the effort to address higher-speed crashes and it's proving to be a tough one for small SUVs.   The IIHS says in the first tests of 2020-21 model year vehicles, only one out of 20 small SUVs tested earned a good rating, with the honors going to the 2021 Mazda CX-5.  In the updated test, not only are test vehicles going a faster speed , they are also hitting a heavier barrier than in the earlier version of the side test.

“We developed this new test because we suspected there was room for more progress, and these results confirm that,” IIHS President David Harkey says. “The good rating for the CX-5 shows that robust protection in a more severe side crash is achievable.”

“Safety is a top priority at Mazda, and we have long researched how to protect occupants in side impacts,” said Masaki Ueno, MNAO vice president of R&D, design, and quality assurance. “We have studied real-world crashes and used computer simulation to consider body structure and load paths, resulting in the robust design that has existed in the CX-5 since the 2017 model year.”

The IIHS says all but one of the tested vehicles was a 2021 model. Mitsubishi skipped the Eclipse Cross 2021 model year so the 2020 model was tested. With the exception of the Compass and the Tucson, the ratings carry over to 2022 models.

“Obviously, these results aren’t great, but they’re in line with what we expected when we adopted this more stringent test,” says IIHS Senior Research Engineer Becky Mueller, whose research formed the foundation for the new test protocol.

Note, the new test won't be used as part of the rating process until the IIHS updates its criteria in 2023. You can check out the IIHS's list of the updated side test ratings here.

Original vs Updated Side Crash Test


IIHS safety researchers say the ratings highlight a wide range of performance among vehicles built to excel in an earlier version of the side test.

All 20 small SUVs earn good ratings in the first-generation side test. IIHS says that’s true for almost all current vehicles, but it hasn’t always been the case. When the original side test was introduced in 2003, only about 1 in 5 models earned a good rating.

The IIHS says its updated test is designed to address those crashes. The updated side test uses a heavier barrier traveling at a higher speed to simulate the striking vehicle. The new barrier weighs 4,180 pounds — close to the weight of today’s midsize SUVs — and strikes the test vehicle at 37 mph, compared with a 3,300-pound barrier traveling at 31 mph in the original evaluation. Together, those two changes mean it involves 82 percent more energy.

The IIHS also says the honeycomb striking surface of the new barrier also has a different design that acts more like a real SUV or pickup when it hits another vehicle.

Like the original test, the updated side rating is based on how well the occupant compartment structure holds its shape during the crash, injury measures collected from dummies positioned in the driver seat and the rear seat behind the driver, and a supplemental measure of how well the airbags protect the heads of the two dummies. The SID-IIs dummy used in both seating positions represents a small woman or 12-year-old child.

The IIHS says the new test reveals wide discrepancies in how much protection these small SUVs provide for the pelvis and the chest areas. Only five vehicles earn good or acceptable scores across the board for these injury measures.

Researchers attribute that to the new striking barrier.  They say it bends around the B-pillar between the driver and rear passenger doors. Mueller observed the same tendency by the fronts of SUVs and pickups during vehicle-to-vehicle research tests. As a result of this behavior, depressions are formed in the front and rear doors of the struck vehicle and the occupant space can be compromised even if the B-pillar can withstand the higher-speed impact. To adapt, the IIHSA suggests that manufacturers will probably need to strengthen the horizontal door beams to reduce that intrusion and adjust their torso- and pelvis-protecting airbags to provide more coverage and cushioning.


In real-world side crashes, stronger structures are linked to higher survival rates. While all 20 small SUVs received good scores for their structures in the original test, only eight earn good ratings for structural integrity in the new, higher-energy evaluation. The B-pillar of the worst performer by this metric, the HR-V, began to tear away from the frame, allowing the side of the vehicle to crush inward almost to the center of the driver seat.

The IIHS says the vehicles that earned marginal or poor overall ratings in the new test generally struggled with both structural issues and high chest and pelvis injury measurements from both dummies. The HR-V’s weak B-pillar contributed to elevated dummy injury measures, for example. Similarly, a combination of structural weakness and inadequate seat-mounted torso-protecting airbags made the Eclipse Cross the only vehicle to earn a poor rating for driver chest protection.

The Equinox and its twin, the Terrain, were exceptions among the poor and marginal performers. Researchers say the tested vehicle, an Equinox, demonstrated a strong structure, but only managed a marginal rating overall due to inadequate head protection and elevated head injury risk for the rear passenger and elevated chest injury measures for the driver.

Rather than similar flaws, there were many different reasons why the nine acceptable-rated vehicles fell short of a good rating: a marginal driver chest injury for the Encore, inadequate head-protecting airbags for the Rogue, heightened injury measures for the driver’s pelvis for the RAV4, and so forth.

“There’s no single reason why so many side crashes still result in fatalities, but these results provide a roadmap for specific improvements that can save lives,” Mueller says.


The IIHS says the faster manufacturers can make such improvements the better. However, for now, while the IIHS will publish the results of the new test,  it won't make them an award criteria until updates are made in 2023. So the original side test will remain the requirement for TOP SAFETY PICK and TOP SAFETY PICK+ until its replaced with the new tougher test.