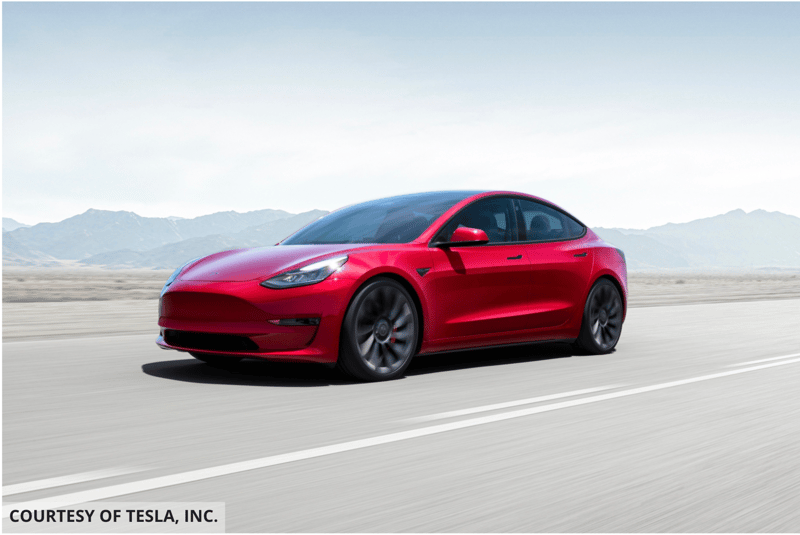 The Tesla Model 3 is the most American-made vehicle on the road for 2021, according Cars.com's new 2021 American-Made Index (AMI). The AMI is an independent, annual list that ranks the new vehicles that contribute most to the U.S. economy. Cars.com says the rankings are based on various criteria ranging from U.S. factory jobs and manufacturing plants to parts sourcing.

It's the first time Tesla's topped Cars.com's AMI list. The Model 3 also has the distinction of being the first all-electric vehicle with a No. 1 ranking.  Overall, Tesla has two vehicles on the top ten list, Chevrolet, Ford, Jeep, and Toyota each have one, while Honda claims the most at four.  You can see the entire list here.

“Tesla has now cemented itself firmly on Cars.com’s American Made-Index, with the Model 3 and the Model Y taking the No. 1 and No. 3 spots, respectively,” says Kelsey Mays, Cars.com assistant managing editor and the AMI’s lead researcher. “The 2021 AMI arrives against a backdrop of scarce inventory amid a microchip shortage and heightened consumer demand. Despite this, there remains a high consumer focus on buying American-made vehicles as the economy is still emerging from the effects of the pandemic. For those interested in making the biggest impact here, the index gives shoppers a way to purchase the most American-made vehicle.”

Here's a look at the Top 10 list and each model's  U.S. Assembly Location:

This is just the second year Tesla's participated in the list rankings. In 2020, the automaker had three models in the top ten.  The Michigan-built Ford Mustang makes it first top ten appearance, and the Stellantis’ Jeep Cherokee, assembled in northern Illinois, is in the top five once again.  The four Honda nameplates that make the list are all built in Alabama.

To come up with the rankings, Cars.com researchers started by looking at the 344 models on the market for 2021. Ninety models qualified for this year’s AMI. Overall, GM led the way with 19 cars on the index, followed by Honda (13), Toyota (12), and Ford (11). Nearly 50% of the vehicles are SUVs, followed by sedans and/or hatchbacks models (28%) and pickup trucks (17%).

Increased Importance on Buying "American Made"

Cars.com says its new research finds that 72% of shoppers "consider a car’s U.S. economic impact a significant or deciding factor in their vehicle purchase." That's up just slightly from 70% in 2020. Even as the pandemic threat begins to wane, a third of respondents in 2021 still say COVID-19 has made them more likely to buy an American-built vehicle. Cars.com says up from just a quarter of respondents in 2020, this year 29% of those surveyed say that it’s “unpatriotic” to "purchase a non-American-made vehicle".