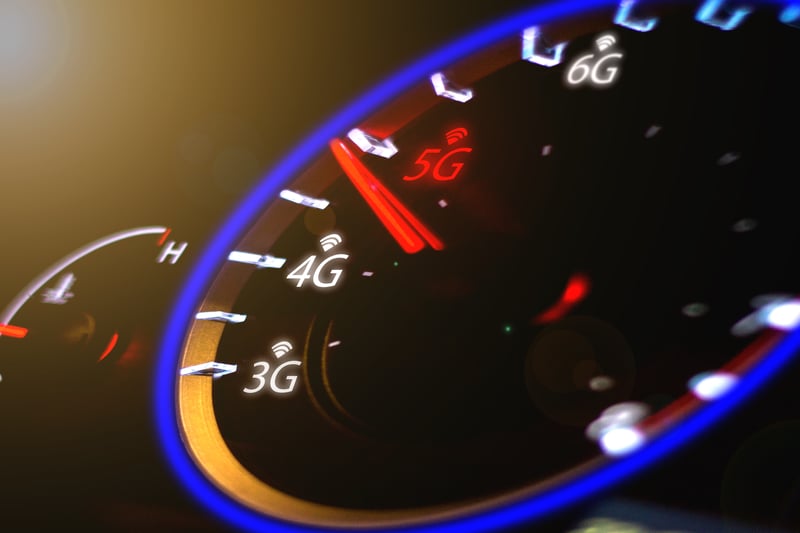 Editor's Note: This article was originally posted February 10, 2022, updated on February 18, February 22, March 3, 2022 and most recently on April 1, 2022. We recommend drivers check with their dealer for specific model information, end of service dates, and any software/hardware options available to them.

AT&T and now the Sprint 3G Network are now both things of the past. March 31st, T-Mobile finished retiring Sprint's 3G network. (T-Mobile merged with Sprint in 2020.)  T-Mobile will retire its own 3G network in July and Verizon will shut off its 3G Network by the end of the year. AT&T was the first to retire its 3G network on February 22.

What It Means For Drivers

The "3G Sunset" is occurring so wireless carriers can make way for faster 5G networks. For drivers with 3G-connected vehicles, in many cases, it means a loss of connected services.  When carriers phase out their 3G networks,  vehicles with 3G will no longer have an active WiFi connection and won't be unable to transmit data anymore. It's not a decision by automakers, but by the mobile industry.

One major concern is the loss of some emergency services on 3G-equipped models, especially those where there may not be an option to upgrade. Consumer Reports recently reported that millions of 3G-connected vehicles could lose their automatic crash notification feature that alerts first responders in the event of a crash, and without an upgrade some vehicles could lose that function permanently.  However, Consumer Reports adds that some automakers like Mazda and Ford won't be affected since they don't use in-car 3G for those services, but instead connect via a driver's cell phone for crash notification. (Mitsubishi tells CR that it never used 3G at all.) Another connected emergency service that will be impacted is the"SOS" button that also connects drivers to emergency services.


In July, T-Mobile will retire its own 3G network after shutting down Sprint's network in March. Check with your dealer to find out if your manufacturer uses T-Mobile/Sprint to provide wireless service and if so, when your vehicle's services will be impacted.

If you own a vehicle made by Stellantis, formerly Fiat Chrysler Automobiles, you'll want to check with your dealer THIS MONTH to find out if you are impacted by the Sprint or T-Mobile 3G shutdown as dates vary.


According to The Drive, the 3G sunset will impact some Stellantis models (Alfa Romeo, Chrysler, Dodge, Fiat, Jeep, Maserati, and Ram). Another published report states that certain models with 3G will be upgraded to 4G but require a data package.

Here's are additional timeline details from the FCC's website:


So, what then is a 3G-connected vehicle to do without a 3G network? The answer will depend what nameplate the vehicle wears.  But make no mistake, it will impact a lot of vehicles and from many different automakers.

For some automakers the answer will be a hardware or over-the-air software upgrade (though some could charge a fee.) This list below provides information from various sources, including automakers websites, Reddit, The Drive CNBC and Consumer Reports.   We recommend you check with your dealer to ensure you have the most up-to-date information.

2019-2021 RDX: From Acura's notice: AcuraLink services and Wi-Fi Hotspot using the 3G network stopped working as of February 22, 2022. Additionally, future Over the Air Update fixes and enhancements to your audio and connectivity system cannot be downloaded via the cellular network. Only Wi-Fi and USB updates will be available.  NOTE: Not all 2021 RDX vehicles will require an OTA update. To confirm if your vehicle needs the update, press the “Home” button on your vehicle audio and connectivity system. If an update is available for your vehicle, the System Updates icon will show an exclamation point (!). PLEASE NOTE : Unless the update is completed by February 22, 2022, Automatic Collision Notification will not function. If your airbag deploys or a significant collision is detected, your vehicle will be unable to contact an operator who could request that emergency services be dispatched. Read More.

Acura says you can continue to use AcuraLink services if the hardware in your vehicle is updated with a new device. You'll need to contact your dealer for more information. Read More on Acura's website.

Audi has also announced it is partnering with Verizon to bring 5G connectivity to its lineup beginning with select 2024 models.

BMW also uses AT&T and it's been phasing out 3G-reliant Connected Drive renewals. Customers will be notified via email or First-Class Mail about whether their vehicles are eligible for an upgrade or not. Contact your BMW dealer for details.

A Ford Reddit user recently shared a email communication he received from Ford about his 2016 Ford Fusion. It states that he can purchase a 4G modem update that will need to be installed at a Ford dealers.  Read the Reddit post.

As reported by Consumer Reports, Honda owners  had until February 22 to download upgrade software for free, after that they'll have to pay for a upgrade which could cost upward of $900.  Honda says over the air cellular updates take about 17-20 minutes. Here is a list of impacted models:

3G connectivity ended for Nissan Connect and INFINITI In Touch services on February 22. Contact your dealer for more details, but there are reportedly no announced upgrade plans as of now.

The AT&T 3G sunset impacts Model S vehicles built before June 2015 that have not been upgraded to an LTE-capable modem or purchased Infotainment Upgrade, as these vehicles were not produced with a 4G/LTE capable modem. Owners can purchase an LTE-modem upgrade to be installed by Tesla. Read more.

Subaru's website says: If you are an active STARLINK Safety & Security service subscriber and you do not update your STARLINK system prior to February 2022, your services will automatically be cancelled, and you will be issued a pro-rated refund for the unused portion of your subscription. You will lose access to services such as Automatic Collision Notification, SOS Emergency Assistance, Stolen Vehicle Recovery and Remote Features such as locking and unlocking your Subaru vehicle.

Volvo says the 3G sunset impacts all connected services including apps, SOS and On Call in-car services.  Volvo says it will offer limited upgrade quantities for most affected models (limited due to supplier constraints and shortages.) It's not a free hardware upgrade and customers will need to purchase a compatible modem, but no pricing is currently given and also be aware, there could be a waiting list for parts. The automaker says 2016 XC90 owners will have a solution available later in 2022.  Fill out a request form here.

The 3G sunset will impact VW Car-Net services for certain 2014-2019 model year vehicles.  VW offers a software upgrade for 2017-2019 models, which doesn't look like it will be available until fall 2022.  In the meantime and for other impacted models, VW says it has a third-party optional, $295 4G solution called Motion by Mojio to keep connected services running. VW's website says some vehicles will be eligible for a free upgrade but you'll need to enter your VIN number here to see what your options are.

Toyota and Lexus both use Verizon as their mobile provider.

Here's are the Enform impacted services:

Lexus is reportedly not offering an upgrade at this time. Read more on the Lexus website.


According to a published report, some, but not all, newer Hyundai and Genesis vehicles will receive a free software update. Hyundai has also reportedly already discontinued Blue Link in affected older 2012-2016 model year vehicles as of Jan 1, 2022. There is no info from Kia at this time.


One CX-5 owner shared an email from February 2021 that provided a list of some no-cost options given to impacted owners of certain models, including a free new remote start system or a $1000 voucher towards a new Mazda. Mazda partners with Verizon.


As mentioned above, Audi and VW will both be offering an optional 4G upgrade through a third party mobility platform called Mojio. Audi's service is called Motion for Audi Connect. VW's is called Motion by Mojio (and the company says it's available for direct purchase by consumers in the U.S.).

Mojio says its new 4G Upgrade Program gives OEMs the ability to purchase vouchers to be exchanged for an 18 month subscription to Motion by Mojio, which includes a plug-and-play 4G LTE telematics device, new automatic crash notification and e911 emergency response service, plus access to a growing range of app-based features.  OEM can buy vouchers for a one-time cost of $295 per vehicle and distribute them digitally to customers impacted by the 3G shutdown.

Audi: Mojio is also collaborating with Audi of America to provide affected customers with a dealer-installed connected vehicle service called Motion for Audi connect, which Mojio says was developed alongside Audi.  Audi customers are encouraged to contact their Audi dealer to determine eligibility and schedule the required service.