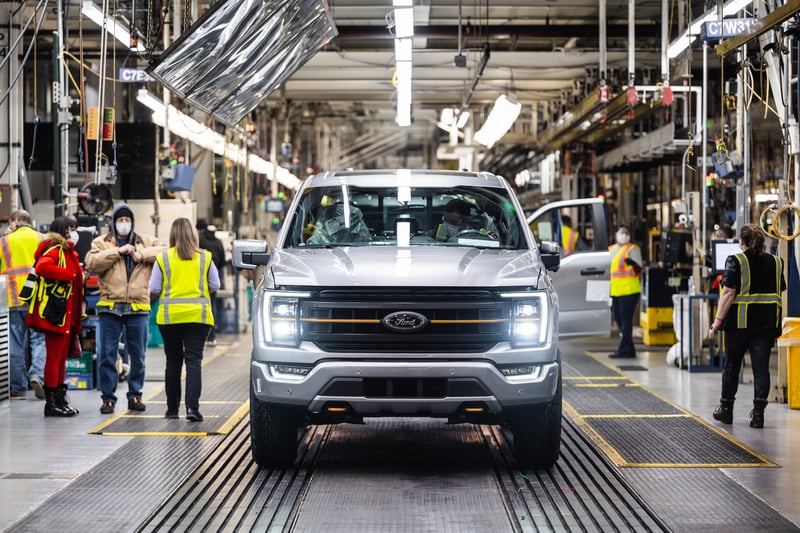 An iSeeCars.com study is giving us a clear picture of just what vehicles Americans were most interested in during 2021 and pickups are again proving their dominance in the U.S. market. iSeeCars researchers say pickups, the F-150 in particular, are the most popular vehicles for both used and new car shoppers.

The Ford F-150 has been America's best-selling new truck for 45 years - and the overall best-selling new vehicle for 40 years. It recently celebrated a milestone, too. Ford built the 40th millionth Ford F-Series pickup last week. Pictured above, the 2022 F-150 Tremor in Iconic Silver paint rolled off the line on Wednesday, Jan. 26, 2022 at Ford's Dearborn Truck Plant in Michigan. It goes to a customer in Texas where, as you'll see below. the F-150 is the number one selling new and used vehicle.

Most Popular New and Used Cars By State

In its analysis of most popular new vehicles by state,  iSeeCars found that along with the F-150, three additional pickup trucks are also among the top 10 best sellers in 2021.  Trucks also account for the top three best-selling used vehicles.

To compile its data, iSeeCars looked at over 17.4 million vehicle sales to determine the most popular used and new cars by state.

Most Popular New Vehicles By State

Most Popular Used Vehicles By State

Pickup trucks remain in-demand vehicles for both new and used car buyers, with no signs of slowing down. The Ford F-150 dominates both new and used car sales, while additional American pickup trucks like the Chevrolet Silverado 1500, the Ram Pickup 1500, the GMC Sierra 1500, and the Toyota Tacoma also appear as the most popular vehicles in multiple states. iSeeCars.com says that thanks to their versatility, pickup trucks have evolved from strictly working vehicles to being embraced as family-friendly haulers.  Researchers also point out that a number of compact pickup trucks recently entered the market (like the Hyundai Santa Cruz and Ford Maverick which have both been reviewed by Car Pro Show host Jerry Reynolds),  giving consumers even more options.

To read more about the study visit iSeeCars.com.