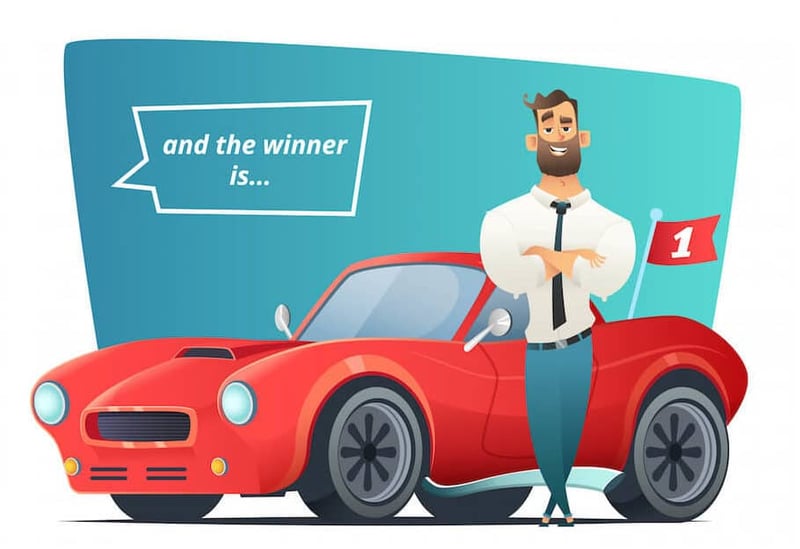 It was mid-November, 1982 and I had just quit my job at the only place I had ever worked, a Ford dealership in Dallas. I started washing cars there 10 years earlier and rose through the ranks, eventually becoming the General Sales Manager at the age of 22.

The Owner of the dealership obtained it from his father, who was one of the best and most honest car dealers I had ever known. 1979-1981 were very tough years in the car industry. In fact, 1981 was the worst year since 1962. The lack of business took a toll on cash reserves, and in the summer of 1982 the owner took on a partner, which gave the dealership a much-needed cash infusion. The problem was, I really disliked the new guy. He loved to second-guess every decision anybody made. He walked around the dealership all day smoking a cigarette, one after the other.

On that November day, he walked in my office and questioned something, and I hit my saturation point. I stood up, pitched the keys to the dealership to him, and simply said: "I've had enough" and walked out. About 15 minutes later, it dawned on me what I had done. I had no job, no income, a mortgage, and a baby on the way. I didn't even own a car.

I had a friend who was the used car manager at a Ford dealership in Duncanville, TX. Word quickly spread that I left my job, everyone thought I'd be there forever. My friend asked if I wanted to sell cars for him, and he told me he'd give me a company car. I accepted and showed up for work the next day. It was a rough transition from being the boss to being one of about 40 salespeople.

On my first day, someone told me about a sales contest that had started a little over two weeks earlier and ended on December 31. The top two salespeople who sold the most cars in that two months got an expense paid trip to Hawaii, hotel, airfare, and $500 cash included. I thought it was a little curious that two salespeople got to go, and that's when I learned about the man they called Wimp.

Wimp Childress was a large man in size and reputation. He had been selling cars there for years and never left his office. He had a steady stream of customers coming in every day. I can't recall how many people I greeted in the parking lot, only to hear "we're here to see Wimp". Wimp always had a cigar in his mouth and a cowboy hat on his head, and he hadn't seen his belt buckle in years. He had a contagious laugh. His style was to tell his customers to go find which vehicle they wanted, write down the stock number, and to come back to his office.

There wasn't any need in having any kind of sales contest with just one winner, nobody would even try-it was a foregone conclusion that Wimp would end up in first place. This was why the top two places got to go to Hawaii.

I didn't sell a single car my first three days and we were having an unusually cold November. My 4th day on the job was a Saturday and I got a hat trick, car business term for selling three cars in one day. I sent postcards to all the customers I sold through the years and asked them to send me some business. Many were Dallas Police Officers and they started flocking in to buy Fords.

I ended the month of November with around 12 cars sold, not bad for less than two weeks, including the Thanksgiving holiday. I was not thinking about Hawaii since I got such a late start. There was another salesperson who had been there a long time, like Wimp. His name was Scott and was a really nice guy. November ended with Wimp selling the most cars, and Scott came in second. There was a board in the manager's office with every salesperson's name on it. You got an X for every car sale, and the board could be a real motivator with a lot of peer pressure. If you sold the most cars for a given month, you were top of the board for the entire following month.

On December 1st, the board was erased. Every one of us was equal and I got off to an incredible start. By the 10th of the month, I had the most X's and more importantly, a lot of momentum. My boss called me to his office and said: "if you keep this up, your ass will be on the beach in Hawaii next month". I was stunned. It hadn't occurred to me I had a chance, but he broke the numbers out and sure enough, I had a chance, albeit a slim one. Still, it was enough to motivate me. I had only been on one plane trip in my life and it sure wasn't to Hawaii.

For the rest of the month, I got there early and stayed late. On Sunday when the dealership was closed, I spent 3-4 hours on the lot handing out business cards, inviting people to come in during the week. I was on fire the entire month. I held my lead over Wimp and Scott, but not by much.

The Hawaii contest ended on December 31st, which was a Friday. Scott and I were in a virtual tie for the trip. Even though I was ahead of him for December, that two-week head start he got in November was killing me. I sat down on the night of the 30th and came to the conclusion that Scott would probably sell three on December 31st, so to win the trip, I would probably have to sell six vehicles. I almost gave up. Selling six cars in a single day, and finalizing them, was an almost impossible task.

I got up very early on that last day and decided I would stop on the way to work and eat a big breakfast. If everything went right, there would be no time for lunch. I was at a place called the Circle Grill by 6:30 AM. I recall very well sitting at the counter and ordering an omelet with hash browns, a side of bacon, and white toast. There was an older gentleman sitting at the counter right next to me on a round stool, having breakfast while reading the newspaper. I remember his last name was Satterwhite.

We talked about what a pretty day it was, how good the food was, etc. I reached into my pocket and handed him my card. I asked him if he happened to know anyone in the market for a truck, and explained about the trip contest. The words out of his mouth made my jaw drop.

He pointed to the east and said "see that parts store across the street? I own that and my CPA told me to go buy three new delivery trucks today. I was going to go to the Ford dealership down the street when they open and purchase three Ford Courier pickups, but I'd just as soon do it with you." Ironically, the Ford dealership he was going to purchase at was the one I had left six weeks earlier.

I picked up his breakfast tab and he followed me to the dealership. He picked 3 identical small white trucks before 8 AM. We couldn't even get in the showroom, but luckily, the owner showed up early, and I got the paperwork ready. He signed and wrote out one check for all three trucks. I had a hat trick before 8:30 AM. When Scott got to work and found out I already had three out, he just looked deflated.

I got three more that day and Scott only sold one. I outsold Wimp for the month of December, something that had not been done before. I finished December with 36.5 sales (a half sale is when you and another salesperson split the commission on a deal) and that record not only got me a trip to Hawaii but a plaque I still have that proclaimed I held the all-time single month sales record. That record stood for many years and was still in place when the dealership closed years later.

In closing, the trip was awesome, but I got the worst sunburn of my life. I lost track of Scott, but Paul "Wimp" Childress passed away in November 2008 at the age of 72.