True Stories From A Former Car Dealer #17: The Sign 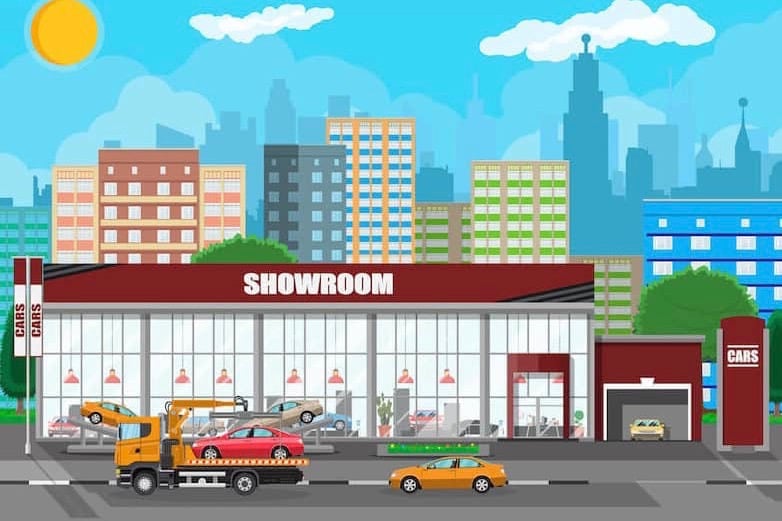 This story comes from the same time and same dealership I wrote about in segment #16, the EXP. As a reminder, the Ford dealership was on a major freeway, but the property was very narrow and hard to see. We could maybe put 25 cars across the front for viewing purposes, which is not a lot by most standards in the car industry.

We decided we would try to install a programmable sign, one of those on which you could change the message all the time. Remember that this was in the early to mid-1980s and electronic signs then were fairly primitive as compared to the signs you see today.

The highway the dealership was on was one of the most congested in Dallas, called Central Expressway, or officially U.S. 75. It was basically a parking lot most of the time, perfect for the kind of sign we wanted because people just sitting there would have plenty of time to read it.

In front of the dealership was the Ford brand sign, which at that time was rectangle shaped, not the oval you see today. The City of Dallas would not allow the large, programmable sign we wanted, it was against an ordinance to have two large signs in the small amount of frontage we had.

Ford Motor Company was, and probably is still, very particular about what could be done with its brand signs. The dealership has to pay for them and trust me, they are not cheap, and Ford has complete control of the brand signs. Nothing can touch one of the Ford signs, period.

This caused a major conundrum. We could not have a secondary sign by city ordinance, and could not build a sign touching the Ford brand sign.

Enter a gentleman named Mike who worked for Daktronics, the sign company we wanted to use. Their claim to fame was building high school and college scoreboards, but they wanted to get into dealership signage, recognizing the huge market potential for them. Mike and I met numerous times on how to get this done, and he came back with a plan.

Since it could not be attached, the new sign had to be designed to withstand the Texas winds and storms, so it had to move, which it did, sometimes to alarming positions.

The City of Dallas looked at the plan, which may or may not have appeared like it was attached to the Ford sign and approved the plans. I knew better than to ask permission from Ford Motor Company, so we just proceeded.

The sign went up and was an instant hit. I had the computer that programmed the sign in my office, and besides running constant time and temperature readings for the people stuck in traffic, I often had funny sayings or phrases running through the bright lights. Of course, I had vehicle specials there as well.

The sign had only been up about a week when I got the certified letter from Ford saying the sign violated the Ford sign compliance rules, and they cited the specific rule that nothing could be attached to the Ford sign. I politely wrote back and told them my sign was not touching their sign. Clearly, they did not believe me and sent someone to the dealership in a bucket truck to look. Sure enough, his report showed a one-inch gap between the signs. Ford Motor was not happy at all but technically could not do anything about it.

One memorable thing I put on the sign was the day in 1986 when the Space Shuttle Challenger exploded. I had a TV in my office and I was watching coverage of the trip. Just 73 seconds elapsed and I watched in horror as the spacecraft exploded. Within seconds of the tragedy, I turned around to the computer that ran the sign, took everything else off, and I simply put up:

Thousands of people learned of the tragedy from that message and tuned their car radios to news stations to find out what was happening.

Also in 1986, then-President of the United States Ronald Reagan launched an air attack on Libya. Everyone knew the tension was mounting between the U.S. and Libya, but the raid that was launched by the President came as big news. America watched as over 100 U.S. Navy and Air Force aircraft repeatedly landed bombs on Libya, including the headquarters of General Muammar al-Qaddafi. I will never forget that evening, I was at home eating dinner when the news broke. I left my dinner, went back to the dealership, and on the sign, again I took everything else off, and I simply put:

We had a lot of fun with that sign. Charities started to request that we mention events they were having, which we obliged. The sign became somewhat of a landmark for people. I kept it interesting enough that people couldn't wait to see what was up there and since they were just sitting in traffic anyway, and cell phones were just coming out, people got in the habit of looking.

Perhaps the most memorable message, and the one that got the most publicity, was in late 1986. Ross Perot Sr. had a company called Electronic Data Systems that was based in Dallas. Perot had agreed to sell his company to General Motors in exchange for stock in the car company and a seat on the Board of Directors.

Almost from the start, Ross Perot and GM Chairman Roger Smith butted heads on how things were handled at General Motors. Finally, in late 1986, Perot was ousted from the board at GM and was paid 750 million dollars for his company. The ouster and the ongoing feud was big news in the media, so since we were a Ford dealership, I once again took everything off the sign, and simply put:

That picture appeared on the front page of the business section of the Dallas Morning News the following day, in color.

Also on that day, my assistant called me and said “Ross Perot would like to speak to you.”  I thought for sure it was a prank call, but wasn’t sure enough to not accept it.  Sure enough, it was the real H. Ross Perot Sr. who was known for driving a 10-year old Impala, and for the private rescue of two of his executives in Iran.  Some six years later, he made a run at the Presidency.

He said to me: “Thanks for the welcome on your sign!  I may just come down there and get myself a new Crown Victoria.”  He never did, but his secretary called the following year and wanted me to sign a copy of the Dallas Morning News article to hang on his wall, which I happily agreed to do.

On a final note, the dealership was sold in 1987 and one of the stipulations for the new owner, mandated by Ford Motor Company, was that the sign be removed within 30 days of closing, and it was.