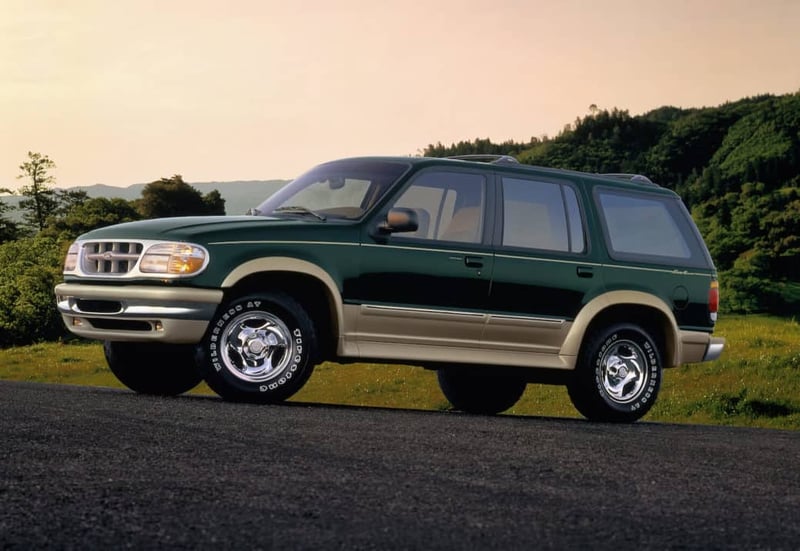 The Ford Explorer came out in 1990 as a 1991 model and was an instant hit. We could not keep them in stock and could not get nearly as many as we could sell. Sales were incredible the first dozen years or so of production, most years Explorer sales were roughly 400,000 vehicles.

Starting in about 1997, most Ford Explorers came with Firestone Wilderness AT tires. At that time, the State of Arizona noticed a high instance of Firestone tire failures that resulted in rollovers, and Firestone agreed to make the suspect tires more heavy duty. In 1998, State Farm insurance saw a trend of claims paid for accidents caused by Firestone tires blowing out. That same year 46 people in Venezuela died who were riding on Firestone tires, and a Ford dealer in Saudi Arabia began replacing any Firestone tires in his new inventory with other brands.

By early 2000, the death toll of Ford Explorers with Firestone tires was rising. Houston TV station KHOU ran a nine-minute story about 30 people in Texas who had died with the Explorer/Firestone combination and that set off a chain reaction of concern, and sometimes panic, for Explorer owners. In August of 2000, Firestone recalled 6.5 million of the suspect tires.

The Ford and Firestone relationship went back 100 years or so. However, there was tension between the almost century-old companies. Firestone said Ford's recommended tire pressure was too low and the Explorer was designed poorly. Ford countered with facts to show that Explorers with Goodyear tires were not rolling over.

I became the Ford National Dealer Council Chairman in 2000, and in that position, I was briefed daily on where Ford stood on the Firestone issue. I typically sold over 100 Explorers per month and was concerned for my customers. I made the decision in August of 2000 that I was going to remove all Firestone Wilderness tires from vehicles in my inventory. CNN did a story on the subject:

While Ford, Firestone, the NHTSA, and other agencies and attorneys continued to investigate, people kept dying. Only one thing was clear: The worst problems in the U.S. were confined to Arizona, Texas, and Florida. Outside the U.S. Saudi Arabia and Venezuela were having the majority of deaths. The common denominator? Extreme heat.

Ford Explorer rollover accidents led the news nightly for weeks. I had calls from people who refused to drive them anymore. Some traded them in on other vehicles, some bought different brand tires and paid for them. I was inundated with interview requests from major networks and local news agencies.

In mid-May of 2001, I had won a huge Ford award for customer satisfaction called the Chairman's Award. This was the pinnacle of awards and it was especially hard for large volume dealers to win. The celebration was going to be held in Florida at the Ritz Carlton hotel in Naples. To be honest, I was tired and very much looking forward to a few days of relaxation.

There were delays due to weather leaving DFW airport. The delays turned into hours, but I finally completed the journey after midnight. I got to the hotel between 1 AM and 2 AM, but the next day was a free day, or so I thought.

As I walked into the empty Ritz lobby to the reception desk, the lone receptionist said:  "I have an urgent message for you". Those are not words you want to hear. She handed me a note from Ford CEO Jacques Nasser. It was short and it just simply said to call his room, no matter what time I get in and he signed it simply - Jac. There was a phone in the lobby so I called the CEO. We had our share of battles, and he had made it known that he disliked some of my comments about Ford buying dealerships to operate, cutting out the Ford dealers, but that is a different true story episode. Suffice it to say, we were not chums.

I called and could tell I woke him up. He said can you meet me in our conference room at 8 AM with some of my management team, we are going to have a conference call with Bill Ford, the Chairman Of The Board of Ford Motor Company. I agreed to be there but did not have a clue what the subject was.

After a few hours sleep, I went to the meeting room and seated were all the top brass at Ford. Jac Nasser came in a few minutes late carrying a stack of file folders about a foot high, maybe more. He directed a staffer to get Bill Ford on a speakerphone in the middle of the tables that were arranged in a square. While they were making the connection, Nasser looked up and simply said: "we got 'em". Someone in the room, not me, asked: "got who?". He simply replied "Firestone".

When Mr. Ford got on the phone, Jac Nasser explained to us that Ford auditors had irrefutable proof that the Explorer rollover issue was caused by the tires. They had the dates the bad tires were made, the exact manufacturing plant and the cause, which was faulty glue holding the belts to the sidewalls. In extreme heat, like in Texas, Florida, and Arizona, the bad glue would break down, causing the tires to separate and blow out. There was no doubt the information was correct, I saw it myself.

What happened next was a major shock to me. Nasser said "we are going to immediately recall all Firestone Wilderness tires on Ford Explorers. Every customer will get a new set of tires, no charge to them for labor, balancing, or any other associated costs. They will even get a new spare tire."

Someone in the room asked about how many tires we were talking about here. Nasser said there were 13 million Firestone Wilderness tires on Explorers and it would cost Ford 3 billion dollars to do the recall. I'm confused now. Why would Ford spend 3 billion dollars on a recall that they knew was the fault of Firestone?

On May 22, 2001, the recall was announced. The replacements were being done at Ford dealerships all across America. At my dealership, we hired extra personnel so we could install Explorer tires from 7 AM to midnight, non-stop, six days a week. We had one lane on our service drive dedicated just to people coming in for this recall. It was months and months, possibly even a year, before we got to everyone to whom we sold Explorers, as well as people who had purchased them at other dealerships.

Lawsuits were flying. It was estimated Ford settled 1500 lawsuits at a cost of 600 million dollars and Firestone set aside over 800 million dollars to settle the suits in which it was named, not counting a massive class-action suit that was filed. The U.S. Congress started to investigate the Explorer/Firestone issue to see what was done and why it took so long. Jac Nasser called me and asked if I could come to Washington to testify. I went, but was never called upon.

When the smoke cleared, 271 people died and another 823 were injured in Ford Explorers with Firestone tires on them, and that was just in the United States. Ultimately, the government closed its investigation, coming to the same conclusion Ford did, that it was a tire issue.

Still, the question lingered for me as to why Ford shouldered the financial burden of the huge recall, although later on in a settlement, Firestone reimbursed Ford a portion of what it was out. Still, in my eyes, it made Ford look guilty when it was not.

Confidentially, I asked a Ford executive friend years later why Ford did the recall instead of Firestone, spending the 3 billion dollars. The man, whom I will never identify, simply said: "sometime, look up who is in Bill Ford's family. The answer will come to you."

Everybody knew Bill Ford was the great-grandson of Henry Ford, the founder of the company. His father was William Clay Ford, Sr. What I did not know, however, was his mother's maiden name was Martha Firestone.