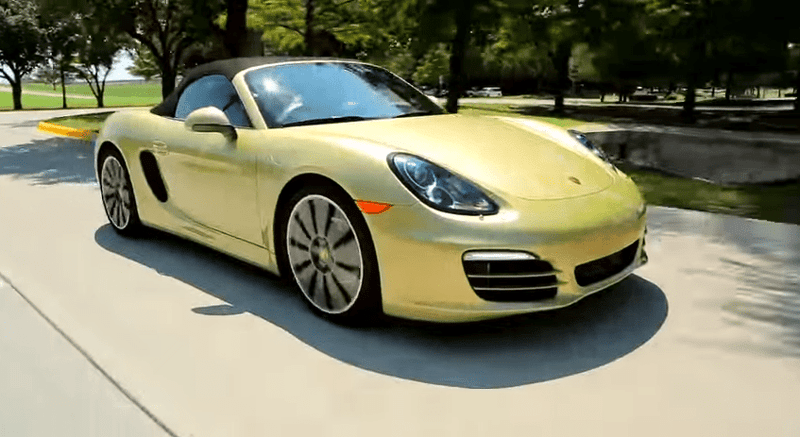 The first Porsche Boxster hit the United States in 1997 with a bang, and quickly rose to be the Porsche volume leader for a number of years. Now comes the all-new 2013 Porsche Boxster convertible, the third generation model and it has a ton of improvements.

Porsche started by making the Boxster on a longer wheelbase to add stability, and for room they made the body longer with new lines, yet kept it true to its roots. Although it looks different than the 2012 Boxster, you know at a glance exactly that it is and you can still see a lot of the 911 in the Boxster.

I often talk about what is under the hood, but that doesn’t apply here since the Boxster is a mid-engine car. In that compartment you’ll find the new 2.7-liter six-cylinder that is more fuel-efficient yet still carries 265-horses. Also new for 2013, a 7-speed automatic transmission that shifts smoothly both moving up and down the gears.

Handling is typical Porsche, it feels like you are riding on rails as you corner with the Boxster. Although Porsche has taken some heat for switching to electric steering, I actually found it to be fine and not a distraction in the least. Changing the steering was one way to make the Boxster lighter. There is also a lot more aluminum in the body to lighten it, but honestly you do not detect this in the ride, drive, or handling. The interior is terrific and has been redone to allow taller drivers to be more comfortable. The dash is very well laid out and everything is easy to operate. My Lime Gold tester is completely loaded including options such as air conditioned seats, navigation system, 20” wheels, Bose Surround Sound, a terrific sport steering wheel, and park assist. There are a ton of options available, but WOW does it run the price up fast. One worthwhile option is the Sport Chrono package, which is $2370 and adds a neat element to the car. It includes dynamic transmission mounts to make the car upshift and downshift quicker and smoother. You also get a lap timer, adjustable chassis settings which really make a difference, and it comes with launch mode, which is great for putting the car through its paces from a dead stop.

The Boxster comes with storage in front and back. The back storage is still good even when the soft convertible top is down. Both front and rear “trunks” can be opened with the key fob. And speaking of the top, the 2013 convertible top is thicker for sound deadening purposes, and it will disappear in under 10 seconds. Somewhat amazing to me, is Porsche says you can drop the top while moving at speeds up to 30-miles per hour, but I will pass on testing that.

Porsche offers the Boxster in an S model which will take you up to a 3.4-liter six cylinder, but I am not sure why anybody would pay the extra money for it. The base model Boxster seems much faster than it is, and best of all, it feels, sounds, and handles like a Porsche.