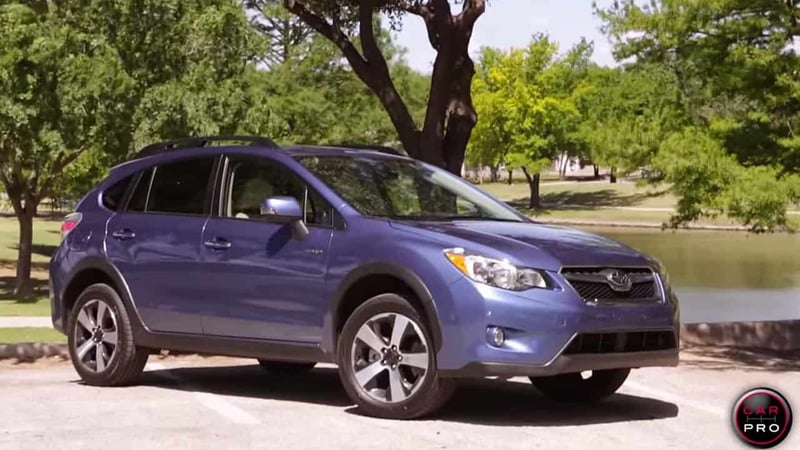 Let’s face it, not every automaker is great at everything it does. When you say safety, you think Volvo. When you say hybrid, Toyota comes to mind. When you think all-wheel drive, Subaru jumps into your head. So what happens when you try to be all things at the same time, like the new 2014 Subaru XV Crosstrek Hybrid Touring? You come up short.

It is no secret that I am a big fan of Subaru. Their Symmetrical All-Wheel System is the envy of the auto industry. I wonder if Subaru was embarrassed by the fact that it didn’t offer a hybrid in the United States and decided the Crosstrek was the one to experiment with? Back to the drawing board,boys.

Let’s pretend for a moment this Crosstrek is the 2.0-liter non-hybrid version and just talk about the vehicle for a second. First and foremost, it is a Subaru with a nice ride, superb handling, and a great interior, not to mention an outstanding value. Very typical of all Subarus, no surprise here.

The interior is beautiful, and everything is well laid out for driver control. It has all the latest safety features, including a driver’s knee airbag. There is good headroom and legroom in the Crosstrek, and overall it is a joy to drive.

So, now let’s add in the element of it being a hybrid. This is where everything falls apart. An electric drive motor augments the standard 2.0-liter Boxer engine. The electric motor adds 12-horses for a total of 160 total horsepower. Crosstrek has a terrific continuously variable transmission that has been a real workhorse over the years. The first CVT I ever drove was, in fact, in a Subaru, the year was 1985. They’ve got this CVT thing down to a science.

One of my big complaints on this hybrid is it is grossly underpowered. Contrary to popular belief, hybrids can actually be quite powerful. The battery pack in the Crosstrek weighs almost 200-pounds, raises the rear cargo area, and eliminates the spare tire. They probably should have put a little more thought into this. You do get the start/stop technology that kills the engine at a red light while leaving everything else on. This system is a very rough and annoying for me. It shakes the entire vehicle when it engages.

Crosstrek will go up to 25-miles per hour for short distances running on just the batteries with good weather conditions. While that is admirable, it is very much behind most competitors that will run on battery at higher speeds and for longer.

OK, we know now I don’t like the hybrid version, and maybe I am being too hard on it. Thrifty shoppers may be wondering how much pain at the pump can be eliminated. More bad news…you don’t gain any mileage on the highway from the regular gas engine, but you gain 4-miles per gallon in just city driving. Let’s look at the numbers for a typical driver.

The formula here is 15,000 miles per year for the average driver. Let’s say half of that is city driving and half is highway. We’ve established there is no fuel economy benefit on the highway miles, so what can we gain in the city driving? At 25-miles per gallon with the all-gas version, your yearly gas expense is $1056 based on gasoline prices of $3.50 per gallon. With the hybrid, that drops to $900, so a net savings of $156 per year. That sounds OK until you realize the upcharge for the hybrid is $4000. All you have to do is keep this hybrid for 25 years and 7 months and you’ll have all your money back! Such a deal, huh?

If this were the gas-only version of the XV Crosstrek, I would be telling you to rush to your nearest Subaru dealer. As a hybrid, it is a failure.