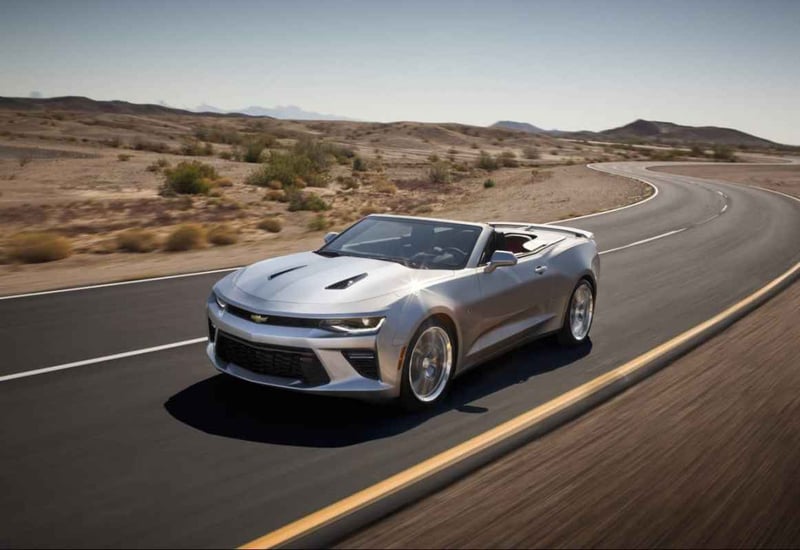 This week, I am behind the wheel of the just released 2016 Chevy Camaro convertible.

As a quick history lesson, the Camaro came out in 1967 to compete with the Ford Mustang and this is the 6th generation Camaro from Chevrolet.The first convertible version of this car came out in 1969. The Camaro was discontinued after the 2002 model year, but was re-introduced in 2010.

This 2016 model is about 2.5 inches shorter and sits about an inch closer to the ground. It is based on the Cadillac ATS chassis, which I loved when I reviewed it. The interior was redone for 2016 and Camaro shed almost 400 pounds.

You have three choices under the hood. New for this year is a 2-liter 4-cylinder turbo, the first turbocharger ever offered in a Camaro. You can also jump up to a 6.2-liter V8 in the SS, and you’ll get the 455-horse engine that comes in the Corvette.

The third choice is the one I am testing, which is the 3.6-liter six cylinder, which is probably by far going to be the most popular engine in this car. It puts out a terrific 335-horses, and has 284 pound-feet of torque. My test vehicle has an 8-speed automatic transmission, but there is a 6-speed manual available too.

Checking the 0-to-60 times, 5.1 seconds was the best time I had, but I was pleased considering it is a six cylinder.

The chiseled exterior appearance of the Camaro with the RS package is super good-looking, top up or top down. The 5-spoke 20” black wheels, rear spoiler, the RS grill, and HID and LED headlights give this car the look of a big V8 muscle car and is sure to turn heads.

As you open the door, you are reminded that all the ragtops in this class have small interiors, lack headroom, and the rear seat is suited only for children. The interior is tight and doesn’t have a lot of storage.

This is the 2LT package, which is next to the bottom of the line 1LT, so I had no expectations for luxury, but was surprised how beautiful the Ceramic White accents on the seats looked.

From behind the wheel, the gauges are easy to read and see, and in the middle is a driver information center that is programmable and gives you a ton of information.

In the center of the dash above the shifter, is the 8” color touchscreen that houses all your apps, Bluetooth, and the stereo controls. The Camaro comes standard with Apple Car Play, which is a great system to integrate your phone with the car. You can also use the 4G LTE Wi-Fi hotspot that is built into the system, and like OnStar, it is available as a subscription for a monthly fee after an initial trial period.

One really cool feature of this new Camaro is the air conditioning controls. There are two large, round vents in front of the shifter, surrounded by big chrome bands. You turn those to adjust the temperature on each side of the car, thanks to the dual climate controlled air.

This 2LT package comes with a lot of standard features. Most notable are push button start and passive keyless entry, dual power front seats that are both heated and air conditioned, Bose stereo, a flat-bottom leather wrapped steering wheel with controls, and a rearview camera.

This week’s review car has the RS package, which is $1950 and includes the 20” wheels, HID headlights and LED front and rear lights, and a rear spoiler. The upgrade to the V6 and automatic transmission is $2990, and for $895, you get a dual-mode performance exhaust system that makes the car sound like a big V8.

For just $495, you get the MyLink system that gets you navigation and Bluetooth streaming.

It also has the $2800 Convenience and Lighting package which includes heads-up display, wireless cell charging, blind spot monitoring-which is a must in any two door car-heated steering wheel, rearview camera and rear park assistance.

Let’s talk about the convertible top for a moment. It is heavily insulated and creates a very quiet cabin. It operates exactly like my Corvette, with the trunk opening from the front, the top going into the trunk, and then a nifty cover goes down to completely hide the top.

You can operate the top up or down at speeds up to 30 miles per hour, and perhaps the neatest thing is you can lower the top from the key fob. The top will go down in about 12 seconds, and just 14 seconds to put it up. This top operates as well as any I have ever been in.

The Camaro handles very well, corners great, and you can configure the suspension to snow and ice, Touring, and sport modes.

Also pleasant is you don’t get the typical shakes and vibrations often associated with a convertible, and at highway speeds, top down, you can actually have a conversation in the car. Gas mileage is really good at 19 in town, 28 on the highway, and 23 overall.

MSRP with options is just over $47,500 on this Hyper Blue Camaro, and I find the price to be a good value. I like this six-cylinder as a great combination of power and fuel economy.