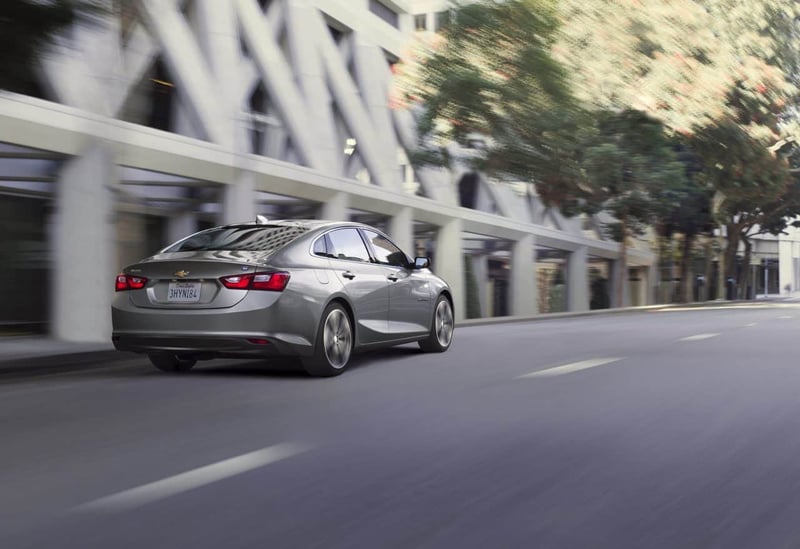 This week I bring you the 2016 Chevy Malibu Hybrid, a much improved and much better looking midsized sedan than the 2015 model. This is the 9th-generation of the Chevy Malibu that started out in 1964 as the top-of-the-line Chevelle model.  Over time, the Malibu became known as a fleet or rental car, but this 2016 will likely put an end to that.

First off, it is 4 inches longer, it’s wider, it has a longer wheelbase, and while it was getting bigger, it shed 300 pounds.  The 2016 has much more technology and a much more chiseled exterior.  In fact, at first glance, the new Malibu doesn’t really look like a Chevrolet, I find it reminiscent of a Lexus.

The Malibu hybrid comes with a 1.8-liter 4-cylinder engine and two electric motors that combine to put out 182-horses.  It also has a 2-mode automatic transmission.  One mode is to maximize fuel economy and power at low speeds, while the other works at high speeds.  Although GM doesn’t call it a CVT, it works similar to one.  The transmission is smooth to the point that you barely notice it.  The Malibu hybrid will operate on battery-power up to 55-miles per hour, which is pretty amazing.

The 2016 Malibu comes in four trim levels, but the hybrid only offers one, and you can start adding options from there.  The interior is nice, but is very dark on my test vehicle, and borders a bit on the plain Jane side. While there is some noticeable plastic, most of the areas you actually touch are soft.  The cloth seats are comfortable and appear to be very durable as well.  The center console is nicely done, and I love the old-school knobs for the air conditioning and radio volume.

The driver’s gauges are easy to read and there is a color driver info center right in the middle.  The leather steering wheel comes with a ton of controls and makes it really easy to operate features without taking your eyes off the road.

There is an 8” color touchscreen that operates the Chevy MyLink system to hook up your telephone to Bluetooth, and you can activate Apple CarPlay or Android Auto depending on your phone.  You also operate the AM FM SXM radio, turn on the 4G LTE hotspot, use Onstar turn by turn navigation, and configure the settings of the car to fit your needs.  This new Malibu has increased legroom for front and rear seat passengers, thanks to the longer length.  The rear seats will fold down to make the trunk space even bigger, but you do lose some room to the hybrid battery pack.

Here are the most notable standard features on the 2016 Malibu: you get 10 airbags, rearview camera, keyless entry, power seat with power lumbar support,  17” wheels, automatic headlights, and theft deterrent system.

If your kid likes to borrow your car, this Malibu will be his or her worst nightmare.  In the settings on MyLink, you can set up Teen Driver, which can only be changed by your use of a personal identification number you choose.  The settings take effect when you hand your kid, or a valet, a particular key fob.

From there, parents can learn how far he or she has driven, how fast they've gone, and how many times he or she braked hard.  Teen Driver automatically mutes the radio until front safety belts are fastened. Additionally, the radio system’s maximum volume can also be set. The system will make sure all safety features are automatically turned on. Parents can select a maximum speed between 40-75 mph, which, if exceeded, activates a visual warning and audible chime, letting the teen know that the info will be recorded on his or her driving report card.  This could be a lifesaver.

The only other option group is the Convenience and Technology package, and for $895 you get remote start, the 8” color screen I mentioned earlier, wireless phone charging, a leather steering wheel and shift knob, and a 110-volt electrical outlet.

The 2016 Malibu really drives and handles well, and I was surprised at the acceleration it has considering it is a hybrid and it weighs over 3000 pounds.

Fuel economy is exceptional; it is getting 47 city and 46 highway, for a combined 46 overall.  At times I am actually getting better.  As I normally do, I looked at the math on the hybrid versus the 4-cylinder gas engine.  For the average 15,000 mile per year driver, if gas stays at $2 gallon, it will take 13 years to break even on the hybrid.  If gas goes to $3 per gallon, it only takes 8 years and should gas go beyond that, it wouldn’t take long for it to pay for itself.

The Malibu hybrid at 46 combined beats the Toyota Camry hybrid at 41 mpg combined, Ford Fusion at 42, and comes in just under the 2017 Honda Accord hybrid, which is rated at 48 combined.

Coming in at just over $31,700 on the window sticker, given the size of the Malibu, the safety features, and the fuel economy, I find it to be an exceptional value.

As a side note, the Malibu hybrid has many of the same powertrain components of the new Chevy Volt I reviewed recently, and if you are interested in the gas version of this car, I reviewed it also. You’ll find both reviews at www.carprousa.com.