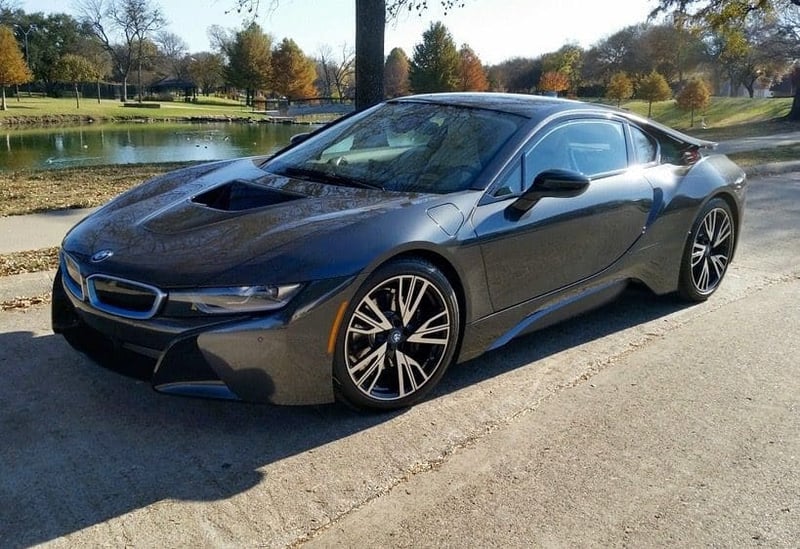 Severely slinky cars that make me crawl just to get in kind of intrigue me – even if they appear bound for Mars.

Heck, you should see some of my dates.

When a car stands lower than a politician’s scruples, cheating the wind with carbon fiber and a profile straight out of Star Wars, what’s not to like?

Here’s where it gets really weird, though, kids: This highly alluring car is a plug-in hybrid, a distant cousin of the sleep-inducing, save-the-whales Toyota Prius.

Darn. I fear I may be getting modern.

Blame it squarely on the 2017 BMW i8, a sleek, distinctive semi-exotic with two tires in the 2020s and two in outer space.

As you probably know, hybrid technology began migrating to high-end sports cars a few years ago, with brands like Ferrari, Porsche, Acura and others employing it to burnish their green credentials as well as their performance.

In fact, though hybrid sales remain miniscule, I expect every new vehicle in the U.S. to be whirring and humming with some sort of hybrid technology by the 2020s – thanks mostly to government edict.

Although I hesitate to call the BMW i8 a true exotic like the ferocious new Ferrari 488, it darn sure dresses the part.

Super low-slung and swoopy with scissor doors, the metallic gray i8 I had scowled at lesser vehicles with squinty headlamps and knee-level BMW kidney-bean grilles.

A long, sloping hood curved up into a raked-back windshield, while the car’s sides sported slight curves to muscle them up a bit.

Meanwhile, my razor-cut space-alien settled tightly on 20-inch 10-spoke wheels shod with semi-skinny 215/45 tires up front and 245/40s in back – probably for fuel-economy and aerodynamic purposes.

Of course, the i8’s scissor doors – which swung up in opening rather than out – garnered most of the attention, not to mention knowing smiles from chiropractors everywhere.

I was more impressed with the car’s gracefully curved top whose edges rose slightly above the car’s spiny rear fenders like wings at rest.

That sci-fi body, incidentally, probably concealed enough technology for a visit to Mars.

In back, a tiny 1.5-liter turbocharged three-cylinder engine spun a more or less conventional six-speed automatic, while in front, a permanent-magnet, synchronous AC motor drove the front wheels.

Together, they produced 357 horsepower and 420 lb.-ft. of torque, which really doesn’t sound that impressive in a 3,500-pound car – until you bury the throttle.

Drive it like an adult in “eco” mode and the i8 whispers around town like any hybrid, starting and running silently to about 30 mph, when the little gas engine kicked in.

You could transport your friends from Greenpeace in that mode, impressing them further by hitting a button on the console for the all-electric mode, good for a total of 15 miles.

However, I highly recommend you bypass all those Disney channels for the adults-only sport mode, which relies mostly on the gas engine for motivation with regular sharp performance boosts from the electric motor.

A muted little growl breaks the silence as the car gets slung away from stops on a wave of torque that grows seriously insistent if you keep the pedal to the metal.

Sixty miles per hour flashes by in a fleet 4 seconds, according to Car and Driver, and 100 mph arrives in less than 10 seconds.

In hybrid-electric mode, the i8 gets 76 miles per gallon, but in more aggressive gas-electric driving, you will likely see 28 mpg – both good.

As you might expect in a mid-engine sportster, the i8 turned into corners with a vengeance, staying flat and steering lightly, while the ride tended to be fidgety and firm with lots of clomping.

That wasn’t particularly surprising given the i8’s sporty mission.

First, though, you’ll need to get in the car to experience anything – and that can be a challenge.

The luscious pleated white bucket seats in my i8 rode on a floor pan slightly below the car’s doorsill, which was about six inches wide.

I usually opted to just fall in after ducking low to miss the open door and then clumsily collected my limbs once I got in. Getting out meant draping my legs over the sill and pushing out with my elbows.

It got pretty tiresome after a few days, so I considered just staying inside the $153,000 car, where a graceful, pliable black dashboard featured a display screen that looked like an iPad.

Although the car had something called “active driving assistant,” I never saw him or her. I presume that referred to the usual side, rear and lane-departure warnings.

While the i8 technically had a nicely stitched back seat, no adult I know could fit back there – including me.

Is that even realistically possible? I don’t know, but it sure looks good slipping low and lean through traffic. 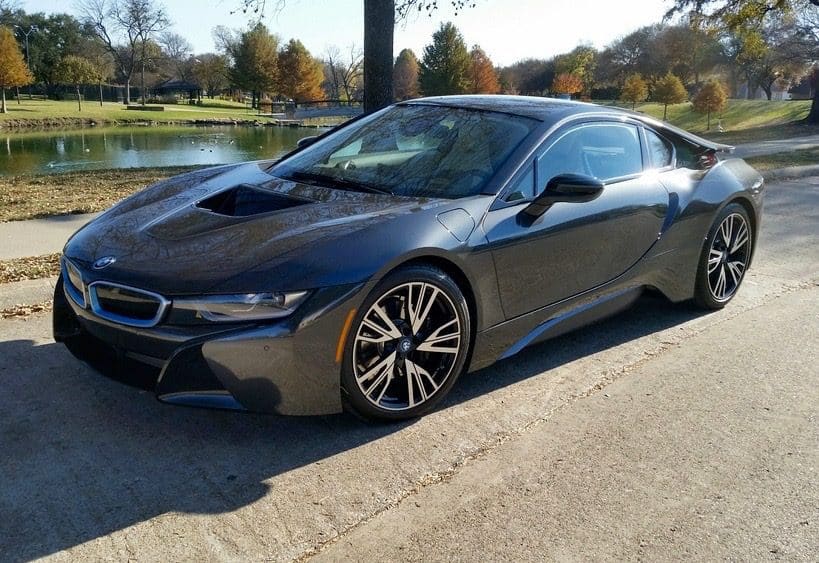 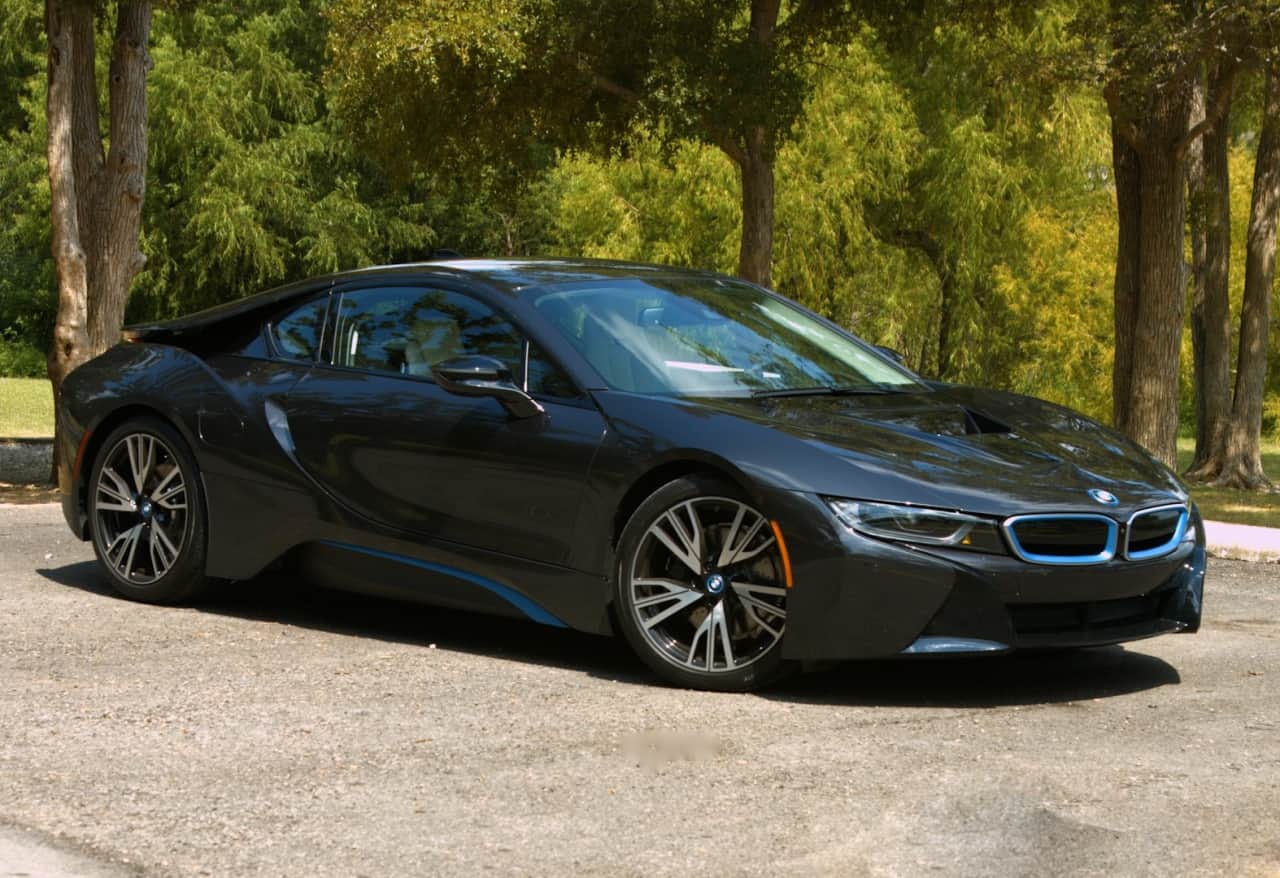 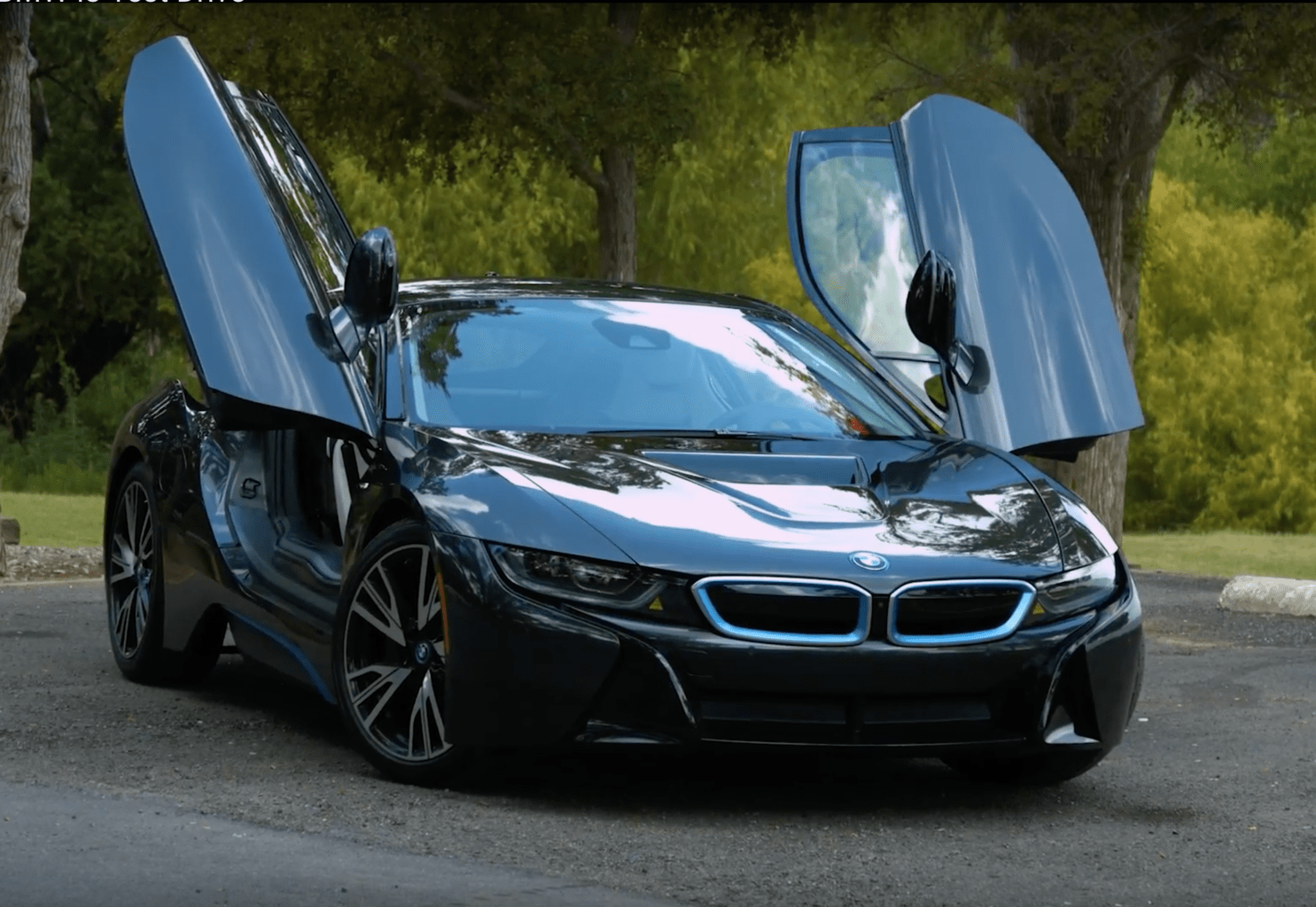 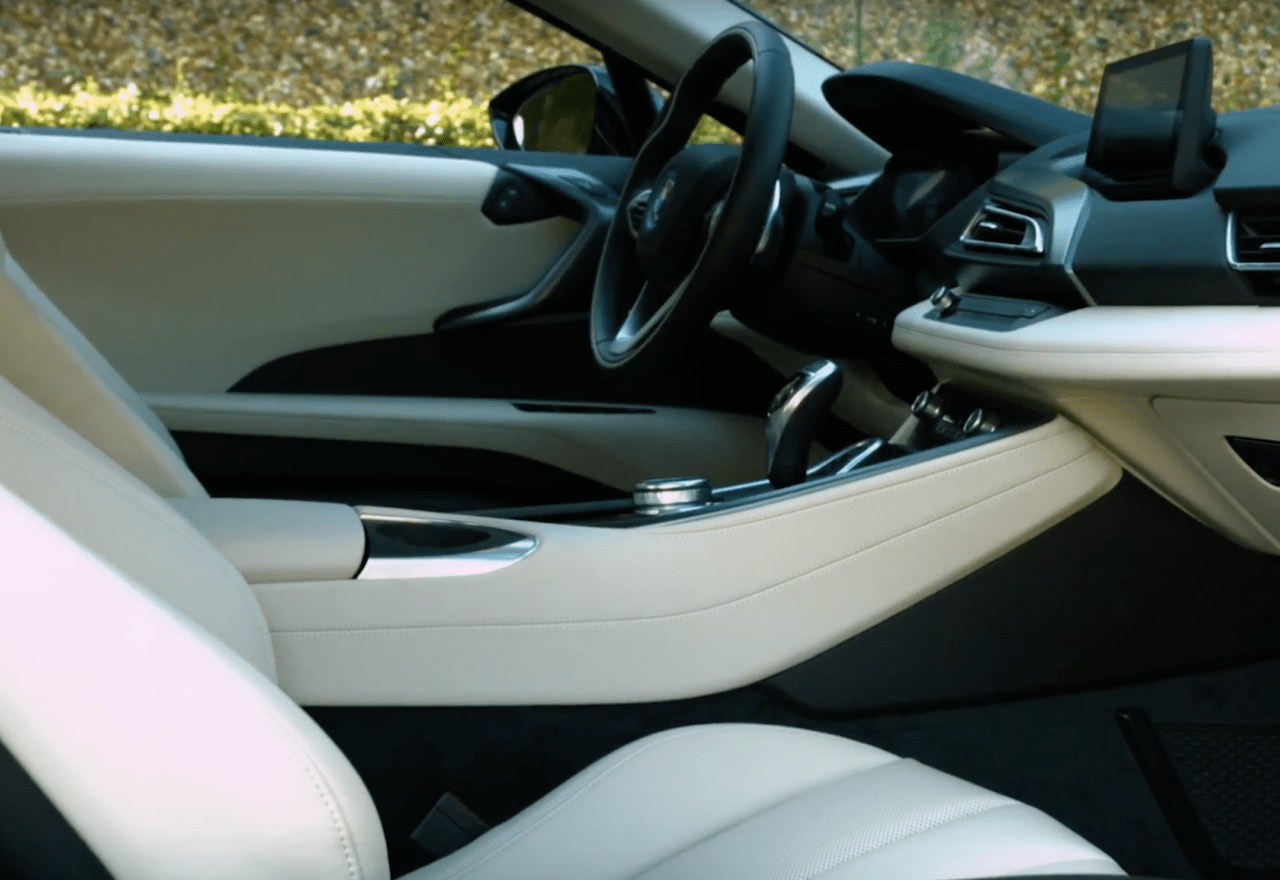 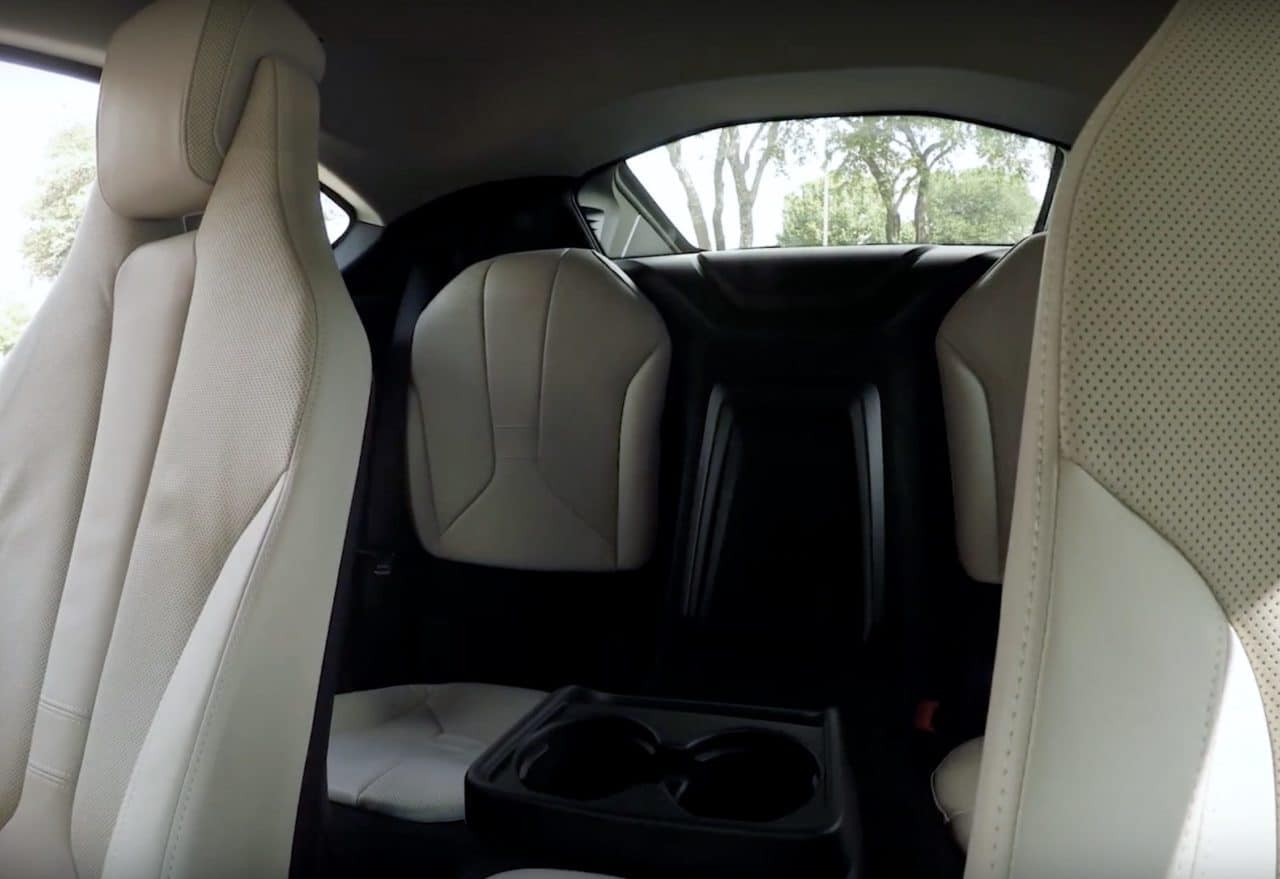