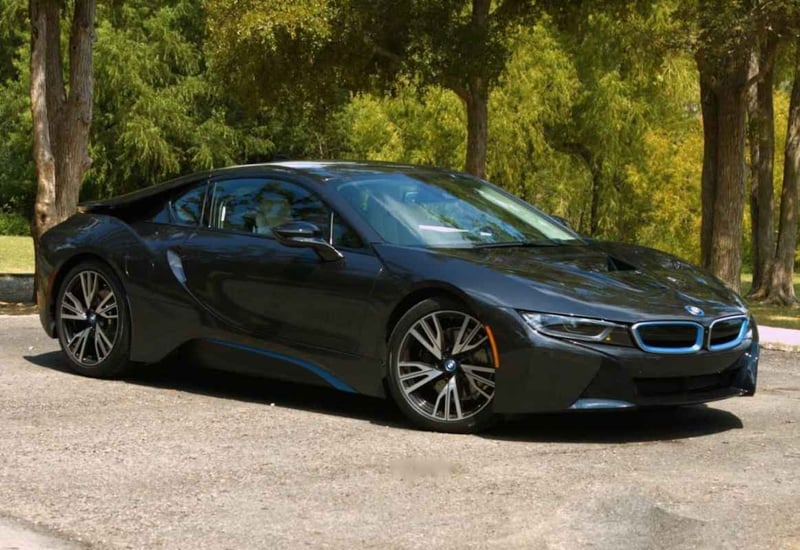 This week I bring you the 2017 BMW i8, a gas/electric hybrid that is a technological marvel of a sports car.  Essentially the i8 is a look into the future of BMW and probably many other vehicles.

The exterior of the i8 is like no other car on the road, and of all the cool cars I have reviewed, I don’t think any of them has ever attracted as much attention as this one.

As you walk around the i8, it is unique from every angle.  It’s clearly a BMW from the front, but the wraparound front fascia gives it a bit of a Darth Vader look.  The huge vented hood is unusual, to say the least.

From the side view, you get a great look at the 20” alloy wheels that are set out to the corners of the car.  You’ll notice the car was designed for airflow where the roofline meets the rear quarter panel above the back tires.  If you look closely, there is more airflow below the door in front of the rear tire.

Every angle and curve on this BMW was designed with the purpose of deflecting air.

From behind, the i8 is angular, with cool u-shaped taillights and blinkers above that.  The rear glass pops open to allow access to the storage area.  Every angle and curve on this BMW was designed with the purpose of deflecting air.

Enough on the exterior looks, let’s talk about what powers this beauty.

In the front of the i8 is an electric motor that is powered by a 7.1-kilowatt lithium-ion battery that drives the front wheels. In the rear of the i8, there is a 1.5-liter 3-cylinder twin-turbo gas engine that powers the rear wheels. So this BMW is all-wheel drive, just powered two different ways.

The electric motor produces 129-horses, the gas engine puts out 228-horses, so when both are running you have 357-horses that will get you from 0-to-60 in just 4.2 seconds. The i8 has a top speed of 155 miles per hour.  Most impressive is that this gas/electric combo has 427 pound-feet of torque.

Most impressive is that this gas/electric combo has 427 pound-feet of torque.

Let’s go to the interior now.  To do that, you pop open the electric scissor doors that open up and out toward the front of the car, exposing an exceptional interior.  This is also the time you realize that getting in and out of the i8 is going to be a challenge, but once seated, it is extremely comfortable.

The gauge cluster is high-resolution and changes colors depending on the drive mode you are in.  It also lets you know how much gas you have left and how much battery power you have left.  As you look through the windshield, there is a bright, colorful, head-up display.

The center console i8 has two glove boxes, your gear shifter, the pushbutton start, and buttons to turn off the traction control, change the drive modes, rearview camera angles, and turn off the parking sensors.

A large round knob on the right side of the shifter operates the BMW iDrive system.  This is the central operating system for the multimedia operation along with the radio, Bluetooth, navigation system, the office apps, connected drive system, vehicle information, and the car’s settings.

One of those screens is especially useful when driving: The e-Drive screen shows a graphic of the i8 and whether you are running on battery or gas, and when the gas engine is charging the batteries.

There are dramatic differences in performance between the four modes.

Some years ago, the iDrive system was known to be slow and difficult to operate, but today it is much better and much simpler.  From the top of the iDrive controller, you can use it as a notepad to enter info like an address for the navigation system, by using your finger to write each letter.

Comfort mode offers a balance between sporty performance and fuel efficiency. Sport mode features the intense boost function provided by the electric and gas motors together. Eco Pro mode is for a more efficient driving style that can be used in both all-electric mode and hybrid mode. Finally, e-DRIVE mode is purely electric, offering a max range of up to 15 miles and a maximum speed of 75-mph for a totally tailpipe emission-free ride.  E-Drive is engaged from a button under the pushbutton start.  Just be aware that this cuts the air conditioning way down and makes it pretty warm inside on a hot day.  When you are in Sport mode, it continually charges the hybrid batteries.

Sport mode is engaged by moving the gear shifter to left while in drive.  A cool feature I’ve not seen before is if you decide to go to Eco Mode from Sport Mode, the i8 moves the gear shifter back to the right, automatically.  There are dramatic differences in performance between the four modes.

All in all, the interior is terrific.  There is a back seat, but really it is just for very small children or additional storage.  There isn’t much trunk space in the i8, so be aware of that if you plan to take trips.

The BMW i8 comes completely loaded with everything you can imagine including the Harmon Kardon sound system and a host of safety features.

The i8 drives and handles as good as it looks.

A quirky thing on this car is when you are in Sport mode, artificial sound is piped in through the rear speakers, which sounds cheesy, but the reality is that it sounds so good you won’t care.  Another oddity is the front windows won’t go all the way down for some unknown reason.

The i8 drives and handles as good as it looks.  It is difficult not to stay in Sport Mode as well as this car performs, but even when running on just batteries, it is a joy to drive.

Fuel economy is rated at 28 combined city highway on gas only, and 76 city and highway when running on both gas and electric.  Charging times are quick on this car requiring just 3 and a half hours with a regular 110 outlet, but with a 240 outlet, that drops to just an hour and a half.

MSRP on this beauty is $152,695, which puts it in line with a loaded Tesla Model S P100D.  This is not a car for everyone of course, but it is comforting to know that as we transition to more electric cars, we don’t have to give up performance to do so. 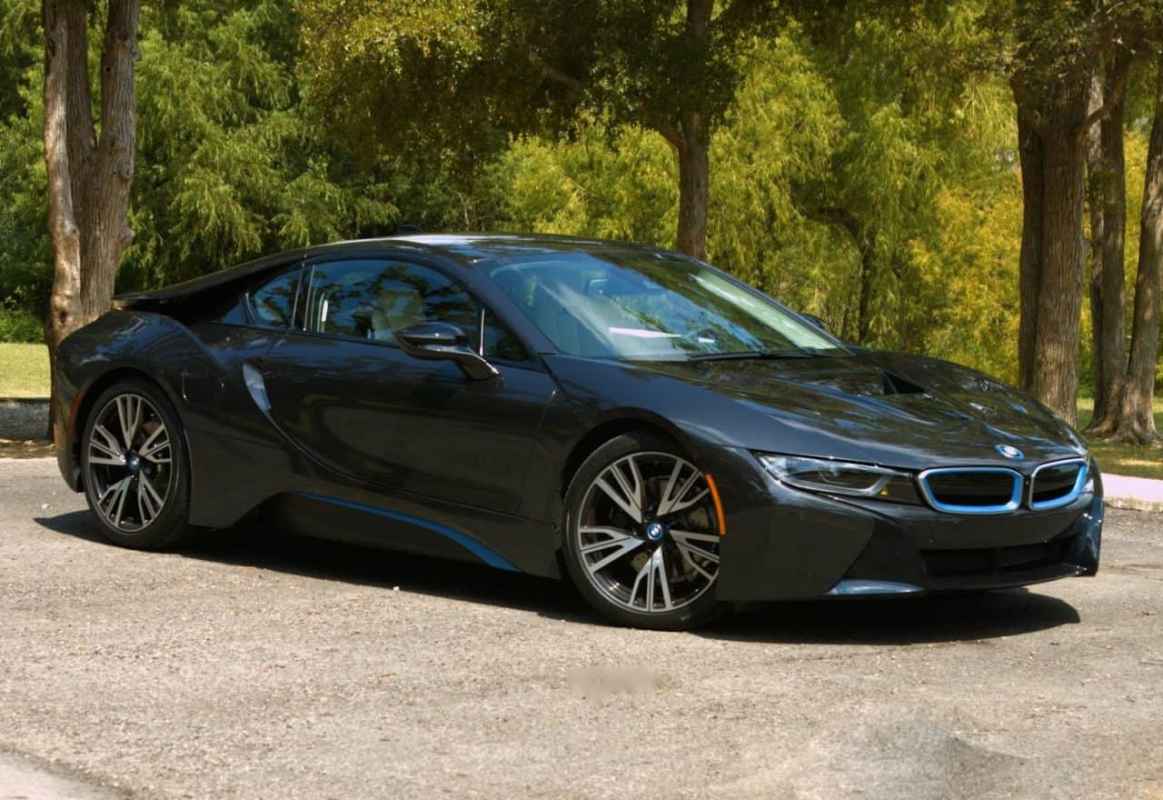 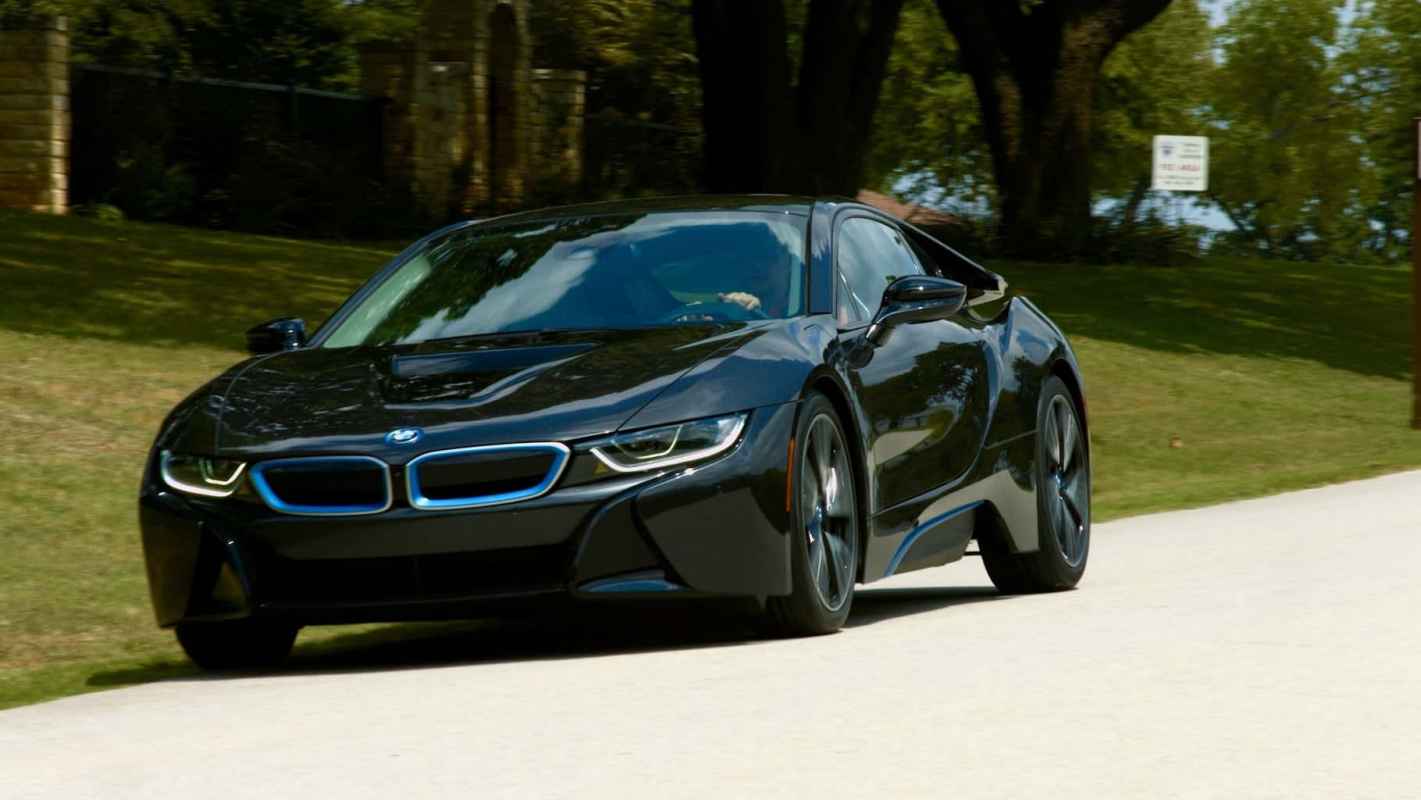 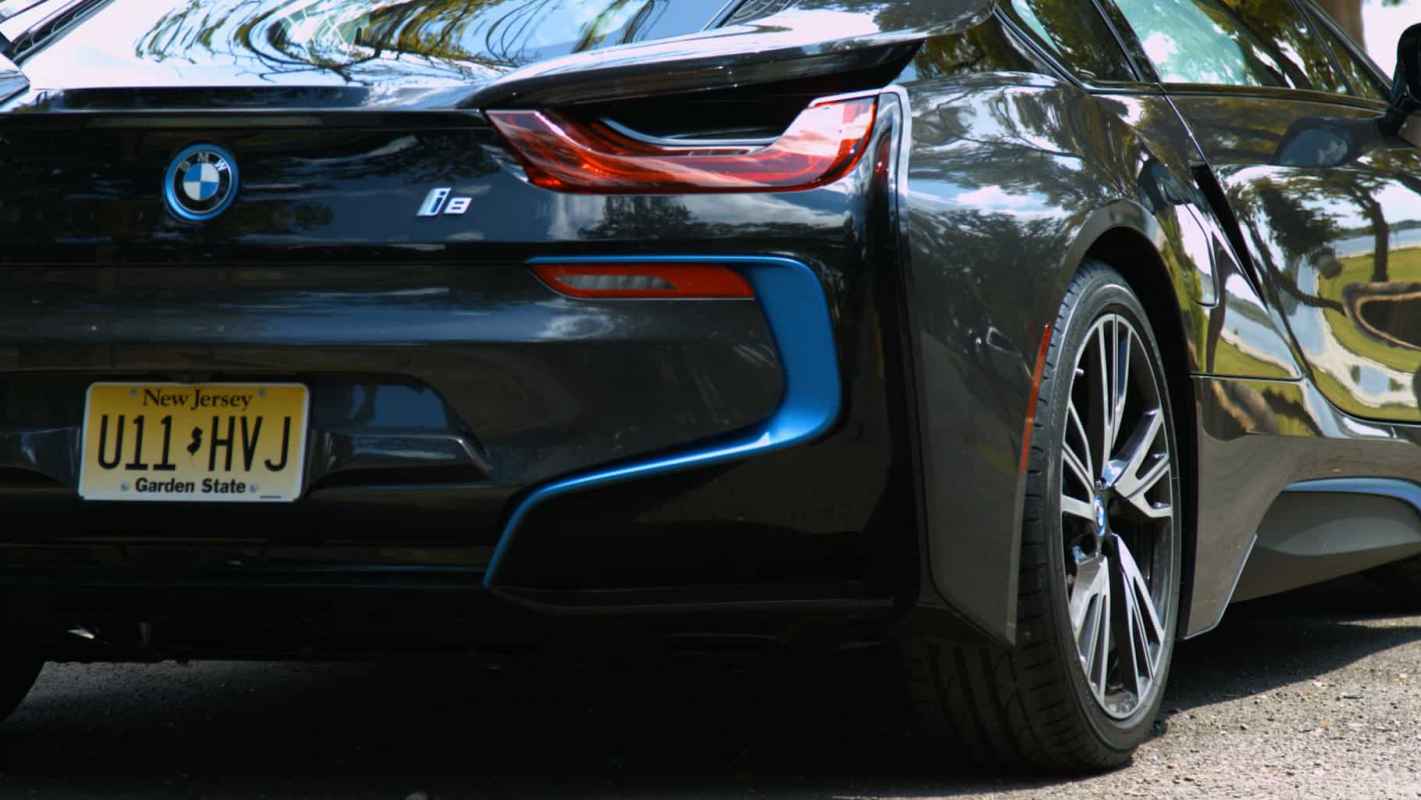 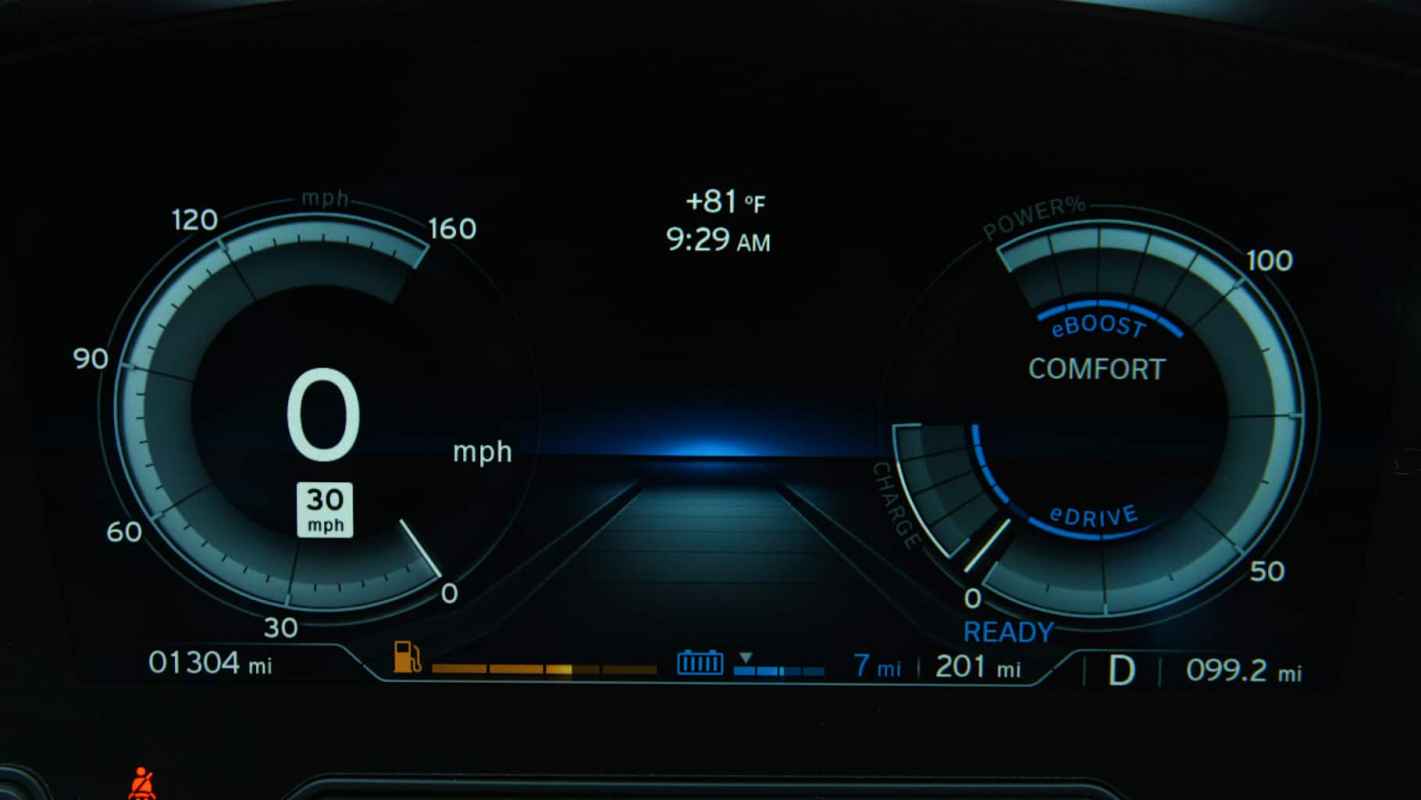 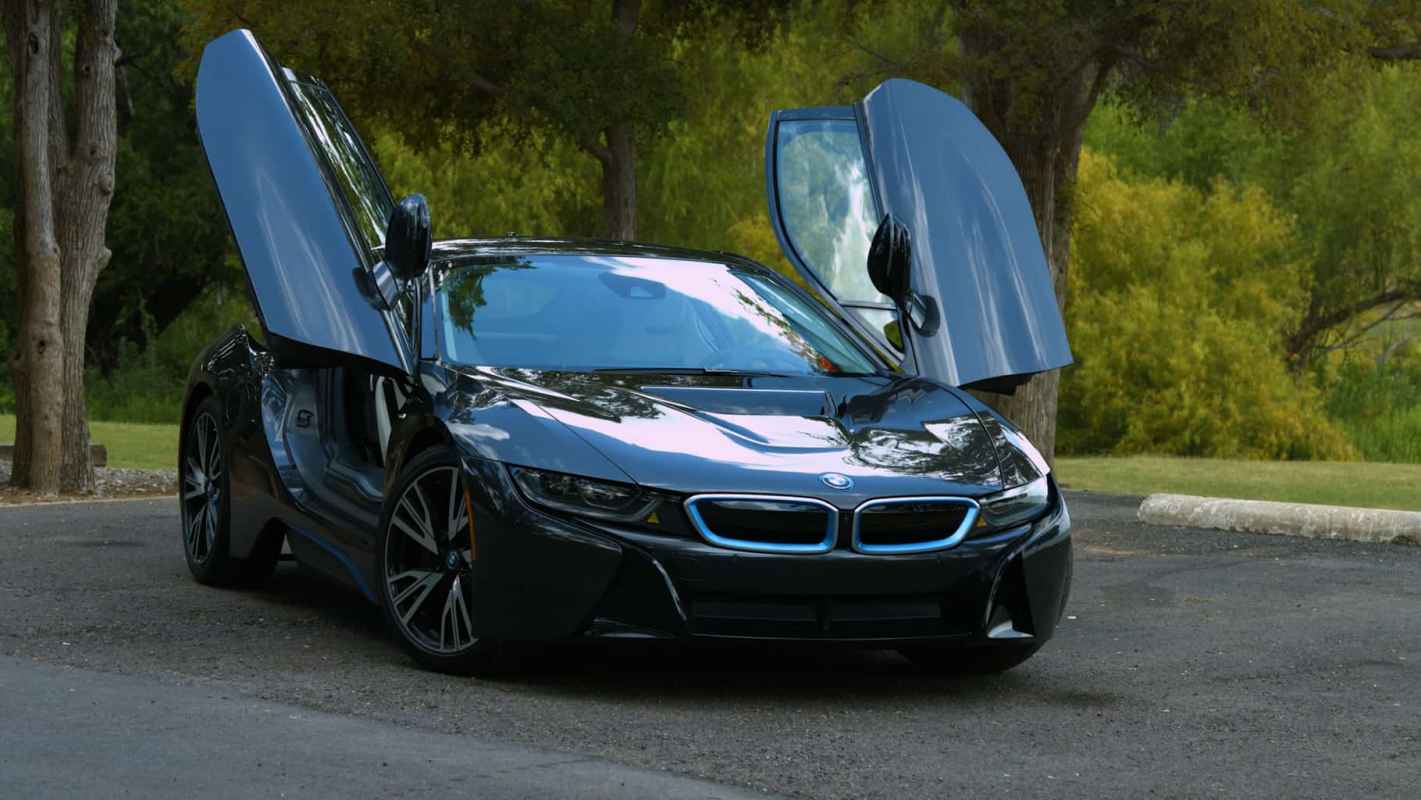