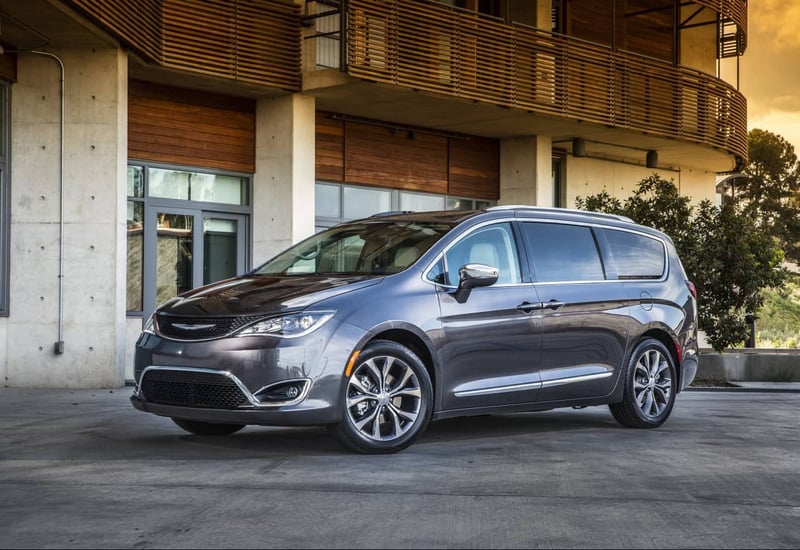 This week we take a look at the newest minivan on the market, the 2017 Chrysler Pacifica.

If that name sounds familiar, Chrysler used it from 2004-2008 for one of its crossovers.

You may recall, it was Chrysler that started the minivan back in 1983 when Lee Iacocca showed us the Chrysler Town & Country, and the Plymouth Voyager.

After a peak in 1990, minivan sales have waned to fewer than a half million in 2015, out of 17 and a half million vehicles sold in the United States.  Fiat Chrysler hopes to reverse that trend with the all-new from the ground up Pacifica.

It would appear one goal of the Pacifica is to look less like a minivan.  From the smaller front grill to the swooping roofline at the rear, and available 20” wheels, without the sliding doors it does look more like an SUV.

Let’s talk about the all-aluminum sliding doors for a moment since this is a big issue for minivan owners.  The benefit is being able to get people in and out easier when parked.  The Pacifica's standard two power sliding doors can be opened from the keyless remote or just the touch of a button on the door handle. This is a nice feature if you have something in your hands, like a kid or groceries.

My review van is the Touring package, which is next to the bottom of the line of the five models.  The lowest priced model is the LX, which starts at under $30,000 and goes up four more trim levels to the Limited, which starts at $42,500.

All Pacificas have the same powertrain, a 3.6-liter V6 Pentastar engine, mated to a 9-speed automatic transmission that shifts from a round dial on the dash.  This frees up a lot of storage area and the Pacifica has cubbyholes, drink holders, and storage areas galore.  Although this is the only available engine and transmission available now, which puts out 287-horses by the way, a hybrid version will be available later in 2016.

Options-wise this minivan has the Safety/Tec package for $995 which gives you blind-spot monitoring and rear park assist with automatic stopping.  It also has the $495 8-passenger seating, and also for $495 you get the power liftgate.

Where Fiat Chrysler really excels in the minivan wars are its Stow-N-Go seating.  All the Pacifica seats behind the front two fold flat into the floor for cargo area all the way to the rear tailgate.  You can pick and choose which seats you want to lower, and it is easy to do for anyone.  In fact, you can put all the seats into the floor in just over one minute.

Other attributes the Pacifica has that appeal to minivan owners is that it rides and drives great, it handles like a car, and it is unbelievably quiet inside.  Acceleration is strong, and the 9-speed tranny in the Pacifica shifts smoother than I remember in other Chrysler vehicles.

Fuel economy is good in this 4300-pound people mover.  It is rated at 18 city and a terrific 28 on the highway, which matches the Honda Odyssey.

Total sticker price as equipped is $33,475 and that makes this Pacifica an exceptional value as compared to other vans out there, none of which offer the Stow-N-Go type seating.

I’m not a minivan fan personally, but if I were, this new sixth-generation Chrysler Pacifica would be very high on my consideration list.