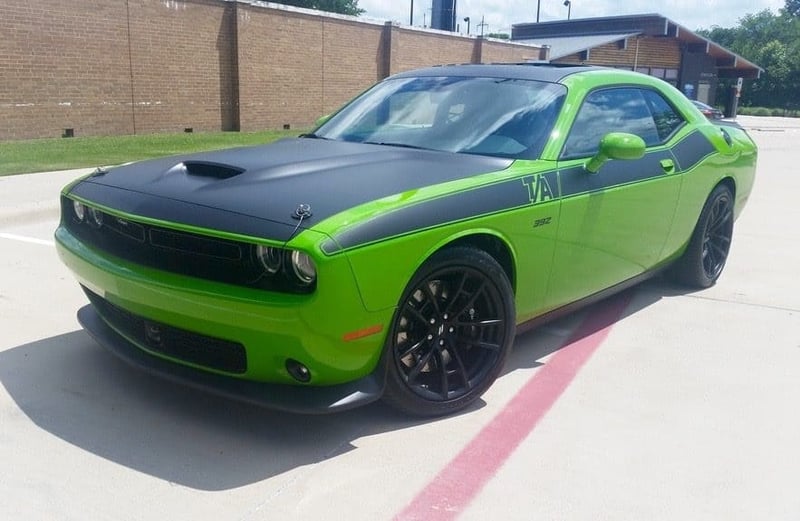 Forget the future with its hazy promises of silent, soulless, self-driving cars.

You can keep your virtual reality, digital sunsets and so-called social media as well.

Just point me toward an empty two-lane blacktop on the edge of town and I’ll try to keep my frayed bellbottoms from getting too tangled up in the pedals.

And turn up the Savoy Brown, please.

Uh, pardon my outburst, but the new Challenger T/A promises to be a wonderfully antisocial antidote to whatever ails you about the tiresome 21st century -- which is considerable in my case.

I think I need another dose, doc.

As you may recall if you still wear tie-dyed T-shirts, Dodge conceived the Challenger T/A in 1970 so it could compete in SCCA races with modified versions of the car.

When adventurous Dodge – home of the beastly Hellcat -- decided to again offer a true T/A package on its new old-school Challenger, it created a compound-retro bruiser guaranteed to terrify hybrids.

Not only did my T/A flash a shade of green seemingly lifted from a Jimi Hendrix album cover, it wore a mean flat-black hood and six-inch black stripes on its fenders and doors, just like the original car.

Moreover, Dodge wrapped the T/A’s roof-top and trunk in flat-black, too.

Like the original Challenger, the T/A glared at the world through round headlamps surrounded by a blacked-out grille.

In another nifty nod to muscle-cars from the ‘60s and ‘70s, Dodge removed the inboard headlamps to provide more cooling to the engine and molded a graceful “Air Grabber” scoop onto the car’s flat-black hood.

Big and blunt, the T/A sported classic muscle-car proportions with a long hood and short trunk, and weighed even more than the original car at about 4,200 pounds.

But the slick black stripes and a prominent character line gave the new Challenger’s thick sides some taut definition.

The big coupe also benefited from being 0.5 of an inch lower than regular Challengers, rolling on massive 275/40 tires wrapped around black 20-inch wheels.

Despite the T/A’s ties to the ‘70s, it is not some rejuvenated relic steeped in the past.

Think of it as a much faster, better handling, more solid descendant of the original car -- a modern muscle car in old clothes that can squeeze off a 0-60 run in a blazing 4.2 seconds, according to Car and Driver.

A snorting 6.4-liter Hemi V-8 with 485 horsepower resides beneath the Challenger’s wide hood, putting all that power to the pavement with a quick-shifting eight-speed automatic. (A six-speed manual also is available.)

Bilstein shock absorbers, a sport suspension and Brembo brakes help keep the car stuck to solid ground, while a popping, thunderous exhaust reminds you of the engine’s dark intentions.

Even light swipes of the throttle were met with a shove to the shoulders and chest, not to mention a little chirp from the rear tires.

Stand on it hard and you can plan on getting pinned deeply to your seat by a hoarse, bellowing Hemi that pulls hard all the way to 6,000 rpm. (You can also count on 15 miles per gallon – maybe.)

Unlike Challengers from 47 years ago, though, this one turns hard into corners with little – if any – body lean. It’s too heavy to be crisp, but is still plenty competent.

The steering, meanwhile, was a bit too modern for my taste – thick, somewhat heavy and kind of numb. However, it was fairly quick and seemed to fit the T/A’s street-fighter personality.

As you might expect in a high-performance muscle car, the ride felt firm and slightly fidgety, but never really lapsed into harshness.

All of that goodness ends, though, when you open the door.

The black, plastic-heavy interior in my T/A was easily its weakest feature and a real ding in its $55,000 window-sticker.

As in all Challengers and Chargers, grainy black plastic covered the flat dashboard, which wrapped around a protruding 8.4-inch display screen.

Though the big screen offered multiple functions – such as a rear back-up camera and various safety nannies – the stereo and climate control could be controlled with basic buttons and knobs. (Points for that, I say.)

Likewise, the door panels looked like sculpted black-plastic sheets, while leg- and head-room in back were pretty limited – maybe me and one hyper border collie.

Fortunately, the T/A featured fine form-fitting black-leather seats with grippy suede centers and that’s all that really mattered to me.

In fact, I’ll take two while I can still buy impractical, improper, high-personality cars with the power of four Priuses.

Oh, and in keeping with the mooch ‘70s, send the bill to my successful brother. 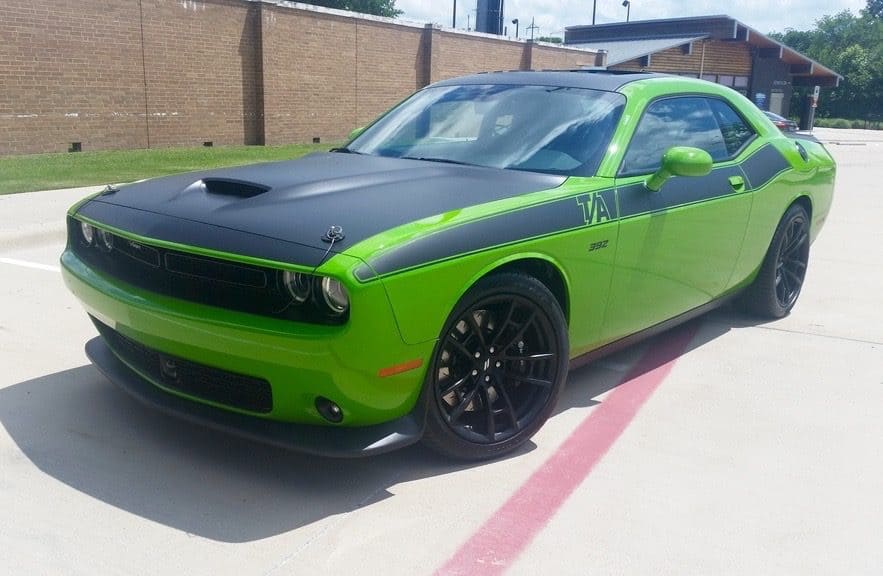 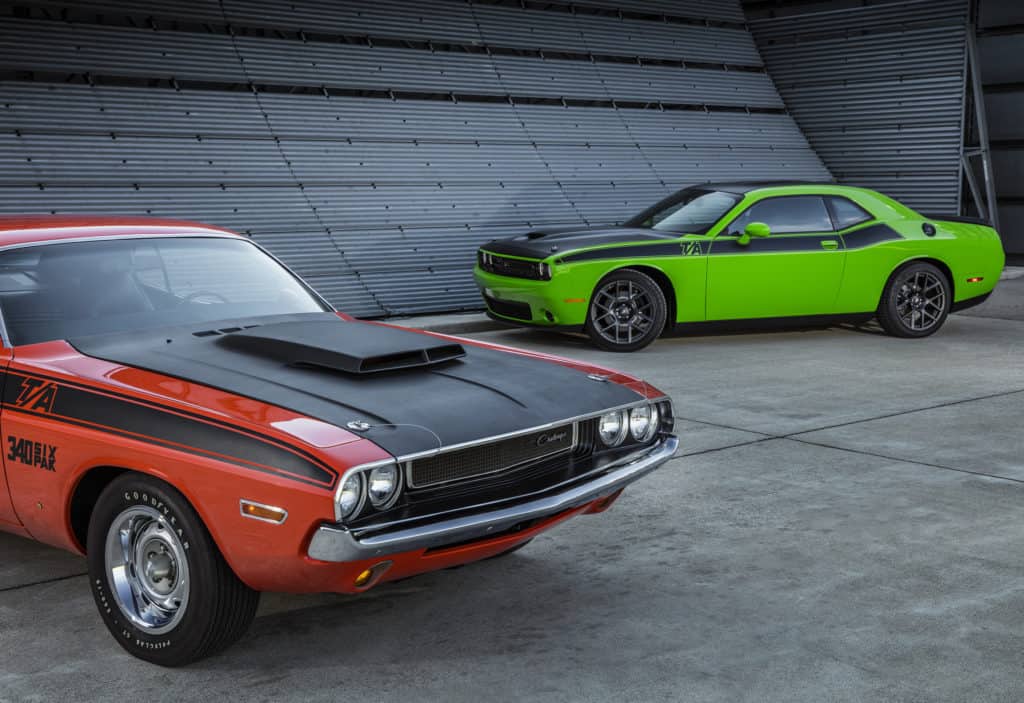 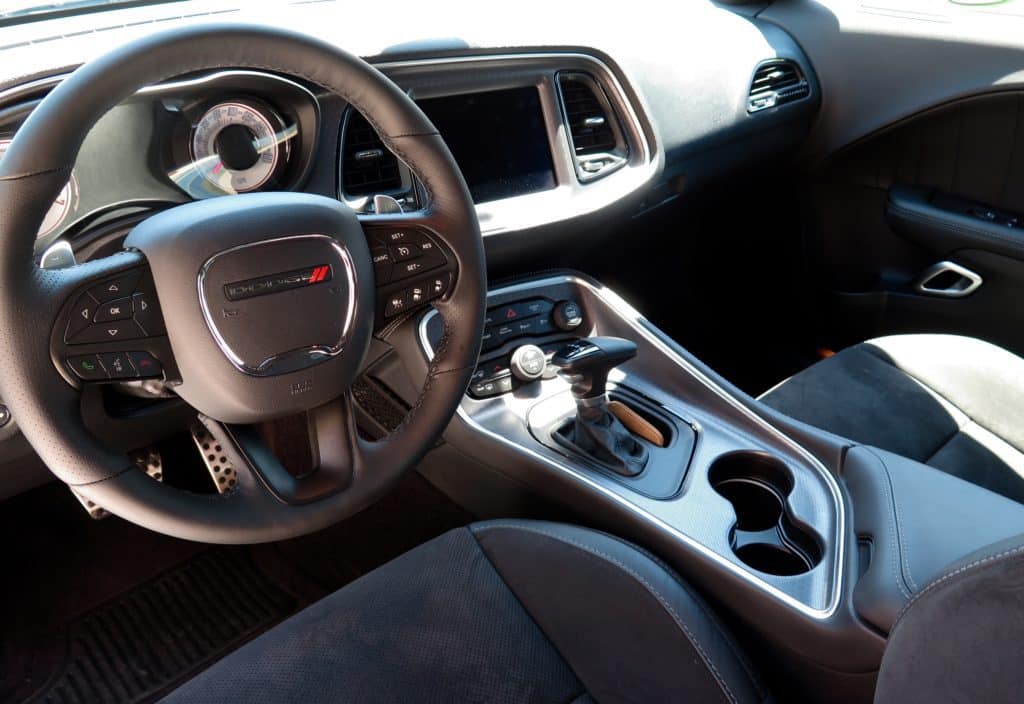 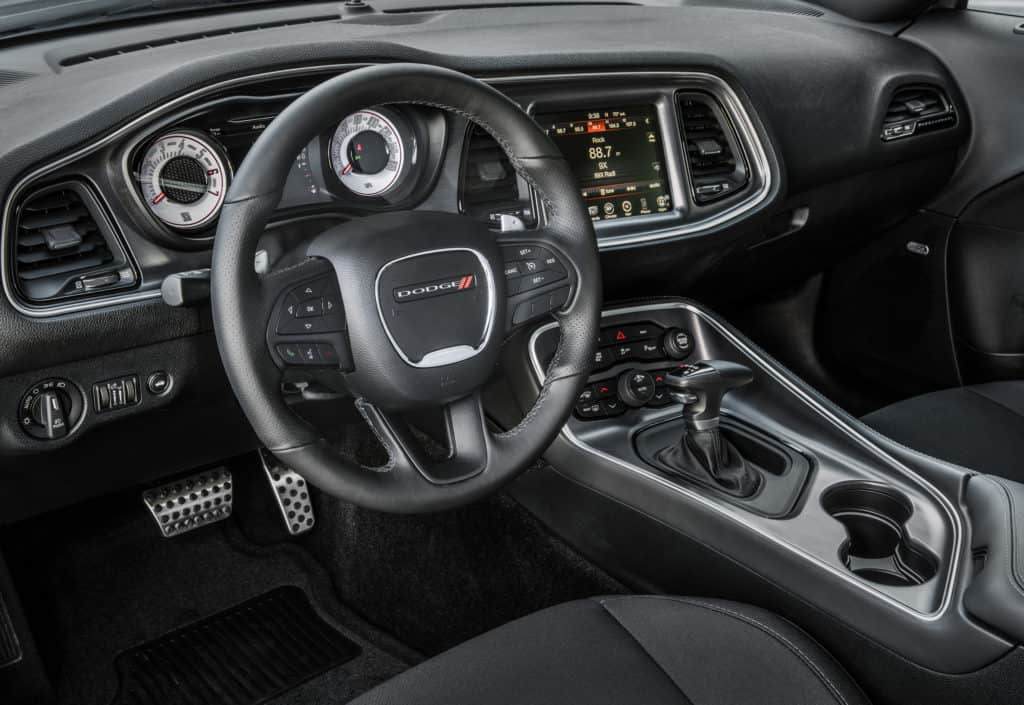 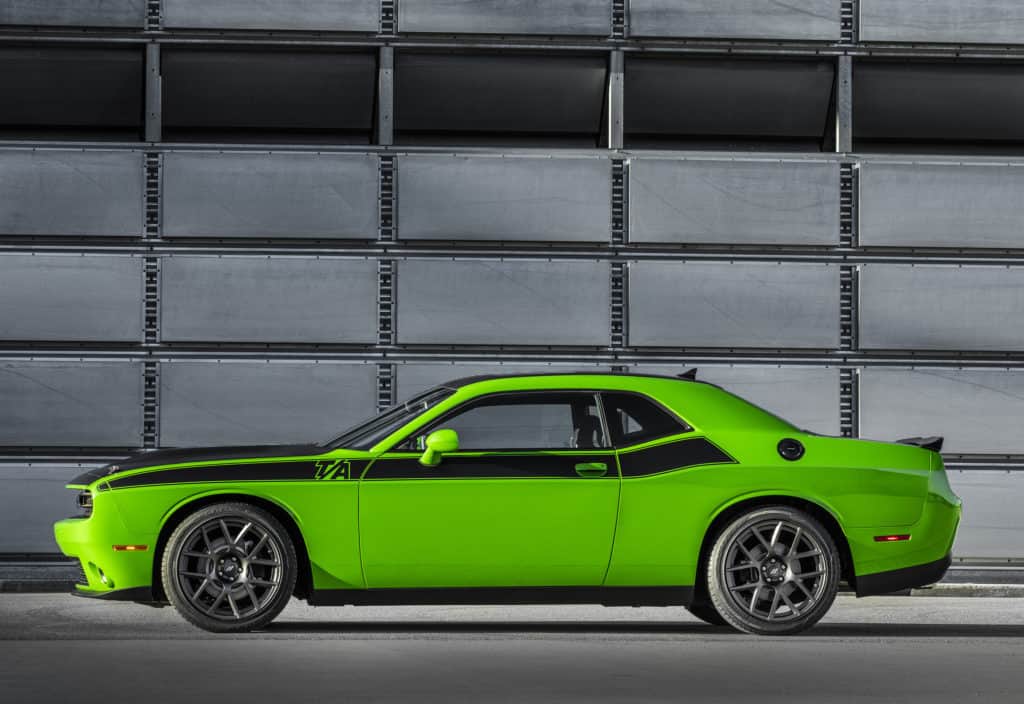 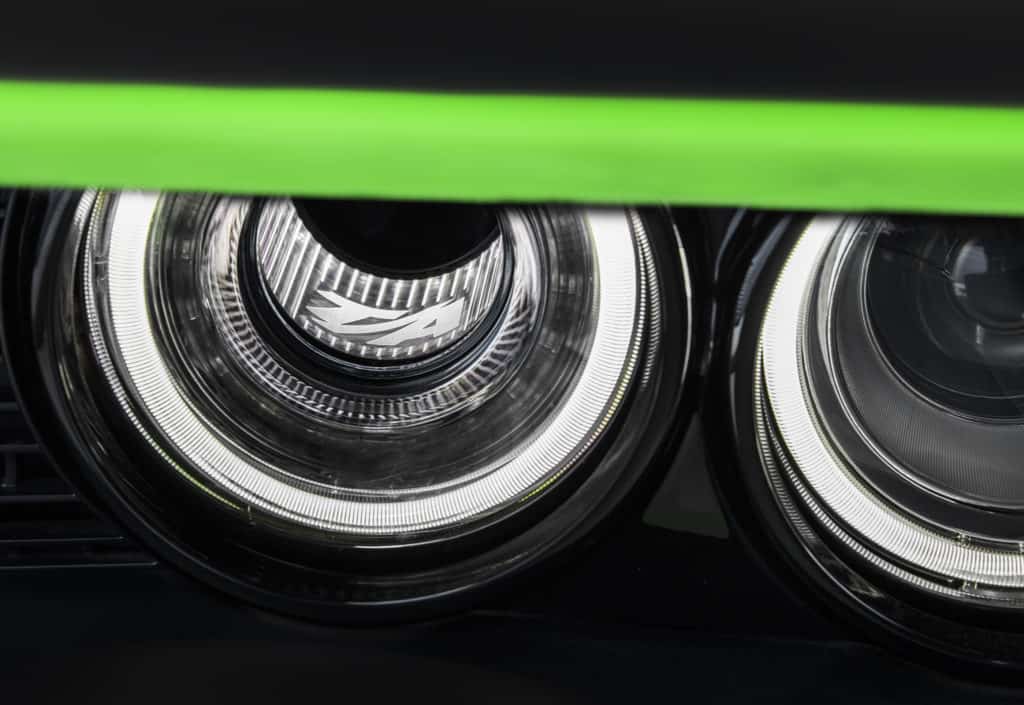 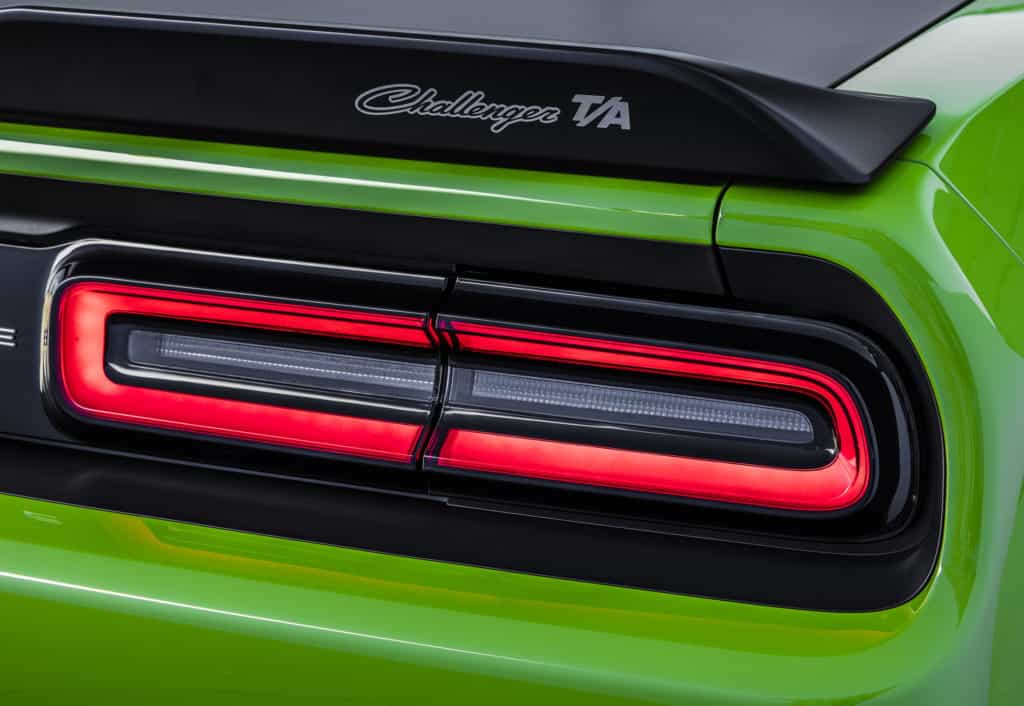