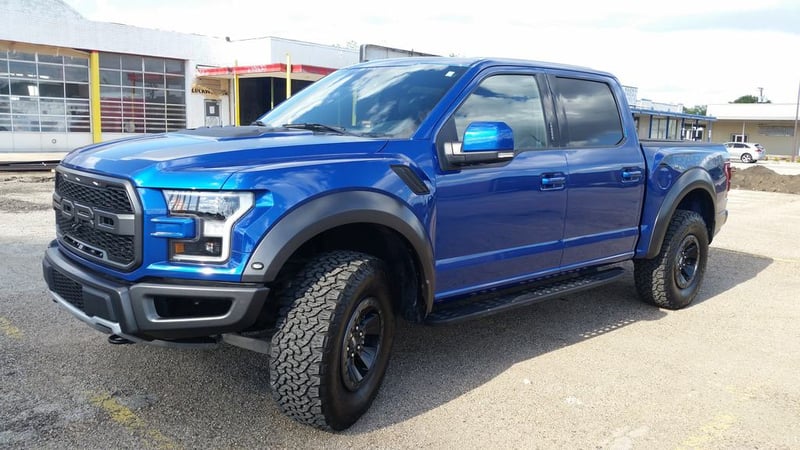 Maybe the neighbors won’t mind too much if I bury my backyard in sand and six-foot cactuses.

I might also throw in the ravaged hulk of an old Studebaker and a fine assortment of reptiles -- the perfect desert setting for my 2017 Ford F-150 Raptor.

Sure, dune-jumping may prove to be a challenge, not to mention a serious non-conforming use, but this glowering, hard-edged truck – a Monster of the Mojave -- just doesn’t belong on firm city ground.

As you may recall, Ford unleashed the first brutish, off-road Raptor in late 2009, a malevolent beast with graphics of gray mud-splashes on its sides.

I expected it to ride like an old Concord Stagecoach being chased down a rocky creek-bed by outlaws, but as I discovered, Ford somehow found the suspension and chassis magic to squeeze Big Rowdy into a three-piece suit.

The all-aluminum 2017 model, with its sledgehammer of a turbocharged V-6 and sophisticated Fox shocks, may be the best Raptor ever – though I say that advisedly.

I couldn’t con Jerry Reynolds or Ford into letting me take the press-fleet Raptor on an extended high-speed dust-raiser through Big Bend’s craggy mountains and unforgiving deserts.

“Boss, I’ll be back before winter.”

Yeah, right. So I’ll focus instead on the new Raptor’s street manners, figuring that’s where most of the well-sorted trucks will likely spend a majority of their time.

Still, my metallic blue Raptor SuperCrew looked like something that should be chained to the driveway at night.

An enormous black grille shouted “Ford” in three-inch tall letters, while large stacked headlamps embellished the trucks near 80-inch height. (I never actually saw the top of the Raptor’s roof, but I’m pretty sure it looked fine.)

In back, dual four-inch-diameter black exhausts bristled beneath a black bumper, looking as if they might be spewing testosterone as well as exhaust into the air. Does the EPA regulate that too?

Beats me, but you may seriously wonder about the angry-looking giant the first time you start it.

It kind of growls through pursed lips initially, its twin turbochargers absorbing much of the snarl from the potent 3.5-liter V-6.

Keep pushing and the Raptor starts to sound like a cross between a new Porsche 911 and a ’54 Chevy with a cold-water six – not great, but not bad.

The key, though, is push. Despite punching out an impressive 450-horsepower, the 3.5 feels a little lazy at neighborhood speeds – thanks mainly to its new 10-speed automatic.

If you’re just cruising, the transmission will be in 7th gear by 30 mph, letting the engine loaf along at 1,000 rpm. The wide array of gears also allows the 6,000-pound Raptor to squeeze out 15 miles per gallon in town and 18 on the highway.

Everything changes, though, the second you slam the accelerator to the floor. The Raptor’s mutter becomes a thickly mumbled howl and the big truck rises up in a fury, bolting to 60 mph in a physics-defying 5.1 seconds, according to Car and Driver.

It feels more than a little unreal.

Although the truck got a little fidgety on broken, rolling side streets, I never noticed much bounce or harshness or body squirm even then.

Likewise, the Raptor’s steering was a tad slow, but transmitted fine road feel and helped the truck seem as oddly refined as an outlaw who quotes Shakespeare.

Maybe that’s what you expect in a burly four-wheel-drive pickup costing $70,595.

A broad, flat dashboard in pliable plastic flashed subtle stitching on its edges, wrapping around an enormous center stack with a big display screen.

Similarly, the console appeared to be about two feet wide and contained a 110-volt outlet as well as nannies such as a reverse-sensing system, hill-descent control and trailer-sway control.

The leather front seats offered supportive bolsters and nicely sectioned centers, while the back seats provided limousine-like leg- and head-room, and could be folded flat if you need to transport a cannon or something.

If anyone asks how in blazes you could spend $70,000 on a pickup, just point out that it’s a cowboy Range Rover. 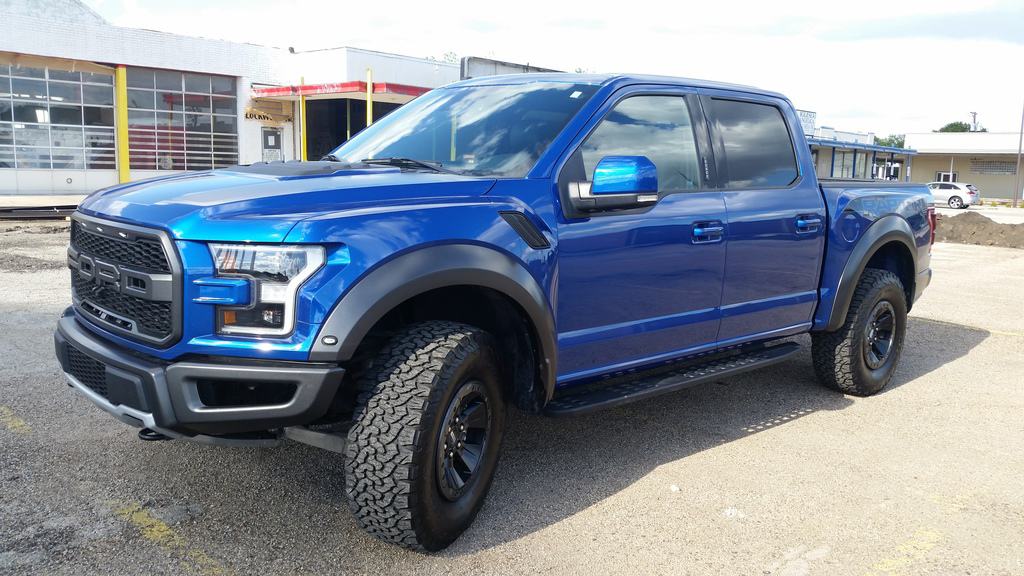 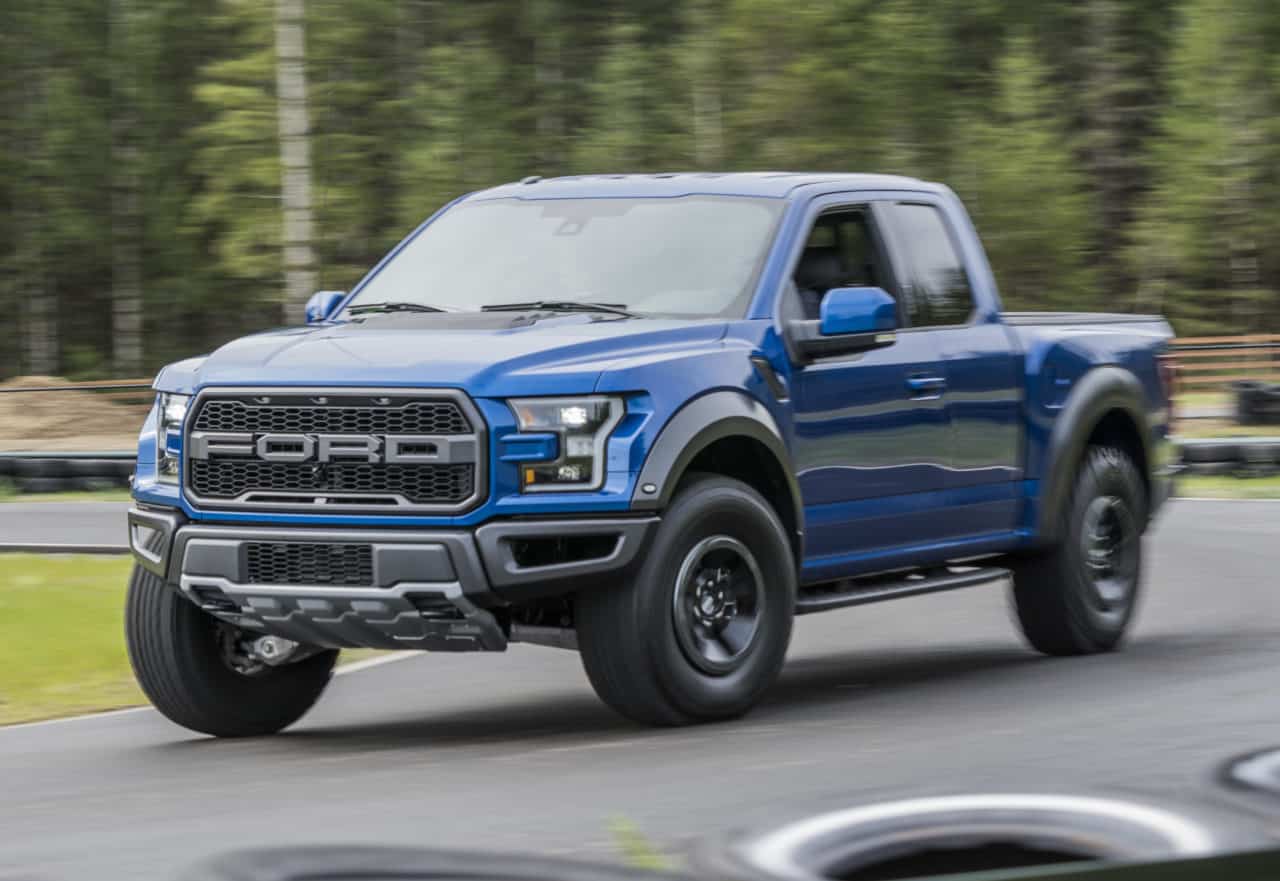 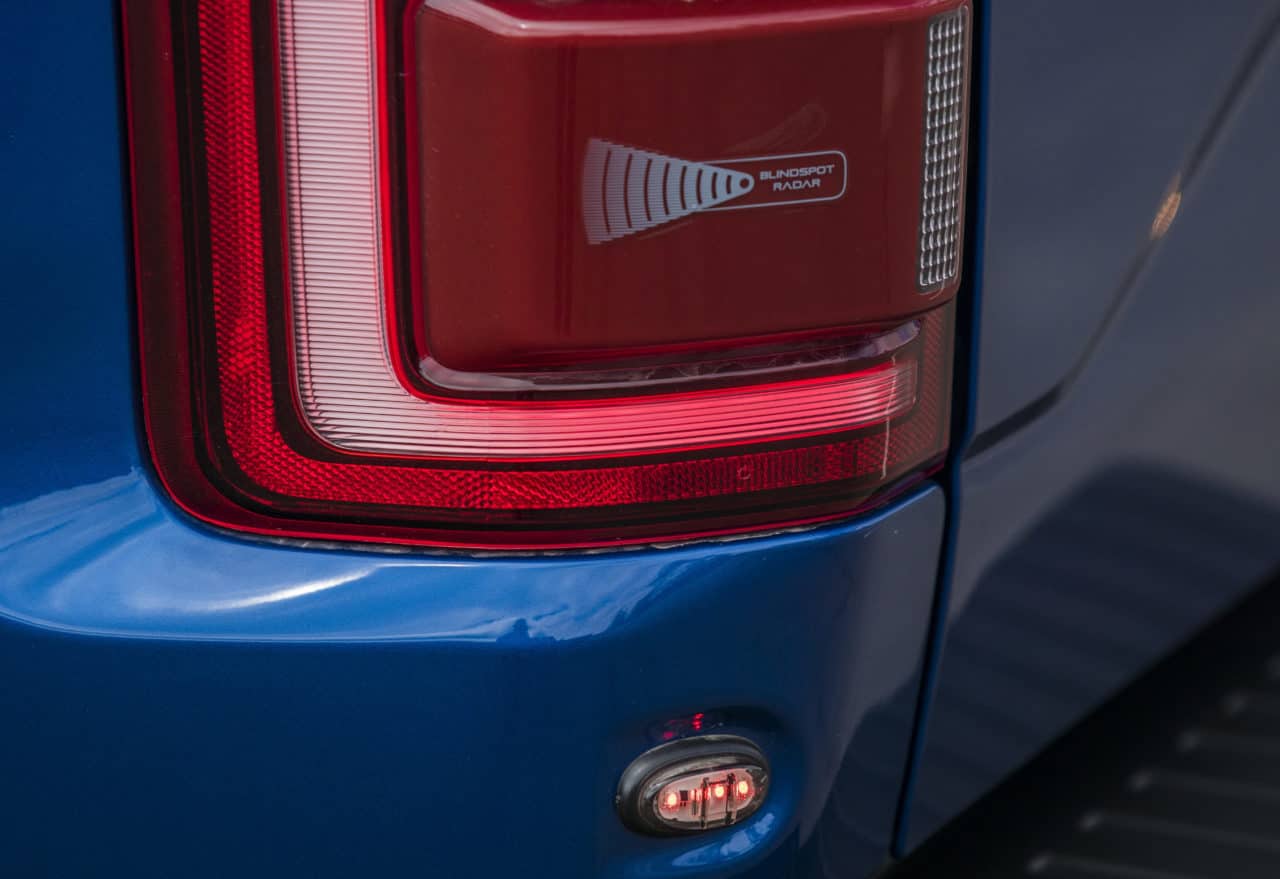 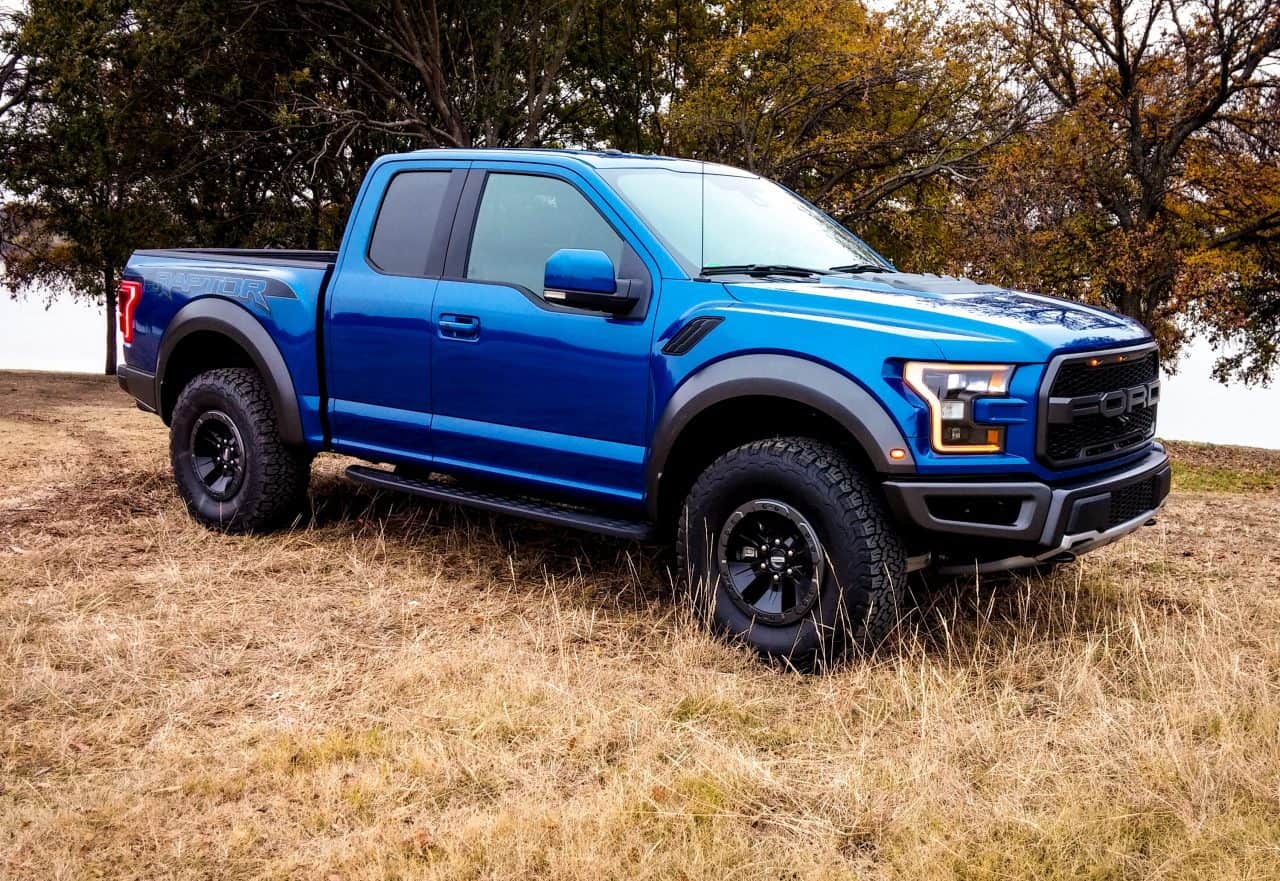 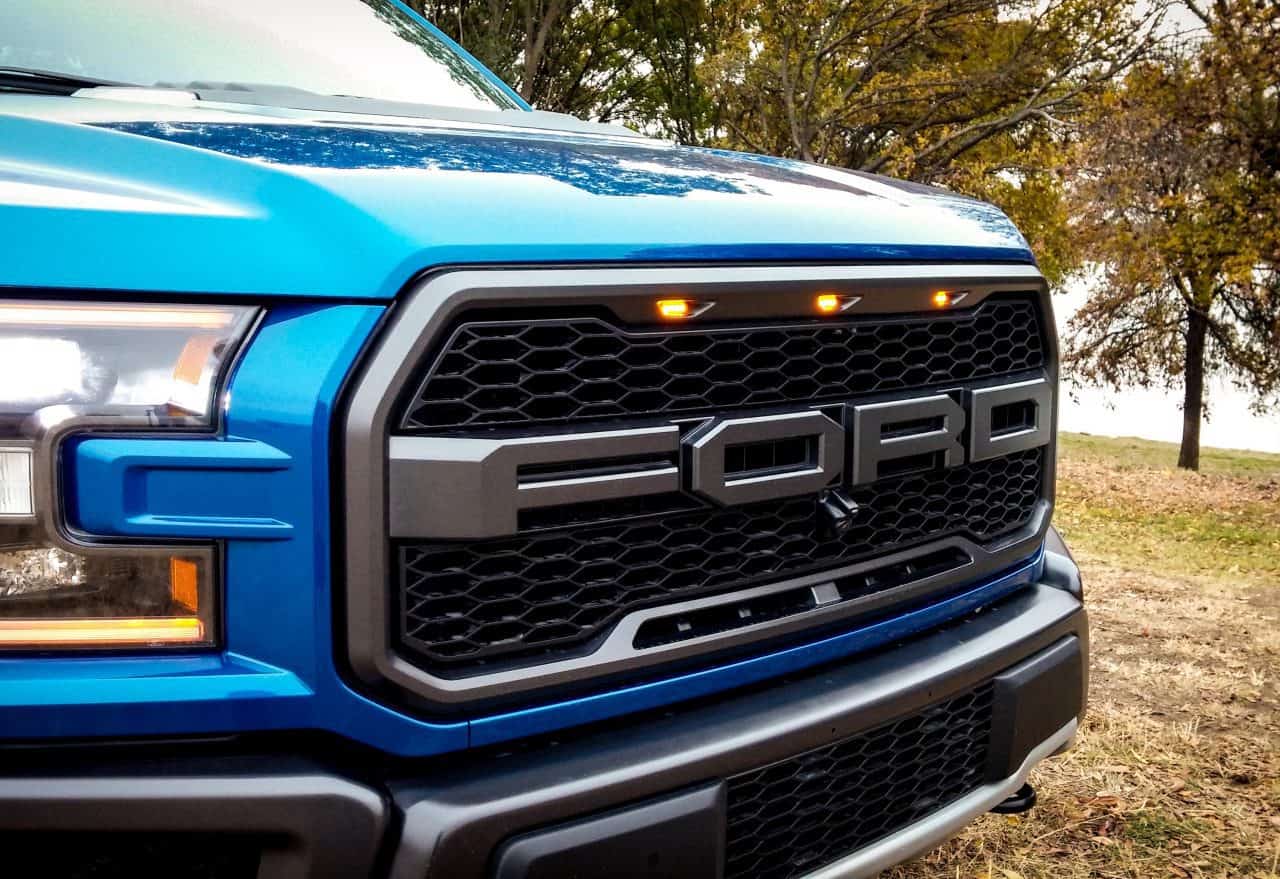 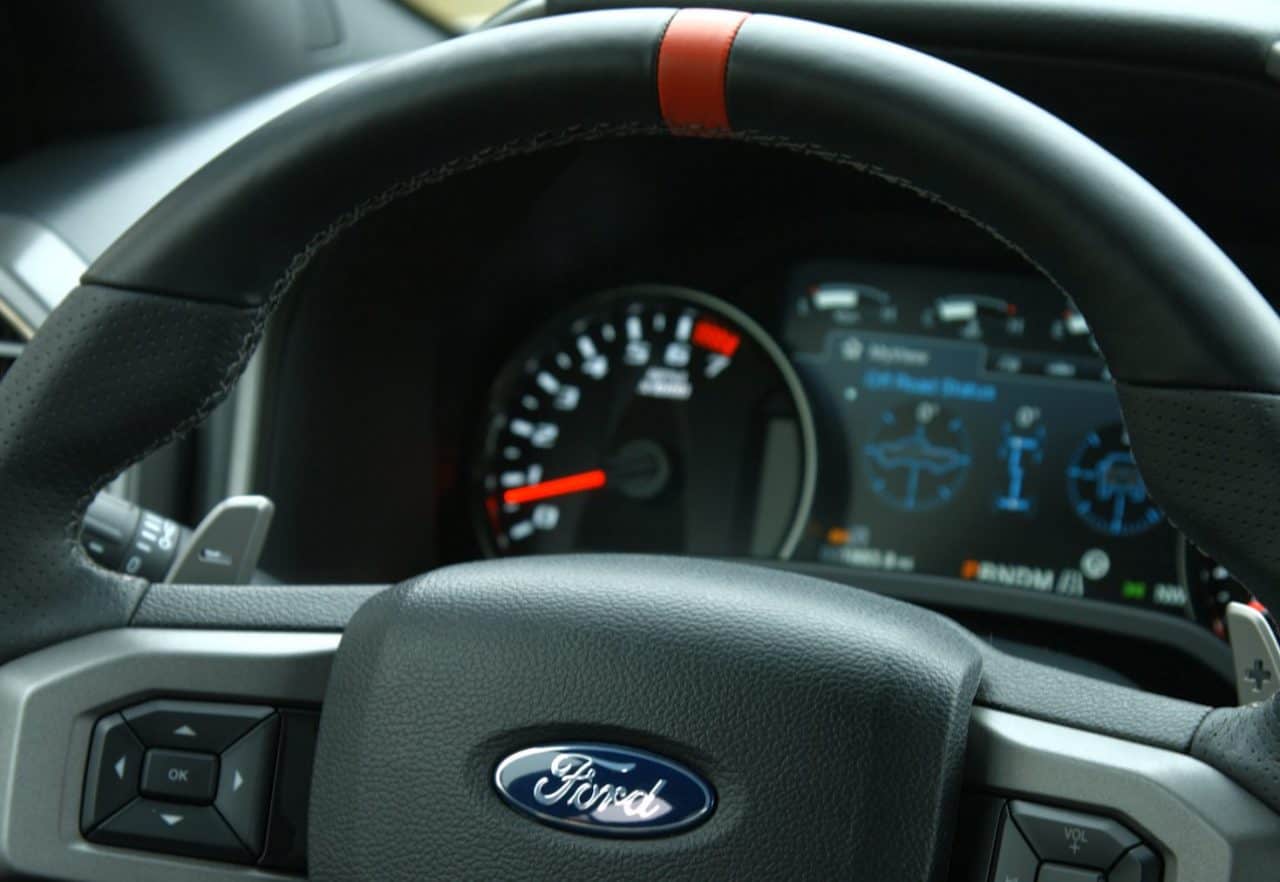 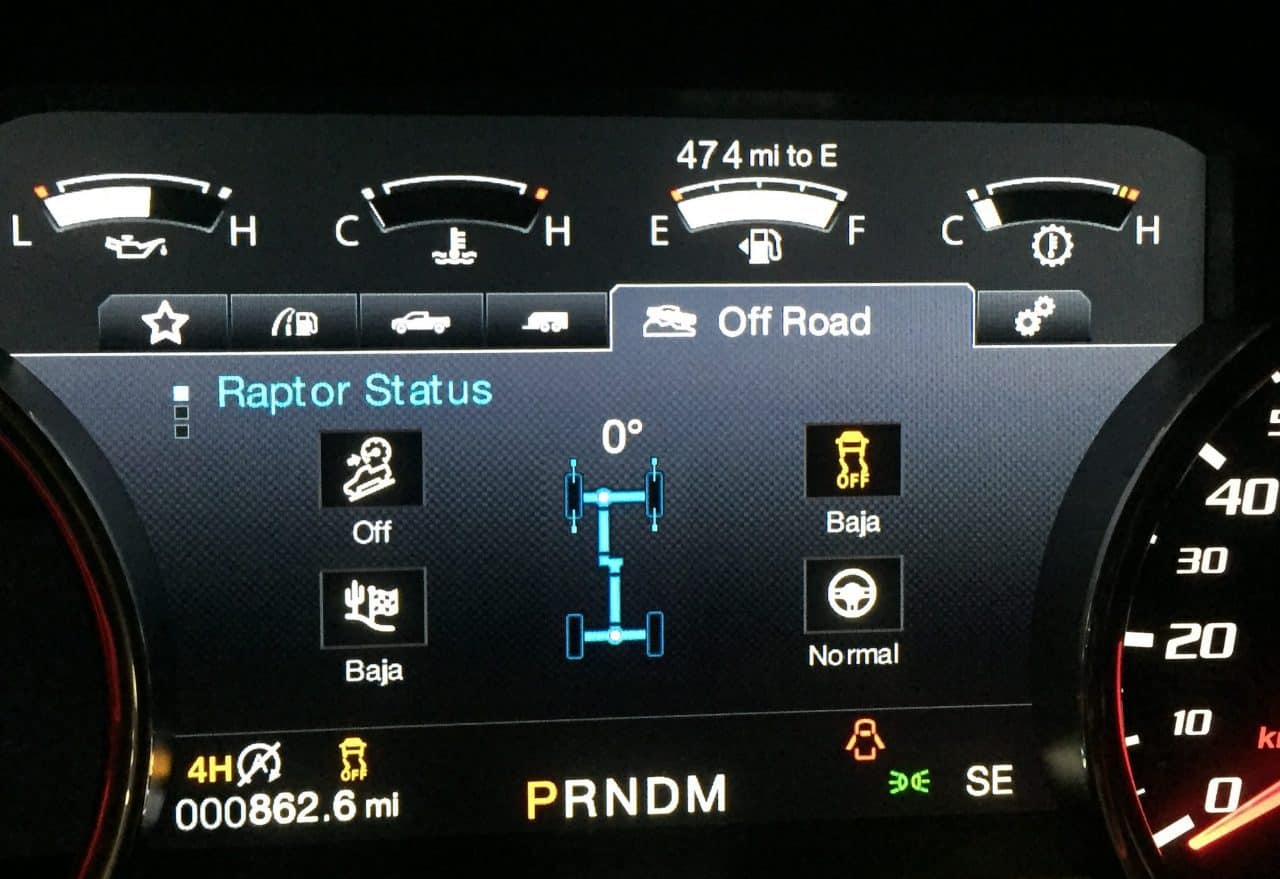 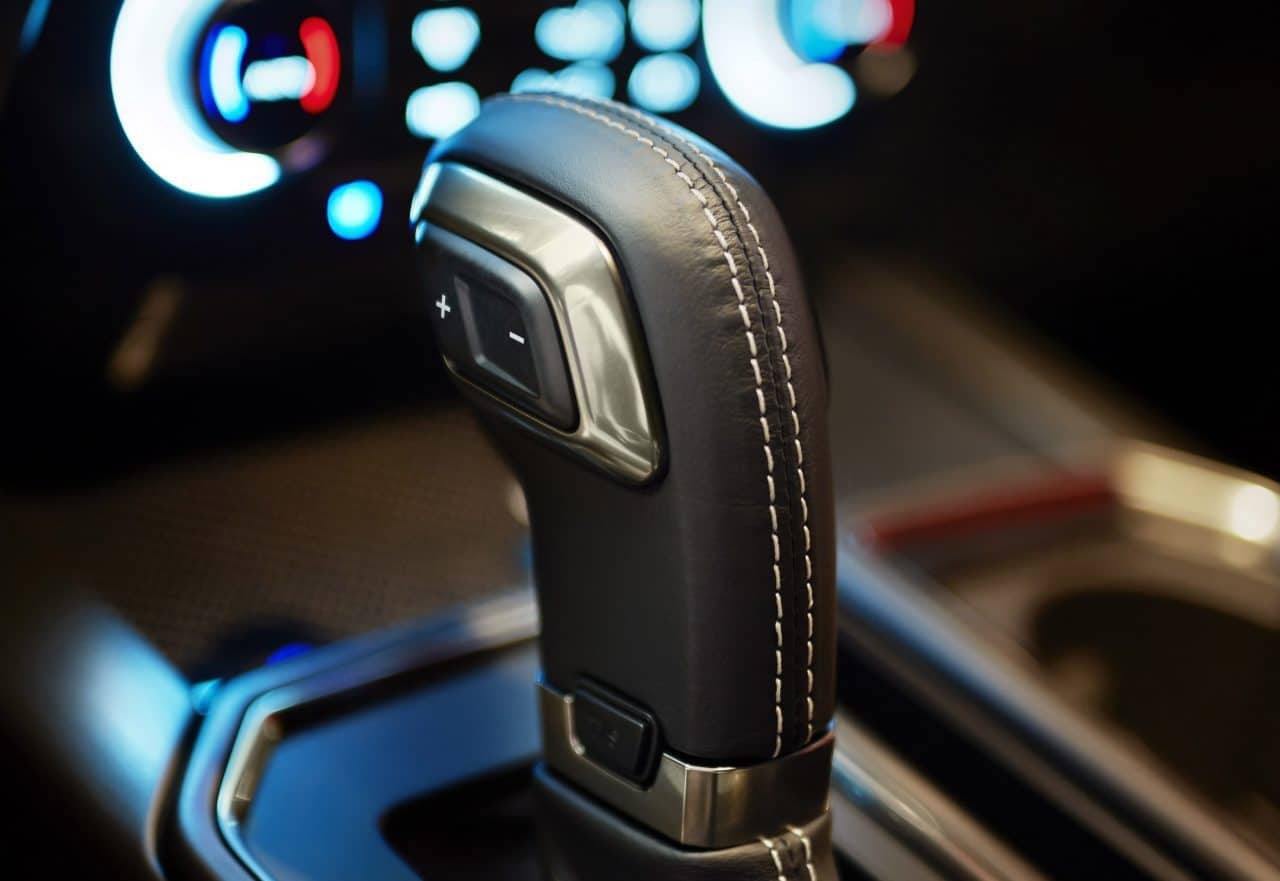 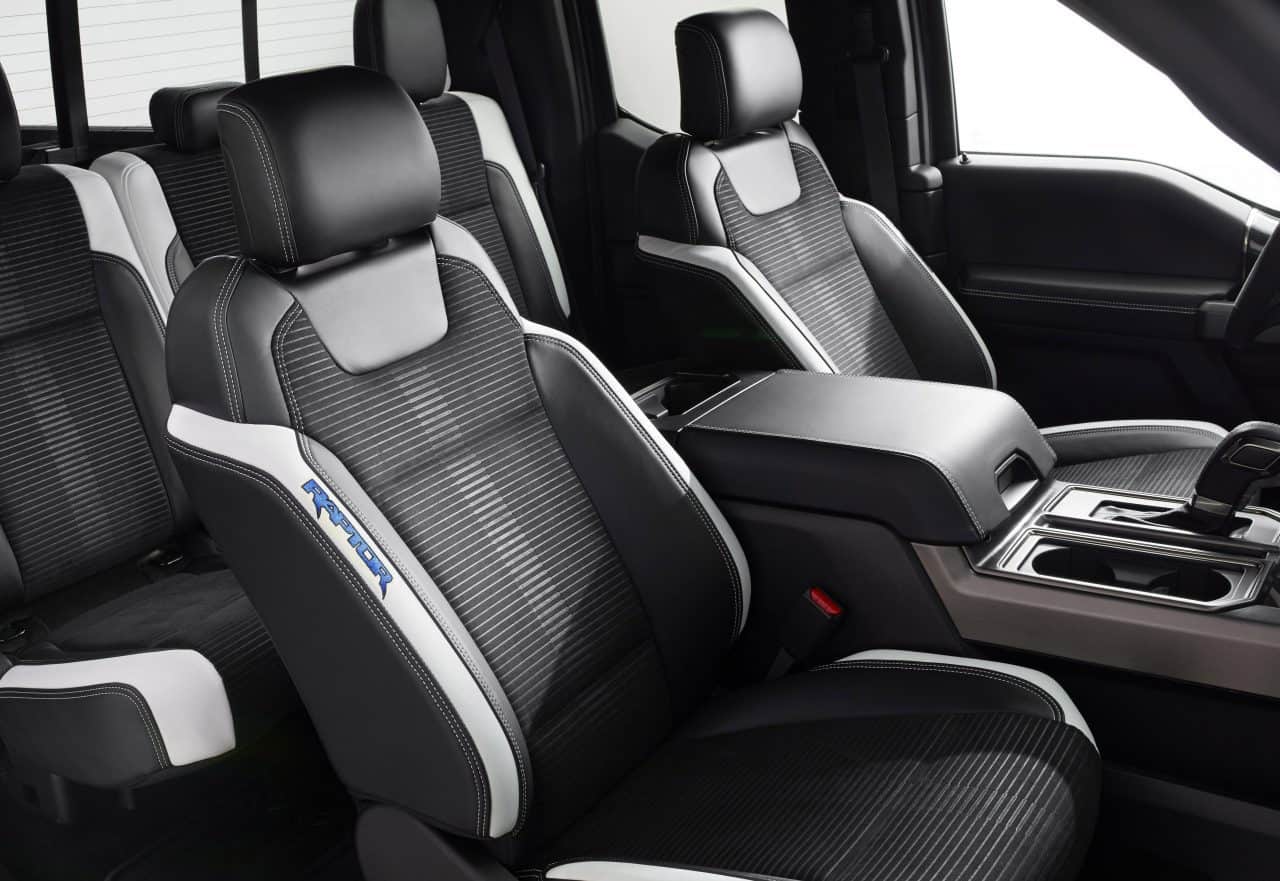 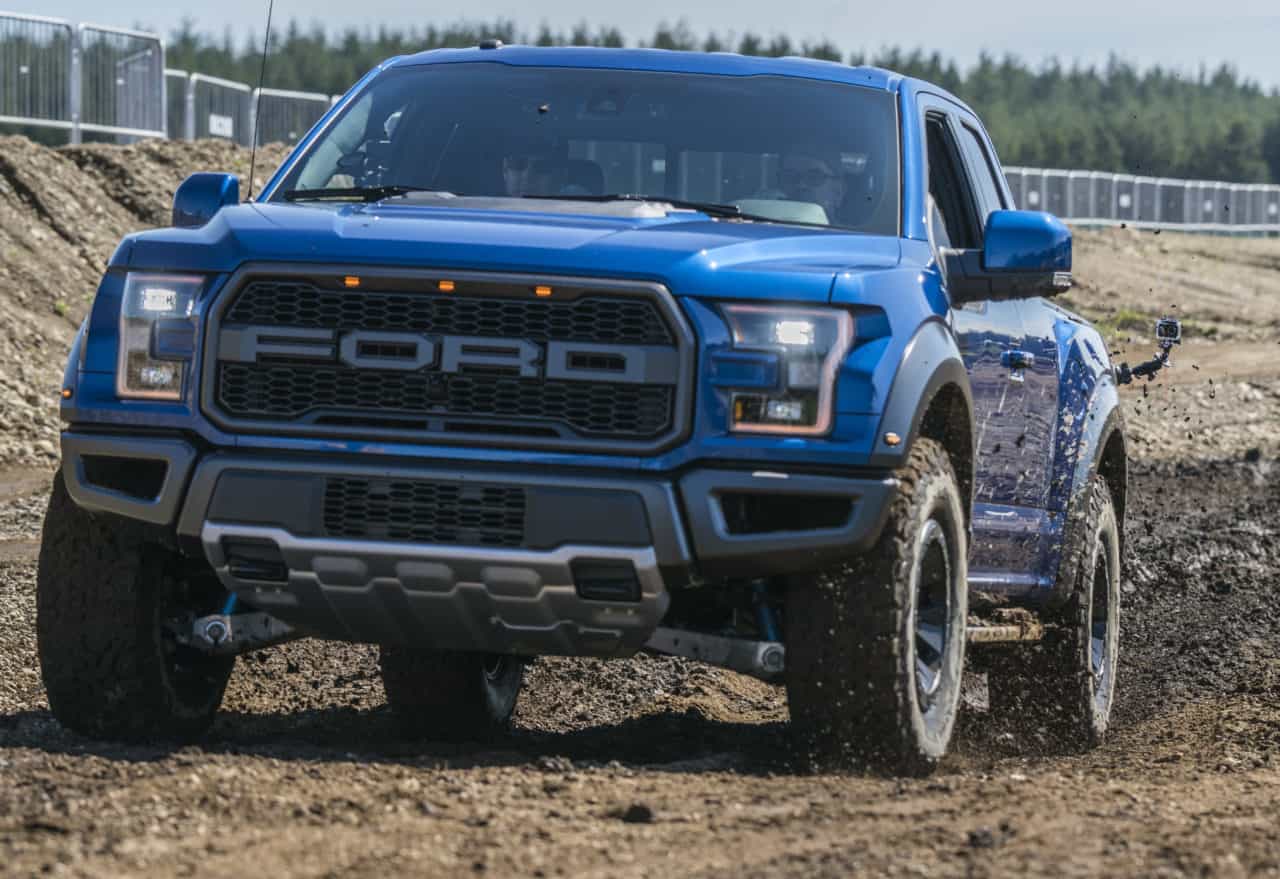 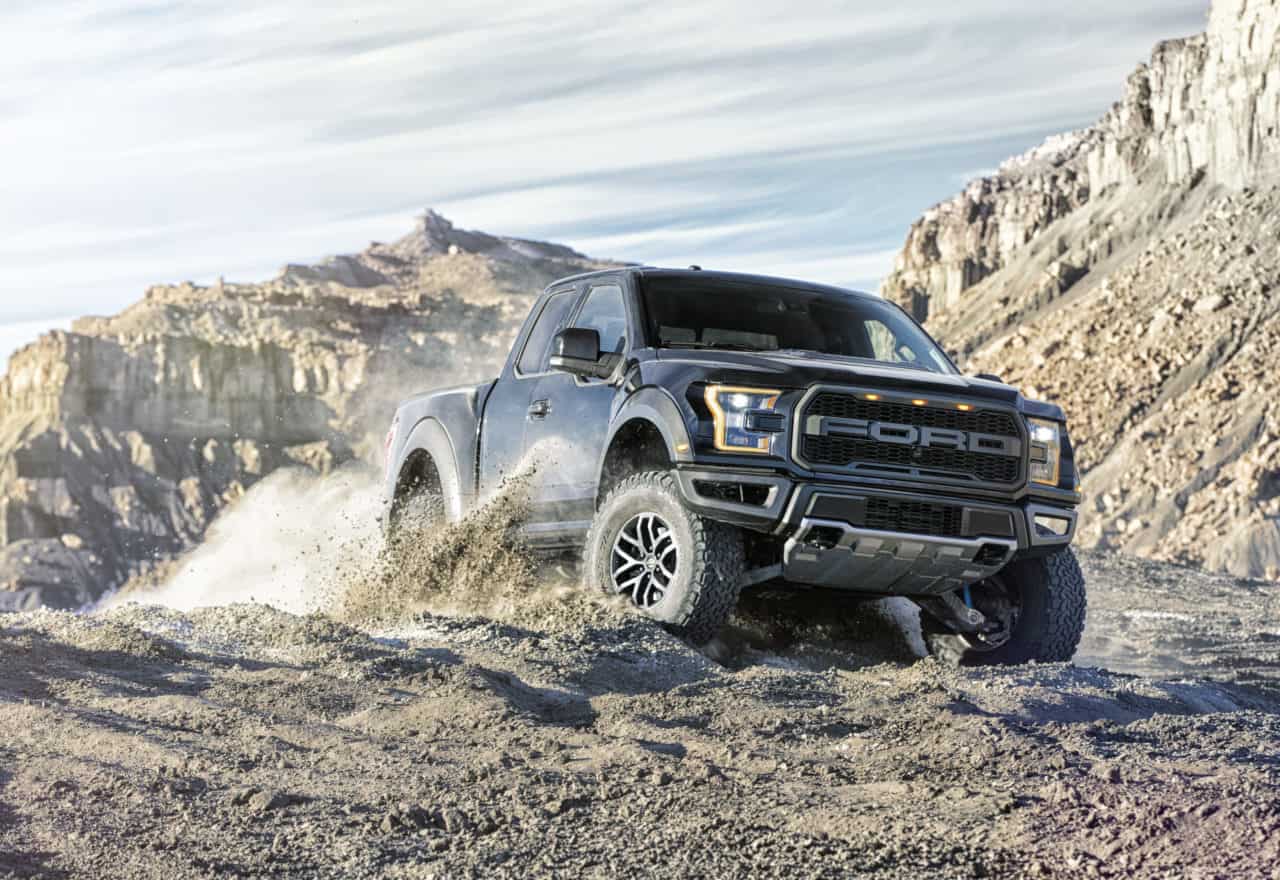 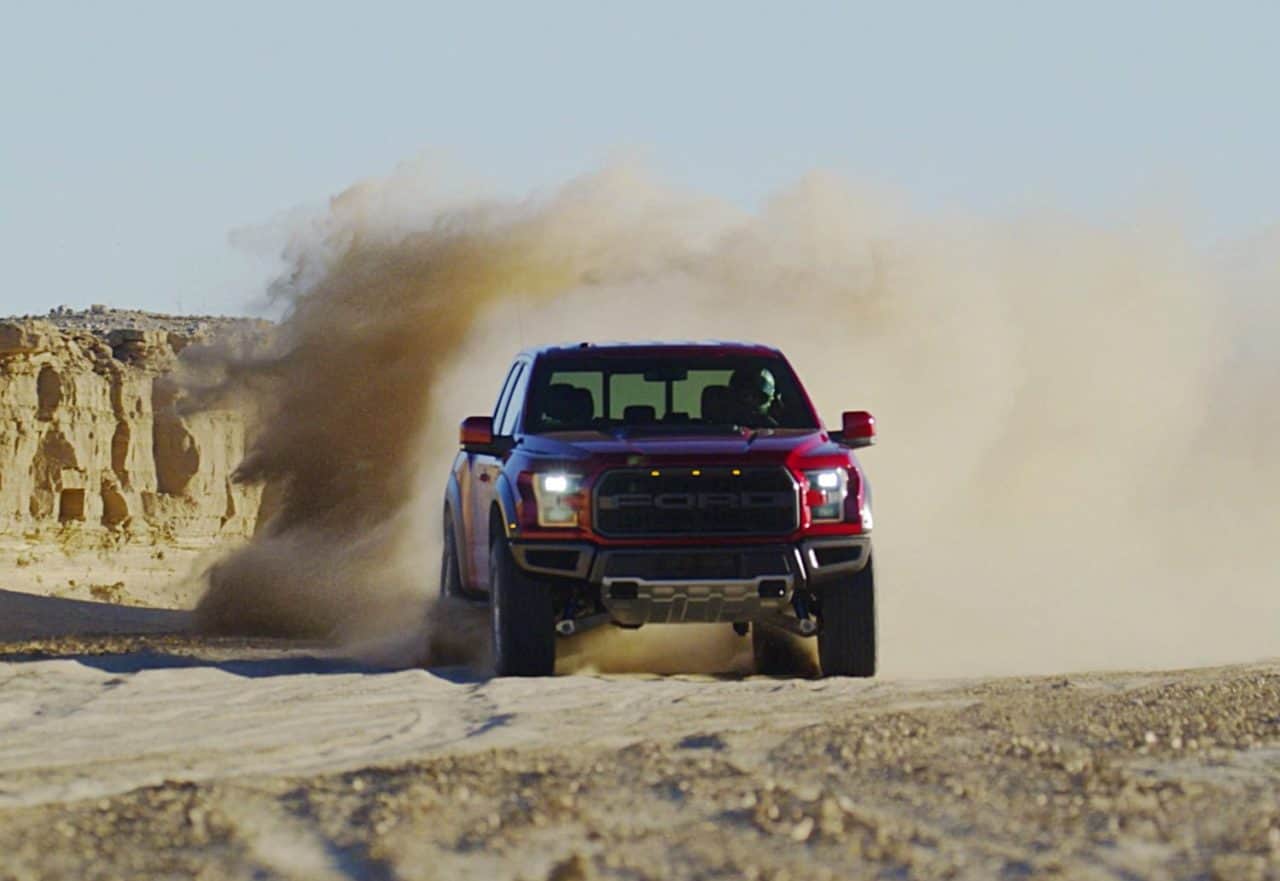 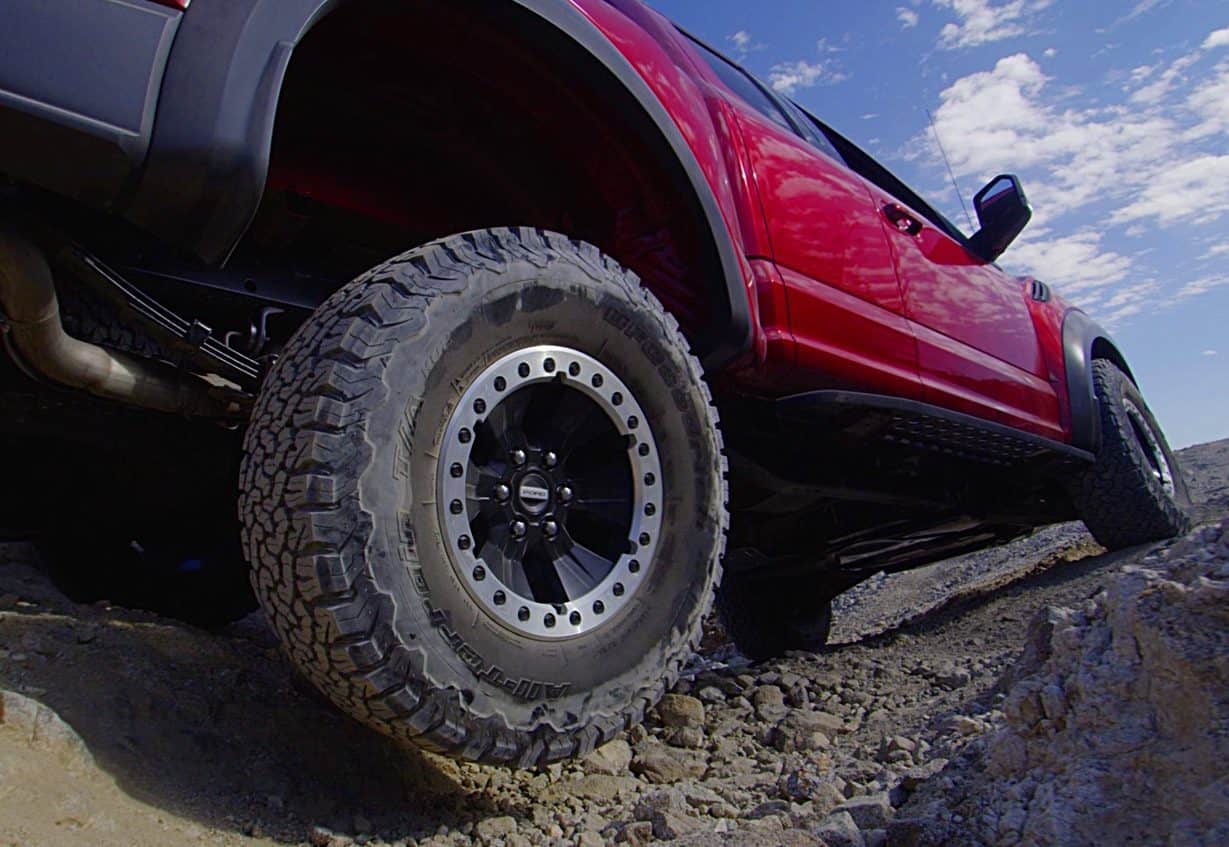