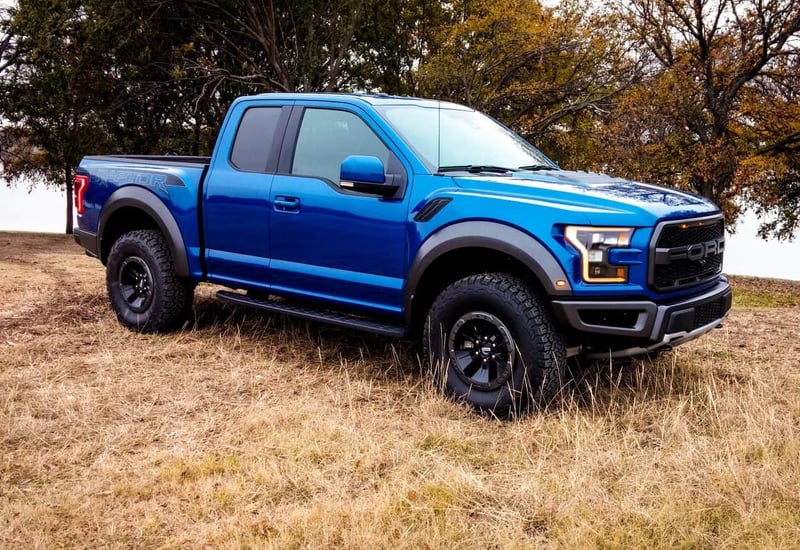 The biggest change for 2017 is Ford’s use of the all-aluminum body, which cut out 500 pounds of weight.  Also, a 3.5-liter six-cylinder high output EcoBoost twin-turbo engine replaces the old 6.2–liter V8.  This enhanced EcoBoost produces 450-horses and an amazing 510-pound-feet of torque.  Ford utilizes different technology for this EcoBoost, including the use of different turbos.

Perhaps the change which most interested me was the first mass-produced 10-speed automatic transmission ever.  The same transmission is also offered in some of the regular 2017 F-150.

As you can see from my video, Raptor is a beast of a truck.

It's built to go off-road, up mountains, and through the roughest of terrains.  The surprising thing to me was how enjoyable this 5800-pound 4x4 was out on the highway.

This is the SuperCab model, but it does come in a full four-door version.

A new bold grill with 3 yellow lights in the center lets you know you are in the way of a Raptor, odds are it is coming through. There are also single marker lights on every corner of this widebody pickup.

This Lightning Blue F-150 screams Raptor with special graphics on the side, 35” tires and 17” Beadrock wheels, and true dual exhaust coming out the back.  Because of its improved ground clearance, you get a great view of the huge Fox racing shocks.

As you step up into the Raptor, you see a clean, well laid out interior.

The cabin features great leather monogrammed captain chairs that are heated and cooled.  There is a huge driver info center in the middle of the dash that is operated from the steering wheel. Like Raptors of the past, there is a red marker at the top of the steering wheel, so when you are on rough terrain, you can tell your steering wheel is dead center.

With Raptor you get the Ford Sync 3 system that operates from a color screen in the middle of the dash.  It swipes left and right to see the different apps, like Apple Car Play and Android Auto.  When you have the navigation system up, you can pinch in or out to see the screen better.

The Sync 3 system is quicker, easier to operate, and very easy to learn.  It has an awesome 360-degree camera and you can see where you are in a 7-foot diameter from above, as well as a front view camera when you are climbing steep hills.

Also from the steering wheel, you can choose from six different Terrain settings and the truck does all the adjusting for you.  Choose from normal, sport, weather, mud & snow, Baja, and rock crawl.  No matter where you find yourself in the Raptor or what kind of surface you are on, there is a setting for you.  The Baja setting was the most interesting to me, it is for high-speed desert running.

Raptor comes with a very high level of standard equipment.

You also get a 110-volt power outlet, reverse sensing, all power-including power seats, and upfitter switches above the rearview mirror, since Raptor owners tend to add a lot of accessories.

Click Here to Find a Car Pro Certified Dealer Near You

Options include remote start, the Ford tailgate step, (the tailgate lowers from the key fob), a heated steering wheel, and adaptive cruise control.

This truck has a ton of lighting in the bed, as well as spotlights built into both outside mirrors.

From a dead stop, it goes through the gears seamlessly. For the first time I can recall, Raptor is the only pickup with shift paddles on the steering wheel, and with 10 gear choices, I find myself using them often.  If there is any complaint on the transmission, it’s that at freeway speeds, when you go to accelerate, it does a little hunting for the proper gear.  One trick I found that helps this is hitting the tow mode on the side of the shifter, which limits the shifting.

This Raptor with its 4:10 rear axle and high-output engine has amazing acceleration, I was somewhat amazed by it. I turned a 0-to-60 time in barely over 6 seconds. The exhaust sound is great from outside, although it is enhanced inside the cab through the stereo speakers.

Handling with this newly strengthened all-steel frame is fantastic, on and off-road.  Overall, the 2017 F150 Raptor is more refined than in years past, which is one reason they are bringing a premium on the open market.

Raptor fuel economy is improved, but that is not what this truck was built for.  It is rated at 15 city and 18 highway, but if you really push the truck, you won’t get there, but who really cares?

The Ford Performance team has put together a technological marvel of a truck, you just have to experience it for yourself, I can’t do it justice here.