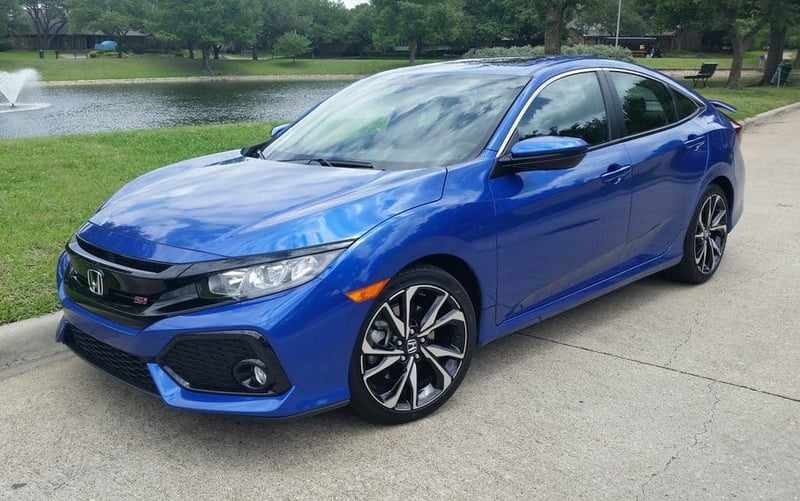 If it takes a huffing, puffing, hard-working turbocharger, taut suspension and screaming styling to get it done, Honda stands ready -- just check out the profoundly blue 2017 Civic Si I had recently.

Sign me up for that makeover, by the way. I could use a big whoosh of turbo boost these days myself.

Five years ago, as you may recall, the crafty Japanese automaker could do no wrong, packing little shreds of performance dynamite into its otherwise modest Accords and Civics.

At their peak, the cars rivaled Volkswagen in their ability to function as grocery-getters and kid-carters while also maintaining gutsy acceleration and sure-footed handling for more playful moments.

Then the fire went out -- doused partly by cost-cuts – and Honda’s spicy meat-and-potato sedans began to taste increasingly stale and bland.

Last year, though, the Civic hummed back to life, getting a thorough redesign with a stiffer, much-improved platform that supported a strange new body and tiny turbo four-banger.

While definitely different, the Si actually looked OK to me, featuring bold swept-back headlamps and a tight upper grille dominated by a big black horizontal bar.

While definitely different, the Si actually looked OK to me.

A hood carved with light definition lines on the edges flowed into a large raked-back windshield and sleek curving top.

Meanwhile, the car’s mostly flat sides got some character with a scallop over the rocker panel and a strong curve above the front wheel-well that faded into a line slicing through the door-handles.

The little sedan even brought a little attitude to my old driveway, sporting nice-looking 18-inch alloy wheels wrapped in 235/40 tires.

Just don’t spend much time looking at the Si’s controversial, angular rear, marred by garish sort-of U-shaped taillamps that tumbled all the way down to the bumper.

I mostly ignored it after my first drive.

Like other new models of the Civic, the Si relies on a turbocharged, direct-injected 1.5-liter four boosted to 205 horsepower in the Si.

Although previous Si models got their punch from slightly larger high-revving engines – which were normally aspirated – Honda needed better fuel economy to keep the feds happy.

The real news with the front-wheel-drive Si is its surprising agility.

Hence, the new 1.5, rated at 28 miles per gallon in town and 38 on the highway – 6 more in the city and 7 more on the highway than the previous generation.

You’ll forget about all of that PC hooey once you start getting western with the lusty little sedan.

Though kind of soft down low – blunted some by turbo lag – the engine begins to awaken around 2,500 rpm, lunging to 6,500 with a good surge of power.

In fact, I spun the tires in second gear a couple of times accelerating in curves and corners.

If you really flog the smooth-sounding engine, the Si will zip to 60 in 6.3 seconds, according to Car and Driver, and you can still tell your California neighbors that you drive an economy car.

The real news with the front-wheel-drive Si is its surprising agility, provided by a multilink rear suspension, and stiffer springs and anti-roll bars.

Push hard into a corner – foot on the gas – and the Si turns in crisply, displaying the deft moves of a sedan that weighs less than 2,900 pounds.

Sure, the ride was quite firm in “sport” mode, but it never got choppy and besides, shifts with the sweet six-speed manual were smooth and positive.

What more can you ask?

Moreover, at $24,775, the Si struck me as real value given its solid combination of performance, handling and economy.

Like the exterior, the Si’s black interior was pretty busy with lines zipping everywhere.

The dashboard, for example, curved around a prominent center stack, dropping onto the mid-dash, which was dominated more or less by a 7-inch display screen.

Like way too many Hondas, the stereo system had touchpads on the screen for tuning. Good luck with that at 80 mph in traffic.

I came to view the Si as a pint-sized athlete with multiple piercings and tattoos.

In addition, legroom in back was decent, while headroom was pretty good. Two reasonably sized adults should be fairly comfortable back there.

I came to view the Si as a pint-sized athlete with multiple piercings and tattoos. It wasn’t pretty, but it sure could dance.

If the green police ever seize my gas-guzzling Mustang, I might just say si to the Si. 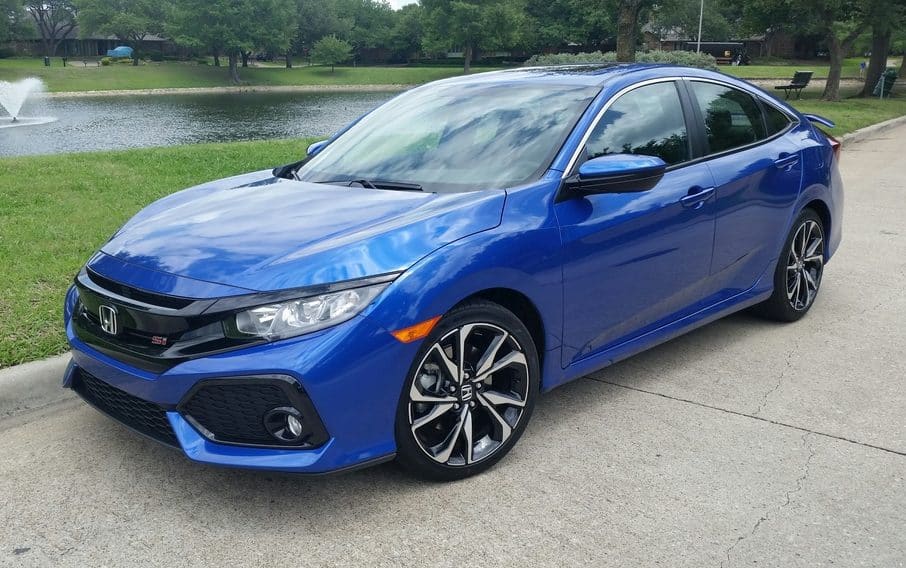 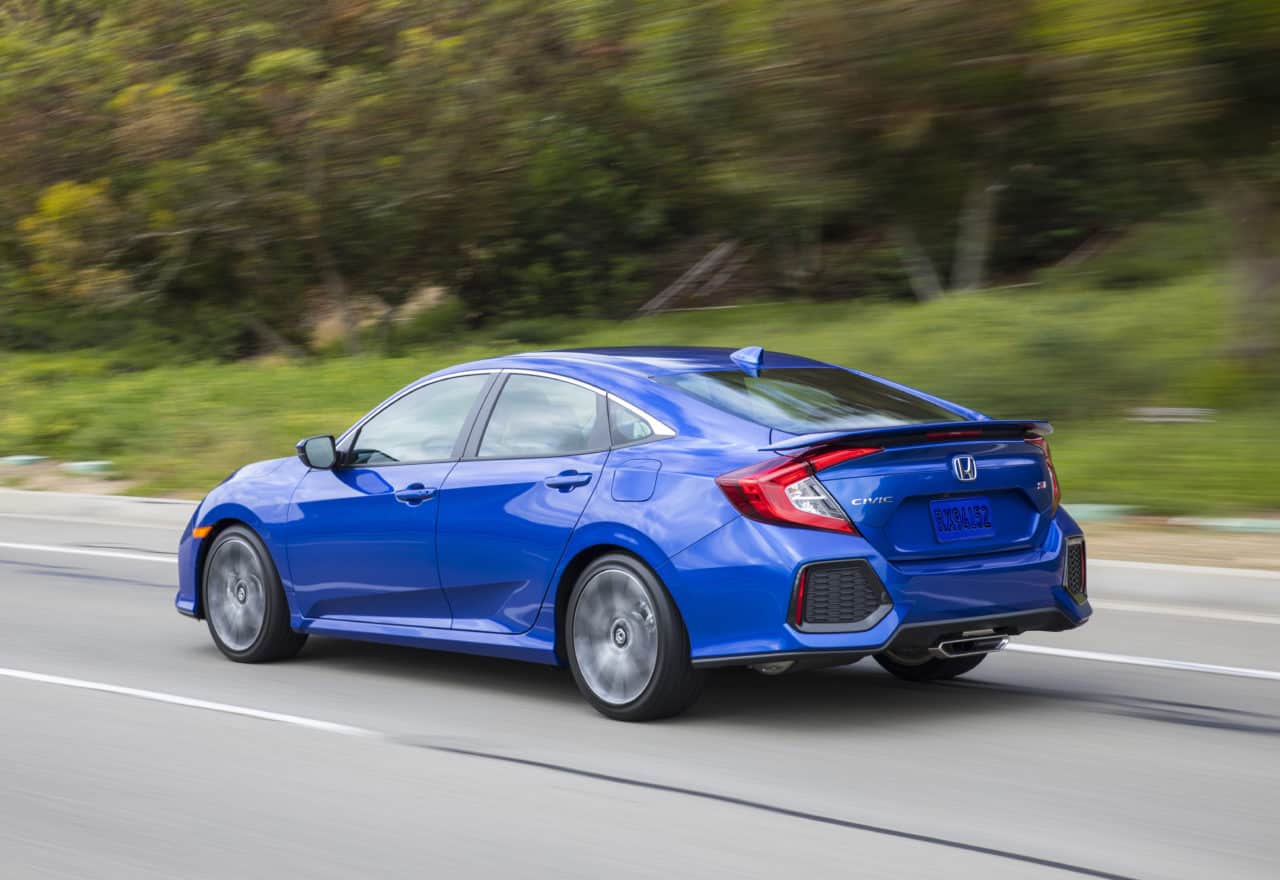 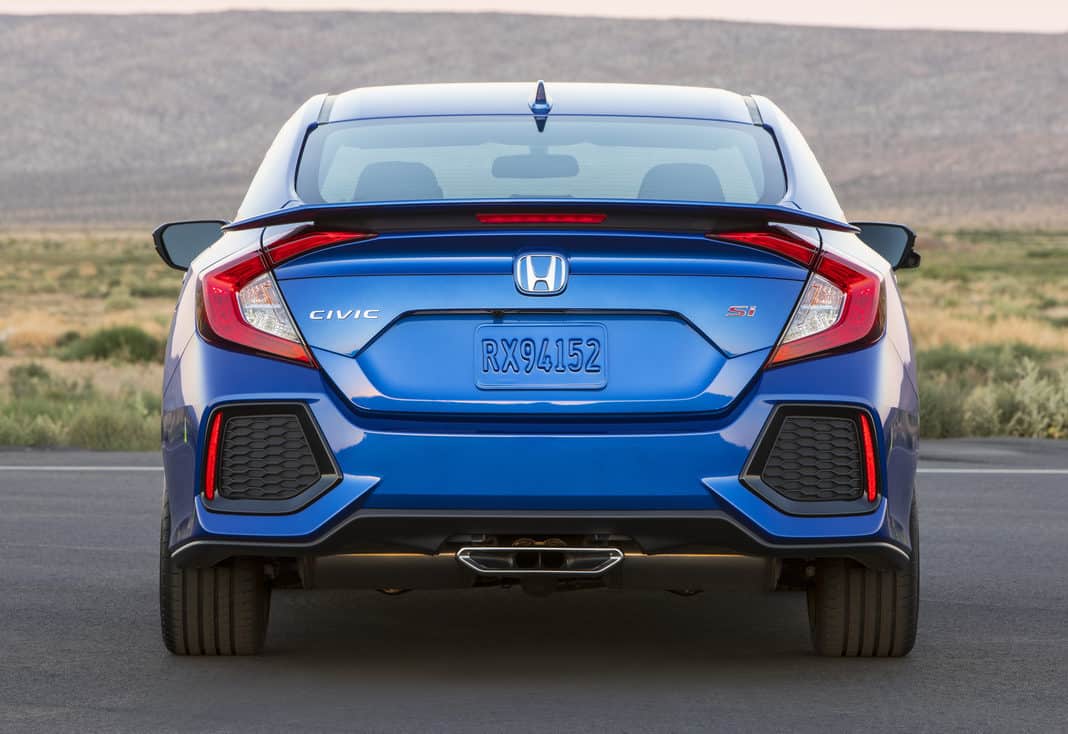 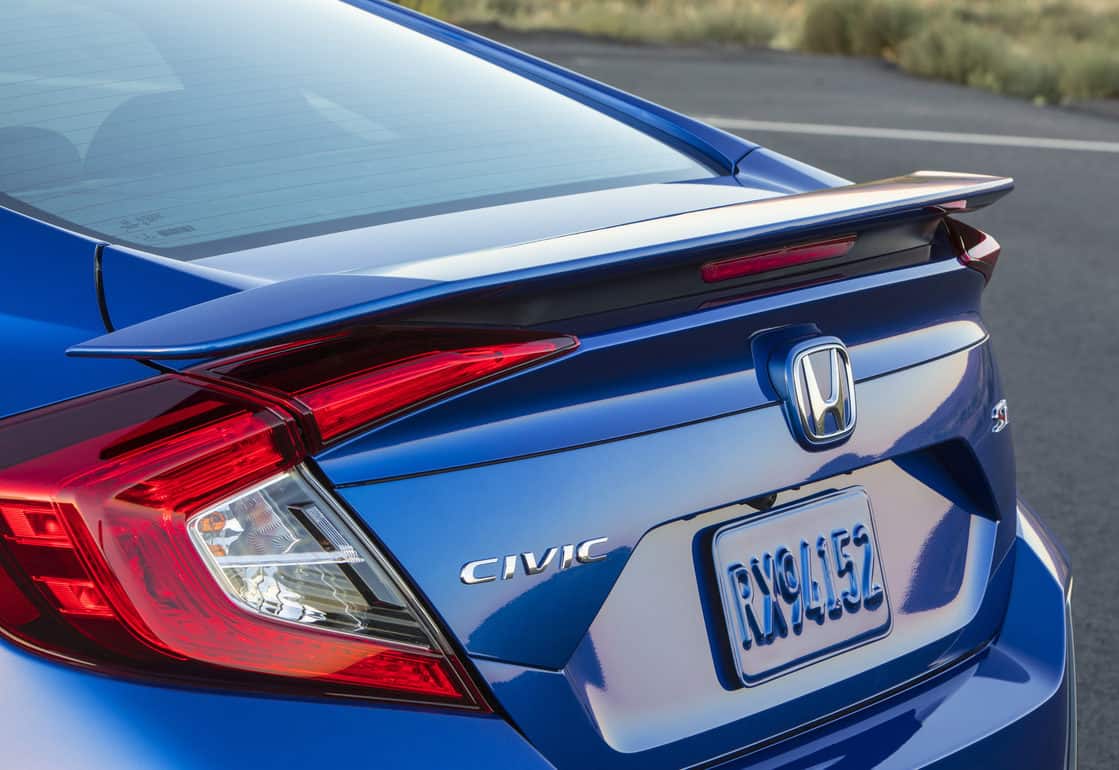 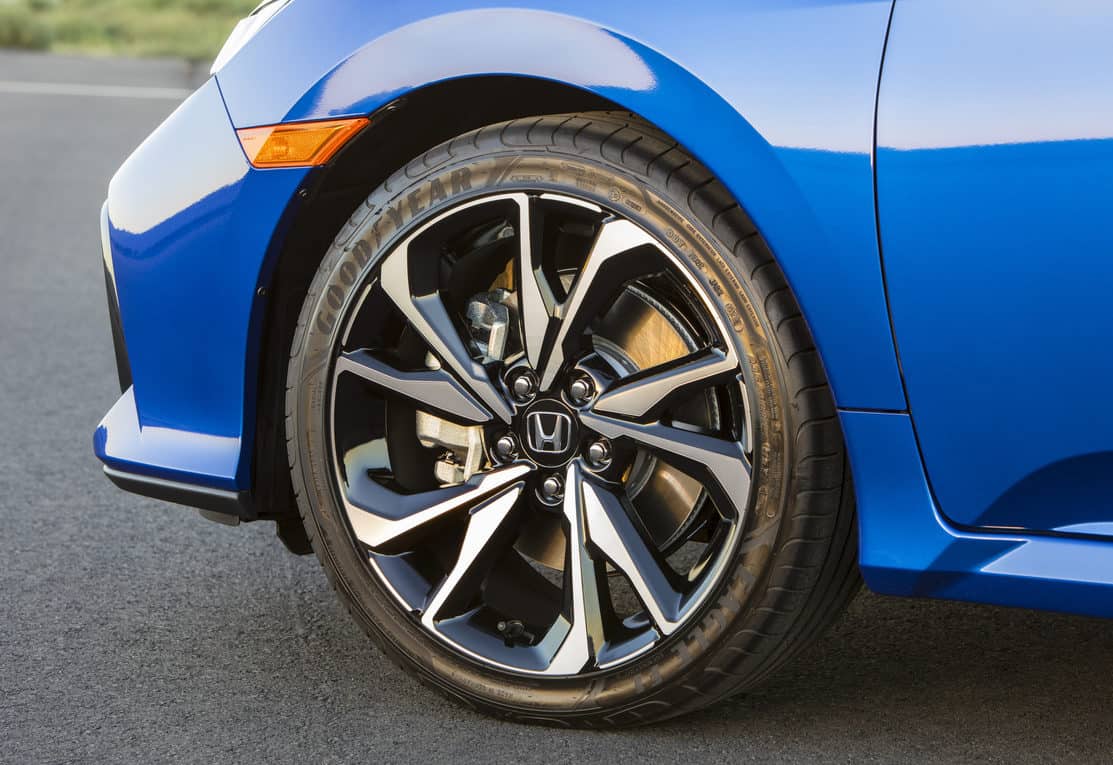 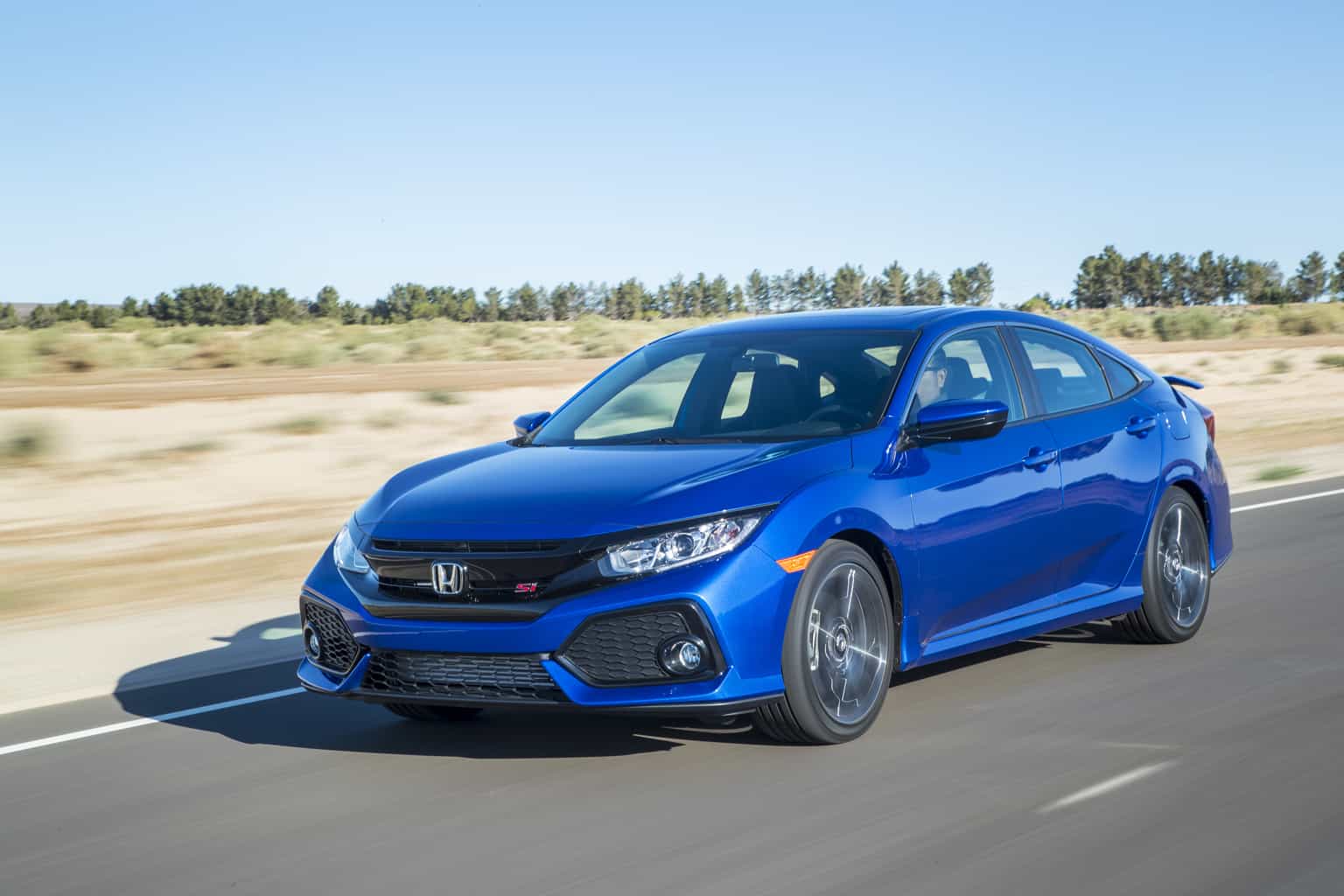 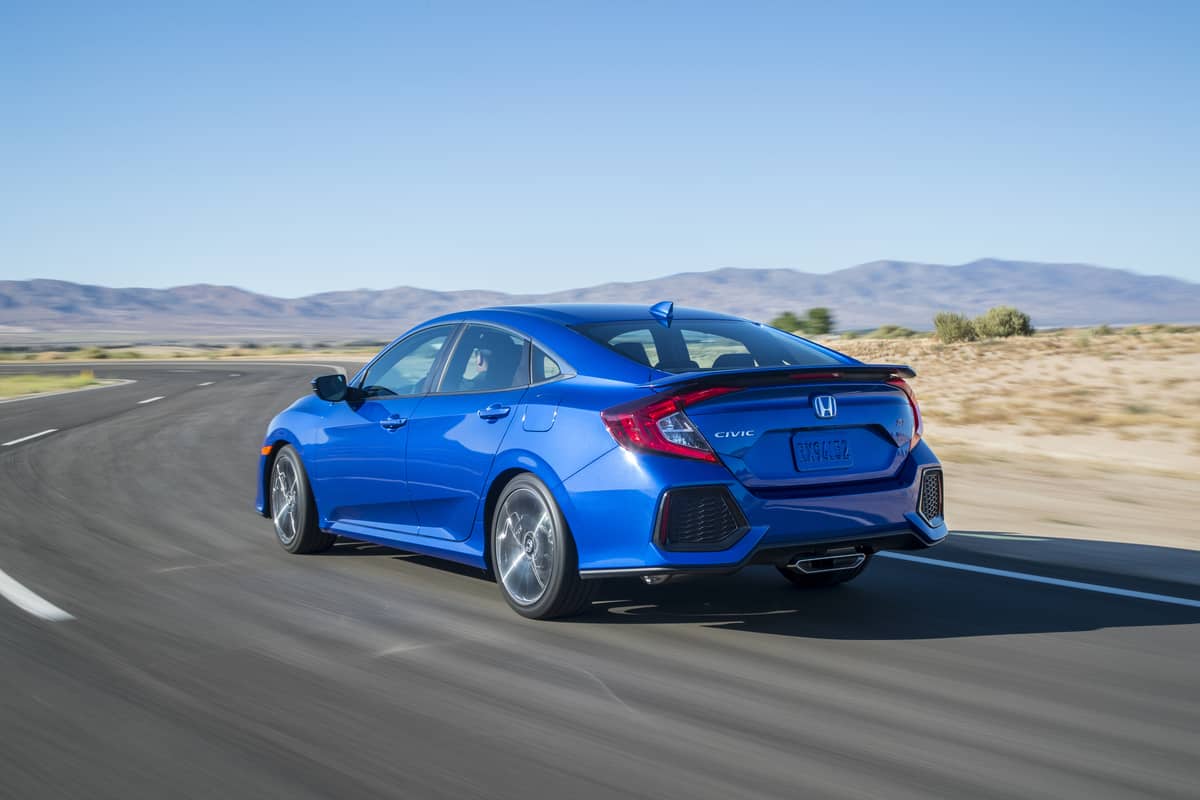 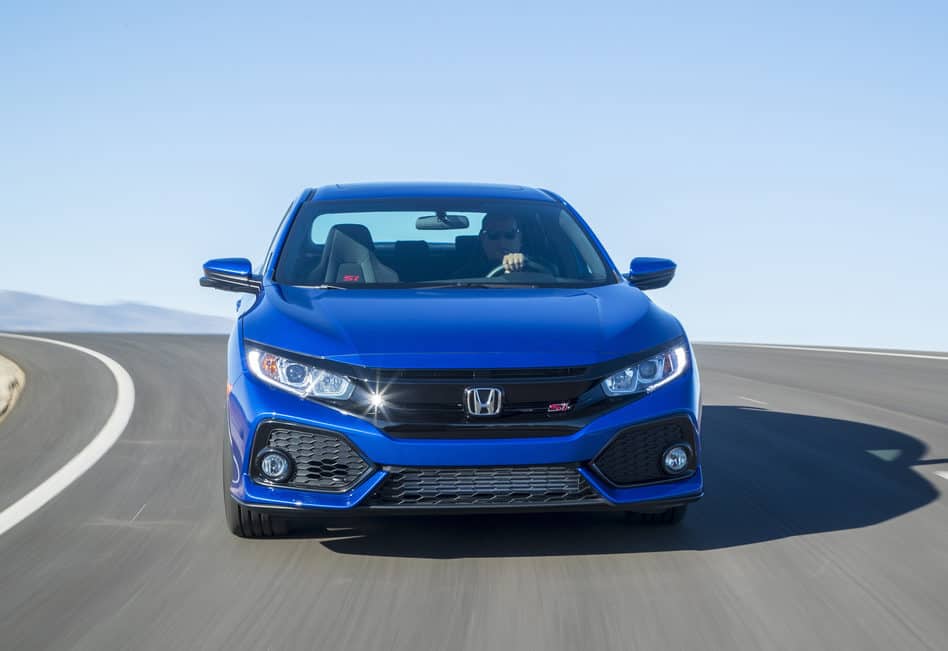 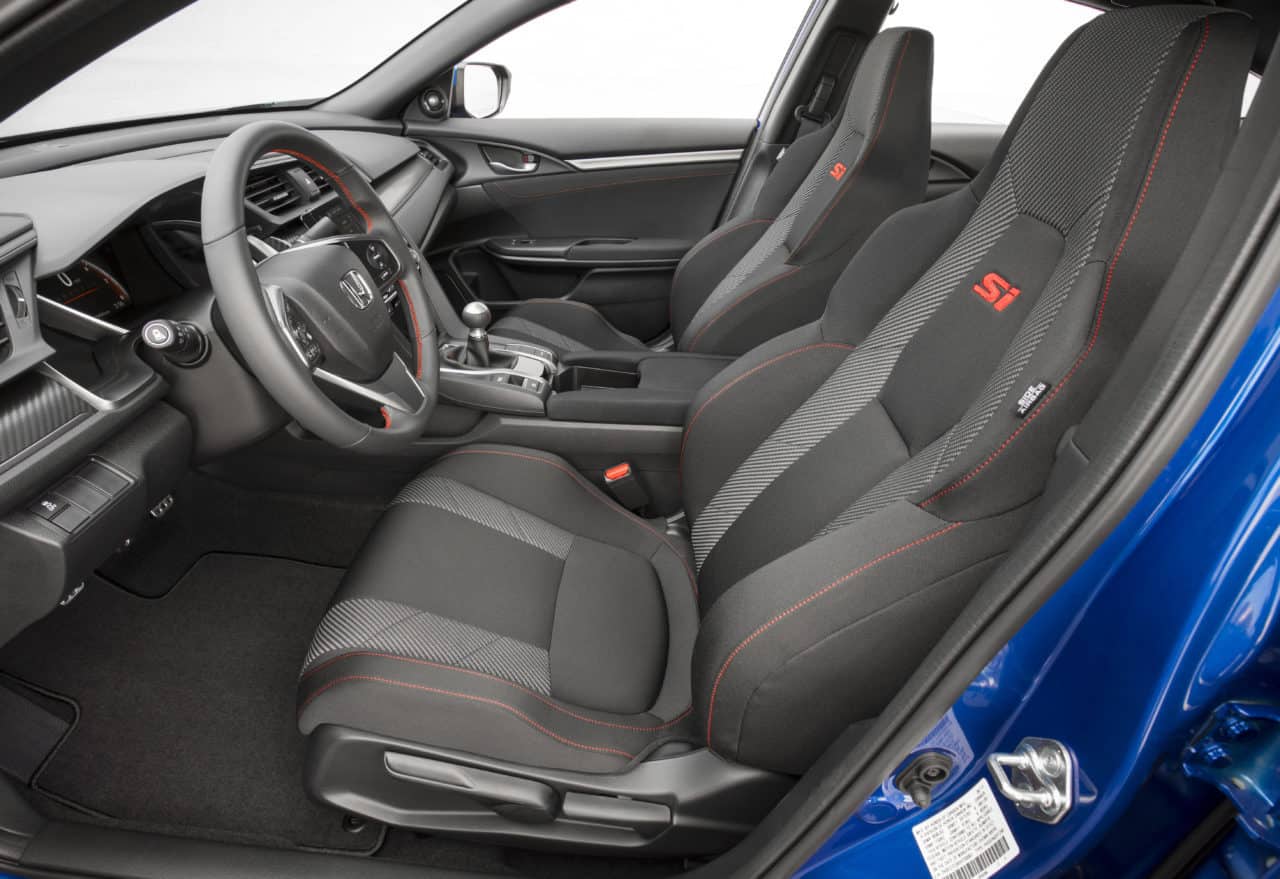