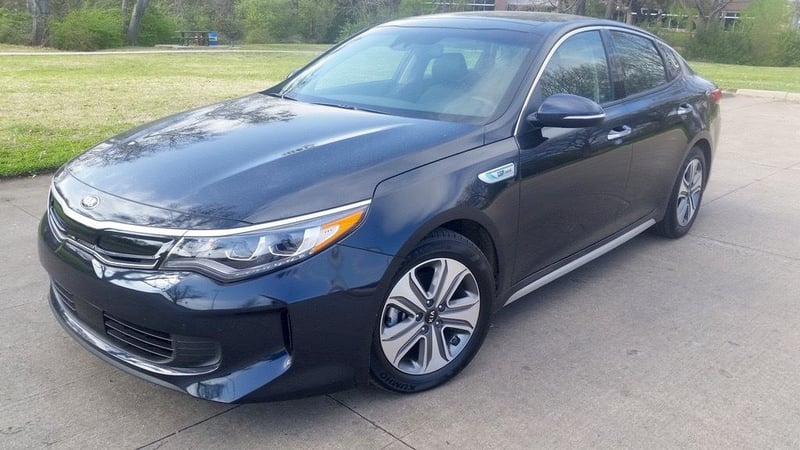 Hybrids always spark images in me of whirring, whining blenders or weed-eaters.

In fact, hand me a Red Bull, please, before I doze off again on the geezer’s bench at Heights Park.

Sorry. I guess I’m more blue than green – a sloppy swirl of colors, none of them probably politically correct.  But hybrids, like blenders and weed-eaters, strike me as technology I don’t really need. I mean, I can still shake or stir a mean margarita.

Don’t get me wrong. I understand hybrid’s environmental value and realize they will likely be the cars of the future once gas gets really tight.  I just wish they were a bit more fun than a root canal.

Kia must have heard my pleas.

The dark-blue 2017 Kia Optima Hybrid EX I had recently actually drove, performed and even sounded like a regular mid-sized sedan – while supposedly getting 39 miles per gallon.

Think of it as your under-cover do-gooder.

As you know, hybrids typically use small gas-powered engines supplemented by electric motors to keep their emissions and fuel consumption down.

With most of them, the electric motors get the vehicle moving before handing the driving wheels to the less-efficient gas engine, but Kia does a couple of things distinctly different than hybrid leader Toyota.

Rather than burden drivers with a droning, continuously variable transmission (CVT) – possibly the dullest transmission ever conceived – Kia couples its motors to a six-speed automatic and tunes them for drivability.

Similarly, you won’t see much green on the sleek exterior of the Optima Hybrid.

Although the sides appeared to be mostly flat – dominated by large doors front and back – they featured subtle curves in them that added another dash of sport.

A simple character line up high on the doors provided some definition, topped by a slinky roof with a nifty slender piece of aluminum trim running the length of its curve.

All of that quiet style settled comfortably on reasonably-sized 215/55 tires wrapped around decent-looking 17-inch wheels.

Like every hybrid I’ve driven, the Optima started in electric silence, with lights on the dashboard, the only clue that it might be awake, but like my second ex, it didn’t stay quiet for long.  Even a slight touch of the accelerator brought the 2-liter four-cylinder to life, emitting a pretty normal-sounding purr.

Coupled with an AC electric motor, the powertrain churned out 192-horsepower and a really solid 271 lb-ft. of torque.

With instant torque from the electric motor, the 3,600-pound Optima departed from stops pretty aggressively, accelerating with a distinctly four-cylinder exhaust note.

Though it felt faster in sport mode than it really was, the Optima can accelerate to 60 mph in a reasonable 8.1 seconds and has a top speed of 130, according to Car and Driver.

Just for the record, that is nearly 2.5 seconds faster to 60 than the smaller Toyota Prius – and the Kia doesn’t look like something straight off the set of Star Wars 47 or whatever they’re on now.  Of course, the Prius gets 50-mpg overall fuel economy, compared with the Optima’s 42, but that won’t keep me up at night.

I was more intrigued with how the Optima gathered speed like any other mid-size sedan, winding through real gears and making true shifts.

In addition, the steering was nicely weighted and the brakes felt normal. As you may recall, most hybrids rely on regenerative braking, which can be as sudden and grabby as a Washington politician.

Although the Optima was clearly tuned for comfort, it handled moderate-speed corners and curves pretty well, leaning some but keeping its cool.

Maybe best of all, the big sedan didn’t lapse into techno-dork inside, mostly avoiding those inscrutable gauges in some hybrids showing which motor was doing what and how well.

Except for one power gauge, the simple black interior in my Optima felt pretty average – maybe too average considering its $37,000 price tag.  A flat-topped dashboard, for example, curved over the instrument panel and around an 8-inch display screen.

Two thin horizontal panels beneath the display screen provided buttons and knobs for the stereo and climate systems, and a conventional shifter protruded from a broad console.

Though the door panels also were hard plastic, they featured almost elegant lines, as well as padded centers and armrests.

Likewise, the subtle black seats were sectioned with perforated centers and offered exceptional leg- and headroom in back.

It all seemed to mostly match the Optima’s low-key personality as Dudley Do-Right in jeans and a T-shirt. 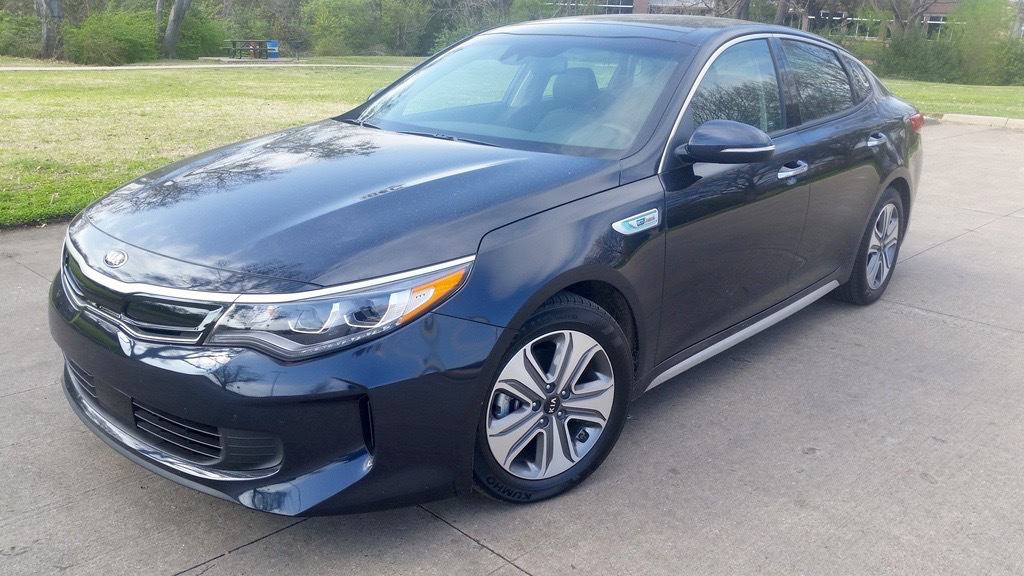 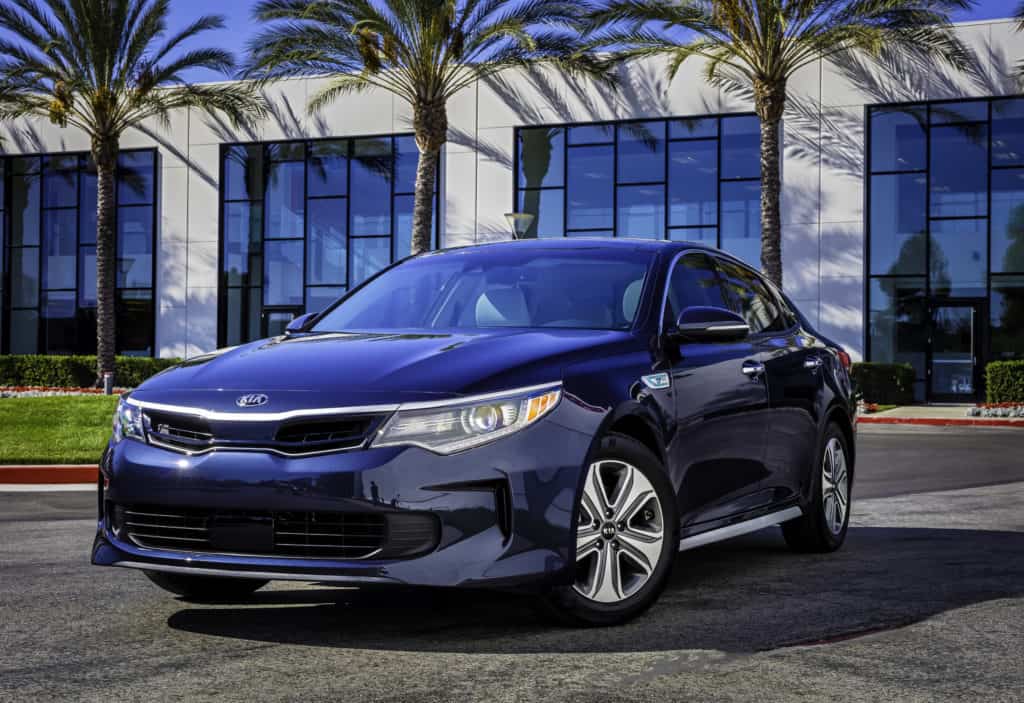 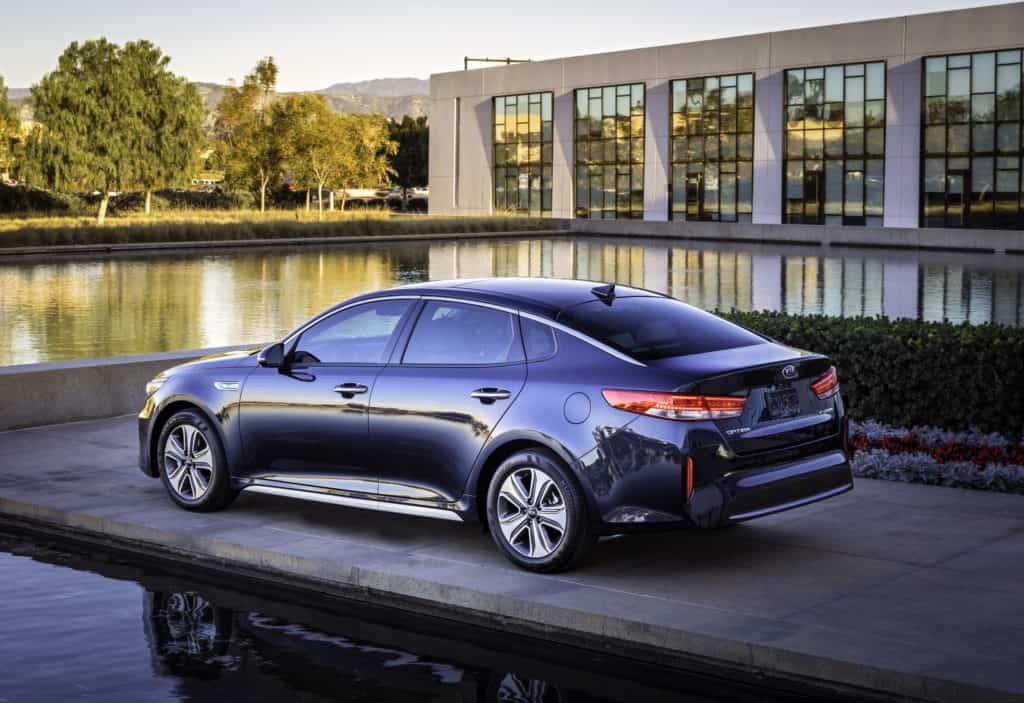 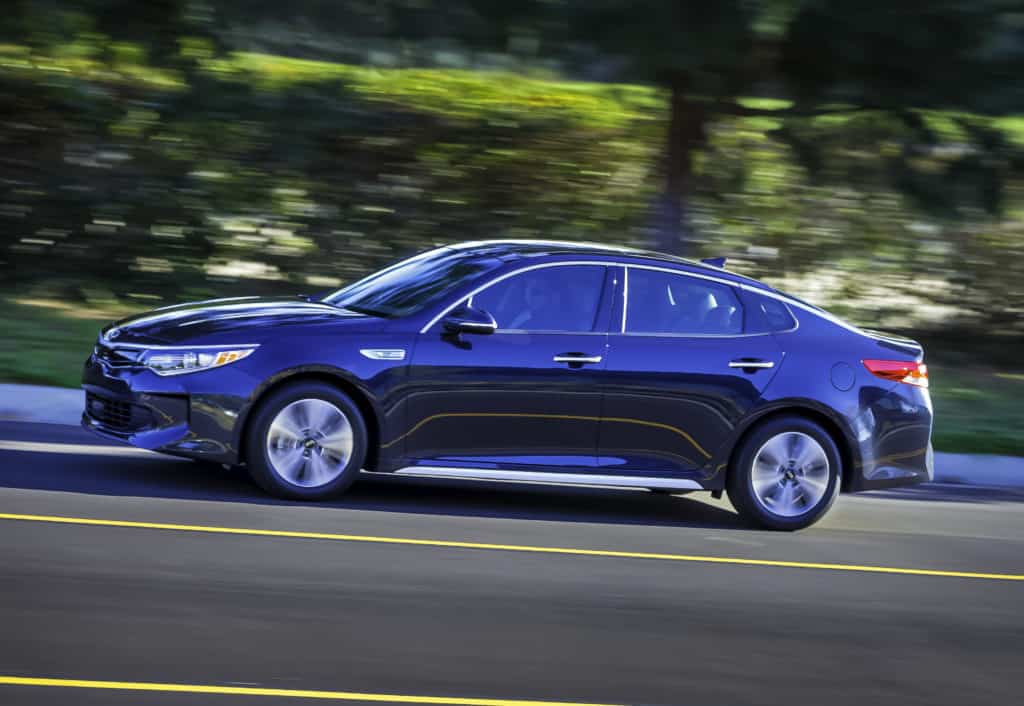