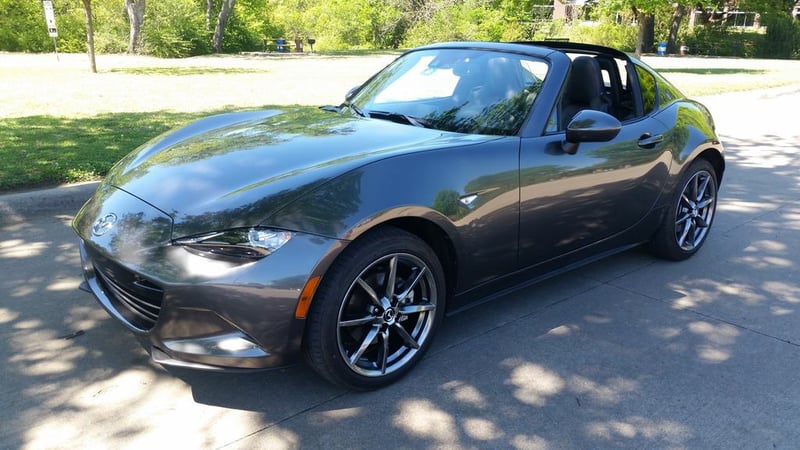 Call me slightly twisted, but I like leaping into 500-horsepower hurricanes.

I mean, life is just too darn short for slow cars and angry women – and so am I.

Twenty years ago, though, I got my first taste of a tiny Mazda Miata, a tight, superbly balanced sports car that showed me I didn’t need to go fast to savor the drive.

Granted, that sounds sort of like a party without beer.

The Miata – the spiritual and much better built successor to old English sports cars like the Lotus Elan – doesn’t merely take to the open road. It seizes every inch of it, reeling in sharp curves with a grace and precision that few cars of any kind can match.

Get this: Since their introduction in 1989, Miatas have always relied on four-cylinder engines roughly the size of a sewing machine – most of them huffing and puffing without even the benefit of a turbocharger.

Believe me: This Miata thing tugs hard at my deep muscle-car roots.

The 2017 Miata MX-5 Grand Touring RF I had recently – the fourth generation of the Miata – continues to exert considerable pull.

Despite the decades that have passed since the little sportster’s introduction, the MX-5 remains absolutely true to the lightweight, rear-wheel-drive Miata Way.

Still very much a taut two-passenger roadster, my metallic gray Miata sported an optional steel and aluminum folding top that when retracted, left a targa-style hoop with a glass back-window behind the passenger compartment.

A blacked-out lower grille added to the image, as did smooth sides with a slight muscular curve in them.

Lean and low, the Miata hunkered down on smallish 205/45 tires wrapped around eight-spoke 17-inch wheels.

Though the four-foot tall Miata looks tiny in a world of 5,000-pound pickups and SUVs, it is longer, wider and a bit more comfortable than its oily English predecessors.

Nonetheless, the car weighs a bantam 2,500 pounds – an impressive achievement by Mazda and especially good news for its skinny engine.

I’ve never been a fan of Mazda’s SkyActiv motors and one of its smallest resides beneath the alluring hood of the Miata, a 2-liter four-banger pumping out 155- horsepower. As I recall, when Mazda began hyping the efficient SkyActiv engines, they were supposed to be these small high-compression hammers.

Instead, they feel pretty soft – though the Miata gets a decent tune that gives it some kick to about 3,500 rpm or so.  The engine in mine spun a pretty decent six-speed manual, emitting a smooth, rich-sounding exhaust note.

It pulled nicely from stops, feeling kind of torquey and hinting that there might be more to come. While quick enough – 60 mph arrives in 6.5 seconds, according to Car and Driver – the engine kind of sagged as it approached 4,000 rpm and lost its surge.

With a slightly notchy six-speed manual at hand and a superb suspension beneath me, I often found myself at red-line.

My cure, short of a turbocharger: Find a bunch of really tight curves.

Dive into them fast and the zesty Miata will turn in quickly and flatly, drifting lightly on its grippy little tires.

If you get sloppy, the car’s balance is so good that you can correct in a corner without sliding into a curb and looking like some flatland goober.

Moreover, the steering might be the best I’ve experienced -- extremely quick with great road feel and the sort of weighting that gets tighter as you turn the wheel.

However – and you probably knew this was coming – there’s a price to pay beyond the MX-5’s reasonable $34,000 window-sticker.

The car rides pretty rough, its firm suspension constantly in motion. It really wasn’t bad on my suburb’s fairly good streets, but I might hesitate to drive one to Denver – until I thought about those mountain roads.

Hey, at least you would bounce around in a pretty nice environment. The black interior in the MX-5 I had looked elegantly spare and functional.

A relatively shallow, plastic dashboard, for example, rolled around a large hood over the instrument panel, featuring a big center-mounted tachometer.

Just to the right, a 4.6-inch display screen about the size of an iPad rose from mid-dash, providing as much information as I needed – and a few occasional challenges.

While round knobs beneath the screen controlled the climate system, the stereo relied on touchpads on the screen and a selector dial on the console.  My elbow hit that cursed selector dial five times while shifting, effectively knocking my Outlaw radio station off the air.

Being a computer dolt, I had to pull over to retune the blasted radio, putting myself at risk for a driving-while-disconnected ticket.

I had no complaints with the all-important leather seats. Highly supportive, they featured sectioned centers with subtle red stitching on the bolsters.

In addition, the top lowered and folded into the trunk at the touch of a single button.

Storage, though, was limited to two cup holders on a rear panel behind the seats and a small compartment there.  Who cares? The only thing Miata enthusiasts want to haul is backside – and the new MX-5 provides that in a unique, distinctive way. 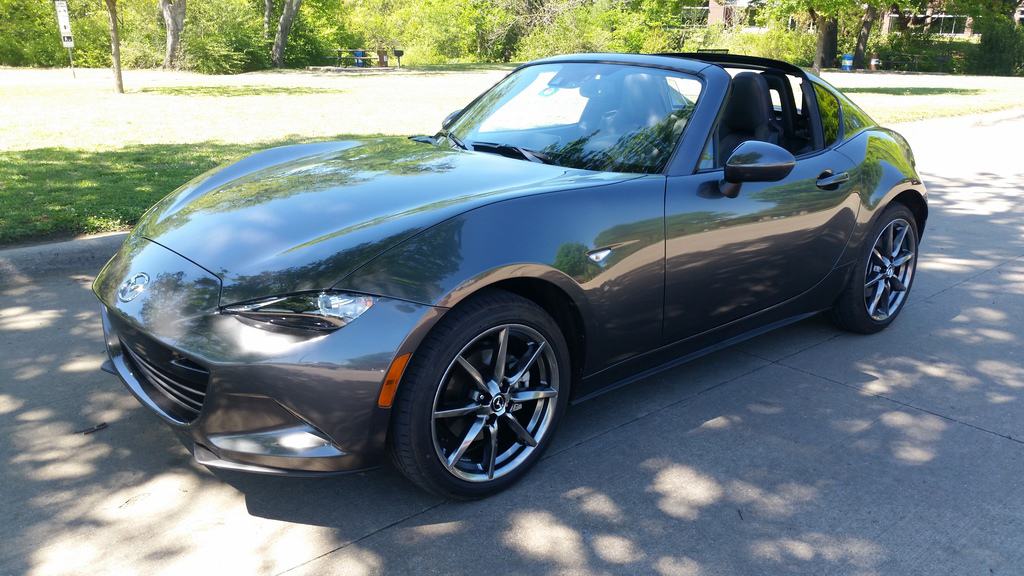 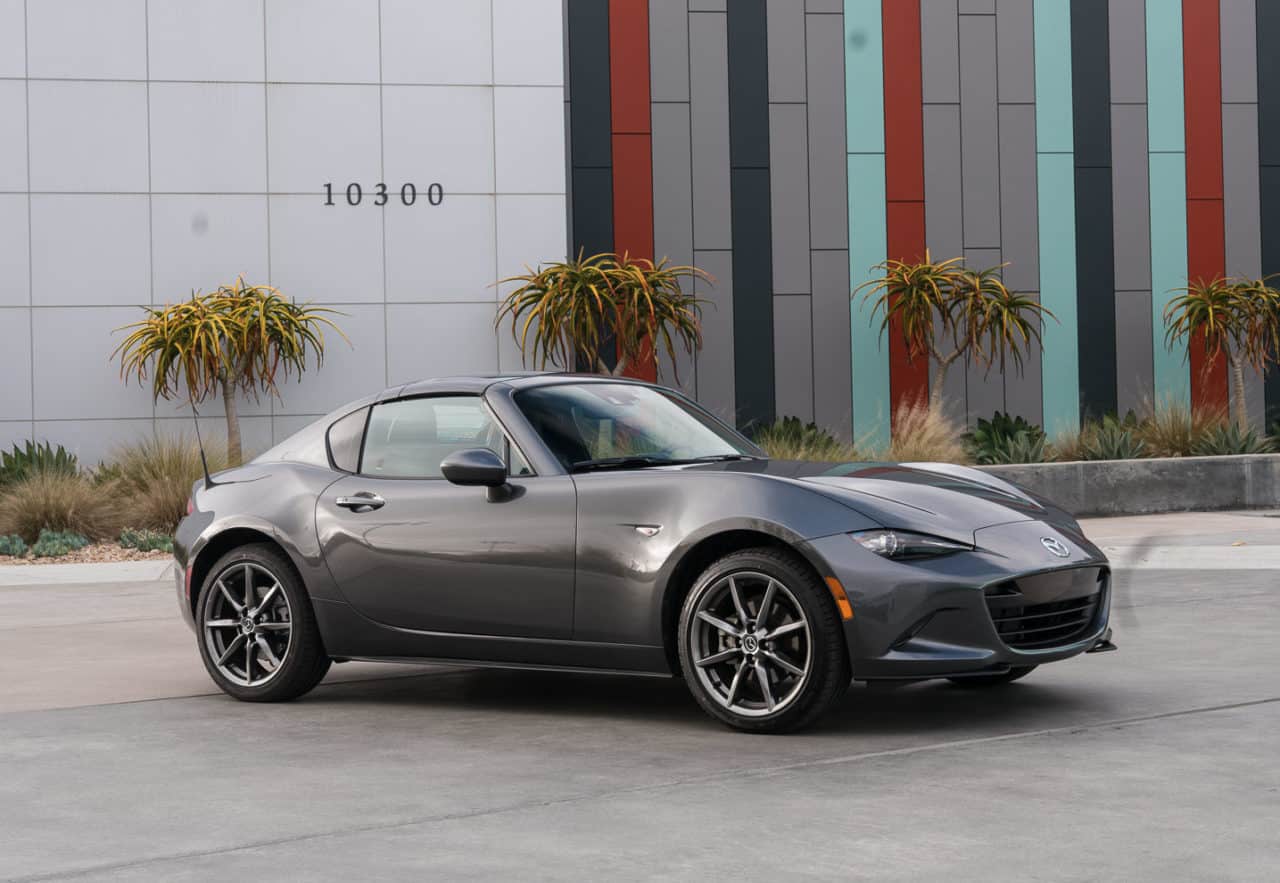 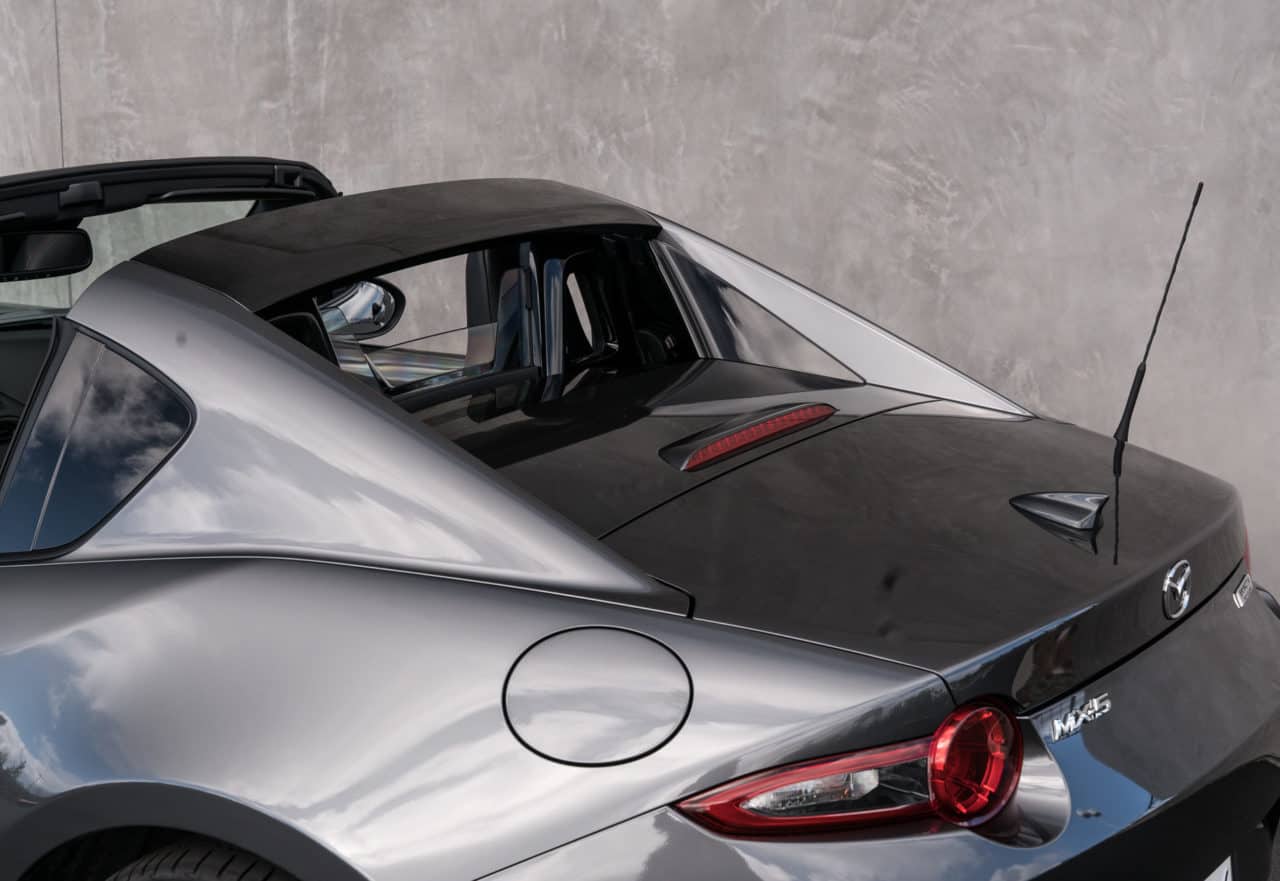 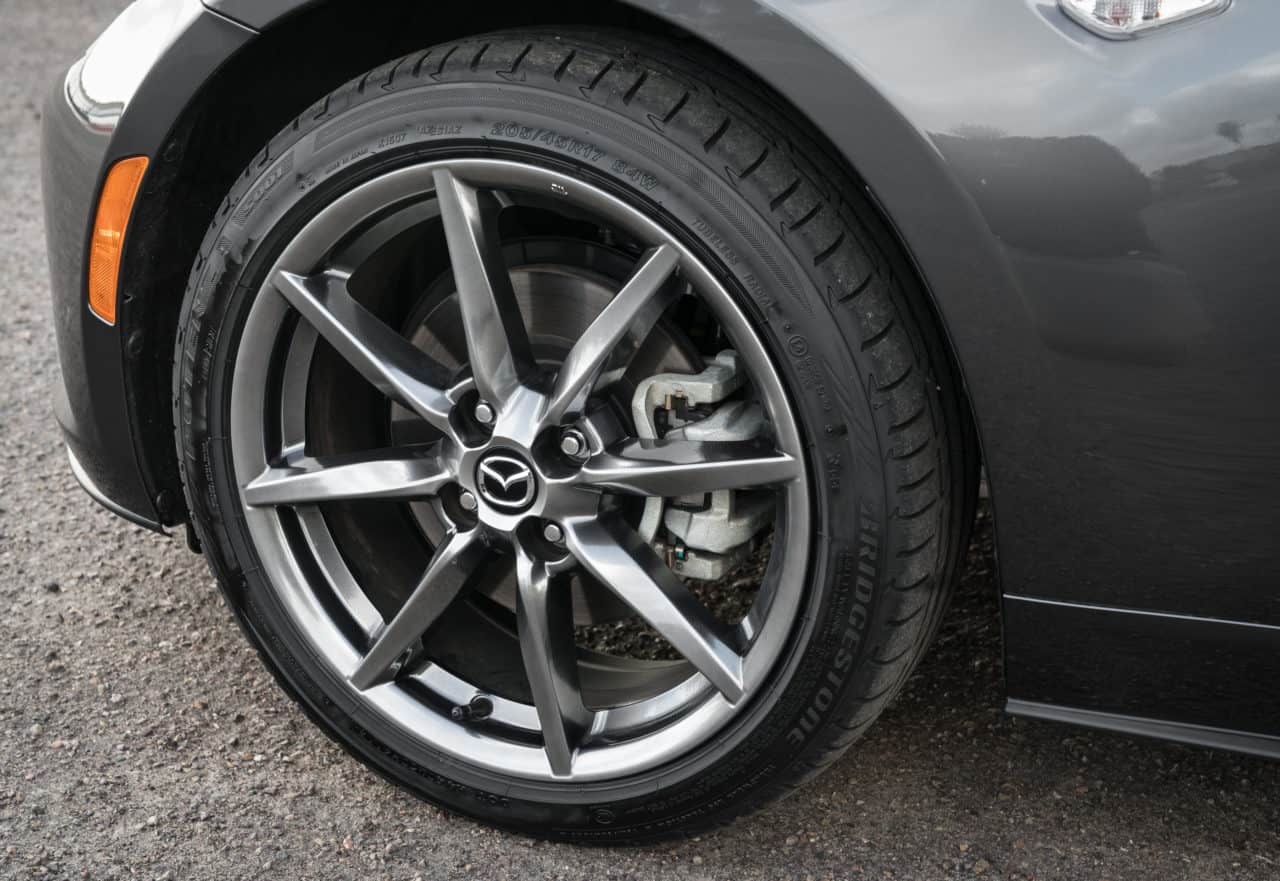 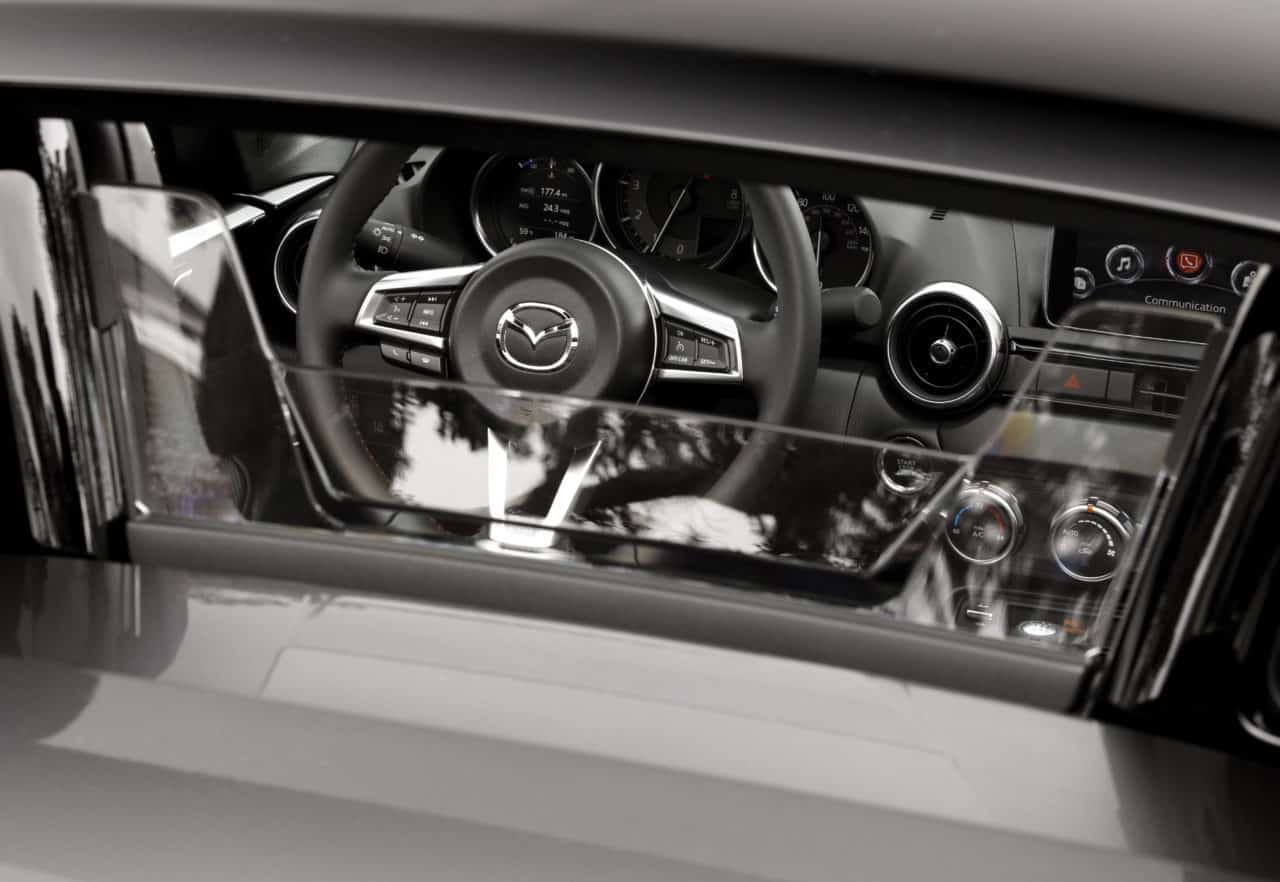 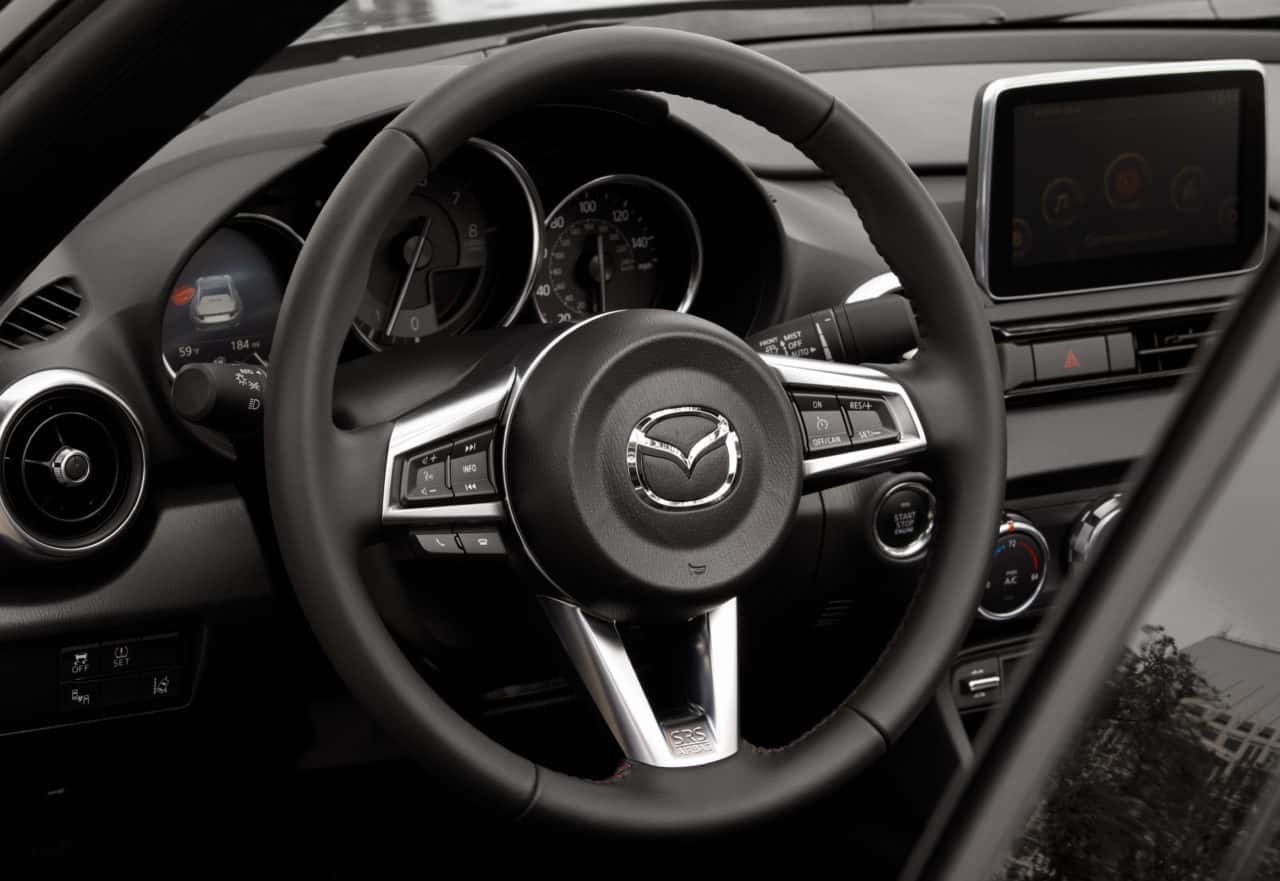 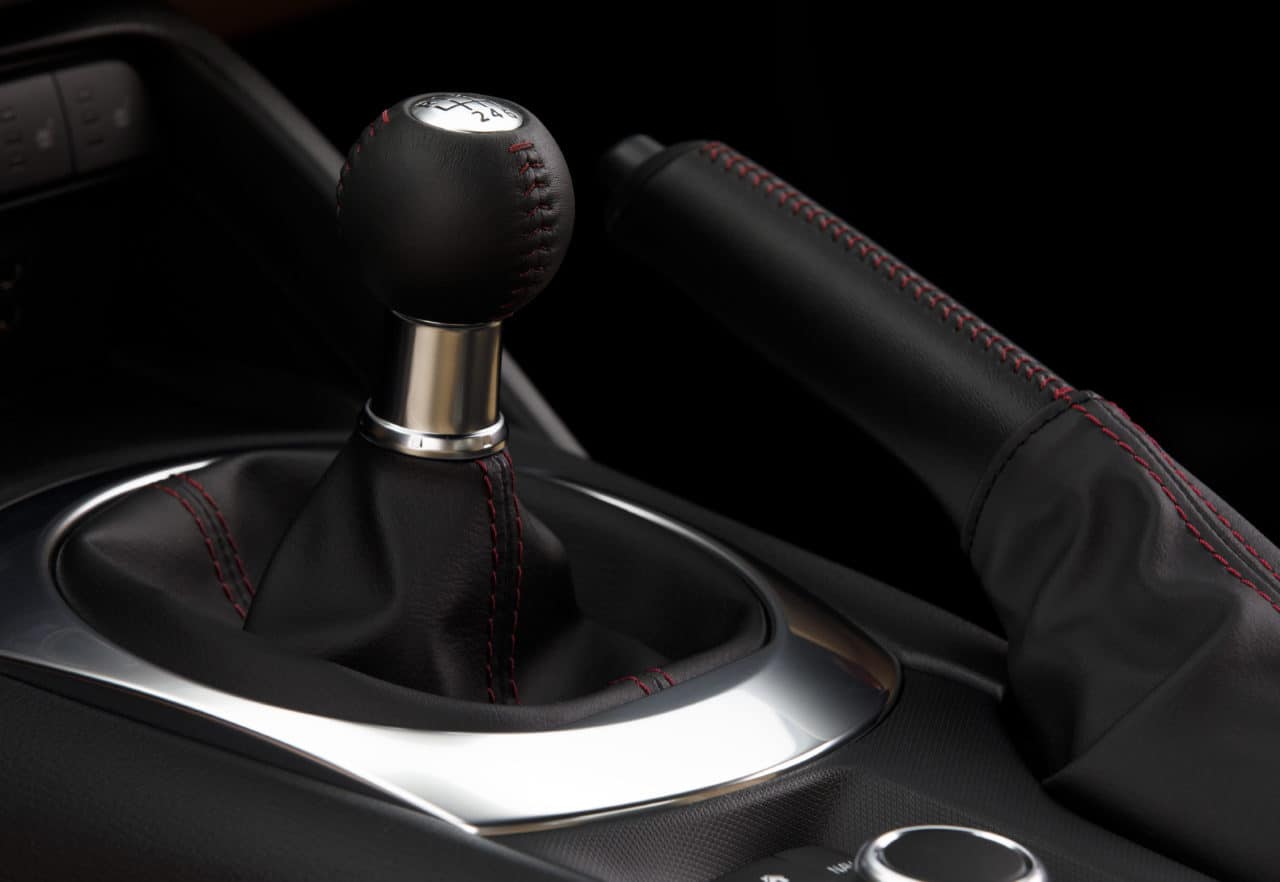