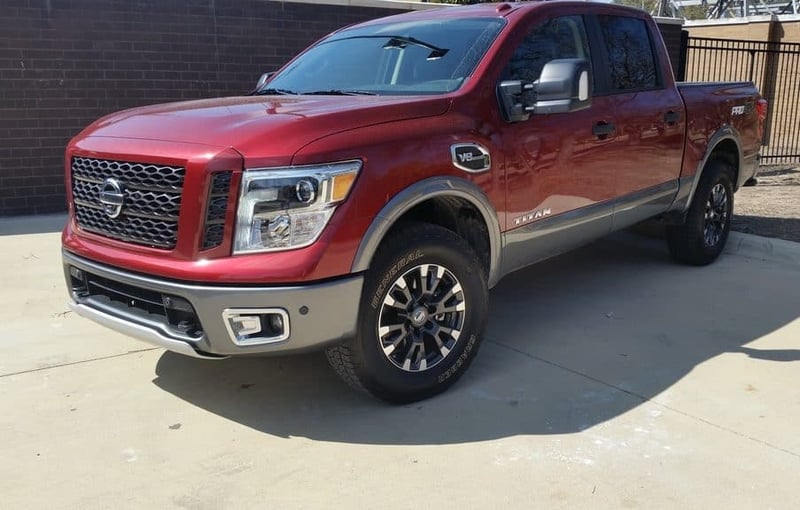 This week Terry Box is behind the wheel of the 2017 Nissan Titan.  Terry is a Car Pro car reviewer and was the automotive writer for the Dallas Morning News for 23 years until early this year.


Bigfoot barely fit on my driveway, casting a shadow so long and tall it killed some of the grass at Chateau Box.

Small cracks on the concrete still mark where I parked the mammoth 2017 Nissan Titan I had recently – a pickup so large I needed a running start to clear the cab.

OK, those might be slight exaggerations, but with the all-new Titan, Nissan got really serious about competing in the overblown full-size pickup segment, offering a truck about as big as your average mid-century bungalow – just like everyone else.  It may be working.

For more than a decade now, the ironically named Titan has been the runt among big pickups, often struggling to unload as many trucks in one year as class-leader Ford sells in a month.

In 2016, though – the first year for the mammoth new Titan – Nissan’s big-truck sales nearly doubled, to 21,880. While still small, it’s an encouraging start.

When the new Titan was unveiled at the Detroit auto show a couple of years ago, I grumpily concluded that it looked like some Chinese knock-off of the Ford F-150.

For whatever reason, the wine-red Titan Pro-4X crew-cab I had seemed to shimmer with presence of its own – though still sporting lots of familiar lines.

However, its big front fenders, which seemed out of proportion to the rest of the three-ton pickup, just looked awkward to me.

Moreover, the truck still wears an F-150 “mirror-dip” in the front doors and a subtle spoiler-lip atop its tailgate – just like the F-150.

That package – one of five Titan models – is sort of the off-road option, providing four-wheel drive, a pretty credible suspension and beefy 275/70 mudder-style tires on good-looking multi-spoke wheels.

As on all new Titans, fairly subtle curved character lines graced the front and rear fenders of the Pro-4X, while the flat-looking sides benefited from a slight curve in their surfaces and gray cladding down low.

I think Bigfoot had a taut, strong-looking top, too, but I couldn’t jump that high. Get this: my Titan stood 77 inches tall (6-feet, 5 inches), dwarfing many Texas sheriffs and all autowriters.

Fittingly, the truck emitted a fine-sounding rumble from its 5.6-liter, 390-horsepower V-8, now tied to a refined 7-speed automatic transmission.

As you may recall, the original 2004 Titan also had a 5.6-liter V-8, but the new, better- developed engine spins out 70 more horsepower than that motor and feels vastly more sophisticated.

While Nissan also offers a version of the new Titan powered by a Cummins diesel V-8 called the XD, it weighs as much as some heavy-duty pickups and can only tow about 30 percent more weight than regular Titans.

It definitely performs better in daily driving. Even slight jabs at the accelerator are rewarded with a rich surge of torque.

Stay on it hard and the Titan will accelerate to 60 in a swift 6.4 seconds, according to Car and Driver, its seven-speed automatic clicking off quick, smooth shifts.

Take a deep breath and put it on the floor and the gutsy 5.6-liter V-8 pulls pretty hard to 6,000 rpm or so – an experience sort of like hanging onto a house in a mudslide.

The downside: 15 miles per gallon fuel economy in town and I rarely saw more than 13.5 mpg.

Needless to say, I didn’t push the teetering Titan through any high-speed corners. I was pretty sure the truck had nice paint on top and I wanted to keep it that way.

In addition, its steering felt kind of thick and slow, though it maneuvered Bigfoot through curves pretty well, shrugging off a bit of body lean.

Nonetheless, you won’t forget what you’re driving when you’re cruising down city streets.

Although the Titan sported Bilstein Off-Road Monotube shocks, its ride varied from busy to bruising depending on the road surface, particularly at speeds below 40 mph.

Fortunately, I got to bounce around on some pretty nice black leather – as you might expect in something costing $52,000.

Like the exterior, the interior seemed a bit exaggerated, with an expansive black-plastic dashboard curving over a large instrument panel and even bigger center-stack.

The stack housed a 7-inch display screen, as well as a voice-recognition system for the navigation and audio systems.  It also provided a USB port and iPod Connectivity.

While the door panels were totally plastic – which seemed alright in a semi-off-road truck – the leather seats were sectioned, stitched in white and featured comfortable bolsters.

Leg- and headroom in back was lavish, of course, though a rent-car gray headliner sort of sullied the truck’s overall upscale feel.

Still, I liked the Pro-4X Titan much more than the diesel-powered XD model I had earlier.

In fact, the Toyota Tundra – the No. 5 truck in the segment – might want to keep a close eye on that speck in the rear-view mirror, the one growing larger.