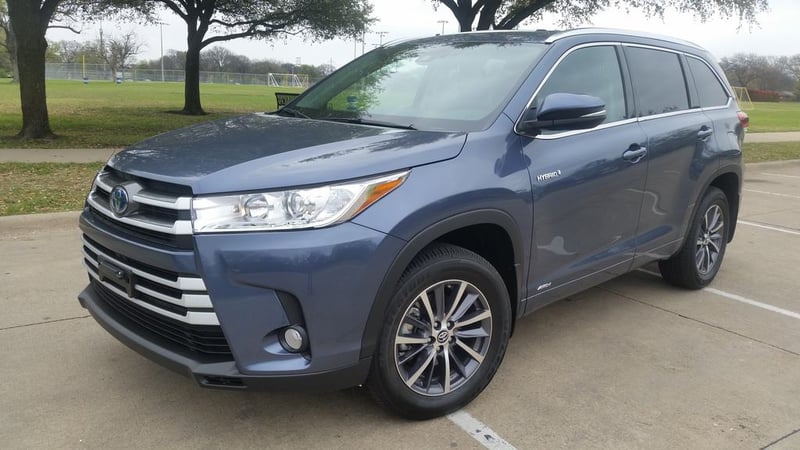 Terry is a Car Pro car reviewer and was the automotive writer for the Dallas Morning News for 23 years until early this year.

Life sometimes seems as badly scrambled as one of my swollen, orange-colored omelets.

My strange mishmash of stuff typically emerges looking like something scraped from the inside of a nuclear reactor.

I’m tempted to call the Haz-Mat squad to help me pry it from the pan.

Odd mixes appeared to be the flavor of the day recently when I got a 2017 Toyota Highlander XLE Hybrid, a blend of heavy crossover, spirited V-6 and soft hybrid technology.

To be honest, I didn’t really get it. Why take a complex hybrid powertrain that buyers are largely rejecting in these days of relatively cheap gas and drop it into a popular crossover?

It struck me as being a lot like the raw spinach I squeeze into my glow-in-the-dark omelets – my laughable attempt to make something appear healthier than it really is.

In fact, the Highlander Hybrid gets the same fuel economy on the highway as a non-hybrid V-6 Highlander – about 27 miles per gallon. In mostly city driving, I averaged about 23 mpg.

So I found it all pretty baffling – but then, I once married a cold-blooded woman with a .38 revolver and several secret bank accounts. I may be a tick or two shy of smart.

Here’s the Hybrid’s upside, though: with a stout V-6 supplemented by an instant-torque electric motor, it is ironically the most powerful (306 horsepower) and fastest Highlander Toyota builds.

Moreover, the Hybrid is only $1,350 more expensive than the regular Highlander, allowing you to fly your green flag high for a relative bargain.

What more can you ask – other than maybe one of those mattresses made from rice husks and a couple of solar panels? Talk to Toyota.

My grayish-blue Highlander Hybrid looked mostly like a big, truckish crossover, largely free of any exaggerated hybrid badging or strange tires and wheels.

Like all new Highlanders, it faced the world with a huge protruding grille and headlamps, as well as a long hood that added to the truck’s clumsy front overhang.

Fortunately, the sides shone with a little more style, featuring nicely curved surfaces that toned down the Highlander’s bulk and a distinctive slab of flat-silver trim running the length of the top.

In back, large taillamps wrapped around the hatchback, sticking out as much as the headlamps. (I wonder what was on the designer’s mind?)

The big crossover started in silence – mute evidence of the complexity of its drivetrain.

At start-up and low speeds, the Hybrid generally relies on its electric motors to get up and moving, giving you the potential for crawling quietly into the garage at 3 a.m. Not that you would ever do that, of course.

The combination of a healthy, direct-injected V-6 and two electric motors churn up the 306-horsepower and deliver surprising leaps away from stops.

Beyond 30 mph, the surge begins to wane some, but the 4,900-pound Highlander can still lumber to 60 mph in an impressive 7 seconds flat, according to Car and Driver.

Its sources of power include the 3.5-liter V-6 and an electric motor that drive the front wheels and a smaller electric motor on the rear axle that provides on-demand all-wheel-drive.

It’s too bad Toyota couldn’t be like Hyundai and Kia, which couple their hybrid powertrains to real transmissions.

In the Highlander, power gets distributed to the wheels through a moaning continuously variable transmission (CVT) whose belts and pulleys can’t provide real upshifts or downshifts.

Under hard acceleration, the Highlander sounds to have a small dairy farm stashed beneath its hood.

However, drive it like an adult – something that has eluded me for decades – and you will hardly notice the CVT, which is supposedly more efficient than a regular transmission.

Acceleration, incidentally, is the Highlander’s strength –a mighty odd statement to make about a 2.5-ton crossover, I admit.

The vehicle’s steering felt soft and overly boosted with virtually no road feel and the ride seemed pretty busy and fidgety for something as large as it was.

The ride tended to improve at speeds over 40, though handling in the tall, thick crossover was still strictly limited to low-speed corners – as you might expect.

With a $44,000 window-sticker, the Highlander falls a little short of near-luxury and its black interior kind of reflected that.

Plastic is mostly the flavor of the day, though with some style in its presentation.

Buttons and knobs beneath the screen mostly controlled the climate and audio systems, while a handy sculpted tray beneath the lower dash offered space for all sorts of suburban paraphernalia.

As always with Toyotas, you get a full load of nannies, including pedestrian detection, lane-departure alert with steering “assist” and “dynamic” cruise control.

The family-oriented, 8-passenger Highlander also had three rows of seats, though the folding back row should be reserved for kids and icy exes.

Seats stitched in smooth black leather offered decent support and tremendous leg- and head-room in back, and looked upscale with their stitched bolsters and sectioned centers.

I’m just not sure it makes any more sense than allowing me to cook you breakfast. 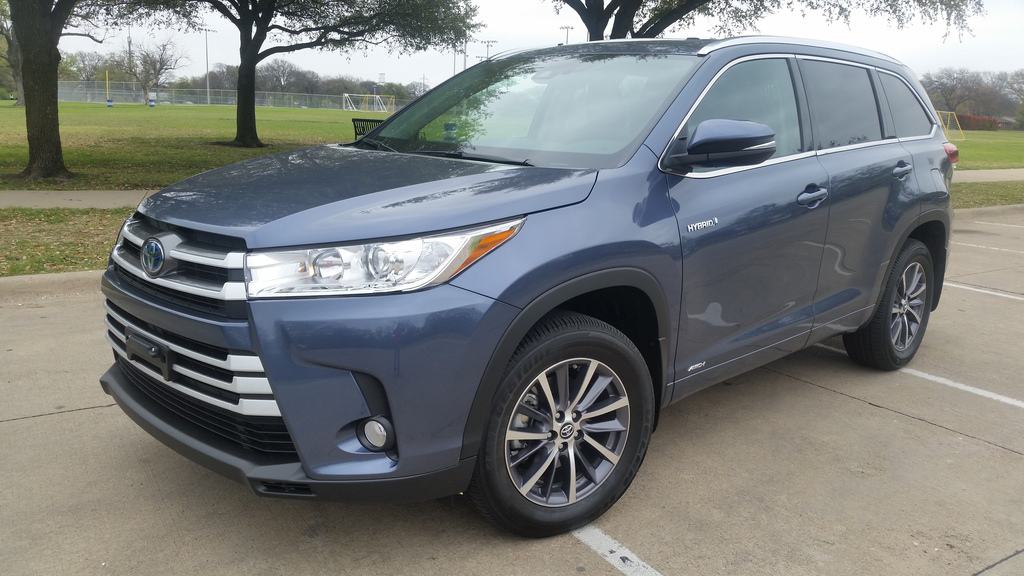 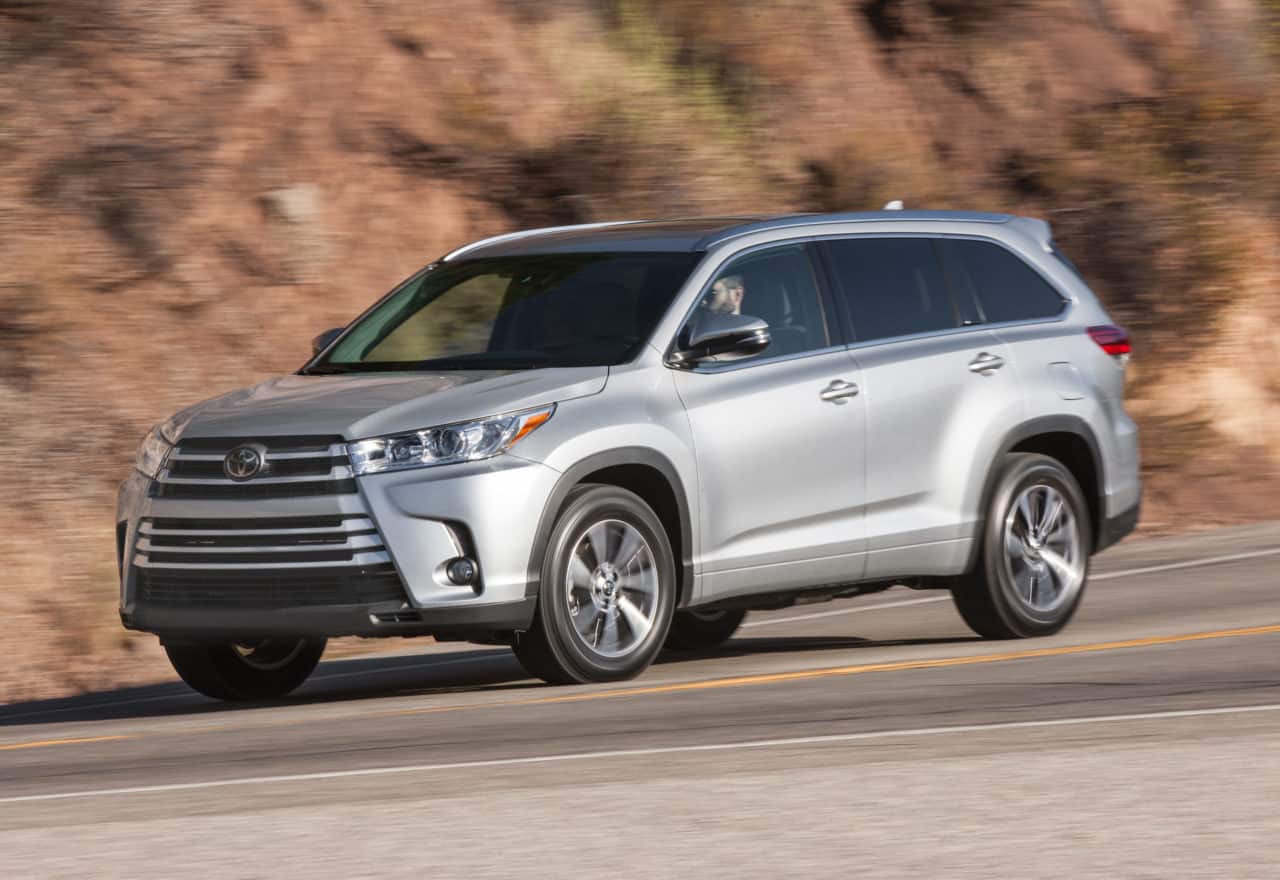 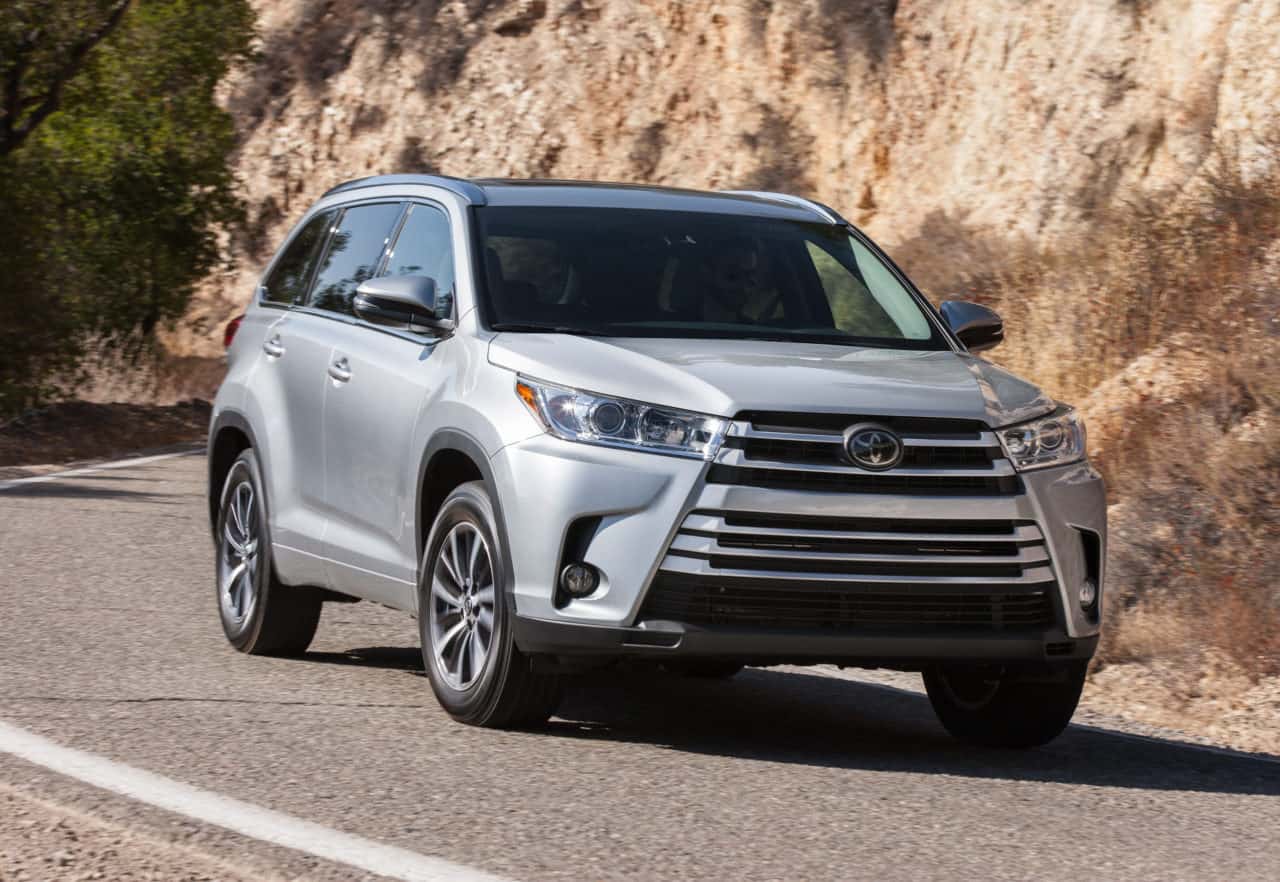 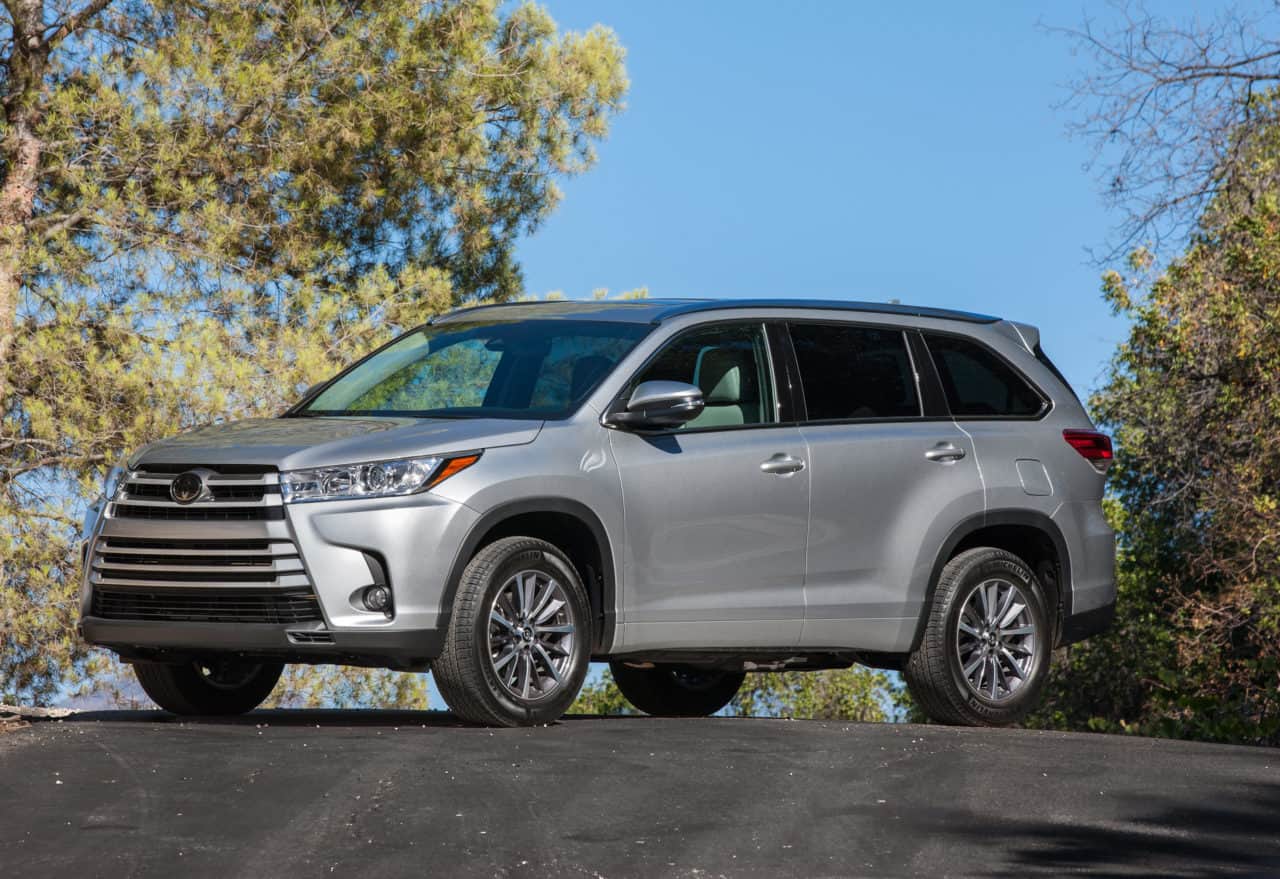 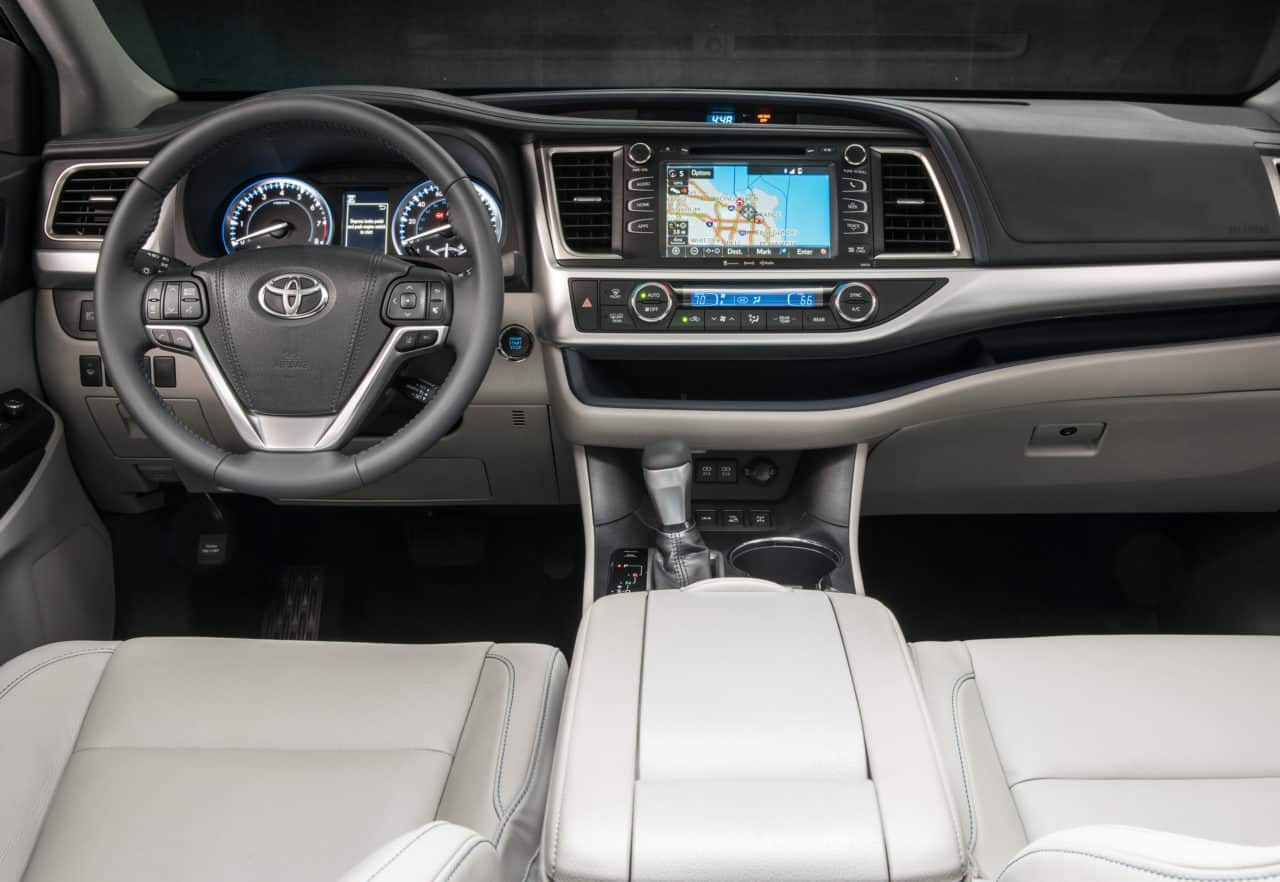 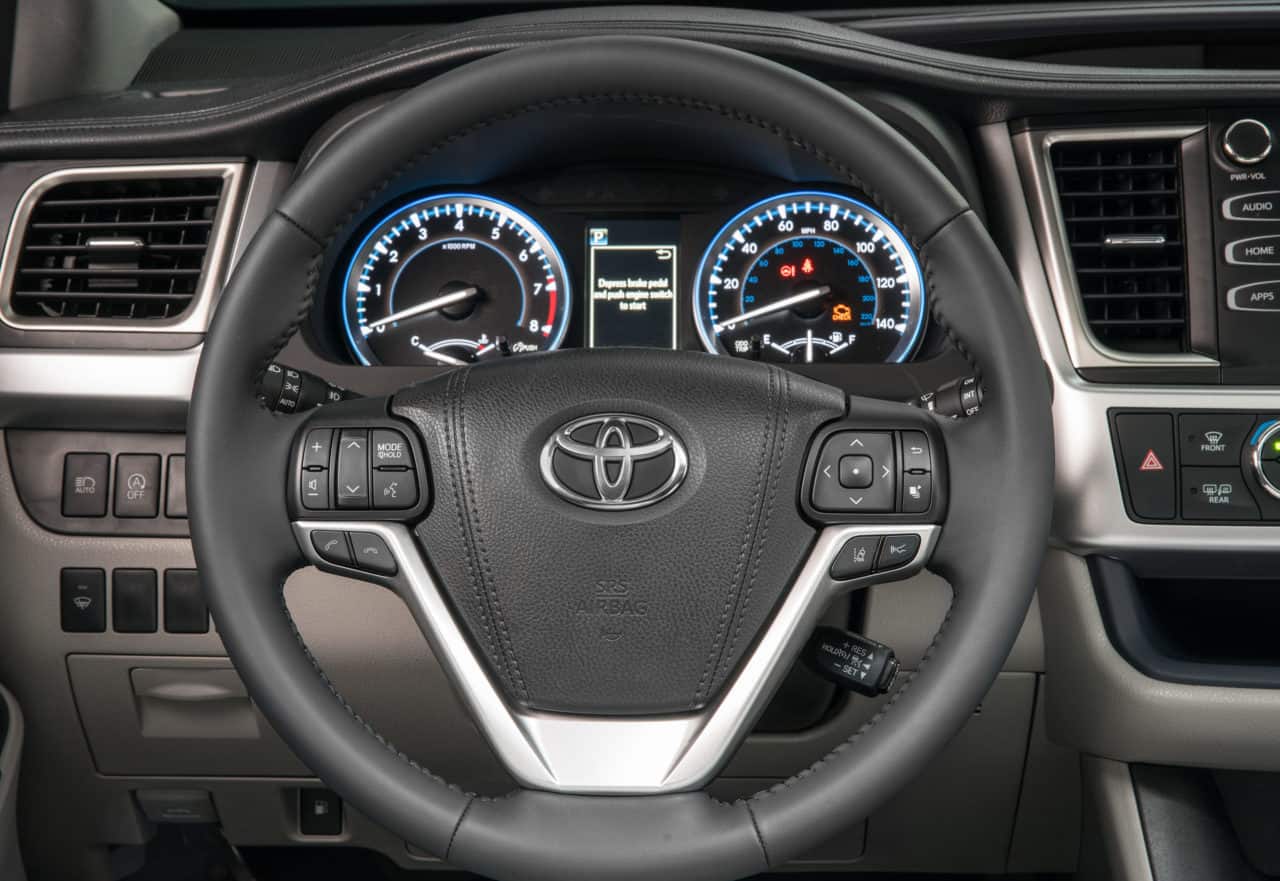 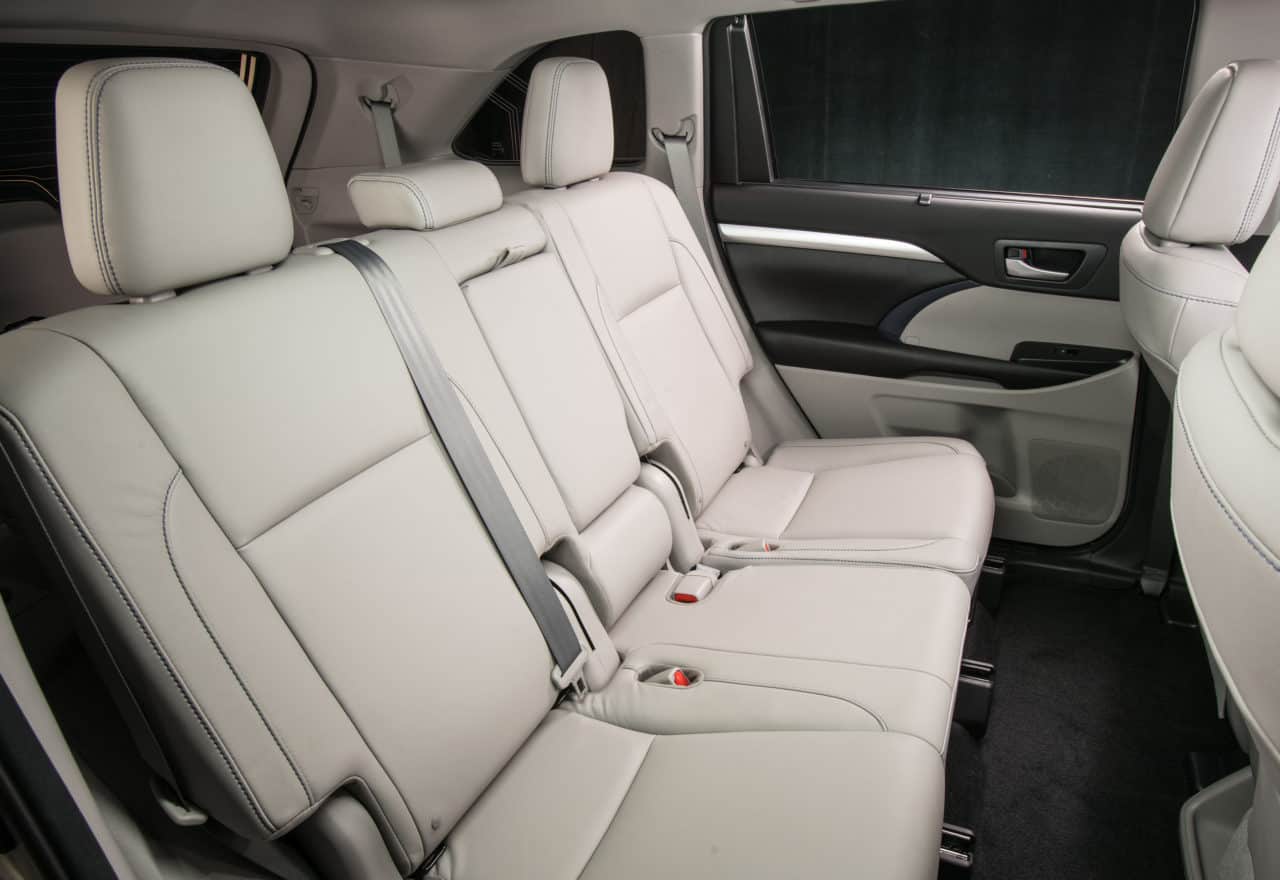 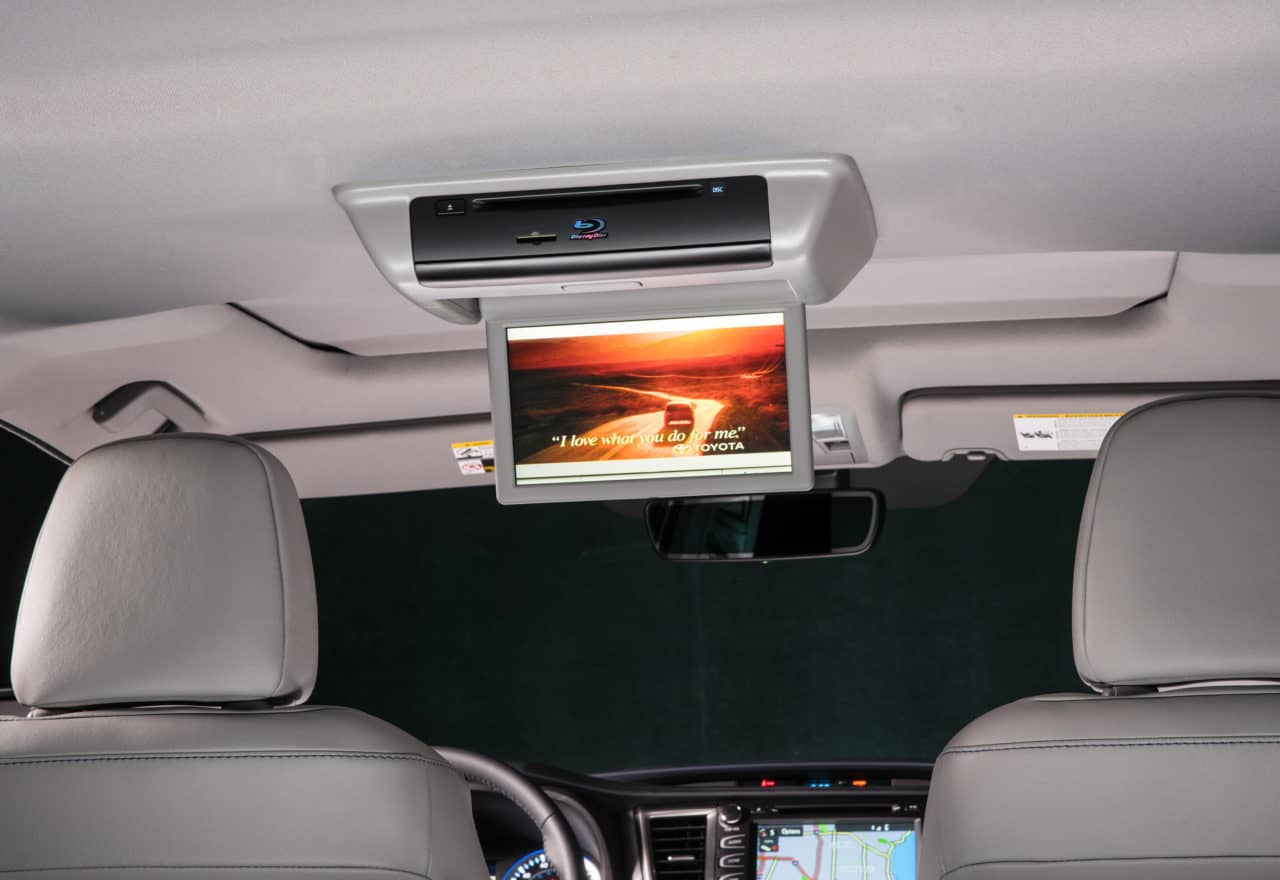