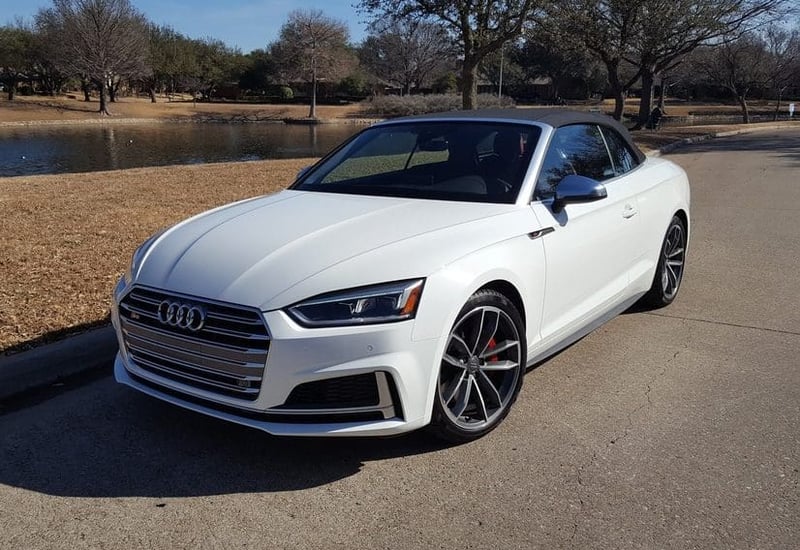 I mean, a folding top, like folding money, just gives you a rakish glow – and I’ll take any glow I can get these days not related to high blood pressure.

More important, convertibles can be great gusty fun to drive, immersing you in sun and stars rather than isolating you from them, as the safety nannies want.

(Relax, kids. You can dust off the urban grit and wash down the particulate matter when you reach your destination.)

Still, I really wasn’t sure what sort of returns to expect from the white 2018 Audi S5 Cabriolet I had recently, a two-ton study in subtlety and organic flow.

Let’s be honest, here: My smooth new S5 didn’t look much different from similar models 10 years ago, which sort of mutes the wow factor.

It shouldn’t, though. Angular, exaggerated styling – like, say, the new Lexus RX 350 or the Nissan Maxima or the Toyota C-HR crossover – just might finally be running out of lines.

While the Audi may seem familiar, its slippery rounded styling still looks pretty good to my geometrically blurred eyes – even without any big buzz.

The S5’s large seven-bar grille, for example, flowed gracefully with the curve of the front end, looking quietly bold – a statement, not a shout.

At least no one will mistake it for a screen door.

At first glance, the sides looked mostly smooth and a bit average, but stand back and check out the distinct new character line above the door-handle and at the top of the fenders, accentuating the slight curve in the body.

In back, slender taillamps wrapped around the trunk, contrasting with the beefy black twin-outlet duals bristling from beneath the bumper.

On cold or rainy days, I made certain that a taut black top covered the S5’s red interior, able to disappear cleanly into the trunk in about 15 seconds.

Moreover, everything settled tightly on 19-inch gray-and-alloy wheels wrapped with 255/35 tires – the only other clues that this topless Teuton might have serious intentions.

As you probably know, the “S” in the badge stands for sport and lurking beneath the convertible’s hood was a turbocharged 3-liter V-6 cranking out 354 horsepower and tied to a quick-shifting 8-speed automatic.

Although a little soft down low – turbo-lag, most likely – the salty V-6 awakened at about 1,500 rpm, delivering a strong surge in a muted baritone to 6,000 rpm.

As you might expect from a $71,000 German car, it had some decent moves on the old concrete dance-floor.

While a little too heavy to be truly agile, the Audi turned decisively into corners with a touch of body-lean, relying on its all-wheel-drive Quattro system for confidence-inspiring grip.

Likewise, the car’s quick, light steering bulked up at speed, giving it some high-performance heft. However, the steering remained as aloof as a computer-dating site, providing little in the way of road-feel.

Even in “dynamic” mode, though, the S5’s ride seemed long-legged and firmly compliant rather than German flinty. (I wish I could say that about my computer dates, by the way.)

Fortunately, the car’s grand tourer feel extended into its cabin as well.

When you’ve got lipstick-red interior and the top is down, those things seem pretty irrelevant.

A smooth black upper dash got it started with an instrument panel sporting Audi’s new digital gauges – a 2-inch diameter tachometer on the left and same-size speedometer on the right.

Between the gauges, which left me a bit cold, a display panel provided the car’s fuel economy, average speed, oil temperature and turbo boost among other data.

A 7-inch tablet-shaped display screen in the center of the dash broadcast everything else, with carbon fiber-like trim spicing up the mid-dash.

They meshed well with red-leather seats that offered good bolsters and a diamond-shaped pattern in their centers.

Just don’t put anyone you’re trying to impress in the back seat. Though head-room was acceptable, leg-room was quite tight – especially with my new-found height.

Like the exterior, the interior lacked big flash, but it still radiated luxury.

Granted, some folks contend that slightly reserved Audi needs a hot new look, but for those of us way tired of over-styling, the S5 looked like a cool lesson in less is more. 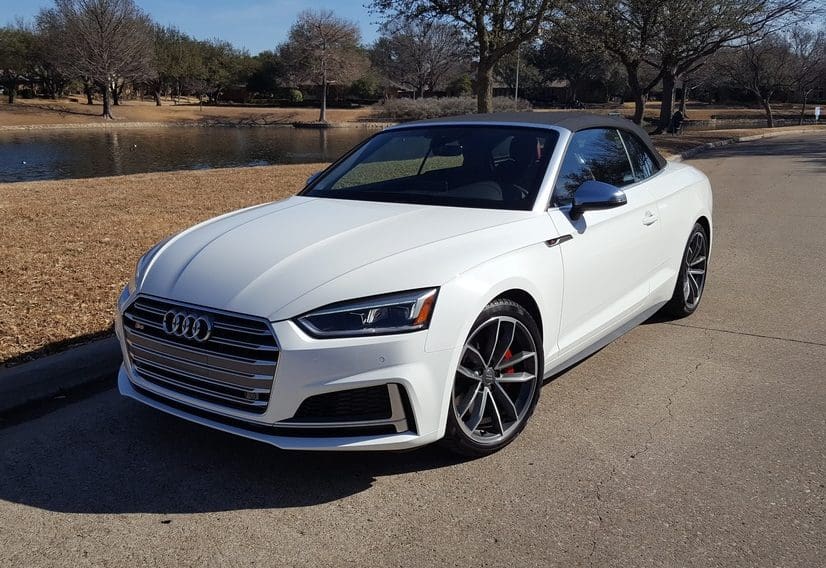 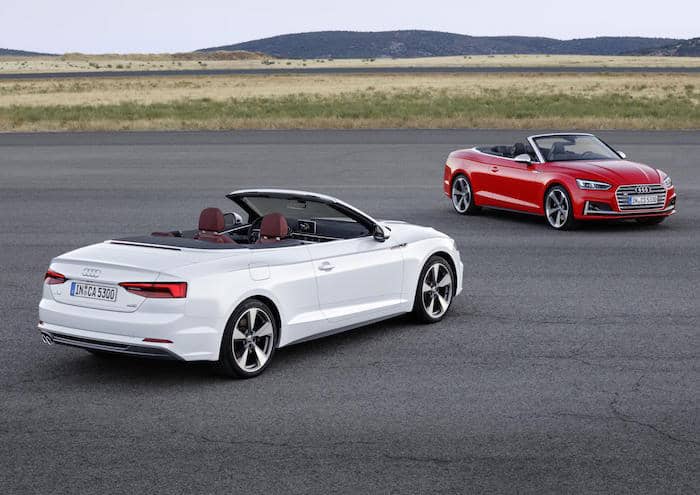 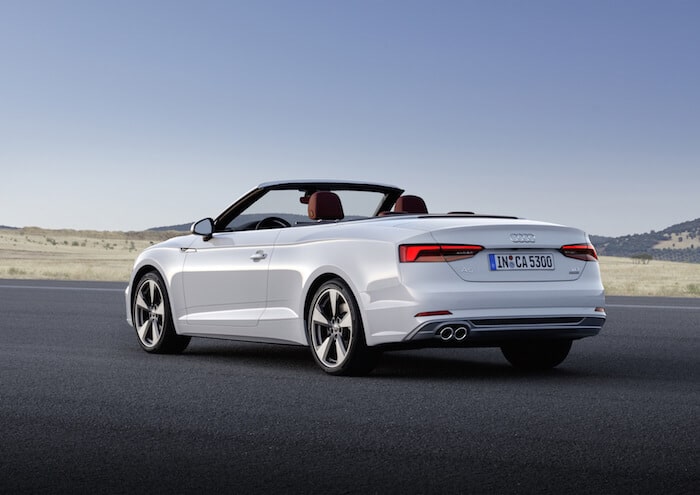 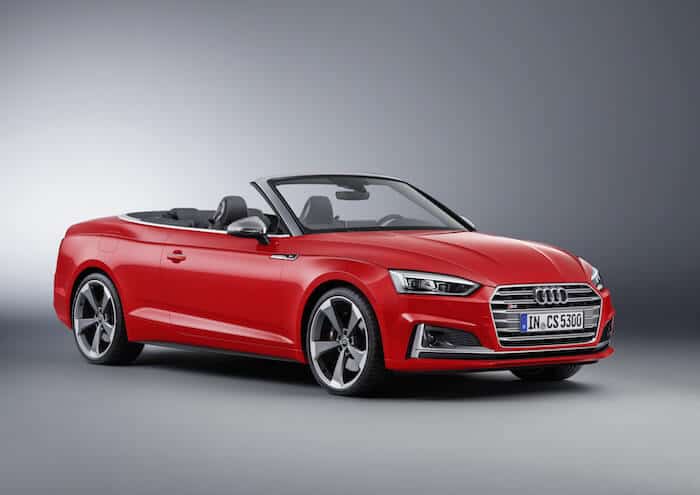 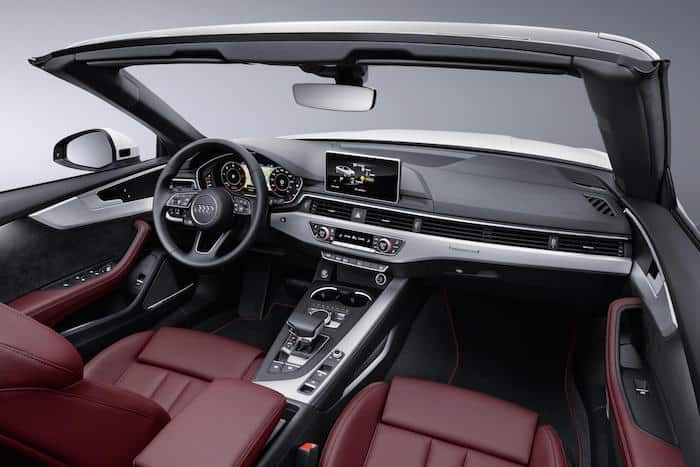 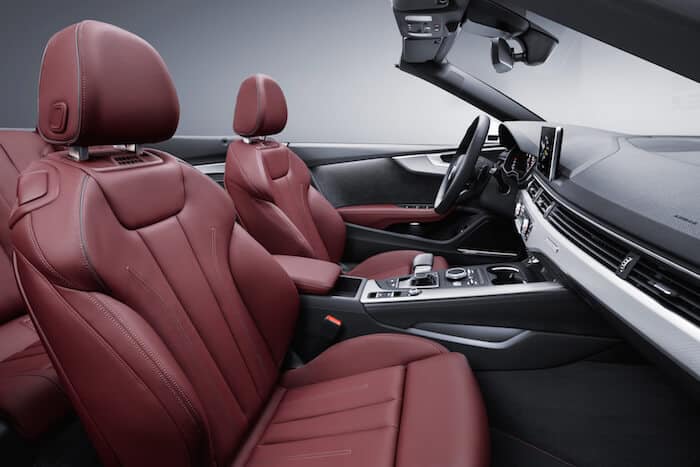 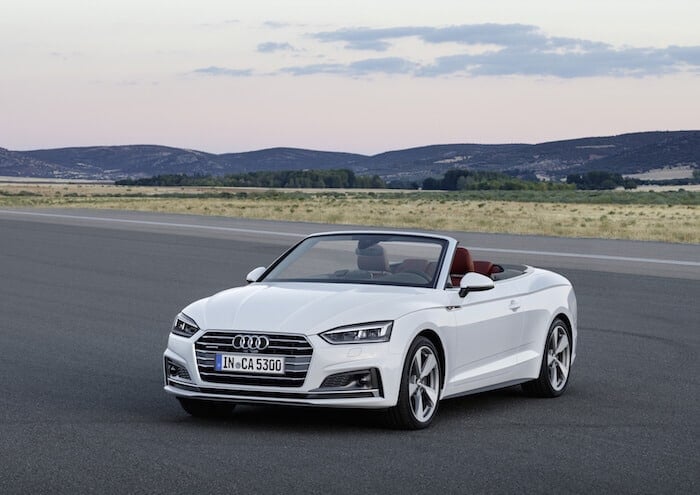 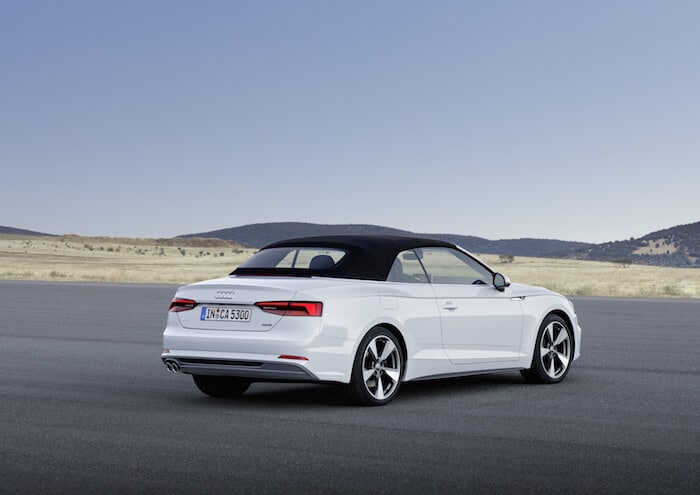