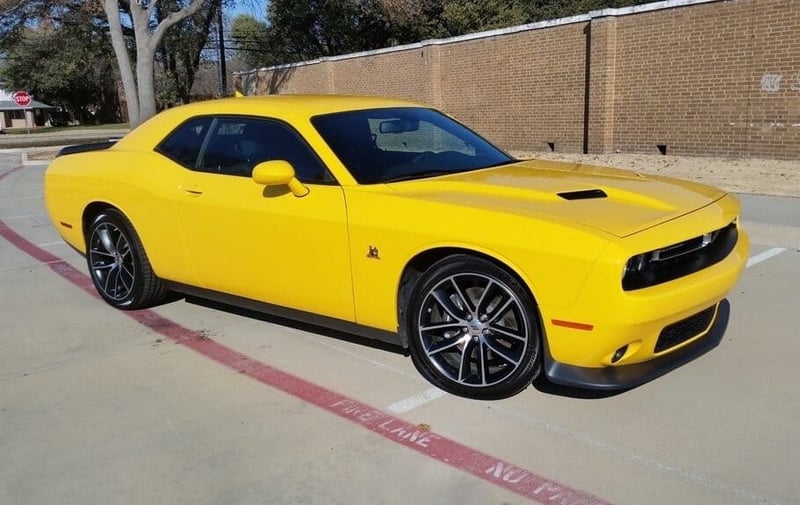 If we can’t get rain, give me some thunder in a big yellow can, please.  The window-rattling storm from an angry 485-horsepower Hemi V-8 should quench my thirst just fine.

OK, so maybe the electric-yellow 2018 Dodge Challenger R/T Scat Pack I had recently can’t really generate rain – despite the way it shakes and churns the atmosphere, but I can darn sure put the dreary winter drought far behind me, in a hurry.

As you probably know, the new/old Challenger – the most resolutely retro muscle-car on the market – remains a great vehicle for fleeing the chaos of modern times.  I’m pretty sure its stereo can’t even be tuned to NPR or CNN.

Styled to strongly resemble a 1970 Challenger, my Scat Pack car peered indifferently at the world from round headlamps separated by a shallow, broad grille.

Wide and thick, the Challenger felt more old-school than a double-breasted suit with a Nixon lapel pin.

All the gruff-sounding coupe needed was Captain Beefheart tumbling from overworked speakers.

A long, broad hood, for example, looked as if it might be covering a nuclear reactor – and it sort of was – while a cavernous trunk could easily swallow three or four golf-bags, a shotgun or two and several cases of beer.

Isn’t that what my friends in south Arkansas used to call a redneck vacation in a box?

In back, horizontal taillamps filled most of the Challenger’s prodigious 76-inch width, giving the rear its own sort of ‘70s glare.

With all those new/old lines, the Challenger could easily have ended up the Big Cheesy, but when a 6.4-liter Hemi V-8 quakes and shakes beneath the hood, everyone takes you seriously – even in a shade of yellow so bright it can be seen from Russian space stations on a cloudy day.

Granted, the Hemi does not technically breathe deeply through hemispherical combustion chambers – as old-school Hemis did. You won’t care, though.

It idles at a lumpy 800 rpm, loudly advertising its 485 horsepower – a pack of pumped-up ponies spread over a range from right off idle to 6,000 rpm.

Aided by 475 lb.-ft. of torque, the Hemi will spin the Challenger’s meaty rear tires with even half-throttle provocation.

Stand on it hard and the hefty coupe bellows and rips its way to 60-mph in 4.2 seconds, according to Car and Driver, considerably faster than those skinny-tired Challengers of yore.

Moreover, the seriously stout engine is tied to a modern 8-speed automatic that snapped off rapid shifts, keeping the big Hemi at a hard simmer.

It didn’t do a lot for fuel economy, though. The Scat Pack was rated at 15 miles per gallon in town and 25 on the highway. I typically averaged about 14.

If the new Challenger only had a great engine and nothing more, I’d still maintain it was better than the old loosey-goosey model.

The Hemi is just the meat in this sandwich. Unlike old Challengers, the Scat Pack car stopped, steered and handled pretty well – in spite of its porky 4,300 pounds of weight.

Though the steering felt too thick and heavy, it was quick, cranking the overweight Challenger aggressively into corners with surprising agility.

Even at, uh, slightly illegal cornering speeds, the car’s stiff suspension kept the body flat and parallel to the road.

Here’s the downside, though, and you probably could have guessed it: The Challenger rode like a half-empty cement truck, bobbing and stumbling over old suburban streets.

I didn’t care. Its wheels remained firmly planted on the road and the suspension didn’t provoke a single rattle.

Remember that when you’re driving.

It might distract you from the Challenger’s spare, hard-plastic black interior, which struggled to measure up to the car’s $43,000 window-sticker.

I guess most of the money got spent on the engine, transmission and suspension – and I’m OK with that.

I never took much pleasure gazing over the Challenger’s swoopy, granular dashboard made even more outdated-looking by a large center stack protruding from the dash.

Still, everything functioned fine. Knobs and buttons controlled the audio and climate systems, while a nifty T-bar shifter worked vastly better than those high-dollar electric units in luxury cars.

Although the seats certainly fit the minimalist motif – they appeared to be cloth with patterned centers – the front buckets sported supportive bolsters and kept my spine in line, while the rears offered a bit of space.

Incidentally, the options on the Scat Pack car included the stereo system ($895); the 8-speed automatic and bigger tires ($1,500); and the 8.4-inch display screen with Chrysler’s UConnect system and navigation ($795).

It all felt like a pretty good bargain to me – ferociously modern muscle-car performance, surprisingly good handling and looks that shout rapid transport back to 1970.

Turn up The Who. 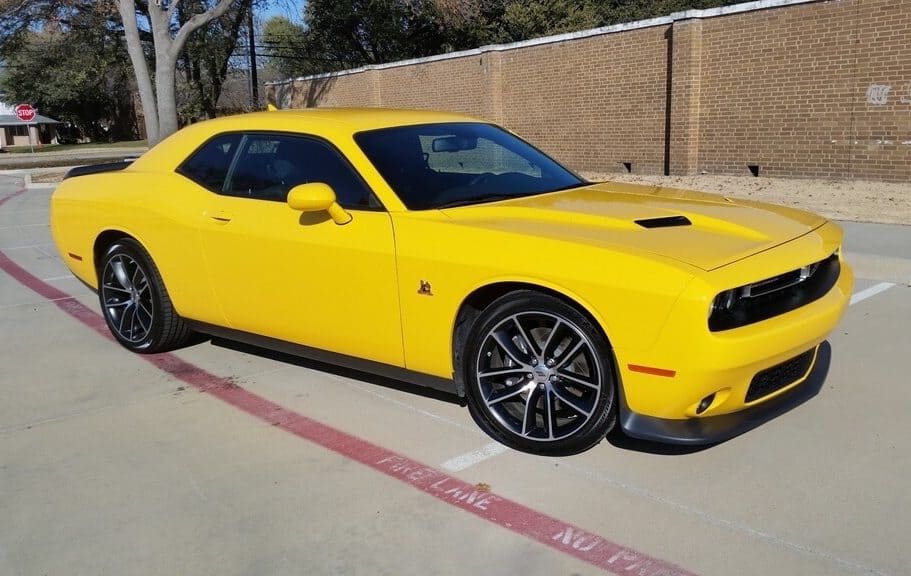 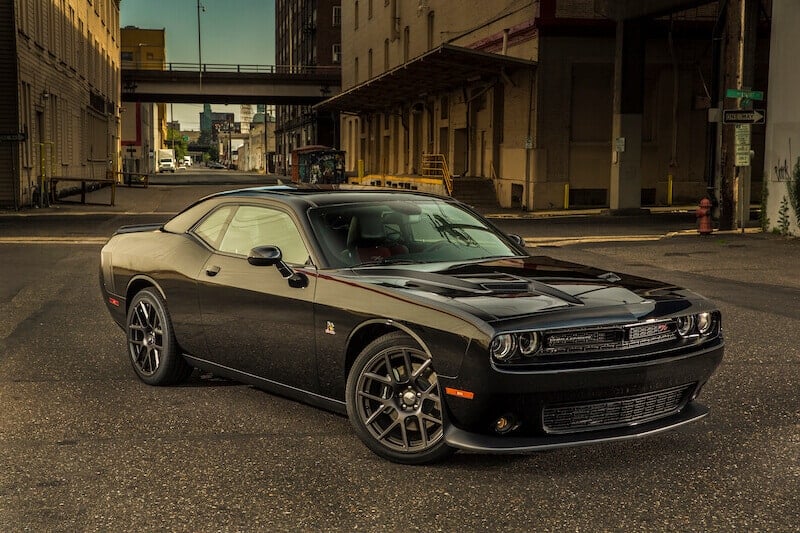 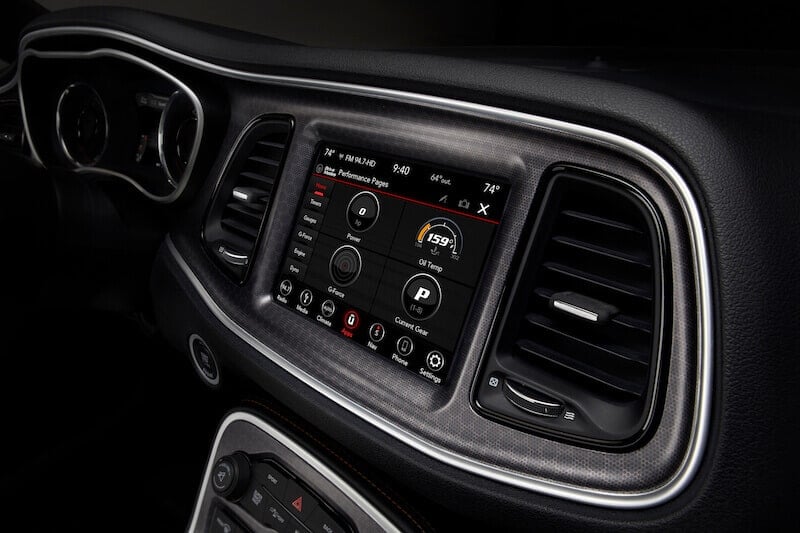 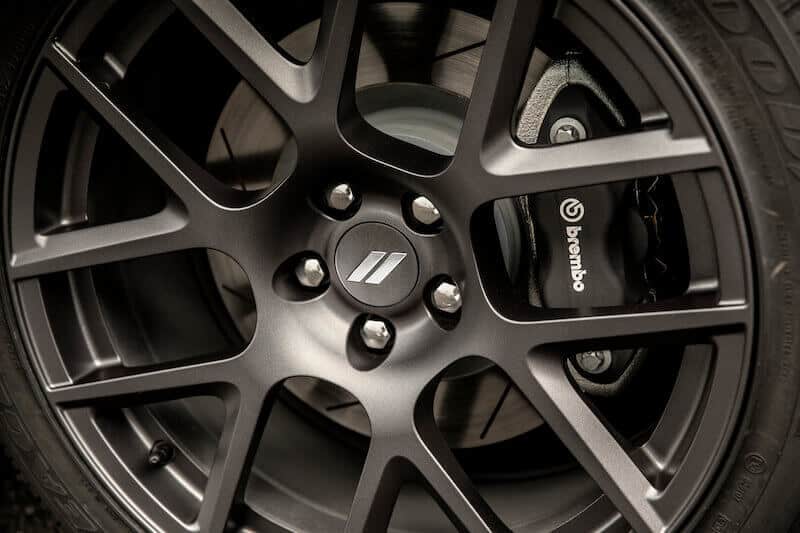