2018 Hyundai Kona Stands Out In The Subcompact Crossover Crowd 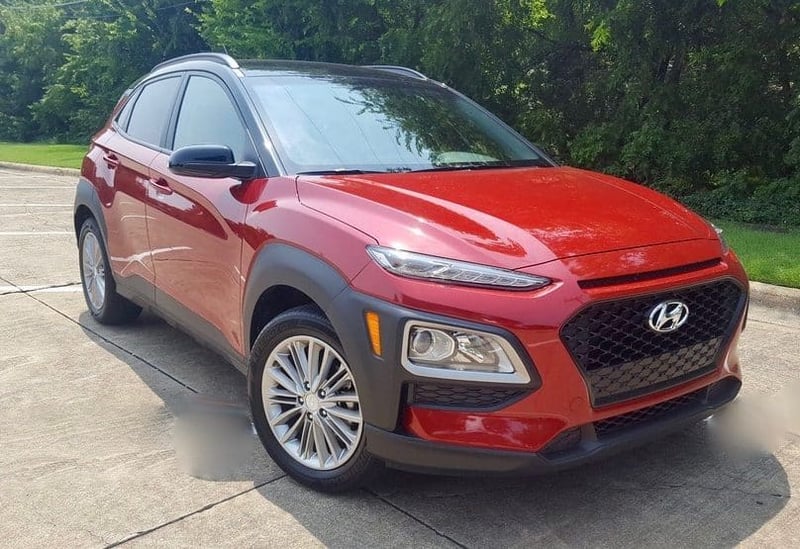 Most cutesy subcompact crossovers look like they just backed out of a gingerbread garage somewhere, their hatches filled with sunshine and butterflies.

Oh, boy. Break out the kazoos.

Grumpy old guys like me really struggle to take them seriously. I mean, should you always wear clothing with polka dots on it when you drive one?

Give me something usefully odd and edgy, a vehicle likely to have a black-leather motorcycle-jacket lying crumpled in the floorboard.

Although a slightly late arrival to the crossover mosh-pit party, the Kona rolls in with flair and personality, which beat the heck out of polka dots any day.

That should help sales-hungry Hyundai. The ambitious automaker got caught way short of crossovers and SUVs when the U.S. market began shifting away from sedans to trucklets and boxes.

Fortunately, though, the Kona doesn’t look or feel rushed into production.

The red SEL model I had recently announced its refreshing non-conformity right up front, wearing strange horizontal lights up high that wrapped into the front fenders, with second much-larger lamps down low.

Maybe the lower units were landing lights or something. I’m not sure, but they always fired my imagination, and get this, kids: The Kona’s large, but tidy blacked-out grille was smaller than a picnic table – breaking with tired crossover trends – and spiced up by a nifty little slot at the leading edge of the hood.

No one will mistake it for a RAV4 or a CR-V.

Meanwhile, a substantial, slightly chiseled hood rolled down to graceful shoulders over the front wheels, while black cladding wrapped around the lower lights and fender wells.

Moreover, a sleek black top and 17-inch turbine-style wheels shod with 215/55 tires gave the Kona a bit of continental flair – in a vehicle that costs $22,000.

It all pretty much screamed “skinny-leg jeans.”

Sadly, though, my Kona’s meek 2-liter four-cylinder engine never even shouted – no matter how much I abused the accelerator-pedal.

With just 147-horsepower and a six-speed automatic to move 3,100 pounds, the Kona definitely preferred strolling to running.

Initially, it jumped energetically away from stops, hinting at the possibility of lively performance, but like a computer-date who’s all hat and no flash, the eye-catching Kona flattened out quickly, needing 9.2 sluggish seconds to reach 60 mph, according to Car and Driver. (A much quicker 1.6-liter turbo four with 175 horsepower is also available in the Kona.)

At least the 2-liter motor is pretty economical, getting 27 miles per gallon in the big city.

Actually, though, the Kona mostly acquits itself with its solid platform and lively handling. I also gave it points for having a real automatic transmission and not a cursed CVT like most subcompact crossovers.

Thanks partly to a relatively low 61-inch height, the front-wheel-drive Kona could fling itself into corners with good composure, clinging pretty well to the road.

As a result, it could dart through Dallas’ dense and often distracted traffic with the sort of smooth moves that college and pro football teams pay big money for.

The ride, however, could get fidgety and clompy on city streets, finally smoothing out with speed on highways and expressways.

Still, the Kona never bored me – and I’ll take that over cushy comfort any day.

As you might expect with a vehicle costing $22,000, luxury touches in the interior aren’t easy to find.

The black interior in mine, for example – while heavily plastic — flashed some spark.

The dashboard sloped down, rolling around a 7-inch display screen that looked a little to me like a cheap knock-off of an iPad.

Nifty textured, flat-tone plastic covered the mid-dash, with amusing rounded vents for the climate system, as well as real dials and knobs to control it.

While the door panels were mostly plastic, they got a little slab of the textured material on top, and checked centers brought more spice to the black cloth seats.

Keep in mind, of course, that the Kona is a fairly dinky subcompact crossover, so leg-room in back can be a bit tight.

If it had arrived with the more powerful turbo-four, I would probably declare it Konan the Outlier, the most interesting mainstream subcompact crossover I’ve driven lately.

Even with the weaker engine, though, I never felt like I was stuck in my college daughter’s cute-ute, and that’s pretty high praise from a committed car guy. 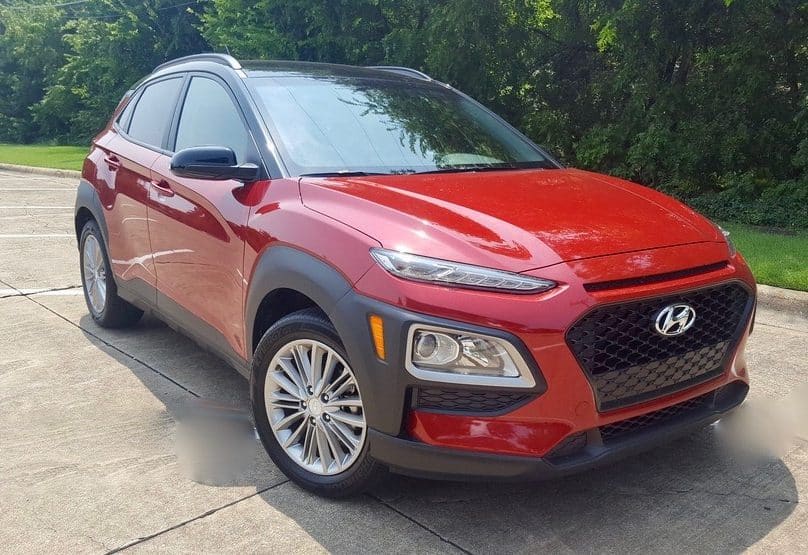 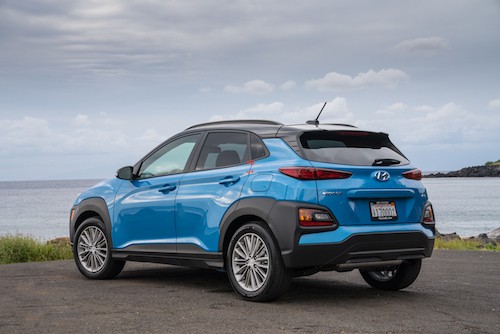 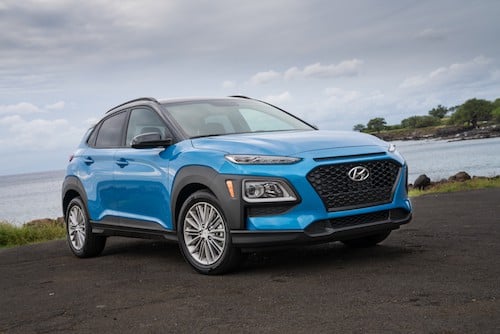 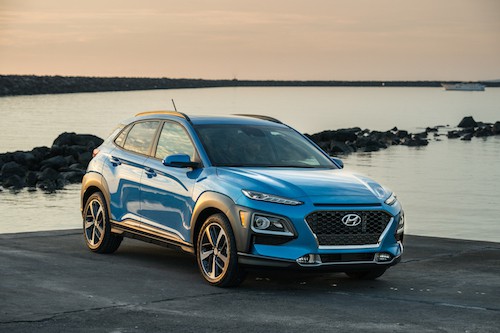 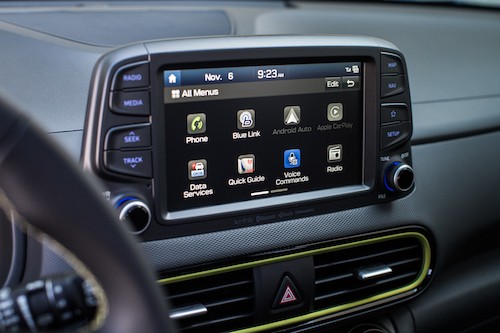 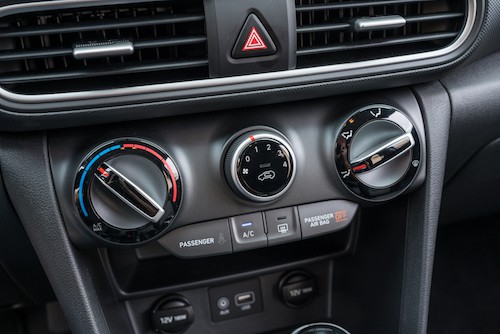 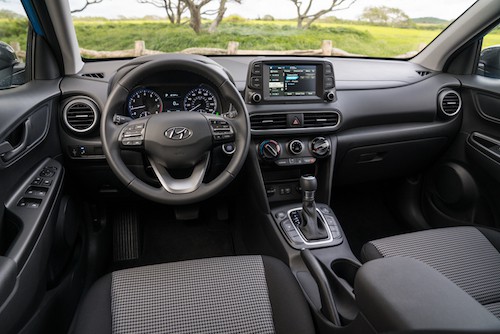 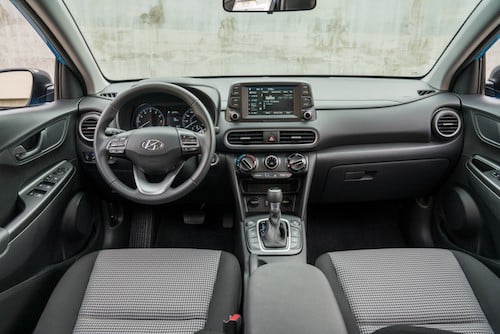 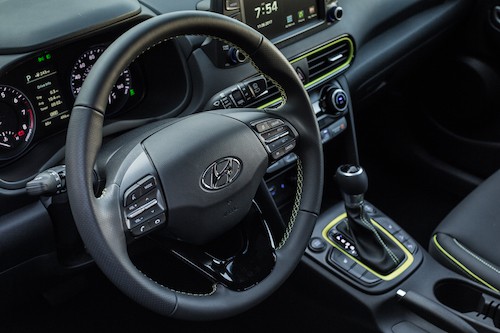 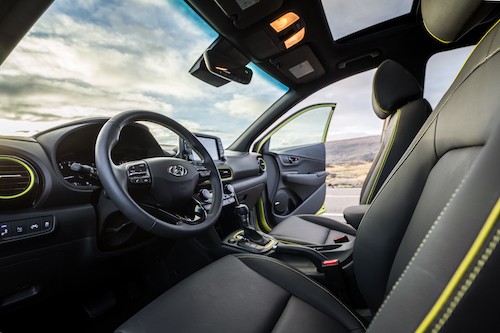 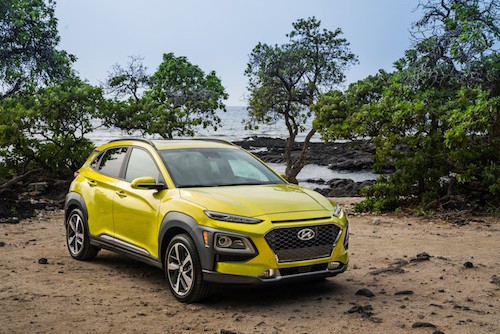 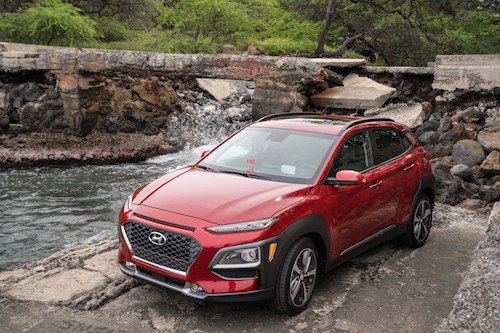 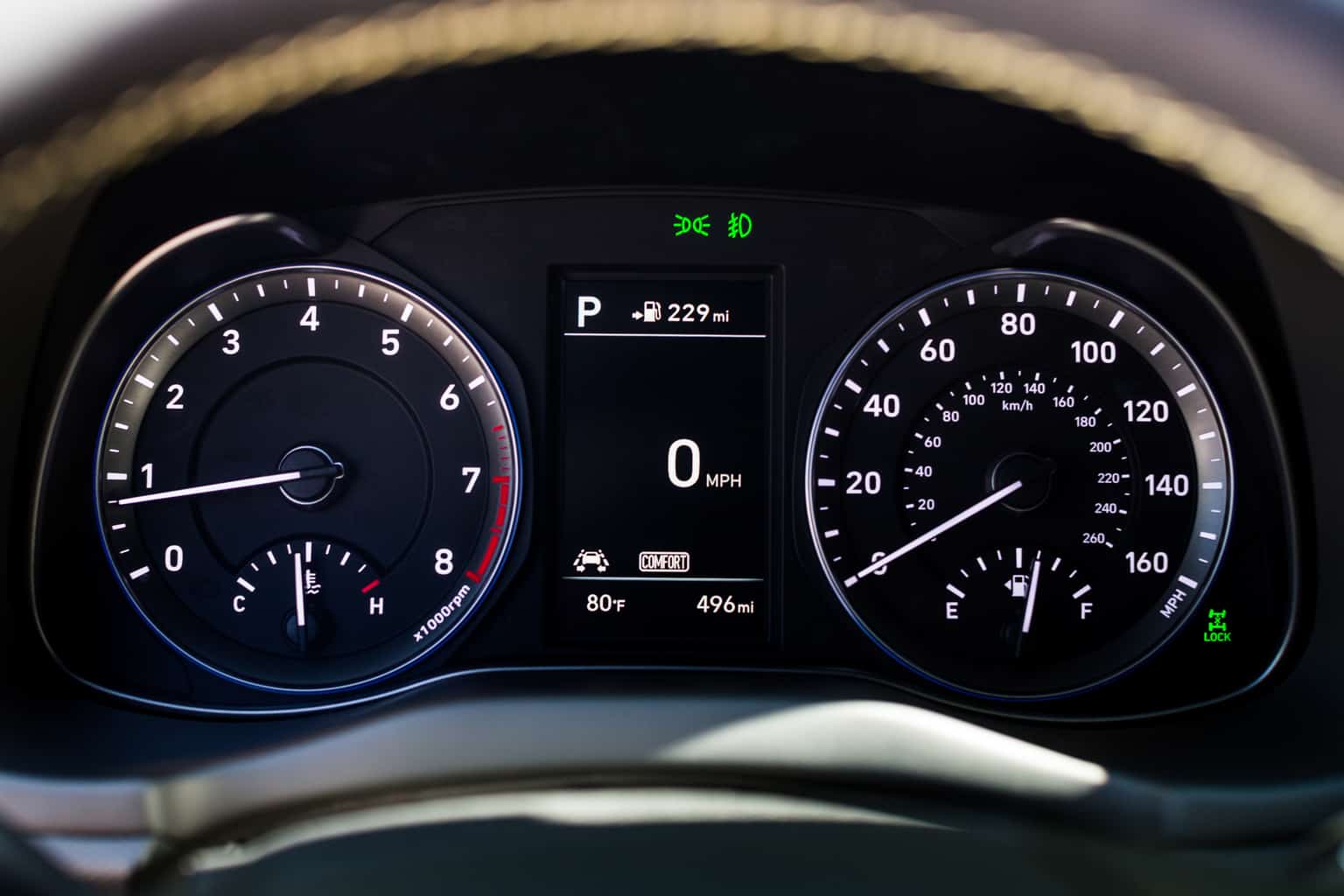 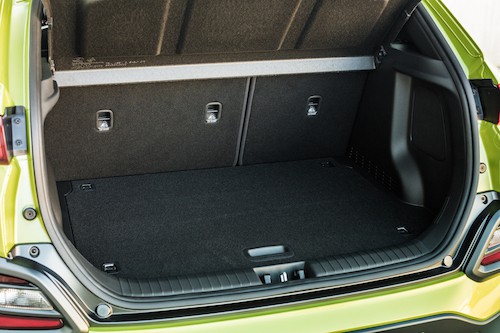 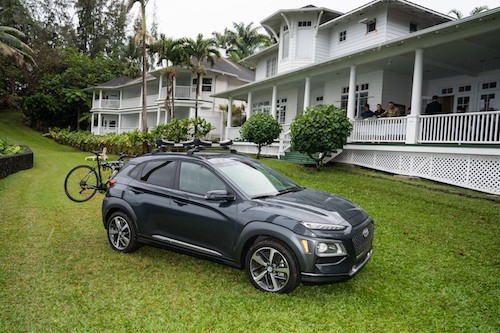