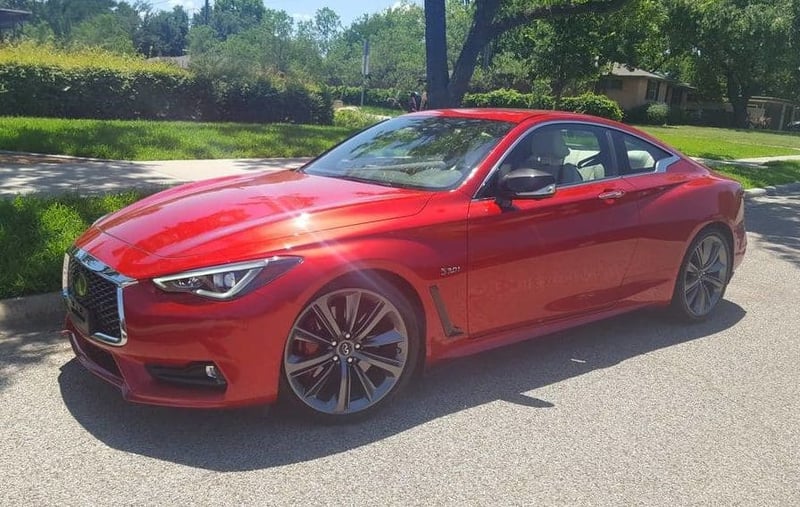 The sleekly sinister Infiniti Q60 coupe – a taut mix of metal, leather and muscle -- looked to me like a one-way ticket to Hollywood, fast.

I mean, what’s not to like about low and chiseled with sweet, subtle curves and 400 horsepower? It even sports a sort of pouty grille.

So when the all-new Q60 arrived at dealers last year, it seemed bound with a throaty snarl for the bright lights and big time, finally giving struggling Infiniti a star car.

Well, uh, we’re both still waiting for our call, Hollywood – and our wallets are getting a bit thin.

They don’t know what they’re missing, particularly with the 2018 Q60 Red Sport 400 I had recently.

As you may recall, the Q60 replaces the Infiniti G35 coupe, a pleasant, rear-wheel-drive coupe that kind of resembled a bar of soap.

No one will see that in the more chiseled and aggressive Q60, which had the misfortune to arrive on the market as sales began veering sharply to trucks, crossovers, and SUVs. (Its sales were down nearly 21 percent through June.)

Built on a platform that evolved from the old G35, the Q60 remains similar in size to the old coupe – but packing a lot more sizzle.

A long sloping hood, for example, topped muscular front fenders, while a ridge-like character line sliced through the door-handles.

In back, exhaust pipes the size of small cannons bristled from a black tray at the base of the rear end, complementing a carbon-fiber lip-spoiler.

Like all great sports coupes, the Q60 also flashed a fine, sharply curved top and a great stance, with the body clinging tightly to 20-inch multi-spoke gray wheels wrapped with 235/35 tires up front and 275/30s in back.

I felt like Fast Eddie just looking at it – with good reason.

The new turbocharged 3-liter V-6 beneath the coupe’s hood – from the same basic family of sixes that provides the Nissan GT-R with its Godzilla V-6 – generates 400 stout, mostly lag-free horsepower.

Bolted to a crisp seven-speed automatic, the engine effortlessly shoves driver and passenger into their seats with a wave of torque that starts boiling up at a low 1,600 rpm.

Throttle response was instantaneous, building with a hoarse baritone howl that matched the serious punch.

Even with the traction-control on, the engine could spin the tires briefly with casual stabs of the throttle, accelerating to 60 mph in a rapid 4.5 seconds, according to Car and Driver.

However, the edgy engine also can act like a grown-up, according to the feds, providing 20 miles per gallon in town and 27 on the highway.

Although my Q60 weighed a considerable 3,900 pounds – its smallish shape stuffed with content, computers, and amenities – it dove into corners hungrily, staying resolutely flat and composed.

Of course, the ride on city streets in sport-mode could be as fidgety and bouncy as a 16-year-old boy, calming down some on highways.

That didn’t irritate me near as much as the car’s vague, extremely quick steering – a product of Infiniti’s optional Direct Adaptive Steering (DAS) system, a drive-by-wire unit.

I’ve driven several Infinitis with this unit and I’ve never been able to find much to like about them.

My car’s white interior, though – despite an abundance of plastic – felt pretty soothing, reminding me at times of all the red-over-white cars in the Beach Boys ‘60s.

The Q60, of course, was a bit more modern, with a two-tier black-plastic dashboard that dropped down to a high, broad console forming a kind of cockpit up front.

Infiniti stuck display screens on each level of the dash – a navigation system up high and a second main screen with cursed touchpads to tune the audio system.

Back-seat space is not, with leg- and head-room in the rear so limited that I needed a couple of beers just to attempt to crawl into it – and then I couldn’t get out.

The Q60 earned its lofty list price with $11,000 in options, including a Sensory Package with heated seats and remote engine start ($2,250); a Pro Assist Package with blind-spot warning, backup collision intervention and front and rear sonar ($2,250); and a Proactive Package with intelligent cruise control, the DAS steering and lane-departure prevention ($2,850).

Whew. I’d be happy with a Q60 that had none of those boxes checked because the basic Red Sport 400 is plenty entertaining all by itself.

I just hope it survives these truckish times. 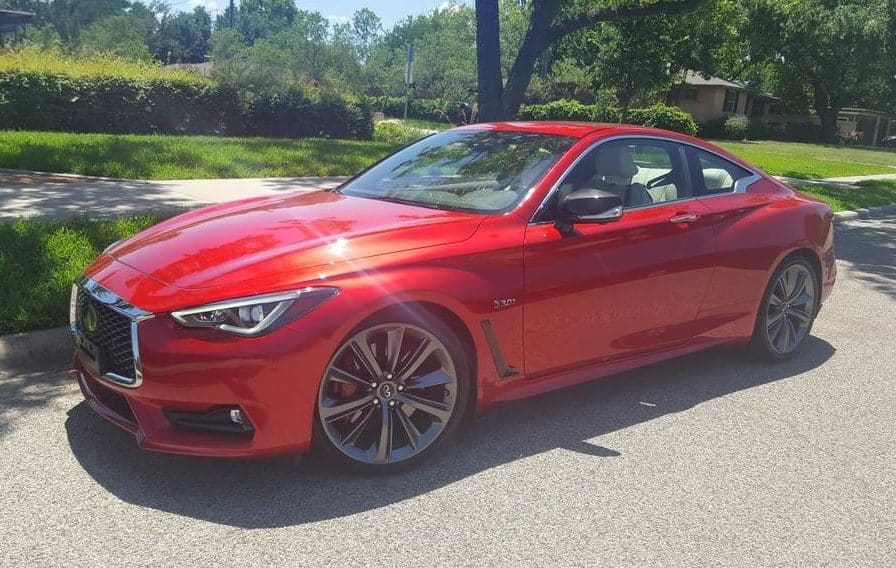 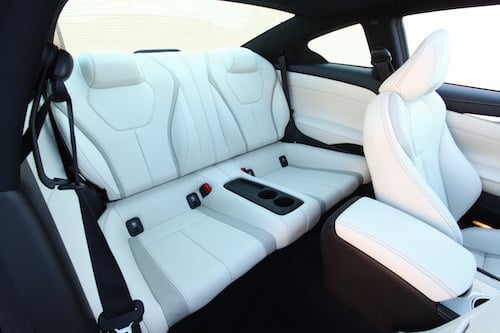 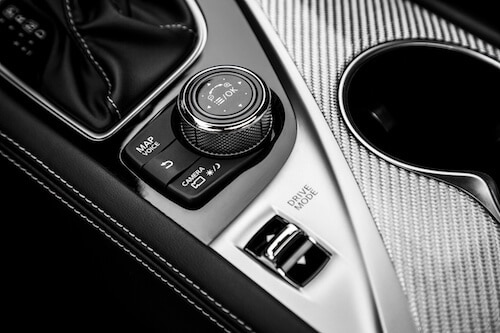 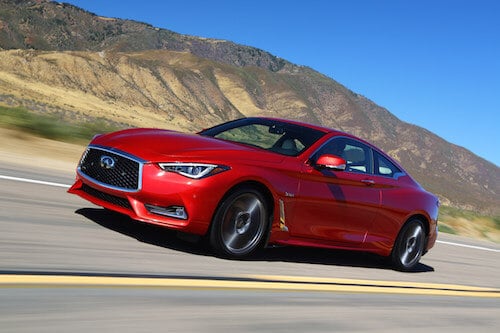 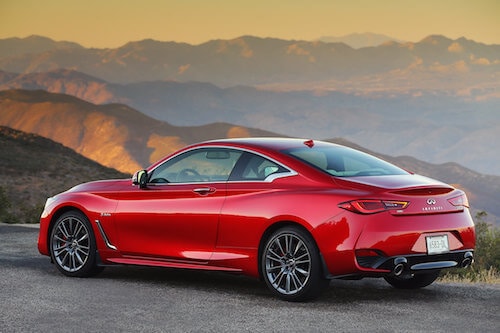 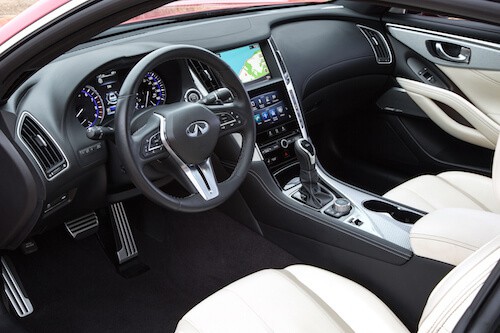 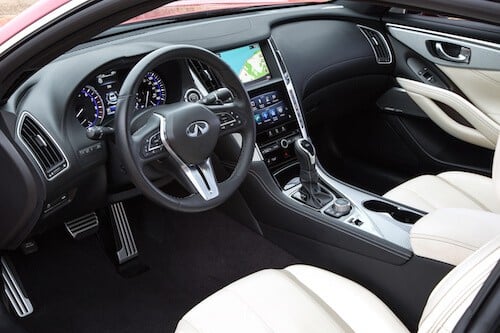 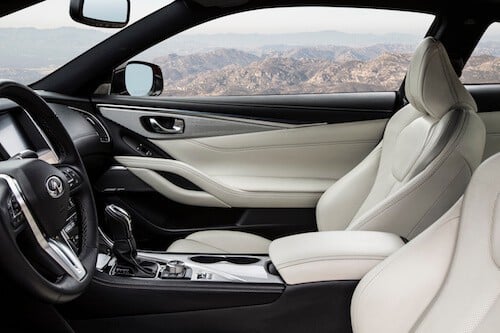