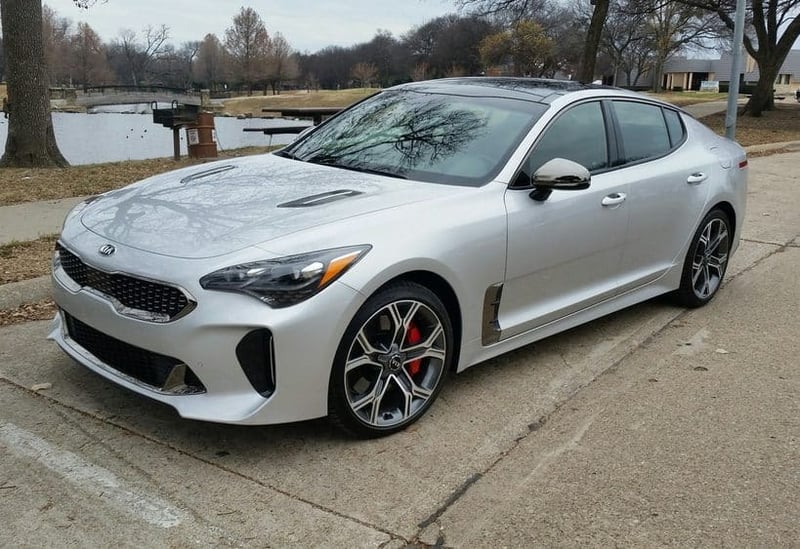 Low and lean, the slinky silver sedan in my driveway seemed about as German as a raucous beer-hall in Munich.

I halfway expected to find a wooden keg of Weissbier in the trunk and punk-accordion music on the stereo, both of which I would happily accept in return for the crisp, neck-stretching handling and hardboiled horsepower of a fine German sports sedan.

Here’s where it gets kind of strange, kids: The edgy, head-turning sedan in the drive was a, gasp, Kia – albeit one with a twin-turbo V-6, all-wheel-drive and serious sporting aspirations.

Did I just get drafted into the NBA as a slightly over the hill, five-and-a-half-foot tall guard?

That’s just the sort of stretch the 2018 Kia Stinger GT2 is – a slick $50,000 sedan designed by Peter Schreyer, formerly of Audi, and built on a platform shared with the near-luxury Genesis G70.

Just for added credibility, its engineering was handled by Albert Biermann, a one-time vice president of engineering in BMW’s M division.

I could see a dash of Jaguar, a sliver of BMW and a touch of Porsche Panamera in the car, blended well with other elements to form one taut, stylish sports sedan.

A long hood and fenders gave the car a stretched, sensuous feel – despite cheesy fake vents that marred the hood.

The Stinger’s smooth, subtly muscular sides, meanwhile, wore the sedan’s best piece of jewelry – U-shaped vents behind the front wheels with character lines slicing off them.

In case someone still doesn’t get the Stinger’s sport vibe, dual-tipped exhausts bristled from both sides of a black tray, joining bright-red Brembo brake calipers on the list of performance parts.

In addition, good-looking 19-inch honeycomb-style wheels wrapped with 225/40 tires in front and 255/35s in back filled the car’s tight wheel-openings.

Could this really be a Kia, I wondered, the company that 20 years ago gave us sedans so tinny and cheap they seemed disposable?

You’ll probably ponder that question, too, after you push the Stinger’s start button.

Its turbocharged 3.3-liter V-6 springs to life with a flat, mostly muted growl from 365-horsepower that felt underrated.

The Stinger is available in rear- and all-wheel-drive, as well as an entry-level turbocharged 2-liter four. Personally, I’d be hard-pressed to pass up the smooth, potent V-6 and besides, that’s what 401(K)s are for, right?

With no discernible turbo lag and instant response, the smooth six pressed everyone in the car into their seats with 376 lb.-ft. of torque – from an extremely low 1,300 rpm.

Though the Stinger is no lightweight at nearly 4,200 pounds, the stout 3.3-liter engine can push it to 60 in a fleet 4.6 seconds, according to Car and Driver, and is capable of 19 miles per gallon in the city.

Stay on it hard and the engine will pull hard past 6,000 rpm and always felt ready to play, aided most of the time by an 8-speed automatic. (Occasionally, the transmission seemed a bit slow to downshift, but then, so am I.)

The Stinger also felt surprisingly light on its feet given its weight and all-wheel-drive. It turned hard and quick into speedy corners with minimal body lean – if any – and commendable grip.

Although its steering felt slightly numb and thick, it was quick and precise.

The big sedan’s ride, meanwhile, tended to the firm side, but was not as sharp-edged and sport-extreme as many of the German sedans I love.

Fortunately – given my loaded Stinger’s eye-watering $52,300 window-sticker – the big sedan offered a red-and-black interior as appealing as the exterior.

Though a little light on pure luxury feel, it looked well-executed with a flat upper dashboard in black and a tablet-shaped 8-inch display screen in its center.

Like the upper dash, an unusual curved mid-dash was cast in pliable black plastic and dominated by three very Euro-looking round vents.

A thin horizontal panel beneath the vents contained knobs and buttons for audio and climate control – and not a hint of a tacky center-stack.

As always with new vehicles, the tidy dash hid all sorts of safety nannies, including forward collision avoidance, lane-departure warning, active cruise control and something called driver attention warning. Actually, my icy ex provided many of those for years, so I was pretty familiar with them.

More inviting to me were the Stinger’s dark-red seats with their supportive bolsters and perforated centers – not to mention good leg- and headroom in back.

Still, don’t ask me to guess where the Stinger will land. Is it the most-surprising mid-size, mainstream sedan in years or a real disruptor in the near-luxury segment?

I’m not sure, but the Stinger may be the best attempt I’ve seen in decades from an automaker reaching to crack a segment where it has never played. Maybe there is hope for my NBA career. 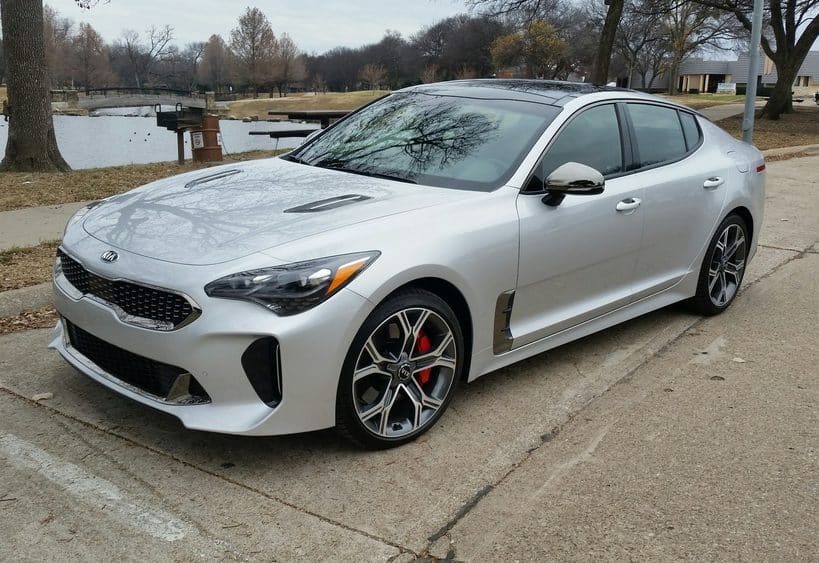 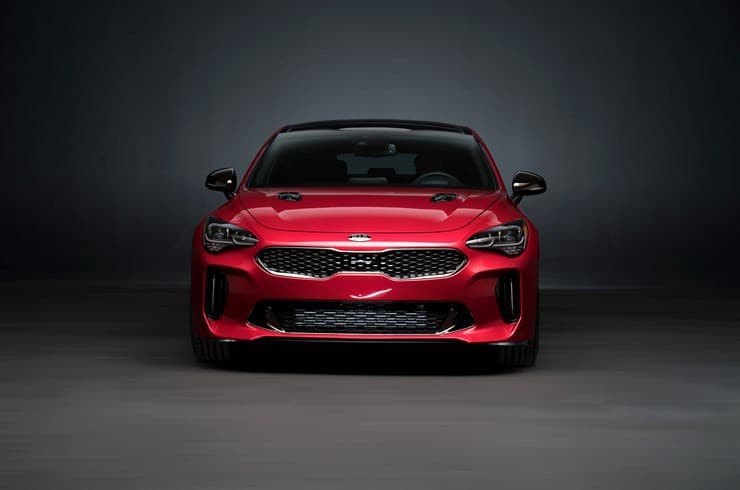 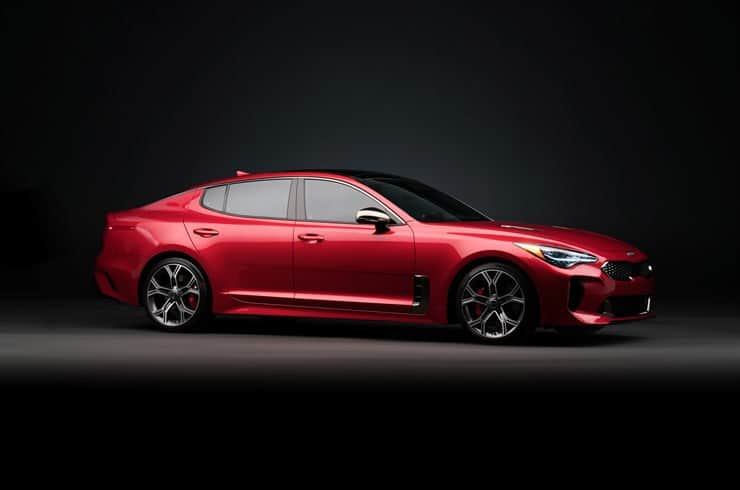 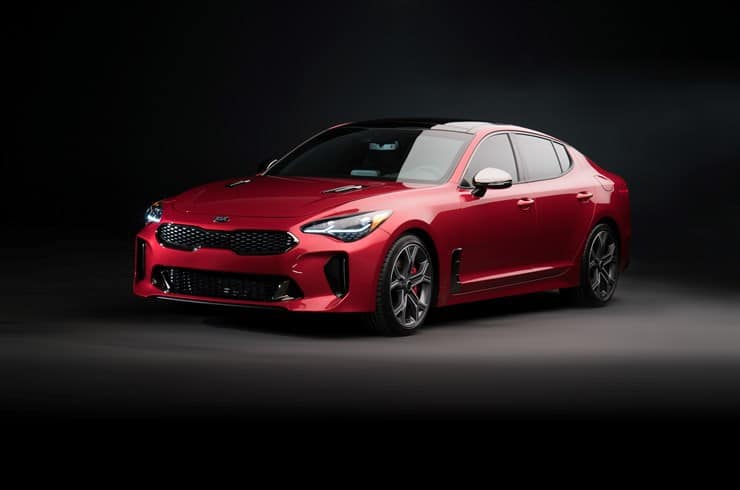 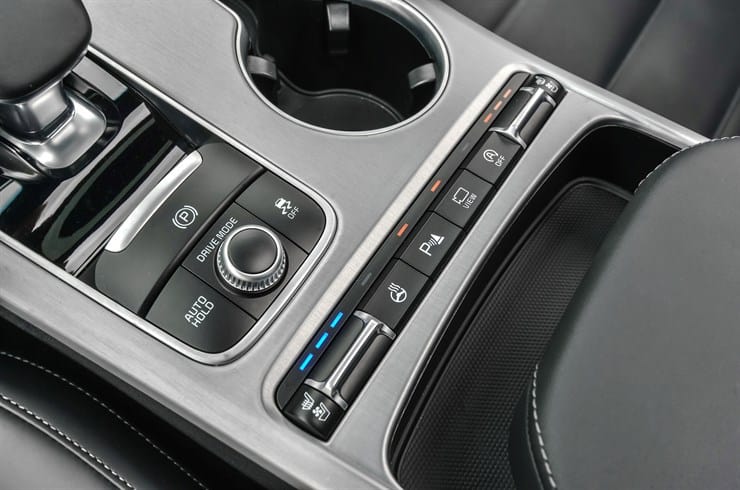 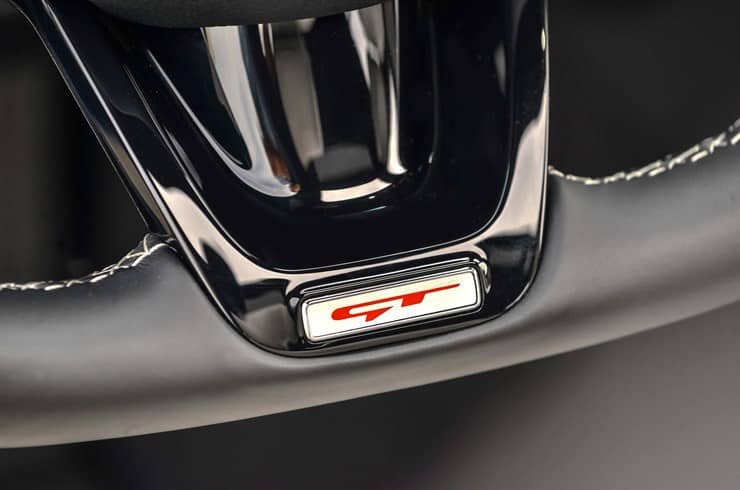 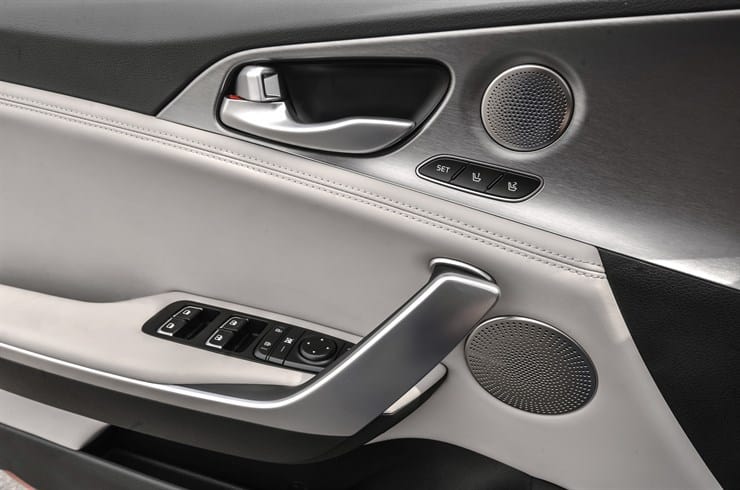 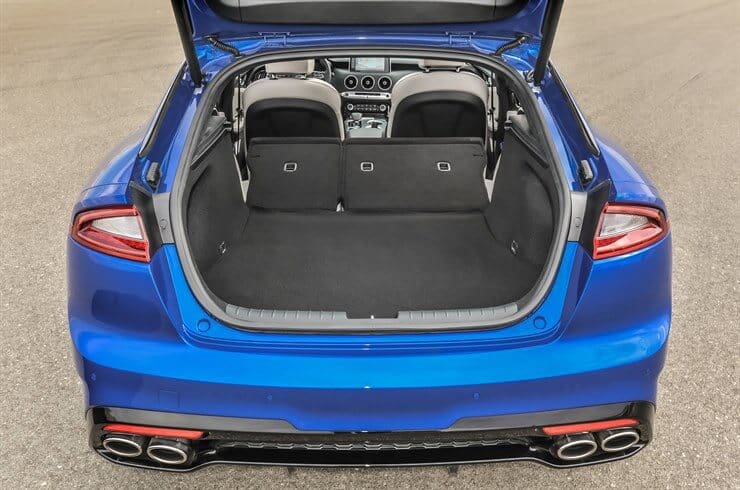 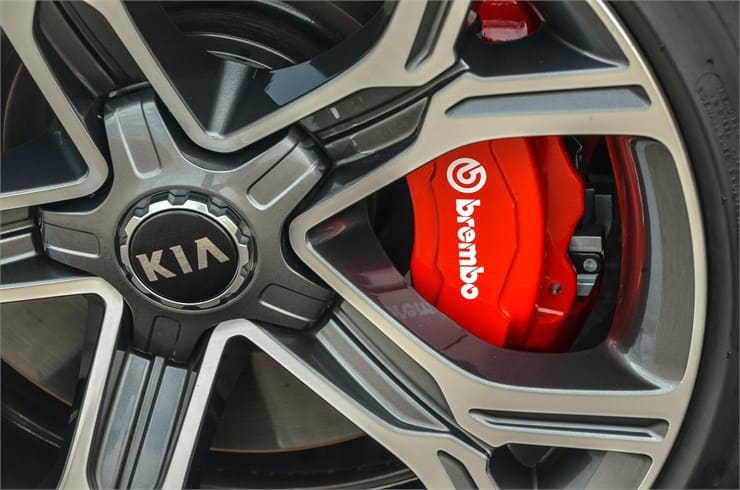 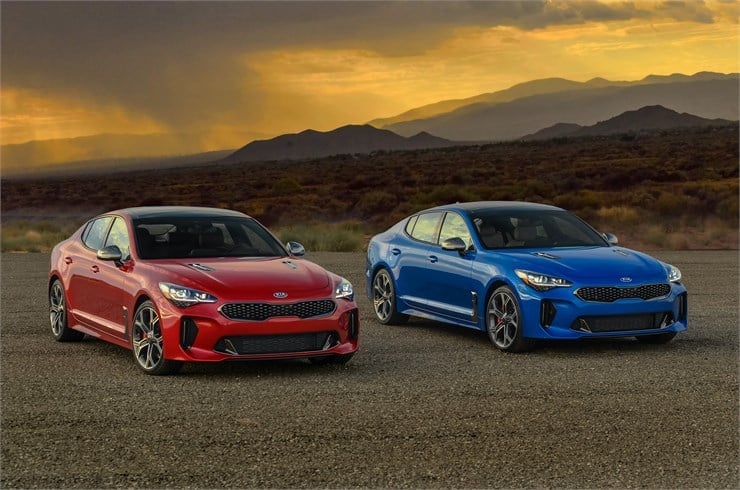 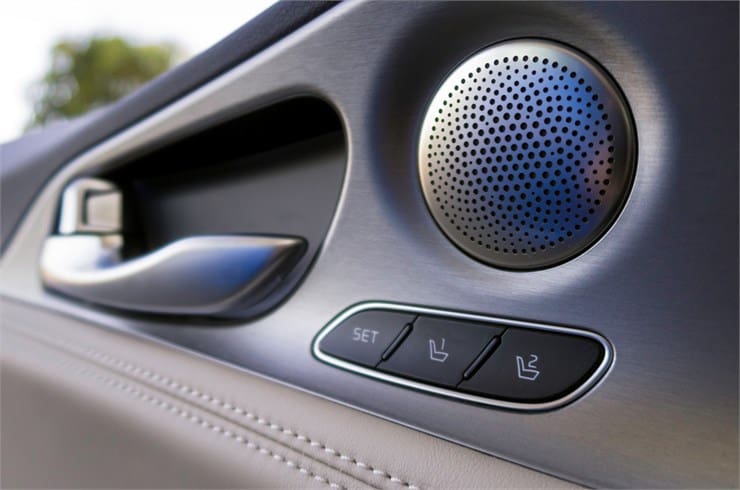 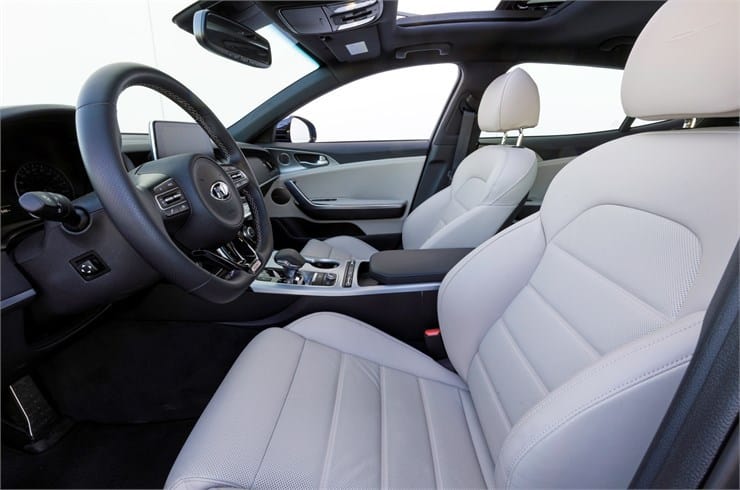 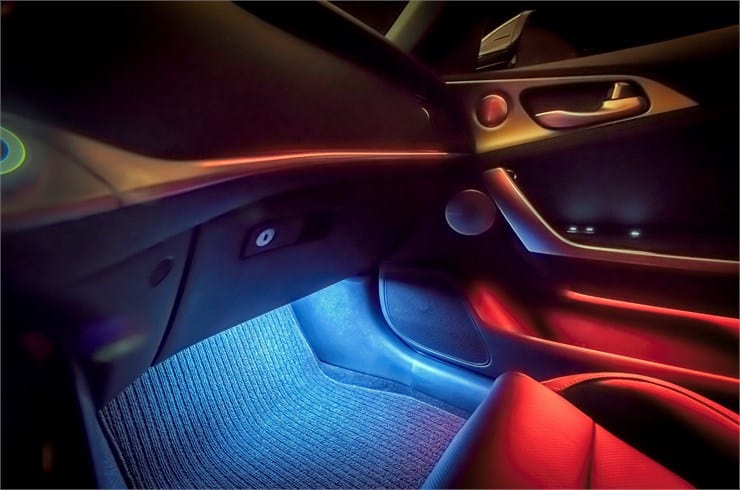 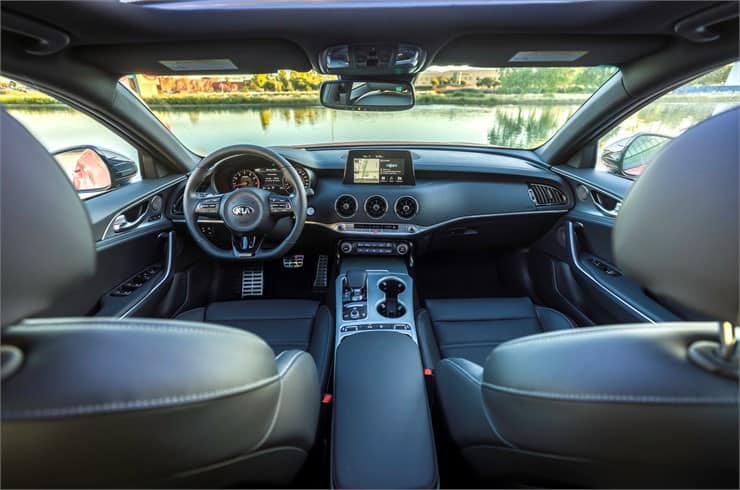 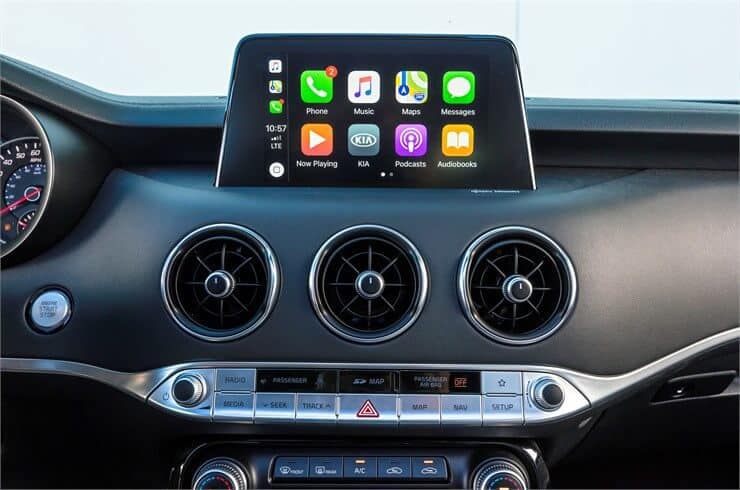 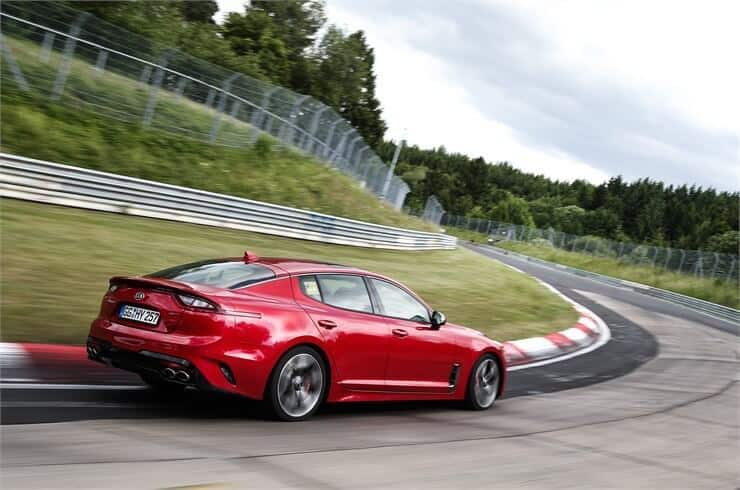