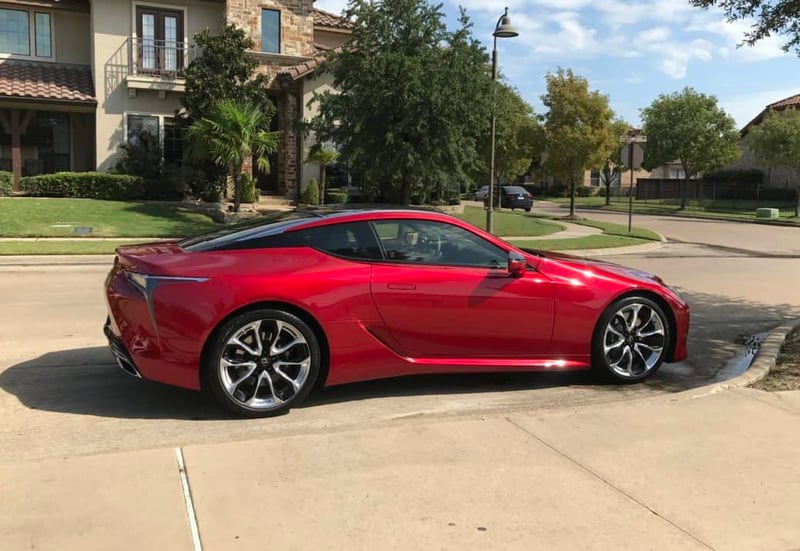 If you are trying to drive around incognito, the 2018 Lexus LC 500 coupe is the wrong car in which to do it.  This car turns heads, invokes conversations from strangers, and makes people hang out the window, cell phone in hand, driving down the freeway at high speeds.

Most people don’t know for sure what it is, but they know it looks hot.  Rarely does a car look great from every angle, but the LC 500 does.

It starts in front with the Lexus spindle grill and LED headlamps that point to that grill.  As you look down the sides, the 21” forged wheels look fantastic, and you can’t help but notice the wide haunches that house vents to cut down on wind resistance.  From behind, you see a Corvette-inspired rear end with a built-in spoiler and massive dual exhaust.  Lexus took a cue from Jaguar with pop-out door handles, and the roof appears to float above the rear quarters.

Lexus took a cue from Jaguar with pop-out door handles.

As you raise the hood, you see a 5-liter V8 that fires off 471-horses without the help of a turbo or supercharger.  This rear-wheel drive coupe will transport you from a dead stop to 60 miles per hour in just 4.4 seconds.  Mated to the big V8 is a 10-speed automatic transmission that can be shifted from magnesium paddle shifters.

By the way, the LC also comes in a hybrid version, which we’ve already reviewed at CarProUSA.com, under car reviews.

As you take your seat behind the power tilt and telescoping leather steering wheel, you see one of the most exquisite interiors you’ll ever see.  A mix of soft-touch materials surround you and white stitching accents can be found everywhere.

A bright, colorful driver info center with digital speedometer sits in the middle of the tachometer, which doesn’t redline until 7100 RPM incidentally.  If you don’t like that look, no worries, a button on the steering wheel slides the round tachometer to the right to reveal even more info.  I love the aluminum pedals on the floorboard, and it has a terrific color heads-up display.

There are two stalks that protrude on both sides, near the top of the steering wheel.  On the left you can turn off the traction control, to the right you change the driving modes from Eco, to Comfort, to Sport, and my favorite of course, Sport Plus which changes everything on the car, including the sound.

Sport Plus changes everything on the car, including the sound.

The mouse pad works great when you are looking at the screen, but there’s the problem, you have to take your eyes off the road.  From the pad, you scroll across for the audio, Bluetooth, apps, and climate among other things.

Officially the LC is a four-seater, but the back seat occupants had better be children.  Both front seats power-slide forward for ease of entry into the rear, but it’s tight back there.  Although the short rear end looks great, you are limited on trunk space.

As you would expect, the LC 500 comes well equipped, but my tester has almost $10,000 in options including the $2695 wheels, the upgraded Mark Levinson sound system, and the convenience package which includes park assist, blind spot monitoring, and rear cross-traffic alert.

I love this car, I really do, and unlike a Corvette, it is much easier to get in and out of.

This car also has the almost $3000 Sport Package which gives you the Alcantara seat inserts, and a full carbon fiber roof, which not only looks good, but it lowers the center of gravity of the whole car.

I love this car, I really do, and unlike a Corvette, it is much easier to get in and out of.  The conundrum is what is this car?  It looks like a true sports car, but with the 10-speed transmission and light, somewhat unresponsive steering, it just doesn’t feel like one.  It comes close in Sport Plus mode and it certainly sounds like a sports car in that mode.

My conclusion:  It is a really fast, great looking luxury sport coupe that would make a terrific daily driver.  A little trivia here:  LC stands for large coupe. 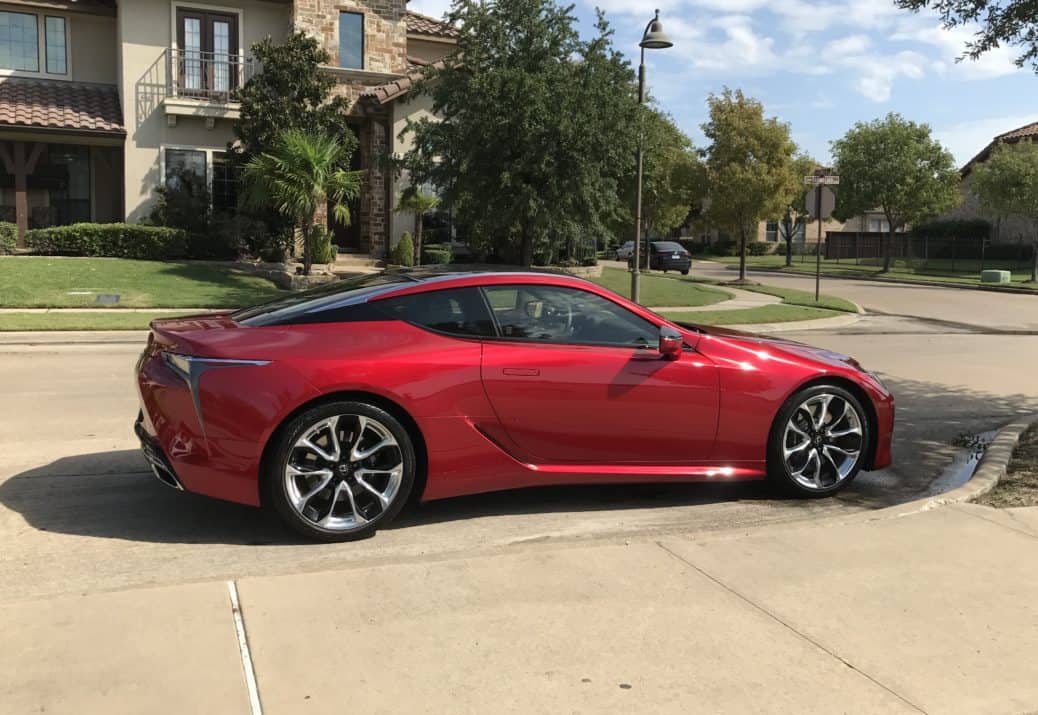 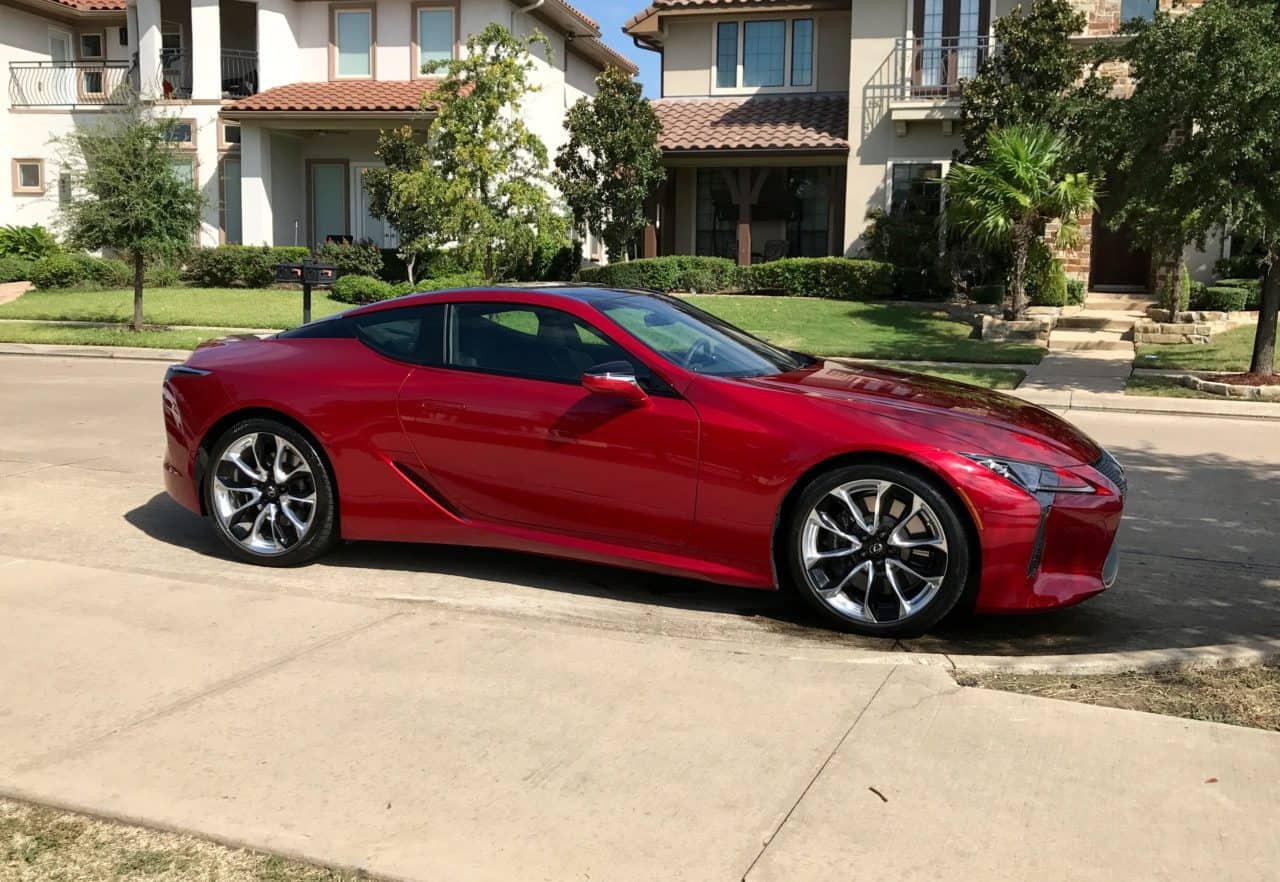 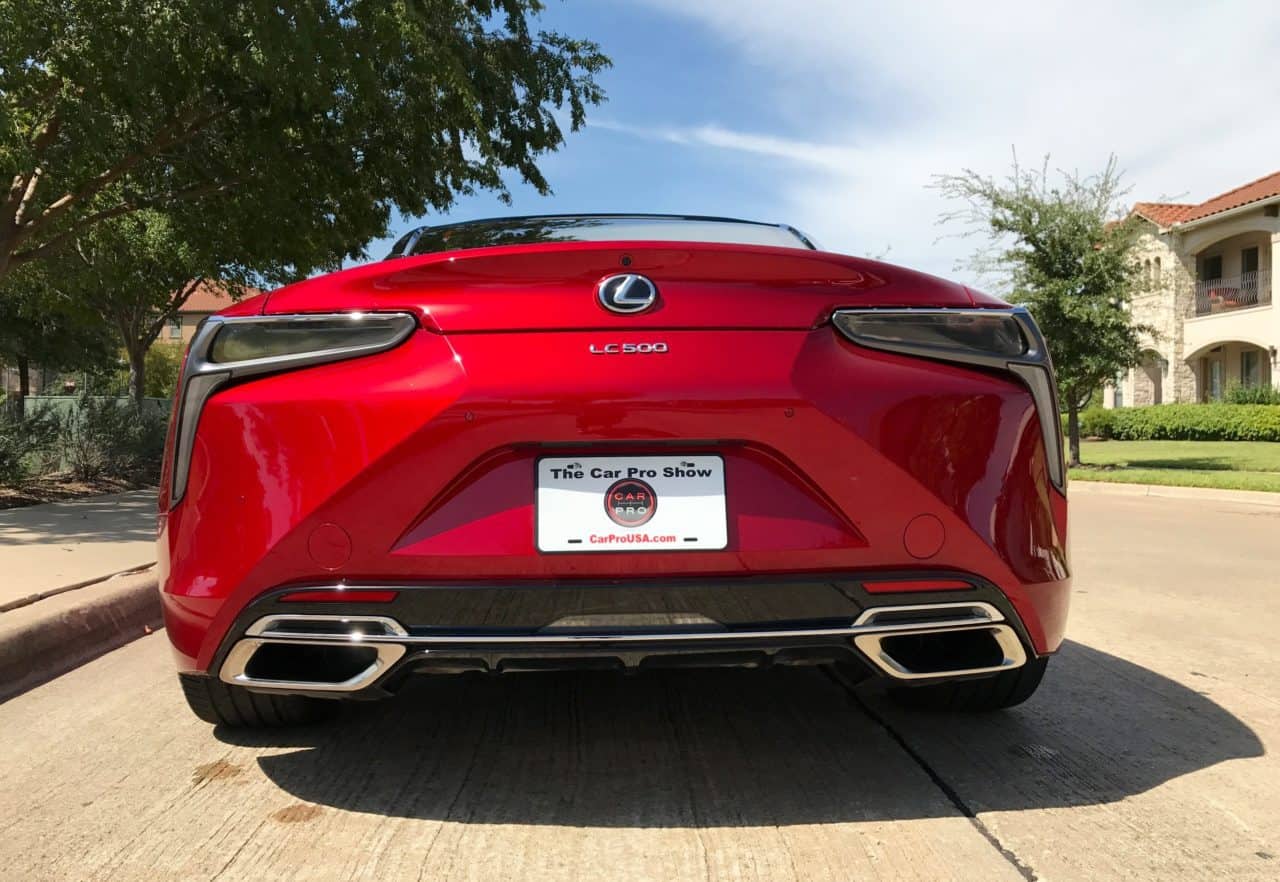 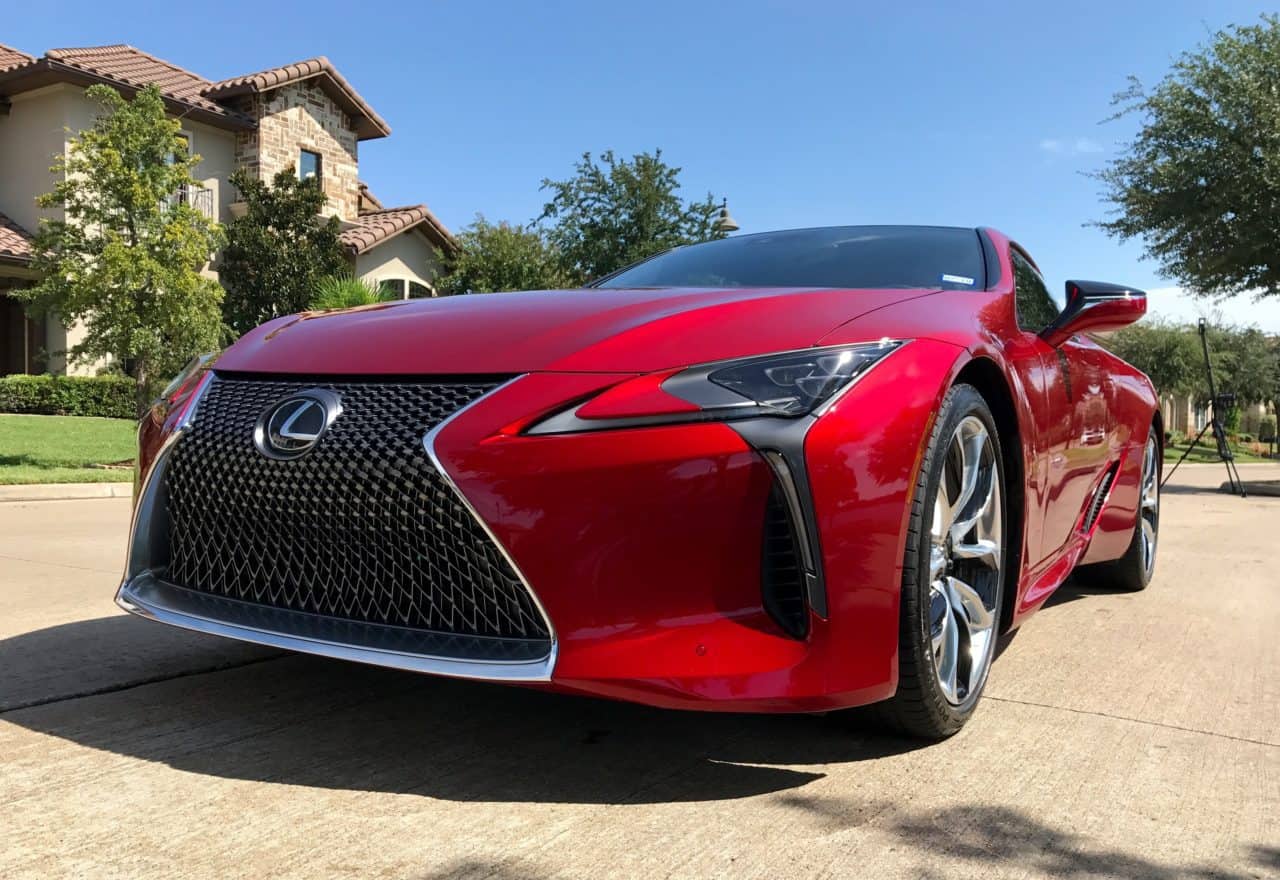 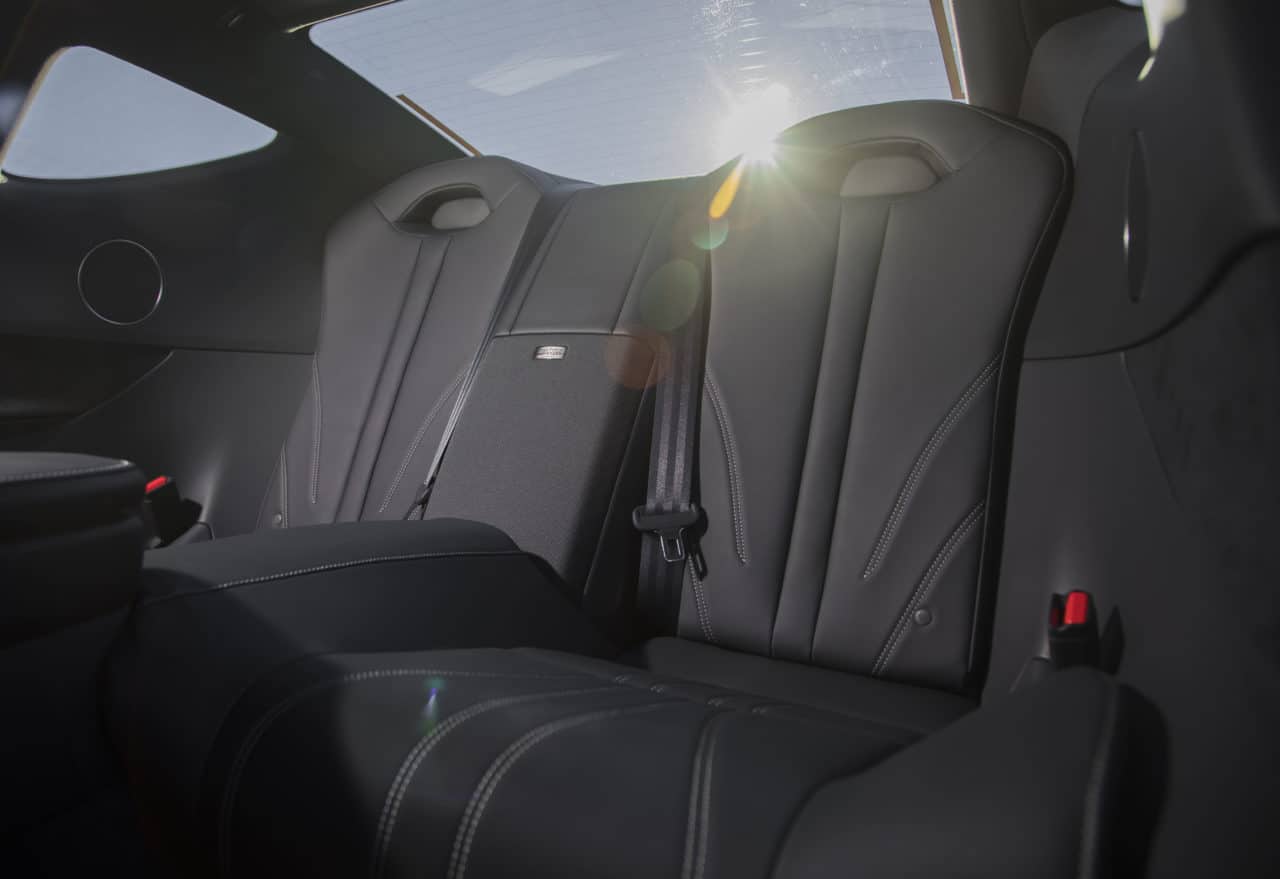 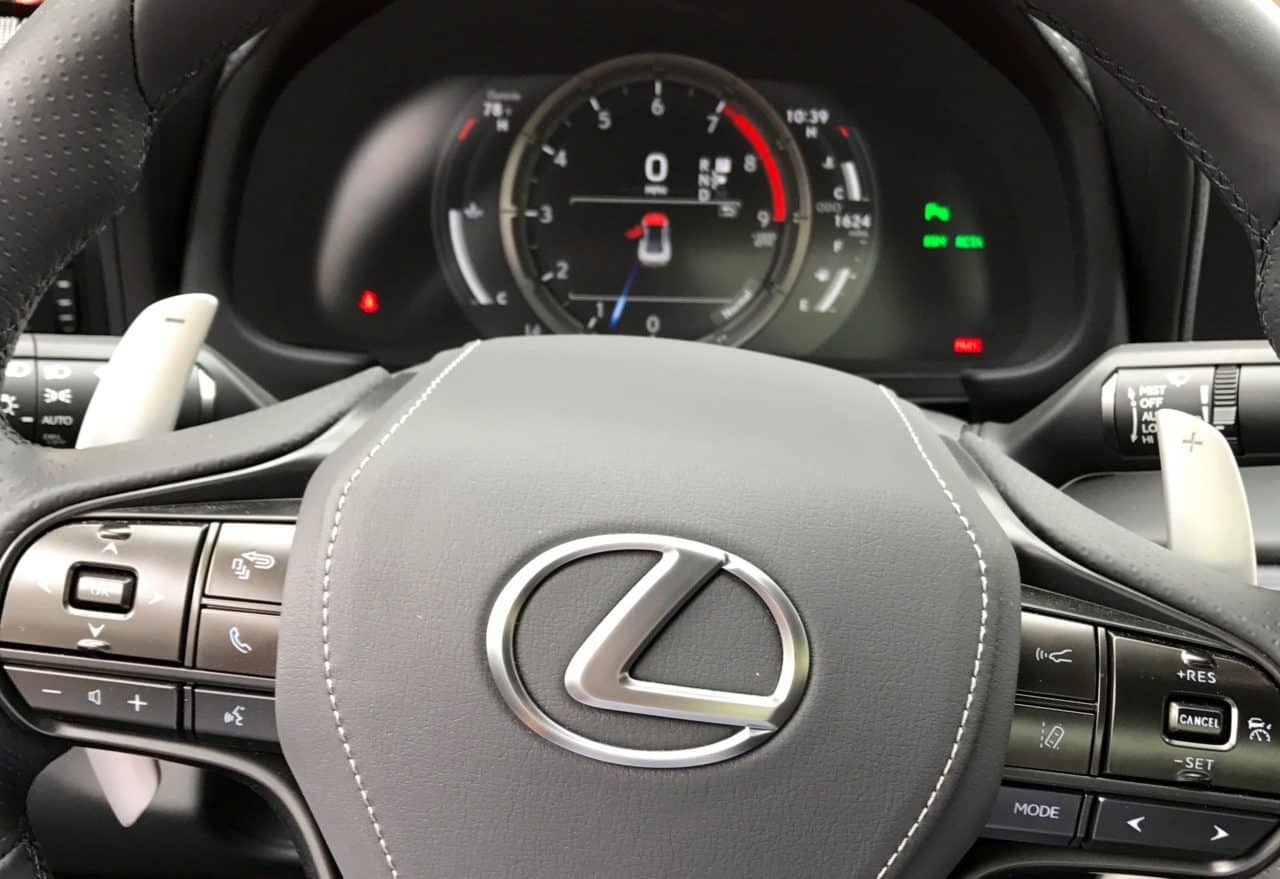 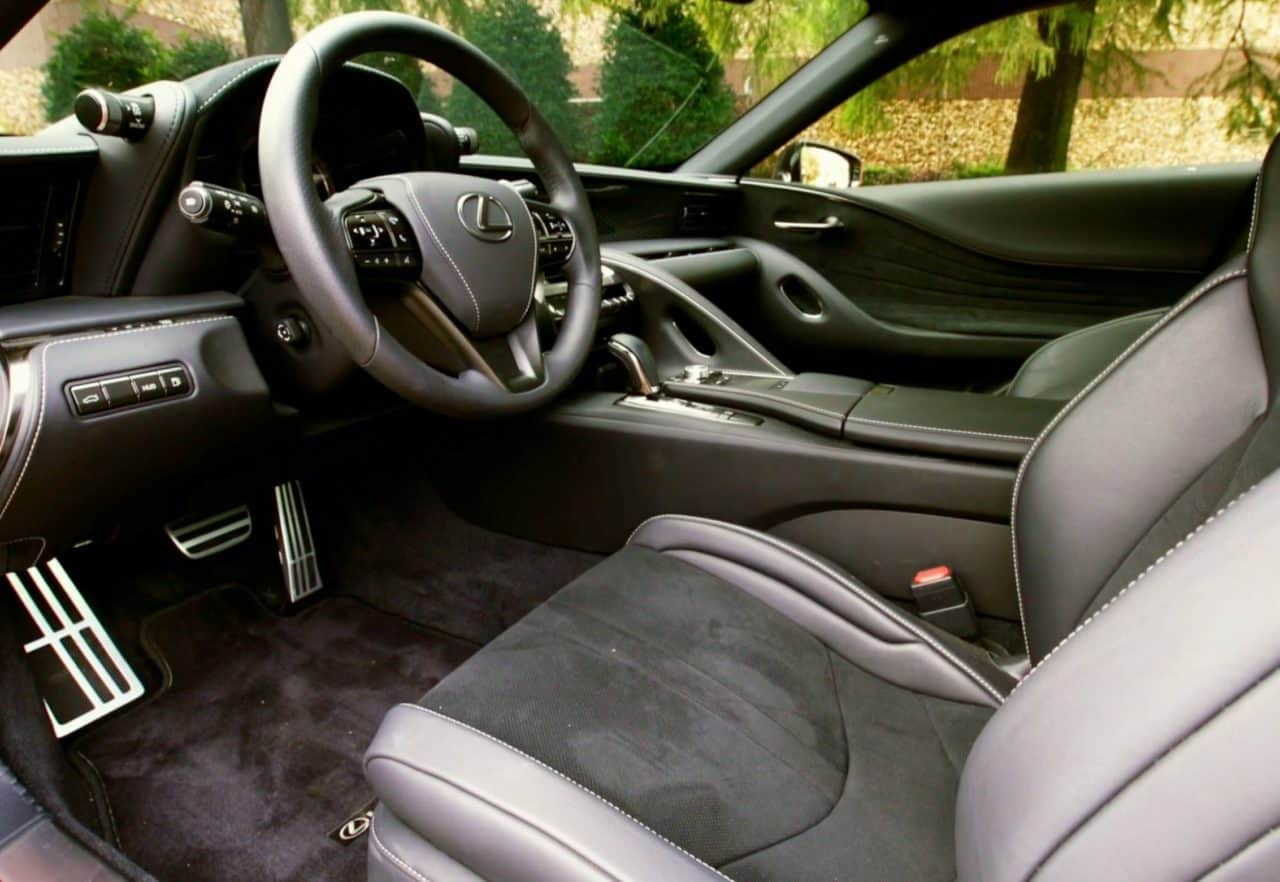