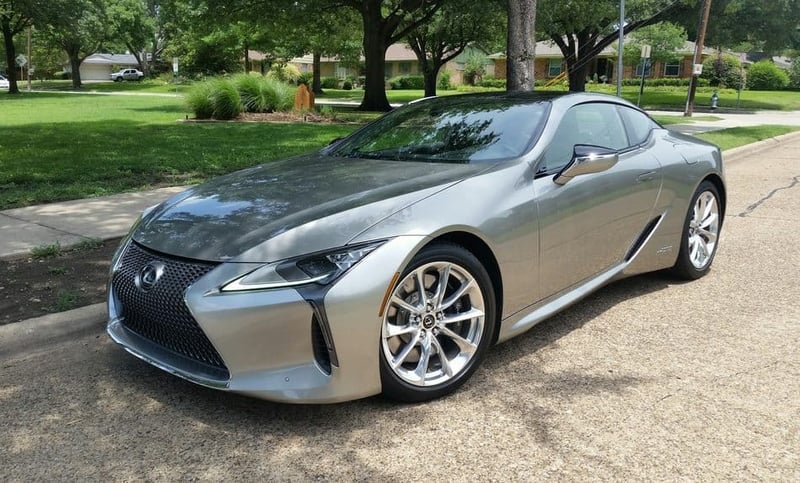 The sensuous silver coupe in my driveway wore curves and creases from the future.

Low and wide, the car looked like some grand tourer from 2020 shrouded in mystery and polished paint – if not stardust.

Get this: The slinky coupe glistening in the morning sun was a Lexus, the luxury brand that gave us clumsy, wildly exaggerated vehicles like the RX and NX crossovers.

Is it still 2017? Is the eclipse over? Am I still unqualified to be president?

Absolutely, I think. The compelling coupe was a preproduction version of the 2018 Lexus LC 500h (“h” for hybrid), a luxury coupe that will share a platform with the next LS full-size sedan.

All of a sudden, excessive Lexus has learned to blend subtlety into a vehicle, creating a car in the LC that kind of defines soft, edgy geometry.

Extremely short overhangs helped make the 4,400-pound coupe appear lighter, while the front fenders wrapped so tightly around the wheel-wells they looked kind of spare.

Although the doors were mostly smooth, a prominent character line sailed over the door-handle, continuing along the edge of the roof pillar.

A second, more dramatic line down low curved around to a long, slender vent in front of the rear fender-well – a style element I could live without.

Hey, I got over it once I walked around to the back of the LC, where I could admire the broad shoulders over its rear fenders and the graceful tapering of the top as it slid into the back window and trunk.

Though the rear of the car was kind of thick, wild-looking horizontal taillamps with clear lenses gave it some flare.

If Lexus had asked, I would have requested the regular LC 500, powered by a stout 5-liter V-8. (I find most hybrids to be about as exciting as pulling weeds – even if Elizabeth Hurley is helping me.)

My 500h model – estimated to cost $100,000 when it arrives later this year – did a shockingly good job of maintaining the new coupe’s prestige.

The rear-wheel-drive coupe combines Lexi’s ubiquitous 3.5-liter V-6 with a permanent-magnet AC motor to generate 354 horsepower and 257 lb.-ft. of torque.

Probably the big news, though, is Lexus then bolted an unusual transmission to the engine that uses a four-speed automatic and three ratios in a CVT to somehow create the equivalent of a 10-speed automatic.

While the 500h speaks mostly in the muted tones of a hybrid, it leaps vigorously away from stops, clicking quickly through its array of gears like a real sports-coupe.

Sixty miles per hour should arrive in a fleet 4.8 seconds, Car and Driver estimates. In addition, the husky Lexus should get 30 miles per gallon in the city and 38 on the highway, according to estimates.

All of which is fine, but I just appreciated the way the coupe quickly downshifted with every stab of the throttle, instantly gathered revs and sped away with muted six-cylinder noises. Spinning 6,000 rpm was easy.

In fact, the only times I noticed the car’s hybrid underpinnings was when I realized we were cruising along at 45 or 50 mph solely on electric power.

Best of all, the 500h’s firm, sophisticated suspension kept the car’s big body flat as it turned crisply into corners, doing a decent job as well of swallowing big bumps.

Just about as impressive, the 500h’s quick steering was well-weighted and returned decent road feel.

If you still have doubts about a six-figure Lexus GT coupe, however, just look inside.

I thought the black leather interior in the car was as good as anything I’ve seen from the Germans.

A sleek flat-topped dashboard with stitching on its edges, for example, rolled down to a slightly concave mid-dash that hid the video screen when the 500h wasn’t running.

With no bulky center-stack to spoil the view, the lower dash flowed elegantly into a broad console, offering six silver switches for the climate control and knobs on the console for the stereo system.

Technically, the 500h has a back seat, but it’s mostly fit for people three feet tall. Otherwise, just ignore it.

I predict the LC 500 will attract as much attention as a New York model on Main Street.

Finally, Lexus has delivered a thoroughly developed high-end coupe with stunning looks, impressive performance even in the hybrid and sure-footed handling.

I bet Mercedes-Benz and BMW will be watching closely when it arrives. 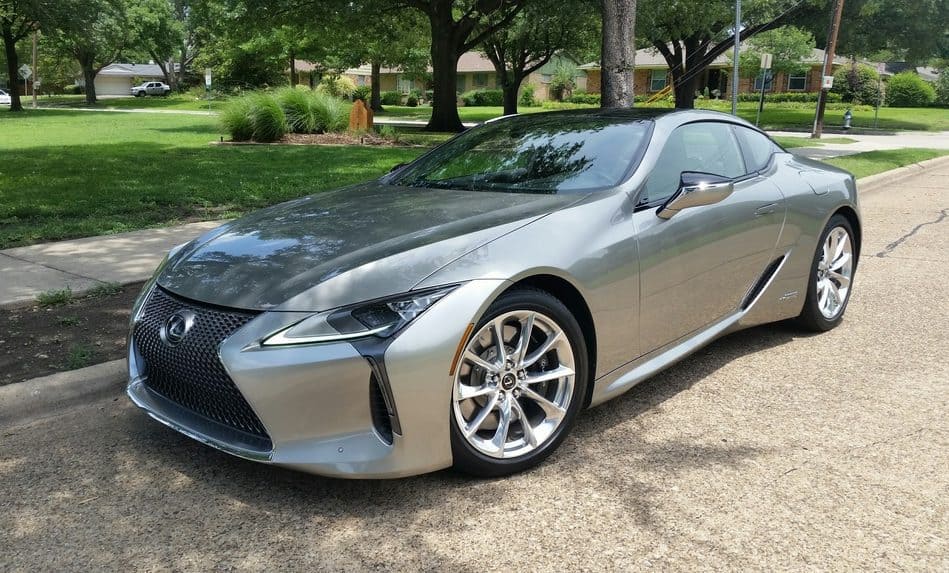 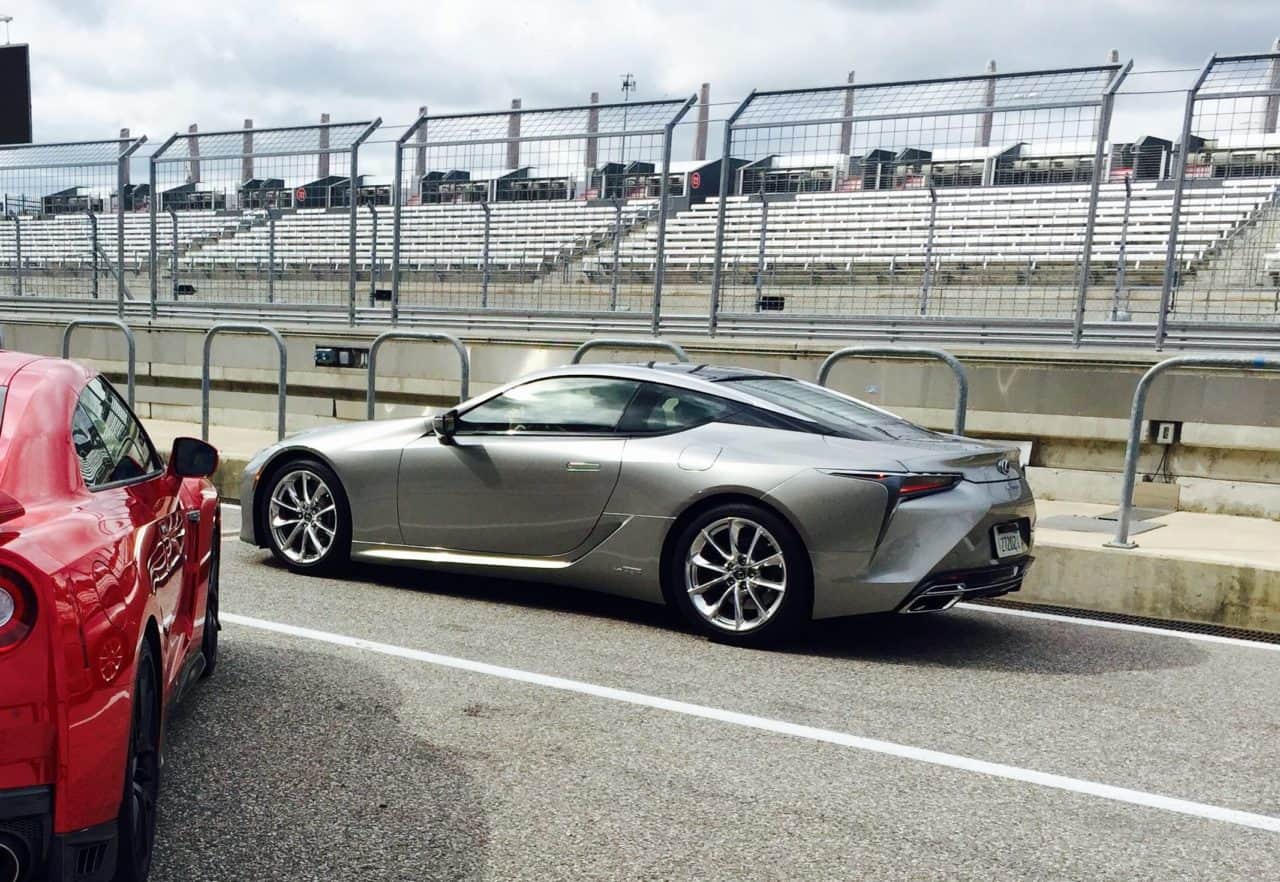 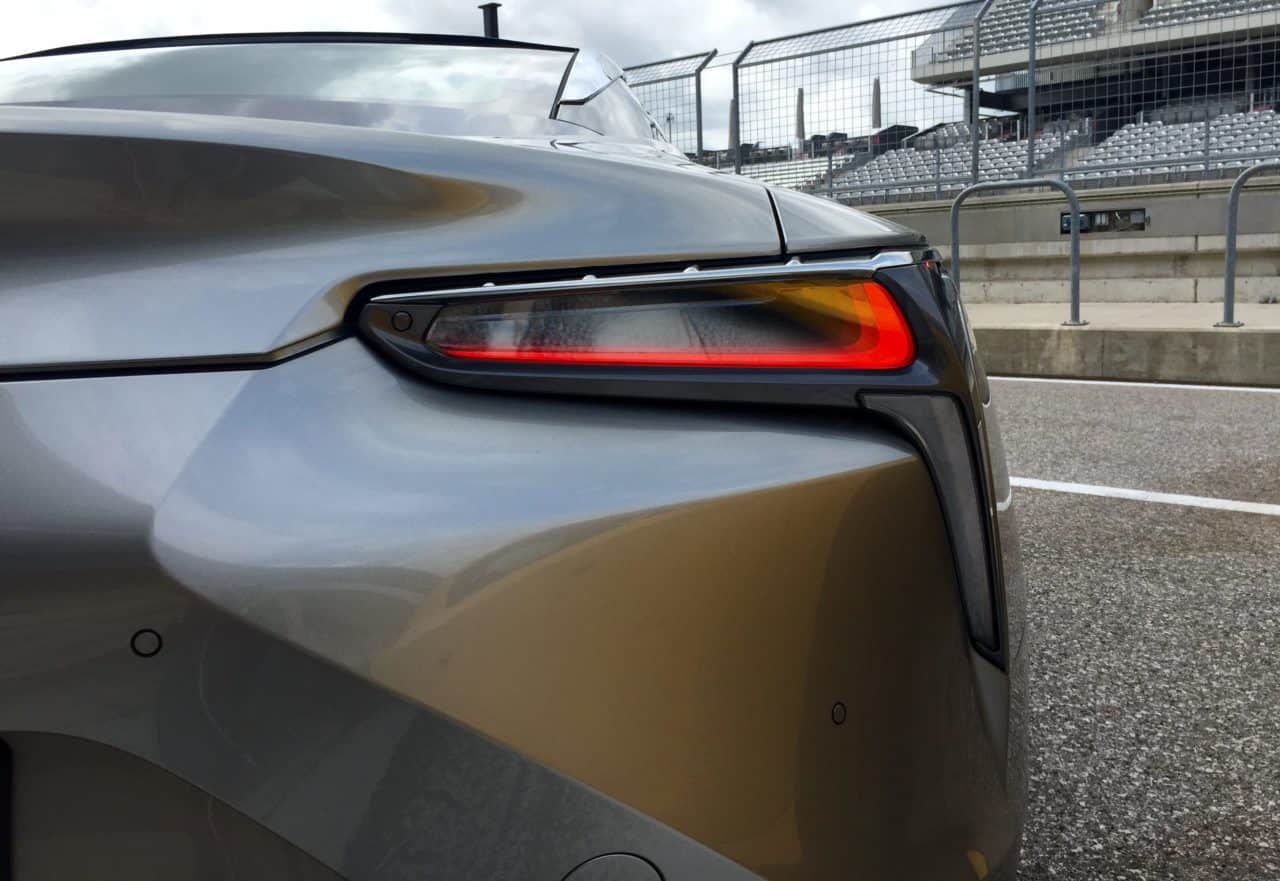 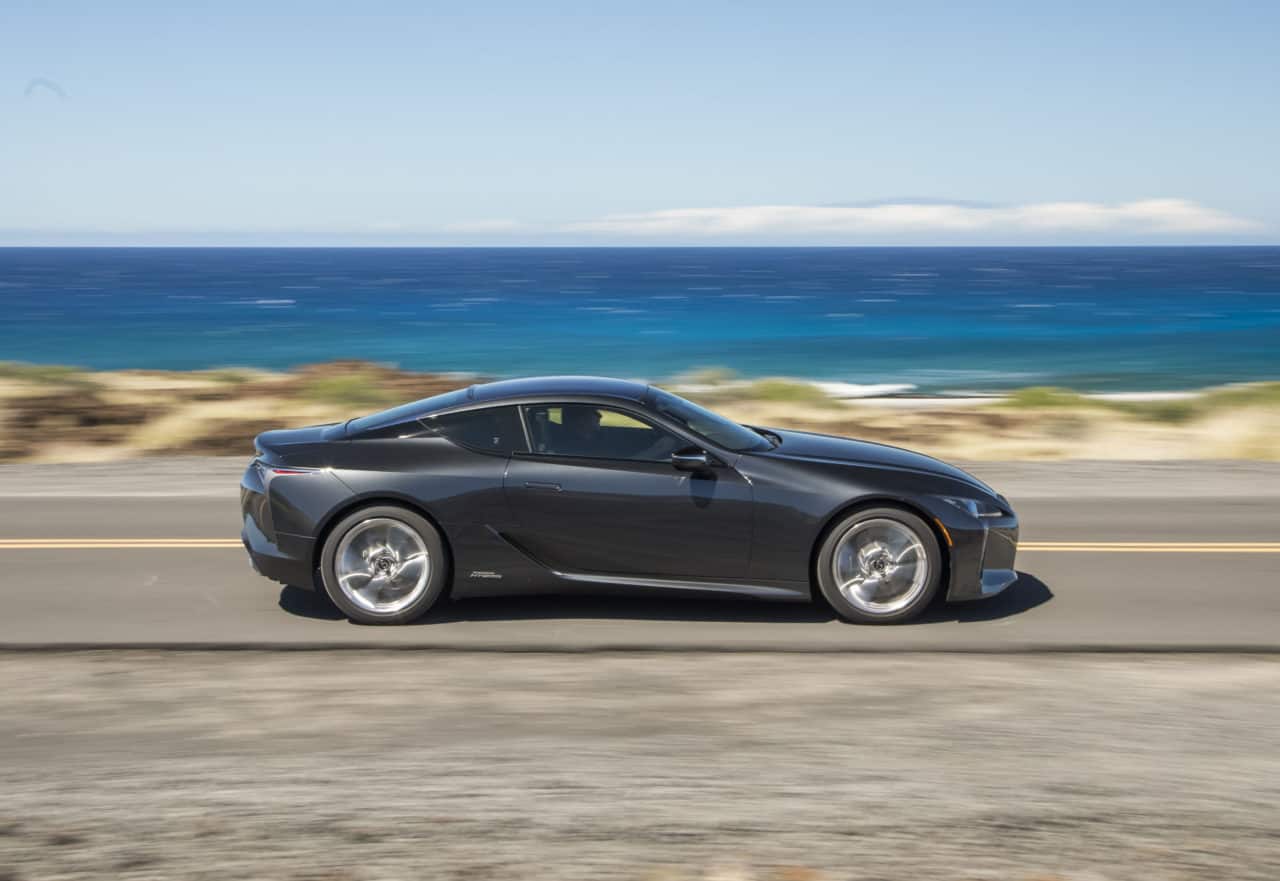 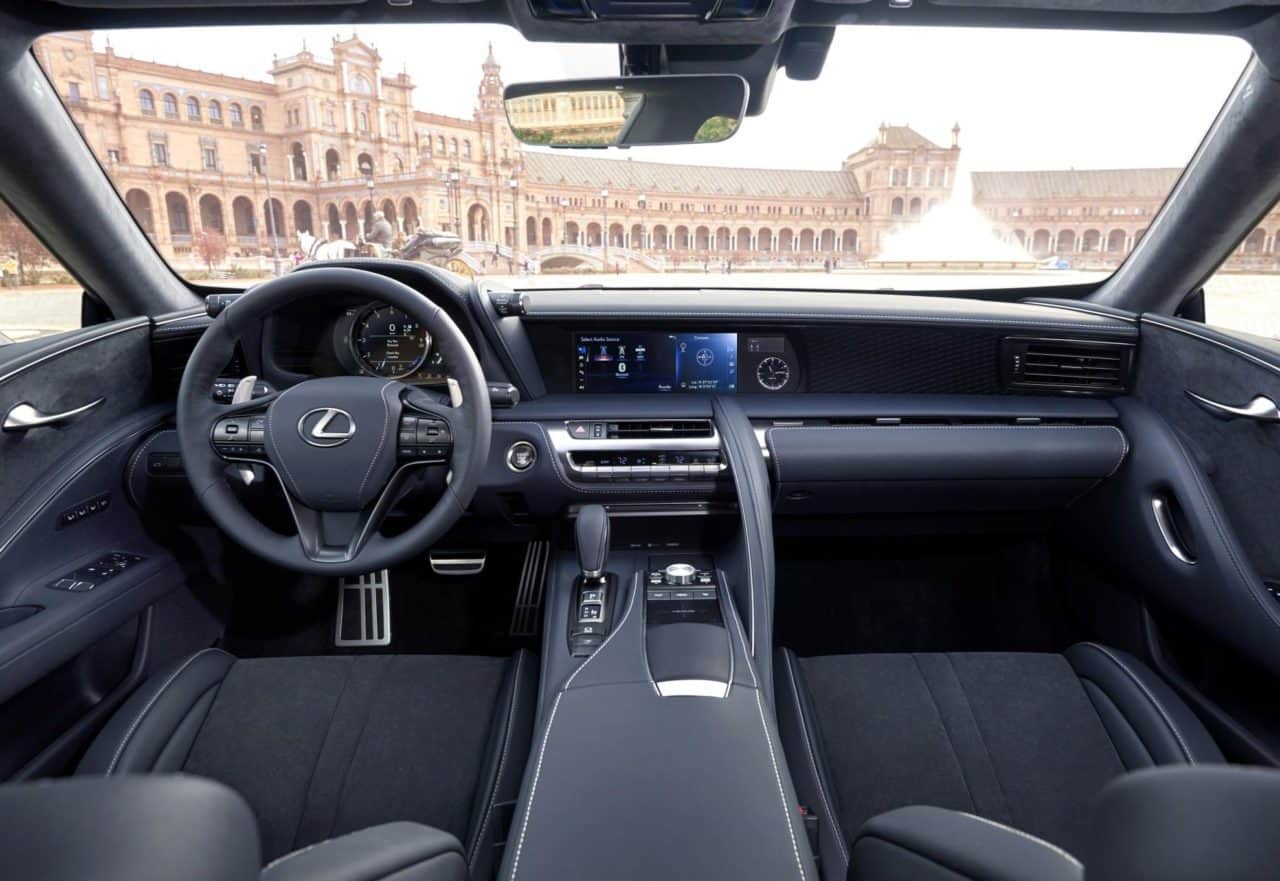 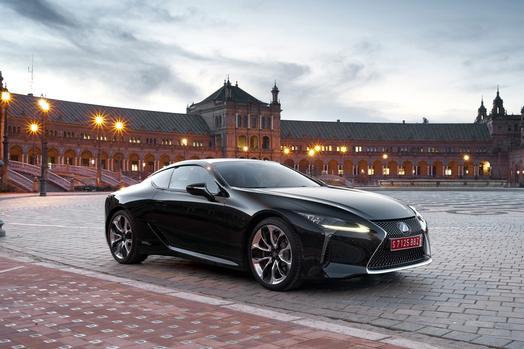 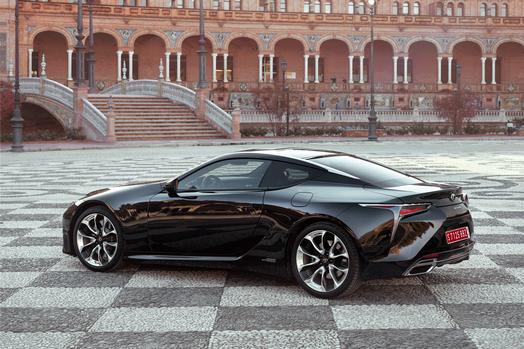 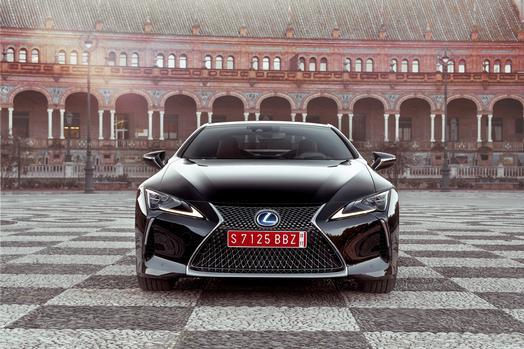 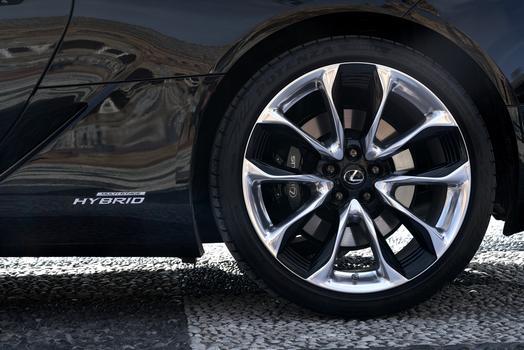 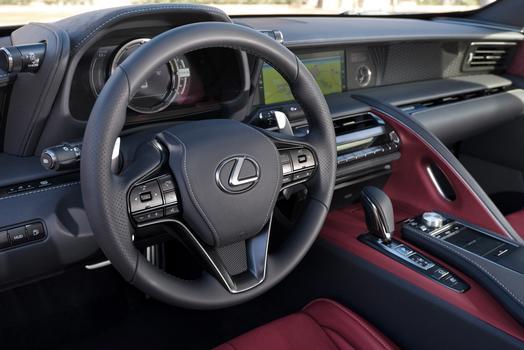 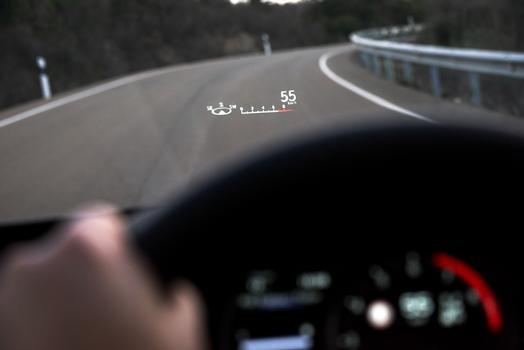 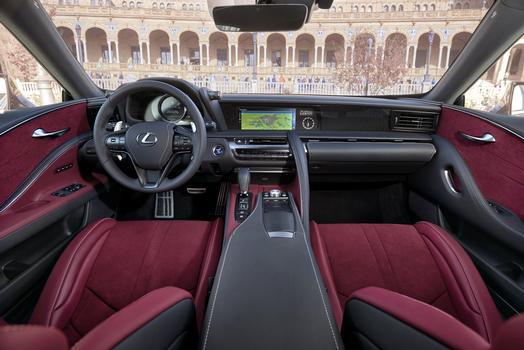 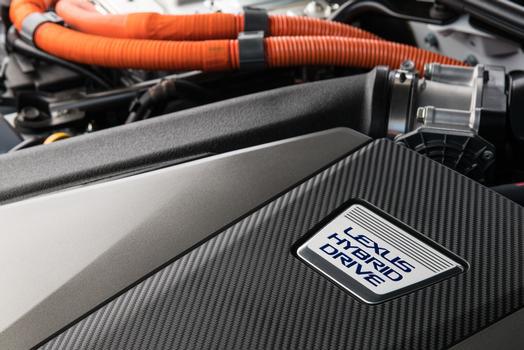 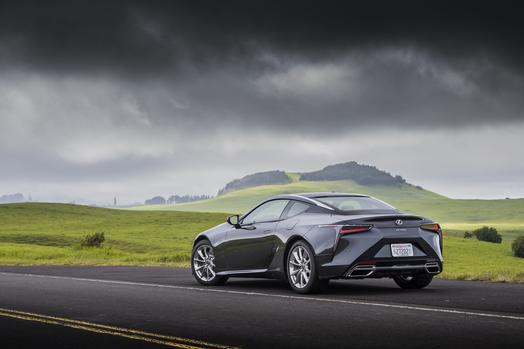 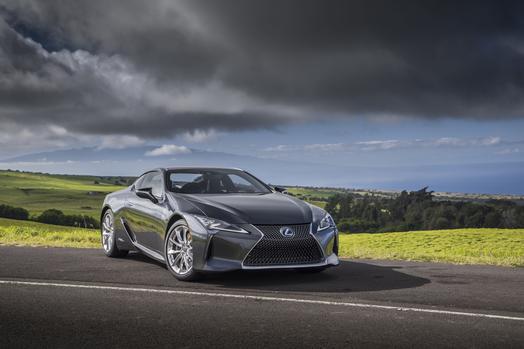