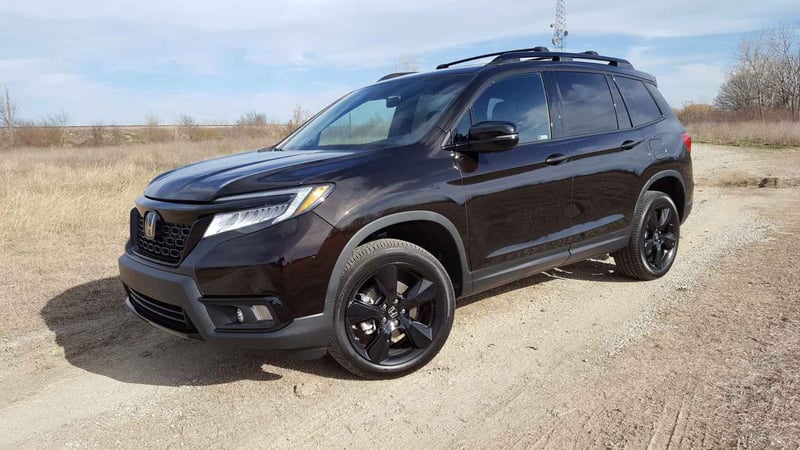 When a barroom brawl breaks out, Honda generally keeps its head down – usually bent low over a thick book on the beauty of physics.

So, I had to stare slack-jawed at the “murdered-out” 2019 Honda Passport I had recently, not sure whether to laugh or back away slowly.

Although based heavily on the milquetoast Pilot crossover, the Passport exuded a sort-of black-leather toughness missing from Honda’s other crossovers.

Get this: The Passport’s all-wheel-drive system included settings for sand, snow and mud, and in Elite trim – such as the one I had – offered 8.1 inches of ground clearance.

Granted, the new mid-size Passport can’t crush rocks at Moab like a Jeep Wrangler or Ford F-150 Raptor, but it flashed some uncharacteristic “soft-road” personality.

I hope Honda rewarded the design-team with new nose-rings.

Though the Passport is based heavily on the Pilot three-row crossover – sharing its engine, transmission and basic platform – it is 6.5 inches shorter, stands about an inch taller and feels firmer.

As you may recall, Honda last sold a Passport model 16 years ago based on an Isuzu SUV. It was not an instant classic.

With the entire planet rushing now to buy SUV-like crossovers, the new Passport will slot in between the compact CR-V crossover and the mom-mobile Pilot.

You will recognize it immediately – essentially a cousin to the Pilot and Ridgeline pickup that got lost for a few months in some So Cal martial-arts zen.

Like the Pilot, my Passport featured a blacked-out grille, but coupled it with more radical headlamps and a less bulky front fascia.

It also wore familiar sculpting on its hood and a prominent character line through the door-handles, as well as slightly flared and more muscular rear fenders.

The combative Passport passed on the Pilot’s conventional alloy wheels, opting instead for black five-spoke 20-inch wheels wrapped with 265/45 tires – the tiresome auto-industry equivalent of a sleeve of tattoos.

The Passport doesn’t just look leaner and meaner. It is quicker and reacts more sharply than the Pilot, though at nearly 4,300 pounds, it’s not much lighter.

As in the Pilot, the lazy throttle on the Passport requires a good jab to awaken the 280-horsepower in its 3.5-liter V-6, which responds with a muted growl and a strong, smooth surge to speed.

Sixty miles per hour arrives in 5.8 quick seconds, about 0.2 of a second faster than the Pilot, according to Car and Driver, assisted ably by a nine-speed automatic.

The Passport’s fuel-economy, however, is a bit worse than the Pilot’s – perhaps from more aggressive gearing – at 19 miles per gallon in the city and 24 on the highway. The Pilot rings in at 20 and 27.

I’ll take the livelier performance of the Passport – even with a firmer ride that felt, despite a bit of jounce every now and then, better behaved.

While the suspension couldn’t do much for the 6-foot-tall Passport’s moderate lean in corners, it did keep body motions well controlled overall.

Likewise, the steering periodically quivered a bit with road feel – something kind of rare in a Honda.

As you would expect in a vehicle that cost nearly $45,000, the Passport offered plenty of standard features, including vehicle-stability assist; active cruise control; lane-departure warning; and mobile Wi-Fi hotspot capability.

Still, while accommodating, the black interior in my Passport wasn’t as distinctive as the exterior.

A flat dashboard in coarse but pliable black plastic, for example, was dominated by a 7-inch display screen that required drivers to use blankety-blank pads on the screen to tune the audio system.

Thanks, Honda. In return, I guess, you get Apple CarPlay and Android Auto integration.

At least the controls for the climate system were easily accessible from a horizontal panel beneath the display screen.

Meanwhile, a broad console in piano-black housed push buttons for the automatic – remember Chryslers from the ‘60s? -- as well as a nifty pad for recharging cellphones.

More average plastic covered the door panels, though, while the seats featured smooth black bolsters, patterned centers and really good leg- and head-room in back.

My Passport Elite, incidentally, did not arrive with a single option, but it did show up wearing a large “H” on its rump, a brand that almost always attracts lots of buyers.

They will find that this Honda includes a bit of strut and feistiness among its traditional virtues. Let’s hope we see more. 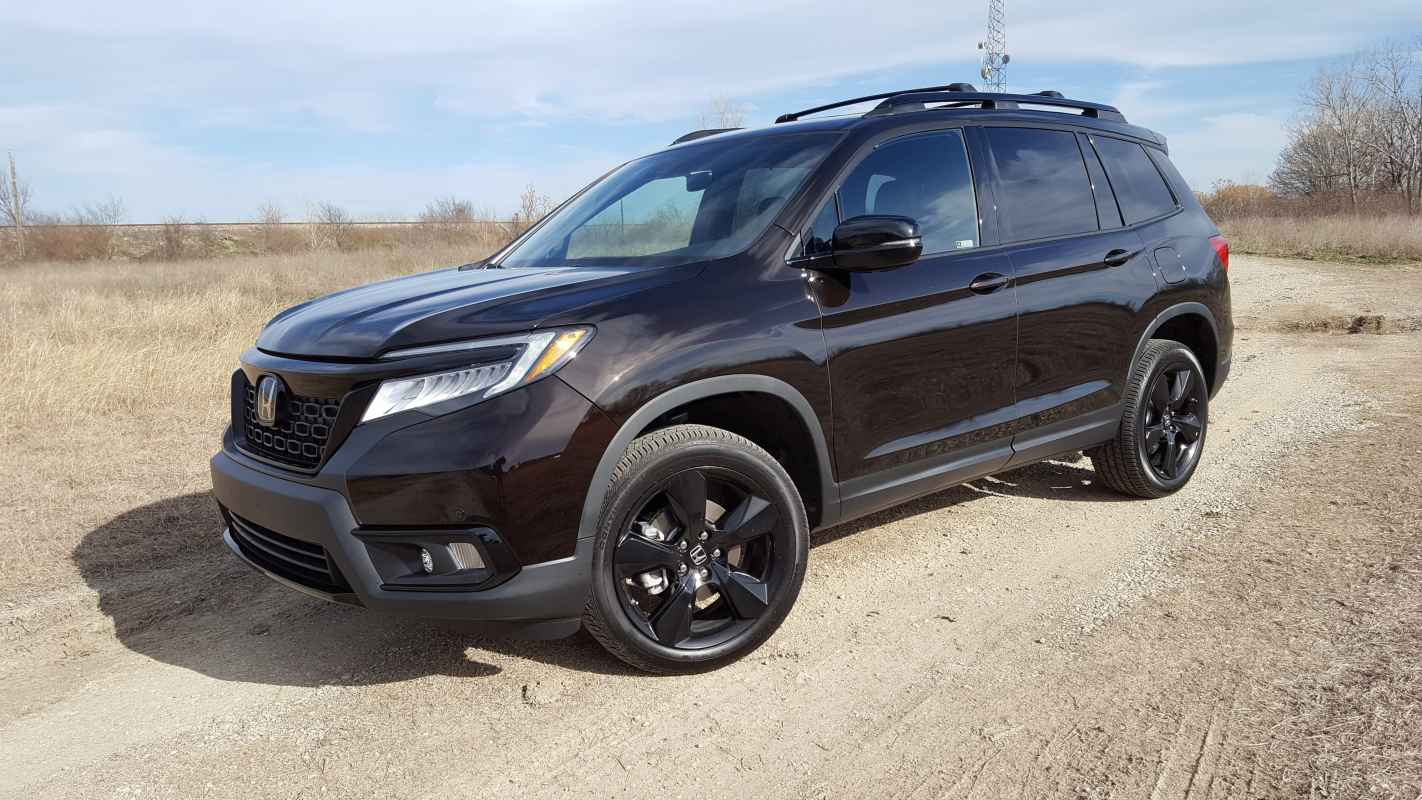 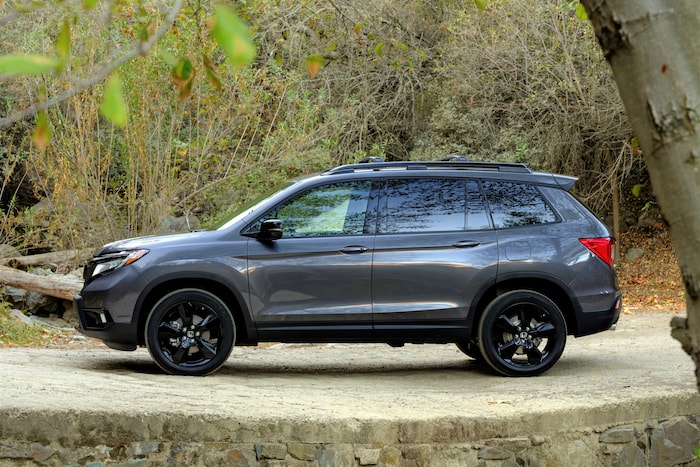 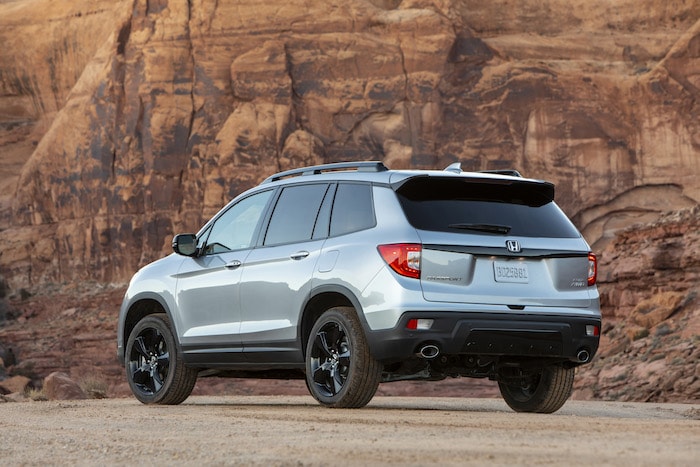 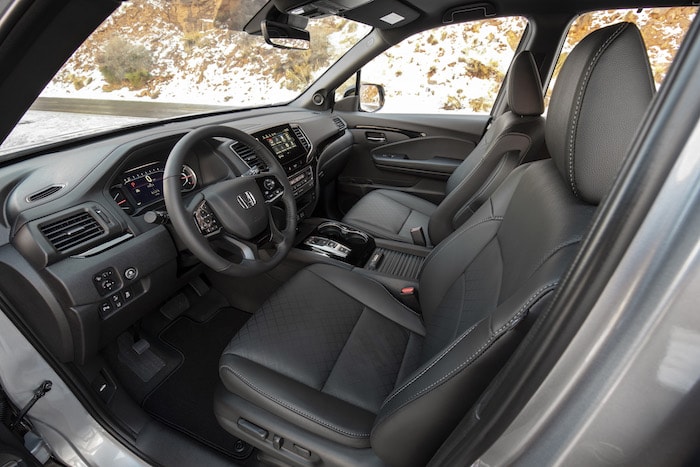 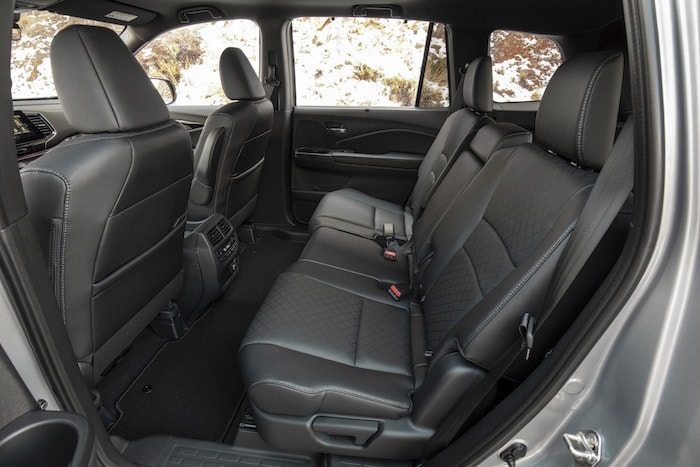 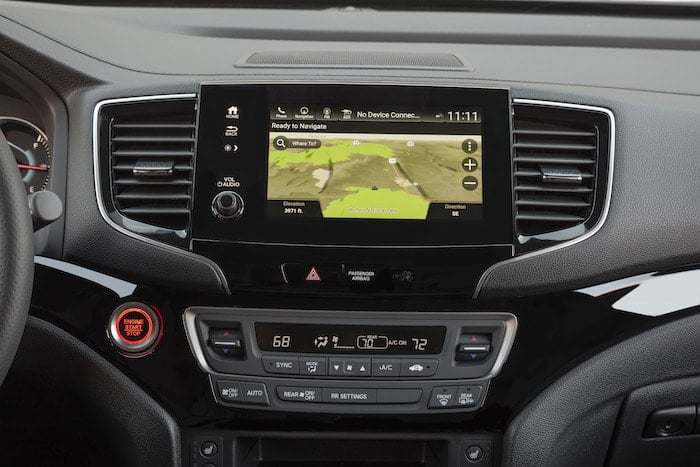 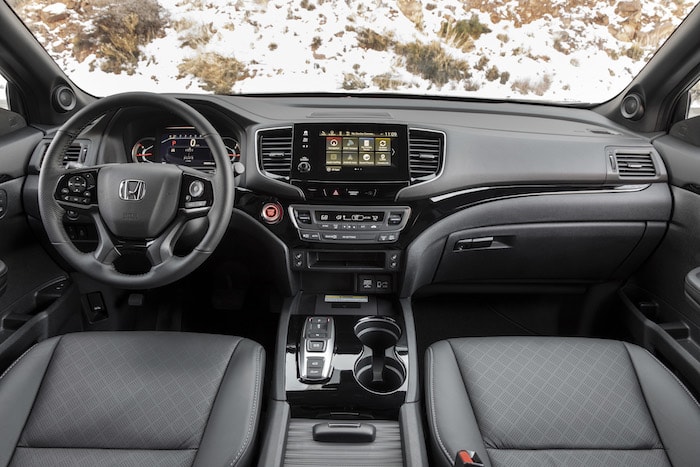 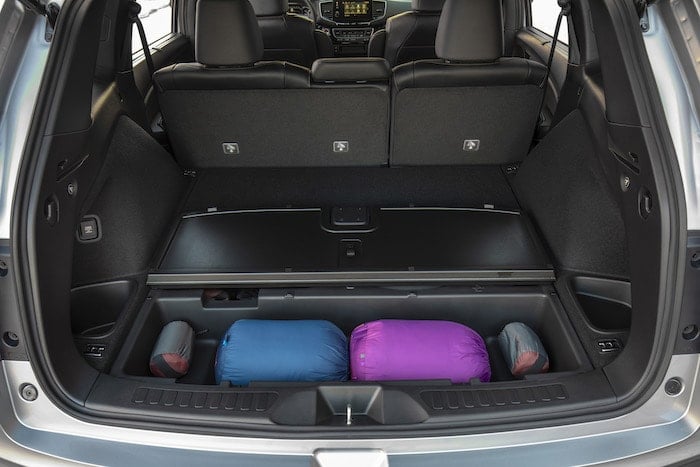 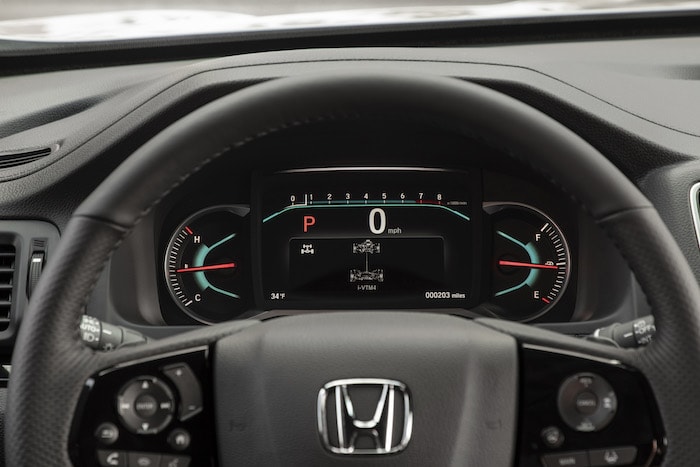 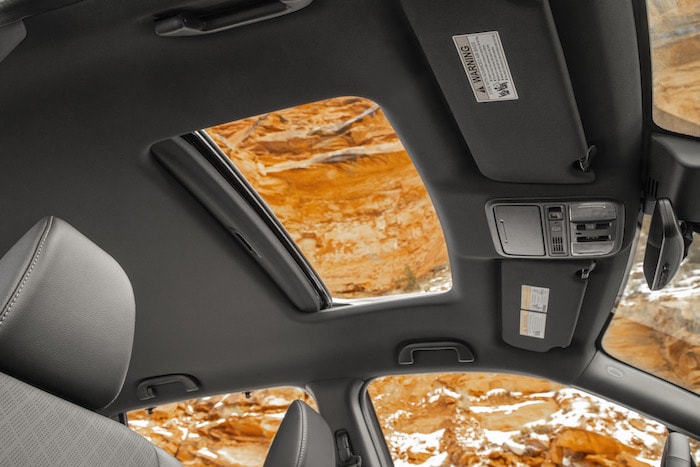 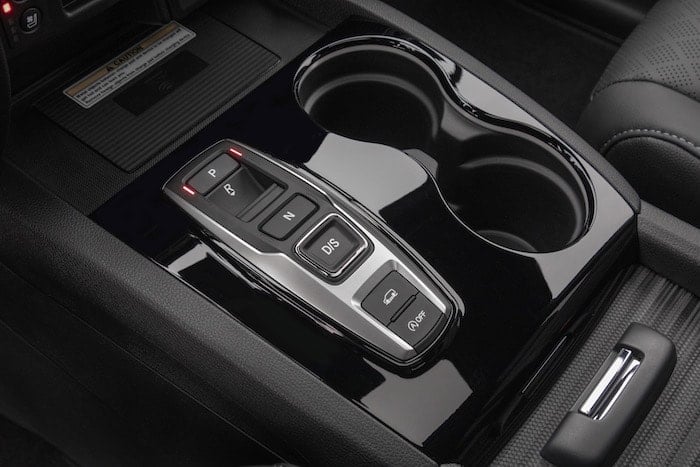 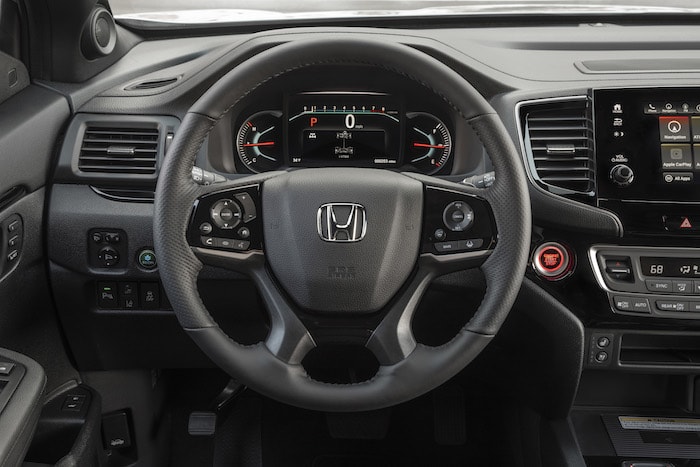