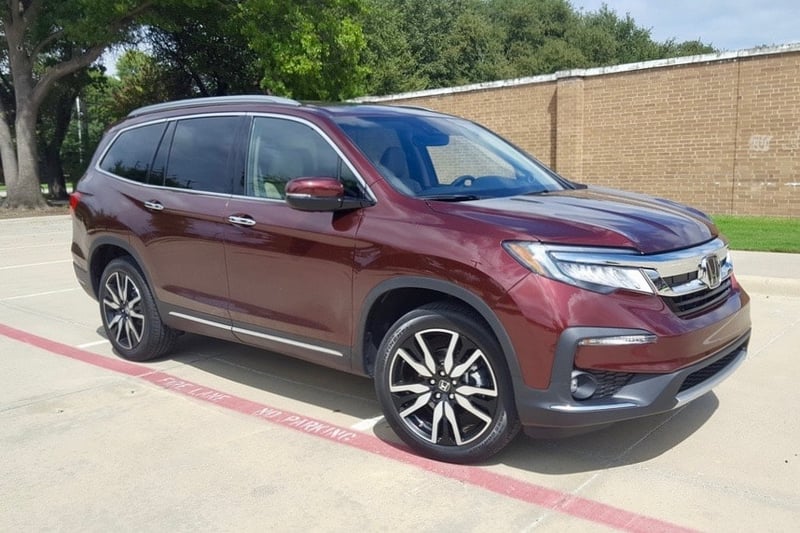 Even in a radiant shade of wine, the new Honda Pilot tends to disappear in the hard stucco glare of strip shopping centers – just like any other SUV/crossover, and Honda might be fine with that.

At least no one puzzles over its soft minivan lines or smirks at its face, once as blunt as some East German van.

For 2019, Honda ordered a facelift and tweaks to the mid-size Pilot crossover to make it look tougher – something I managed to achieve with wrinkles and a 60-something scowl.

Actually, the Pilot – whose sales rose an impressive 25 percent last year – could probably coast a bit on its solid reputation for quality and value.

All crossovers these days need to look as if they could tackle the Baja 1000 or the Rubicon Trail just as soon as they get back from the grocery store.

While few Pilots will likely ever go bounding over desert boulders, Honda did manage to politely scuff it up some, squaring off a few lines here and there and tugging some on the front end.

Though the Pilot still suffers from a relatively short front end – think minivan – a thick two-bar grille up front and horizontal high-tech headlamps do add some aggression, along with short body overhangs.

Meanwhile, a conventional character line sliced through the door-handles, zipping across slightly muscular rear fenders that imparted some flair.

After a week or so, I came to view it as somewhere between vaguely handsome and unremarkable, but I never spotted any real link to the Odyssey minivan.

Like the Odyssey, though, my all-wheel-drive Pilot relied on Honda’s venerable and well-developed 3.5-liter V-6, spinning out 280-horsepower.

For some reason, the normally lively V-6 was saddled with a lazy throttle, making it feel kind of sluggish accelerating away from stops.

Pilot owners don’t want to jar their little soccer teams, I guess. Honda’s mildly quirky 9-speed automatic didn’t help, sometimes acting jerky at slow speeds and producing sluggish downshifts, but I learned that all the Pilot requires is a heavy throttle-foot – something I excel at.

Put the spurs to the Pilot and it pulls reasonably hard, snapping off 6,500-rpm shifts and reaching 60 mph in a highly respectable 6.2 seconds, according to Car and Driver – which makes merging with traffic easy.

Moreover, it is rated at an acceptable 19 miles per gallon in town.

As you might expect, the Pilot’s mom-mobile steering felt a tad slow and numb, but it was precise and pleasant enough in traffic.

Likewise, the tallish Pilot preferred a leisurely pace around corners, leaning some predictably, but maintaining its composure.

Far more important to most buyers, the all-wheel-drive Pilot rode pretty well, relying on a car-based suspension that was neither too soft nor too firm.

Some of that could probably be attributed to the light-gray interior in my Pilot.

Although dominated by plastic, it was an easy environment to settle into.

A deep black-plastic upper dashboard, for example, rolled down onto a band of piano-black trim and a light-gray lower dash.

Likewise, a subtle center-stack featured a rectangular display screen that you will get to know well, mainly because the pads to tune the stereo are on the screen. Thanks for the distraction, Honda.

The system also offered Apple CarPlay and Android Auto integration, while a horizontal panel beneath the screen contained buttons for climate control.

Rather than a shifter protruding from the Pilot’s broad console, pushbuttons on the console select the gears –an increasingly common approach for Honda and Acura.

Also, if you’re not too busy texting, you can charge most cellphones on a pad at the front of the console while the soccer team enjoys Blu-Ray/DVD videos with wireless headsets – if they’re not already watching them on their tablet-thingies.

However, most of the cush inside was provided by good-looking light-gray seats, with the second row offering only decent leg- and head-room.

Reserve the third row of seats for kids or somewhat intoxicated adults.

My well-equipped Pilot Elite didn’t come with a single option, incidentally. The new Pilot should look just fine plying the streets of leafy suburbs. I have to admit, though, that I wasn’t as impressed with it as I was with the new Odyssey minivan and Accord sedan.

Thousands of new Pilot-buyers would likely disagree – and that’s all that really matters. 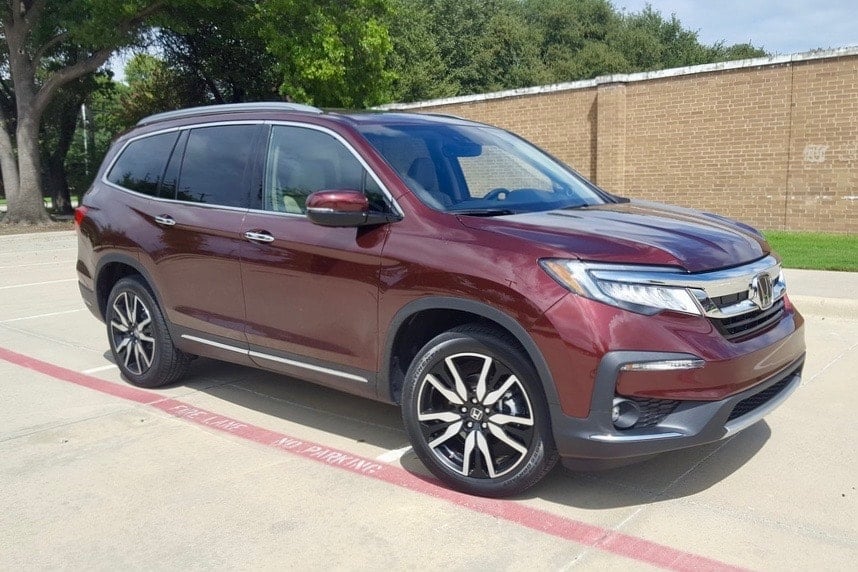 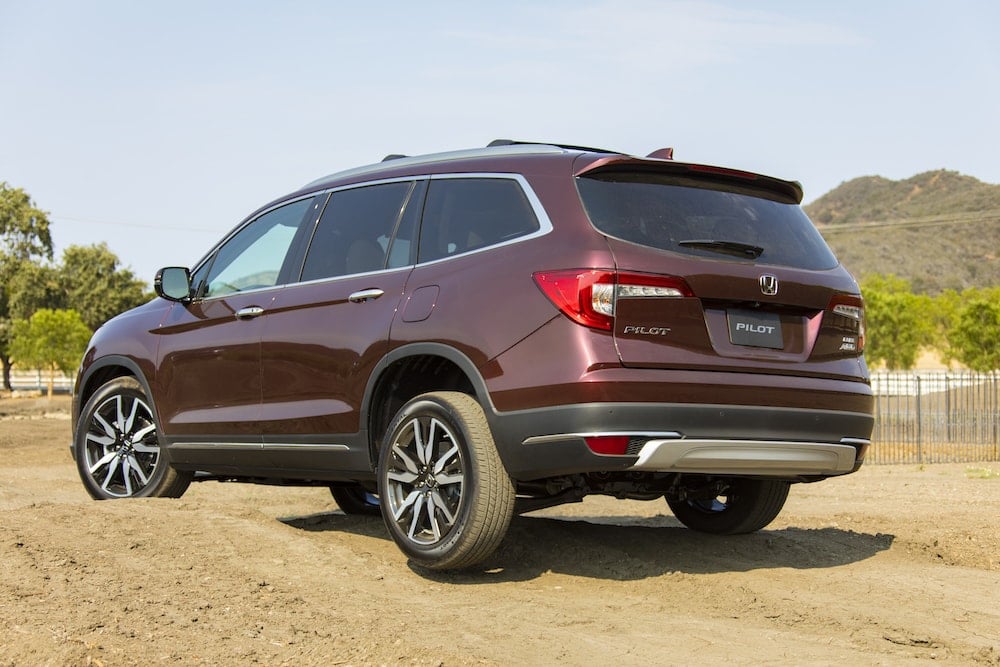 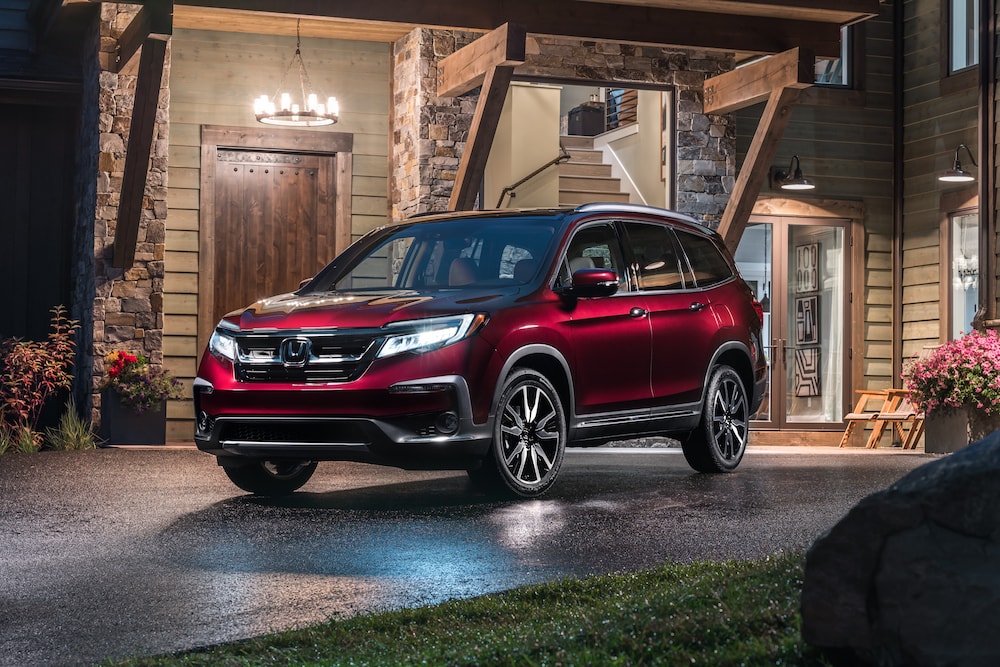 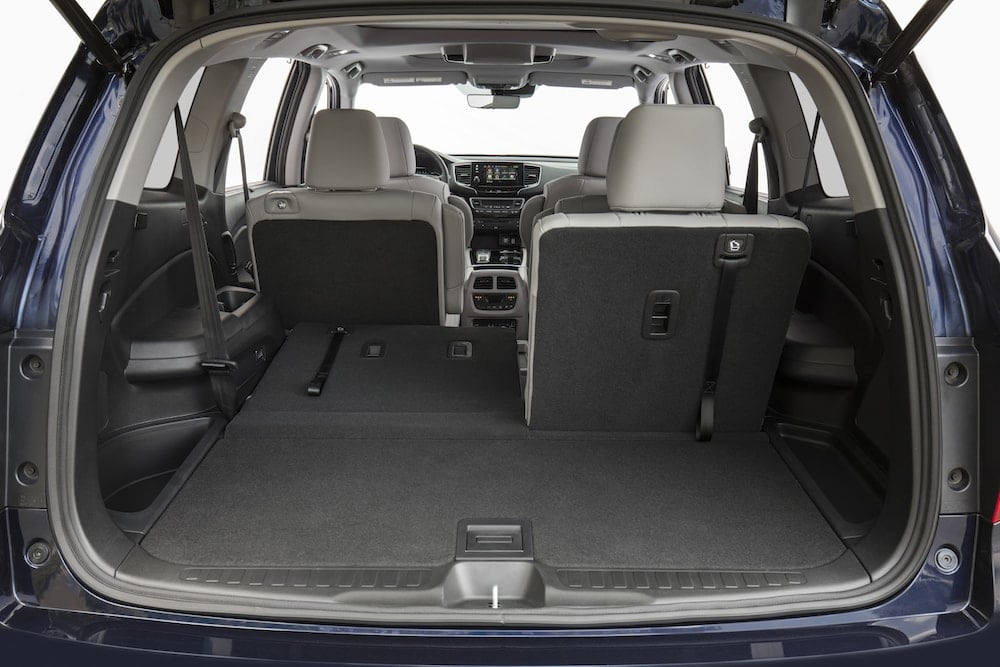 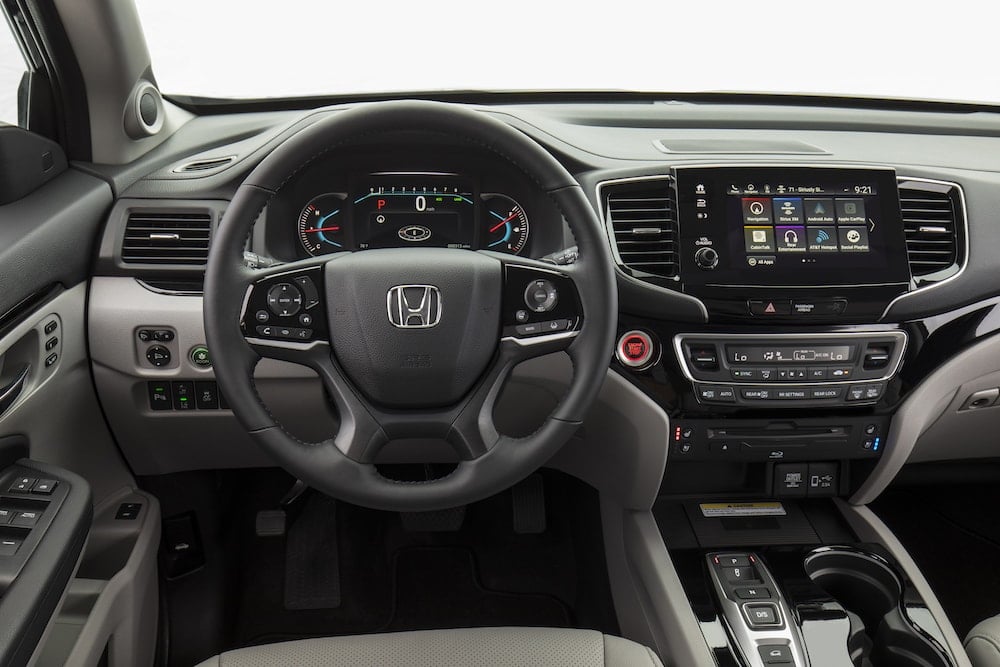 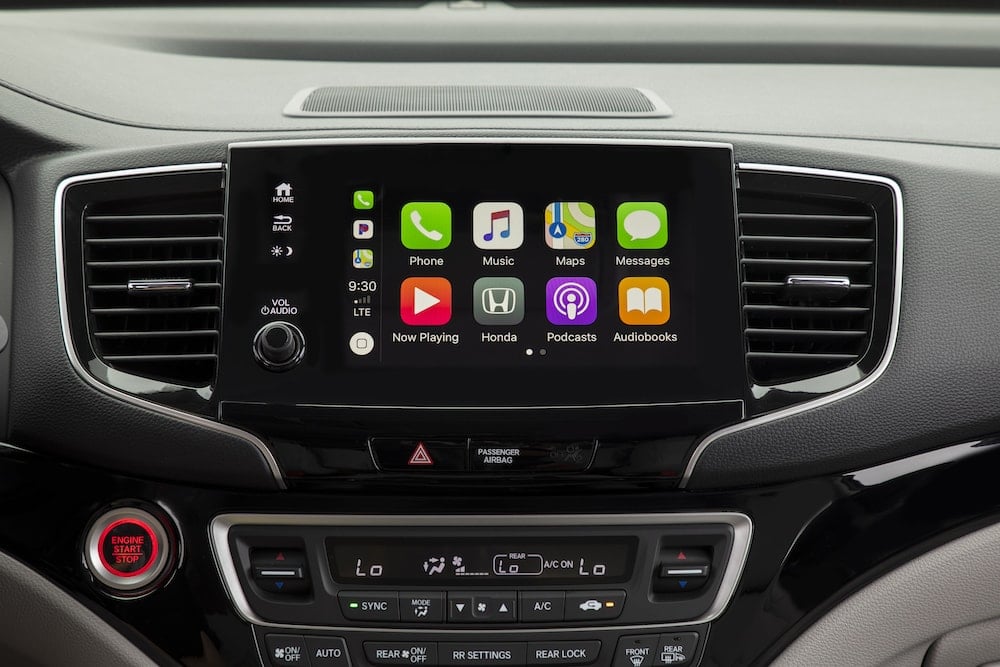 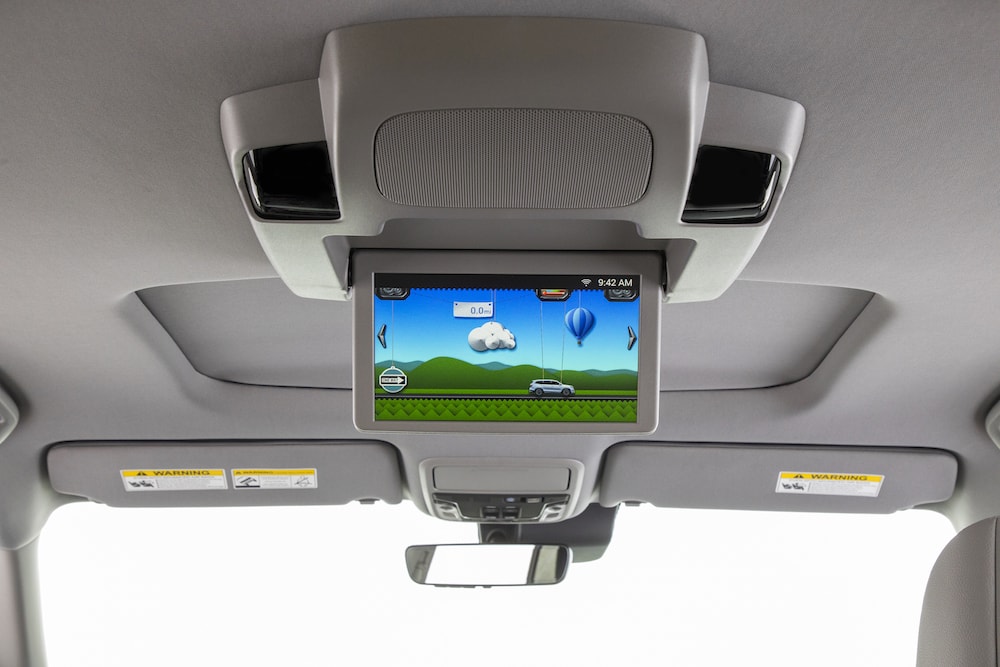 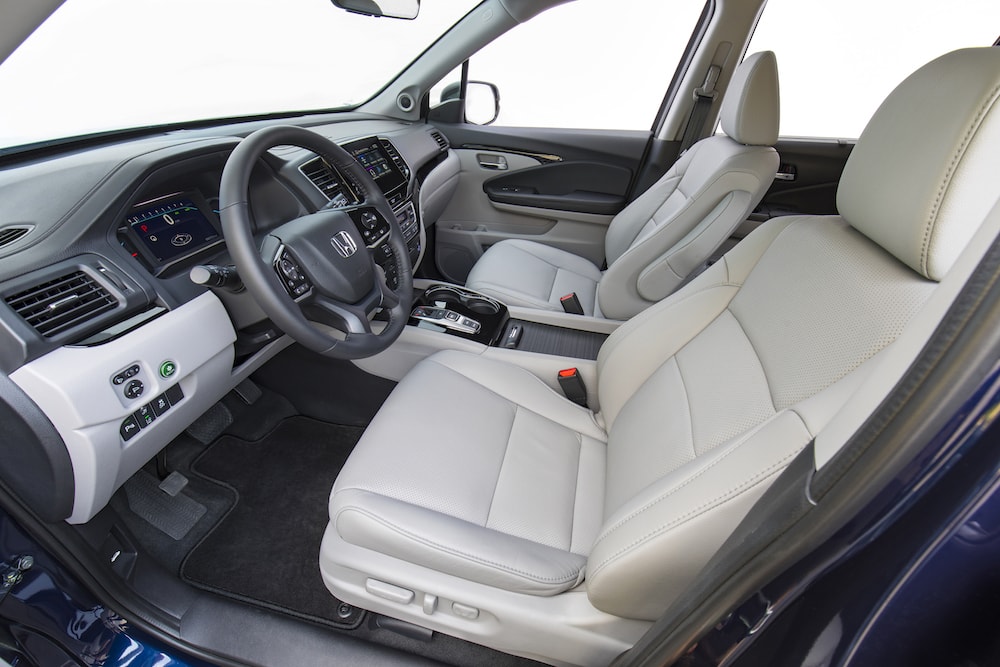 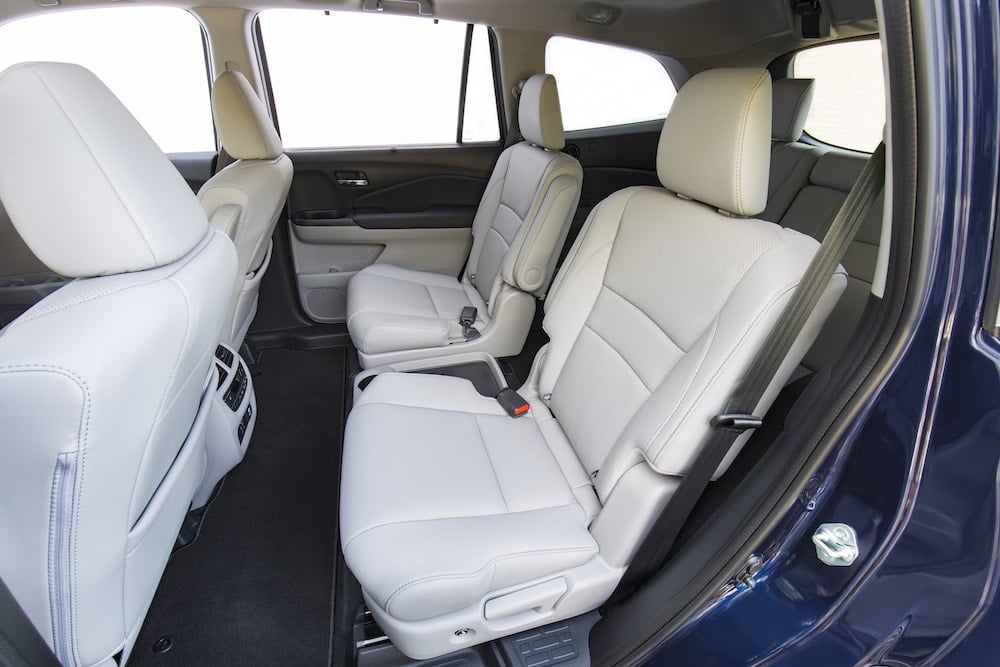