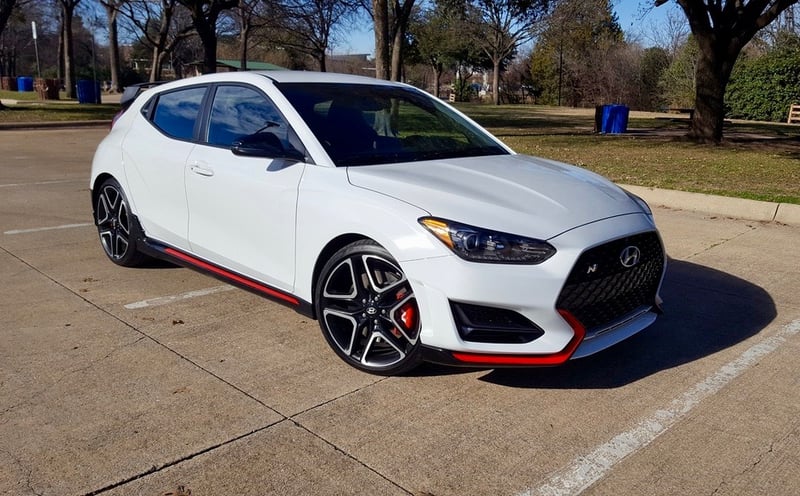 Hot hatchbacks – my favorite angry compacts -- tend to get shaded these days by cute crossovers with Starbucks looks.

I mean, who needs horsepower and handling when you can get cargo-space for your golden retrievers, carbon-fiber bicycles and digital devices – and still style at the cafes.

Fortunately, Hyundai didn’t get the e-mail about horsepower and cross-dressing – uh, I mean crossovers.

Here’s where it gets a bit strange: Hyundai opted to take the eccentric, front-wheel-drive Veloster hatchback and transform it from Venice Beach cruiser to credible two-lane brawler. OK.

I quit doubting that decision after about an hour with the 2019 Hyundai Veloster N, a taut, snarly coupe that lands squarely between the more refined Volkswagen GTI and brawnier Honda Civic Type R.

Much to my surprise, it is an impressive first effort from a company not known for high-performance haulers.

In fact, if I had to choose one of those three hot-hatches, I might select the Veloster over the Civic Type R simply because the wildly excessive R looks like it just veered off the set of Fast and Furious – and I don’t have the right clothes to dress for it.

You may recall, though, that the Veloster once flashed its own peculiarities.

No more. Its goofy, heavily sculpted wheel-openings and other exaggerated lines are gone now, replaced by smoother, slightly muscular sides with powerful flares over the wheels.

A mandatory big blacked-out grille dominated the front of my white N, flanked by bold, stylized headlamps that beamed with appropriate scowl.

Moreover, a slick band of red trim at the base of the grille matched similar trim down low on the body, as well as red brake calipers behind the N’s 19-inch wheels.

Meaty 235/35 tires added even more attitude, as did the N’s sloping, chopped-looking top.

About the only feature I didn’t like was a strange polished black spoiler at the top of the rear window, which appeared to be receiving gamma rays from deep space, but that minor quibble was mostly offset by a convenient, unobtrusive third door on the passenger side of the N that gave the little racer a real touch of convenience.

Even better, the front-wheel-drive coupe is only available with a real-deal six-speed manual transmission.

I never detected any torque-steer, but the engine could spin the tires briefly in second gear if I nudged the throttle too aggressively – whoops – while exiting a corner.

Zero-to 60-mph pops up in a relatively swift 5.9 seconds, according to Motor Trend, though the car felt faster than that.

It also was reasonably frugal for something with hot-hatch horsepower, rated at 22-miles per gallon in the city.

However, the N’s steering – a critical element in a sports coupe -- seemed somewhat thick, but was quick and ably assisted by a stiff suspension that kept the body flat and stable in fast corners.

Of course, the suspension also imposed a fairly intense ride – springy over bumps and kind of fidgety and anxious on city streets.

Considering how the low-slung coupe happily inhaled pavement, though, I didn’t particularly mind.

Likewise, I didn’t expect luxury from the black interior in my N, but, hey, it was kind of interesting. (The N I had recently was a pre-production model and lacked a window-sticker, but Hyundai has since announced a base price for the performance model of $29,885.)

A deep dashboard in textured plastic, for example, dropped abruptly down onto a second tier dominated by a medium-sized display screen.

Unlike many Hyundais with their garish center-stacks, the Veloster relied on simple, clean horizontal panels beneath the screen with buttons and knobs for the audio and climate-control systems.

More plastic awaits you on the door panels, but at least it was the same textured material as the dash, while black cloth seats with light-blue seatbelts featured decent bolsters and grippy quilted centers.

Leg- and head room in the minimalist back seat felt quite tight, so make sure all of your friends are short.

Though not as refined as the excellent Volkswagen Golf GTI nor as fast as the rowdy Civic Type R, the N fully lives up to its high-performance billing – and still looks pretty darn good basking in the sun at Starbucks. 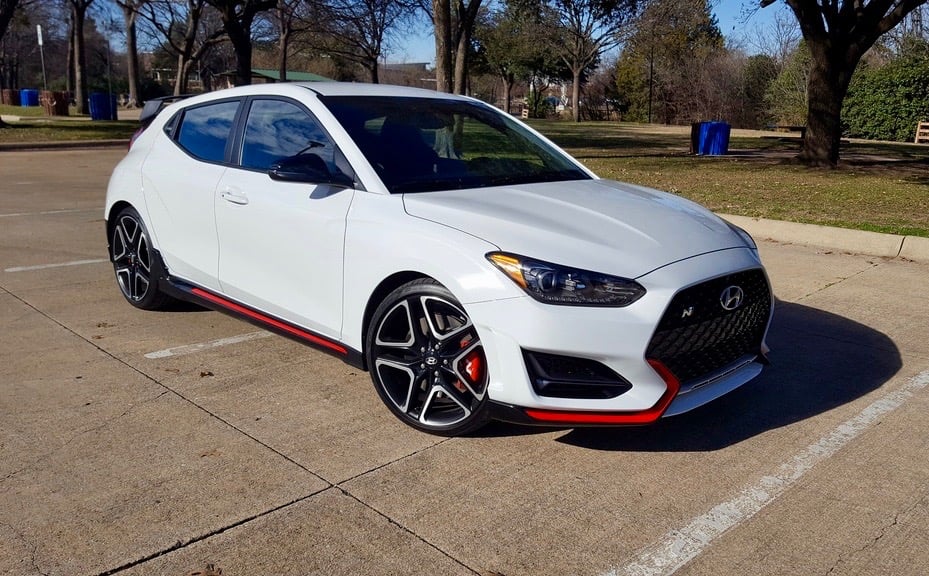 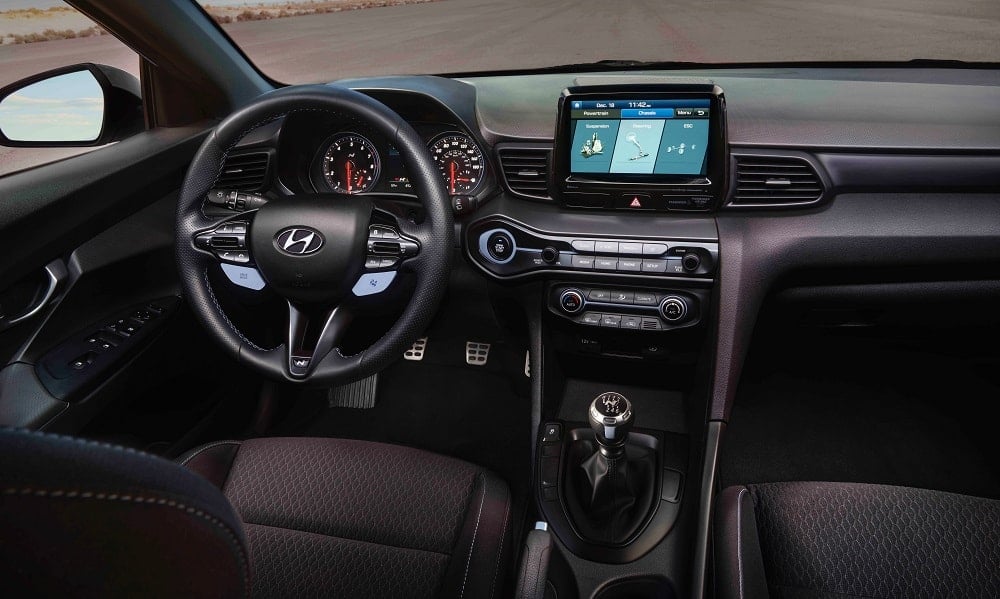 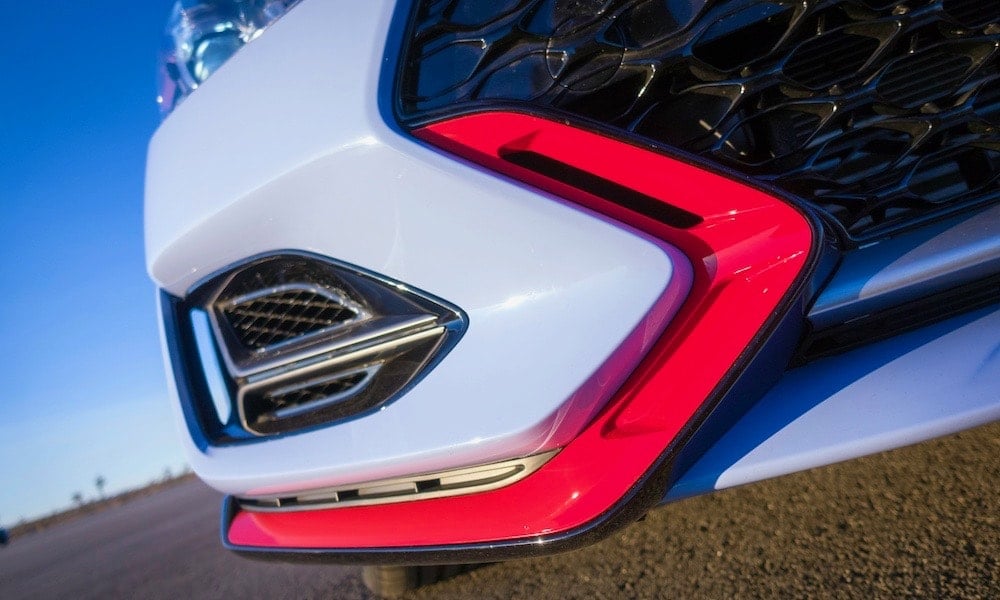 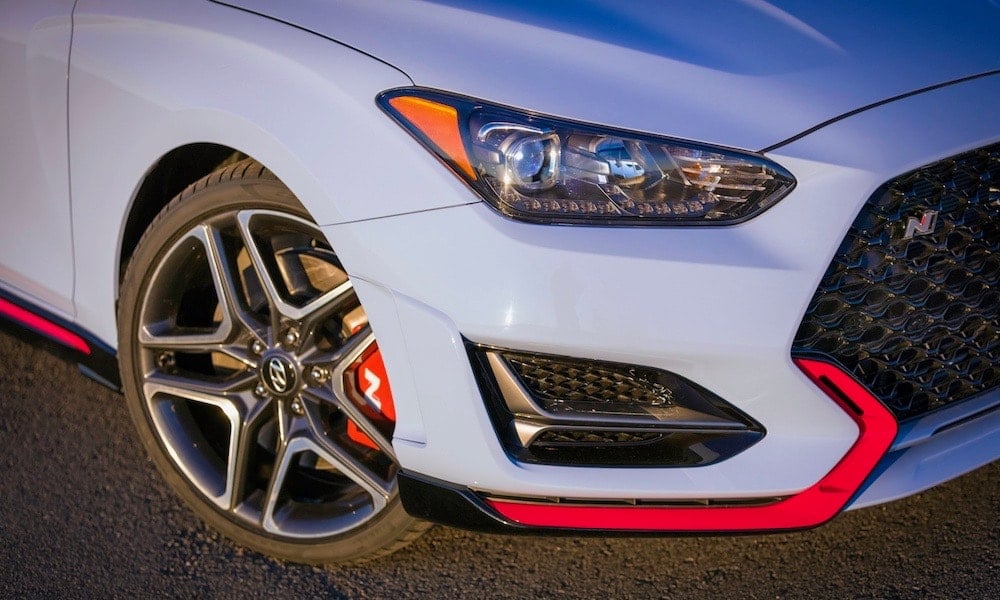 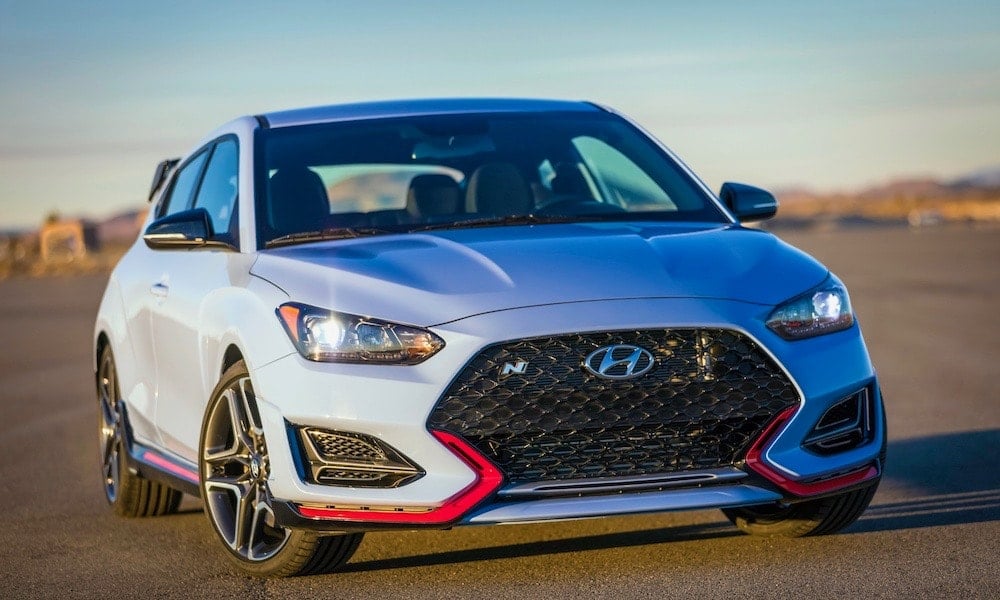 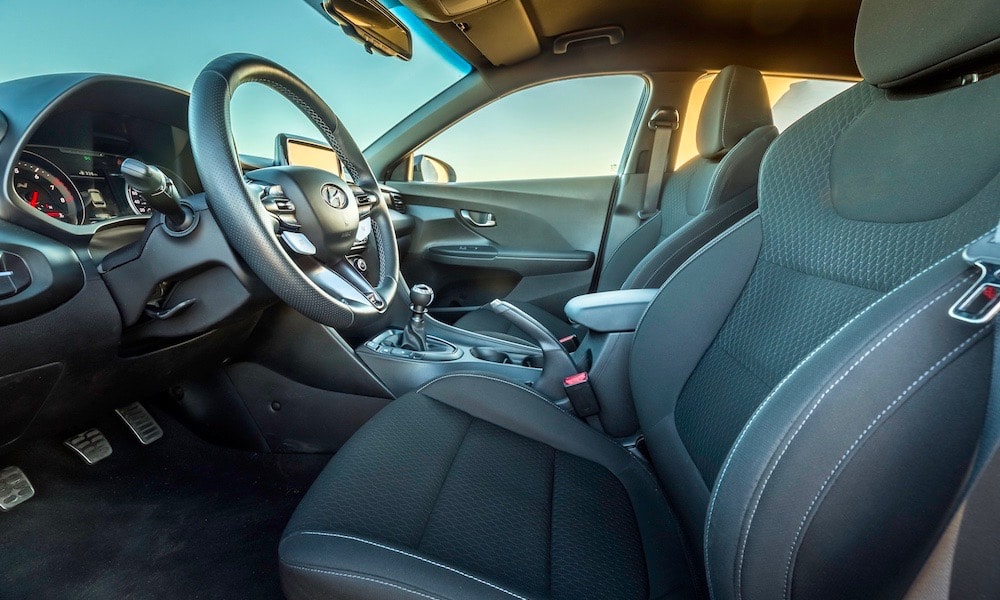 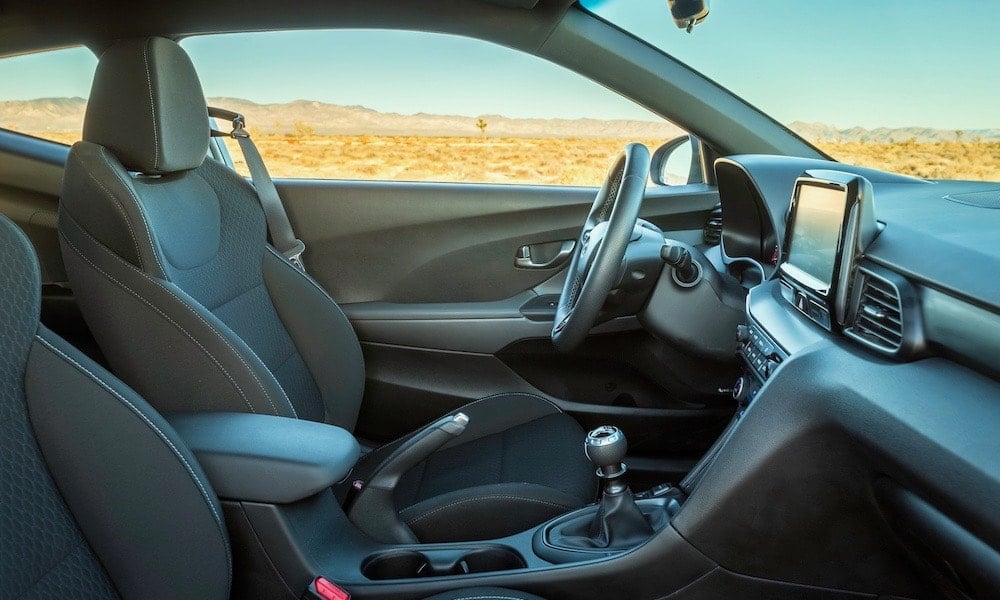 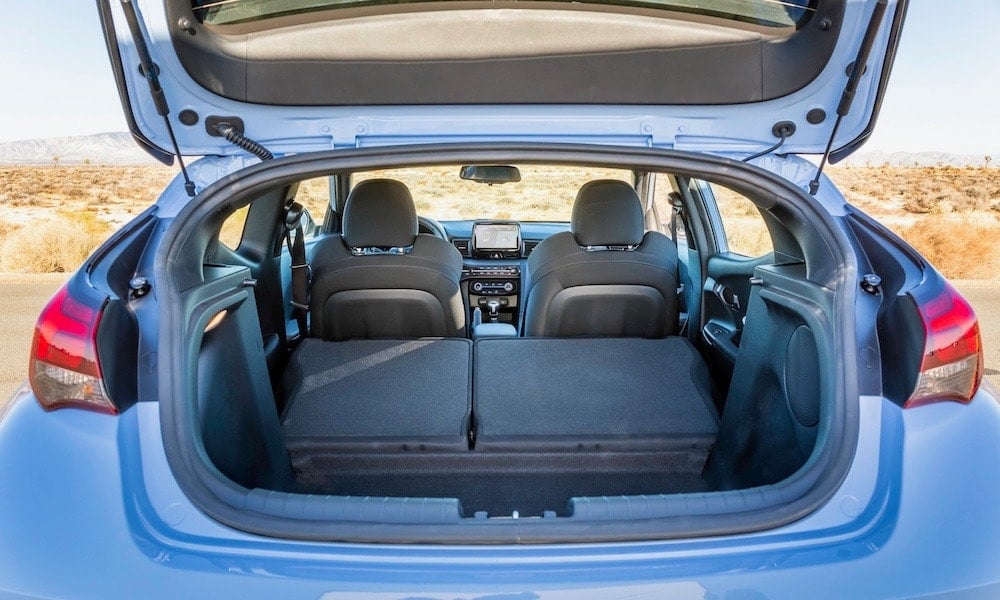 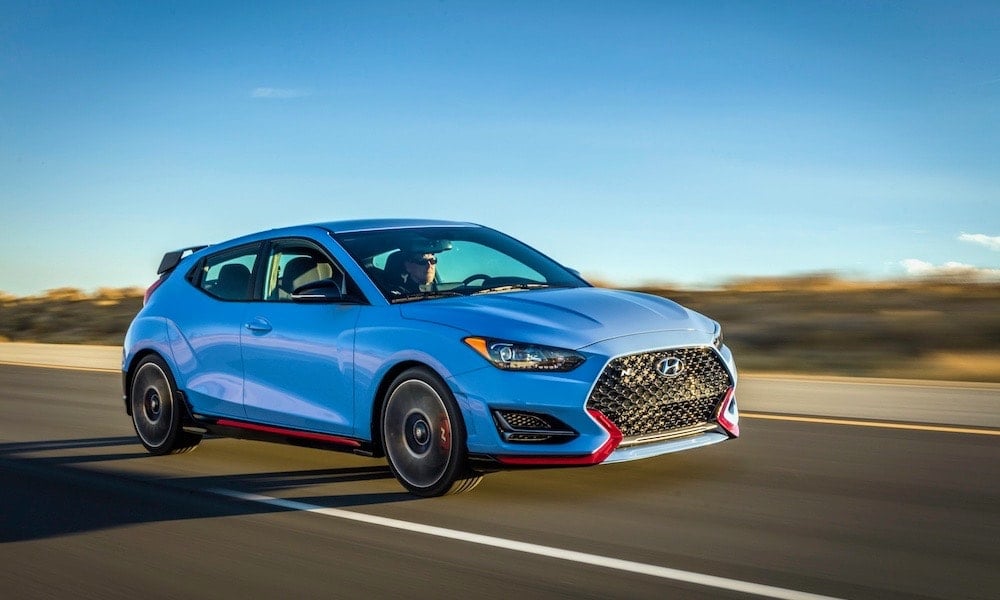 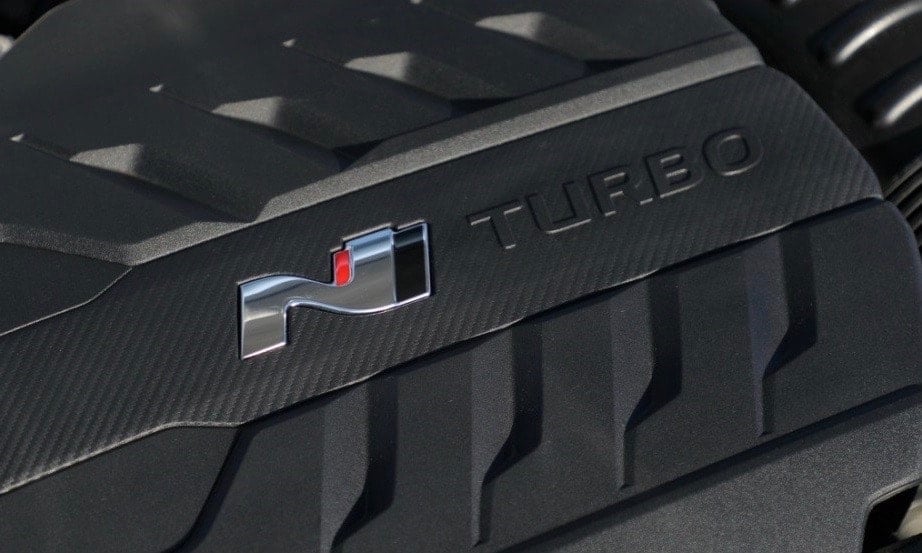 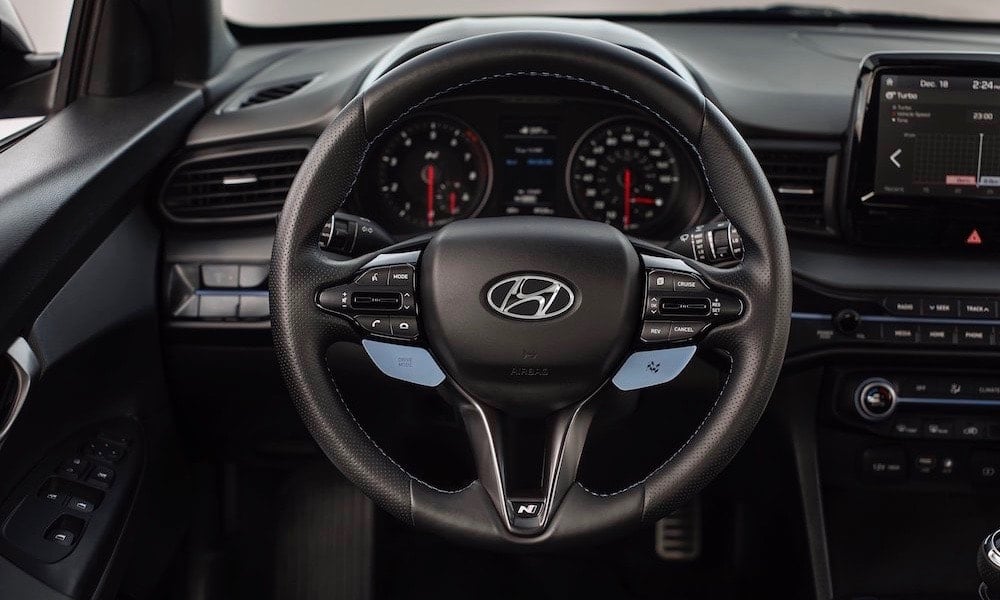