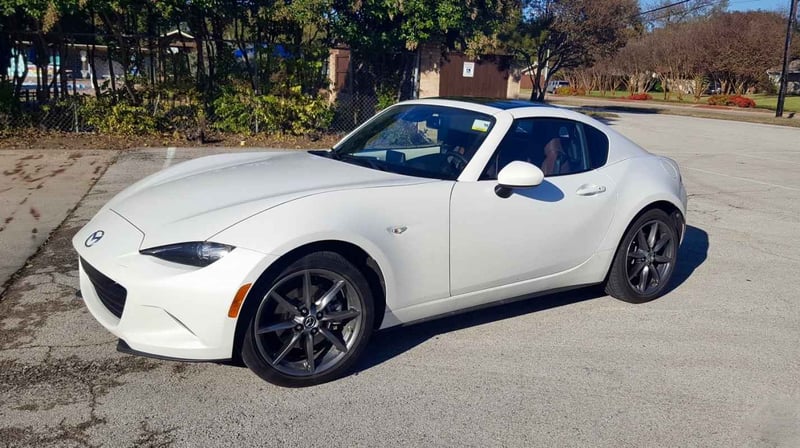 Every time I get a convertible, it arrives on a day so cold I can chill beer in my front yard – and call it urban art.

This time, the 2019 Mazda MX-5 Miata that arrived at Chateau Box earlier this year provided a delightful twist to my bad convertible karma.

As a Touring RF model, it sported a retractable hardtop that not only looked good, it sealed the interior tightly on beer-in-the-yard days and lowered in seconds when it suddenly got warmer an hour later. (Hey, this is Texas.)

Don’t get me wrong: I love convertibles, particularly light, taut, tightly tuned sportsters like the Miata.

Give me bugs in my teeth, wind in what’s left of my hair and the crisp morning scent of burned hydrocarbons in the urban air.

Just don’t heap them on me every day, and if I’m going to commit to a tiny convertible as my daily-driver, I’d rather not live with a canvas top that pops and snaps.

Heck, the Miata RF is like an exotic significant-other who can do house repairs. Can I hold the ladder for you, dear?

Sadly, the sleek new Miata – which Mazda persists in calling the MX-5 – looks so familiar that people barely notice it in these truck-crazed days.

Though a little larger with a few new aggressive styling tweaks, the Miata keeps the same long-hood, short-trunk profile it has had since 1989.

But the long, slightly curved hood on my white Miata was embellished by mysterious headlamps up front that looked like very intense slits.

While the sides remain smooth with a subtle muscular roll in them, the wheel-wells flared out, adding to the Miata’s great Mighty Mouse persona.

Moreover, slender horizontal red lights in back wrap around the edge of the fender, joining large round tail lamps.

Even the Miata’s traditionally tiny wheels and tires have grown over the years, with my $36,000 Grand Touring model wearing gray eight-spoke 17-inch wheels wrapped with 205/45 tires.

To be honest, you will likely forget most of that with one push of the roadster’s starter-button.

Miatas always seize you with their engaging driving characteristics, cutting through corners like some exquisitely balanced scalpel, and that road-assassin quality might even be better in the new RF.

Still stuck to the street with a double-wishbone/multilink suspension, the RF gets a much-needed infusion of 26-horsepower for its 2-liter four-cylinder engine, pushing the relatively meek motor up to 181-horsepower.

Lighter pistons and connecting rods, as well as higher-pressure injectors and improved combustion account for most of the additional power – all great hot-rod stuff.

As a result, the rear-wheel-drive Miata feels more flexible and willing, with more surge and response in the mid-range where most of us drive.

If you snap off some quick shifts with the six-speed manual transmission, zero-to- 60 mph takes about 5.5 seconds, according to Car and Driver.

The car still dives hungrily into corners, maintaining a tight, flat, precise line through them at speed.

It also rotates precisely out of corners, benefiting from the Miata’s quick, lively steering – which is still better than many six-figure sports sedans.

The ride, of course, suffers a bit while the handling thrives. My edgy 2,500-pound Miata clomped and hopped around some, which could get tiresome on a really rough road.

Although the interior in the new Miata gains a tiny bit more space and looked great in saddle and black, it still lacks much space for people or things.

Still, when the weather occasionally warmed, I could push one button just above the console and lower the top in seconds.

It would reveal a spare, graceful black dashboard that curved down to a mid-dash formed in brown plastic with a central 7-inch display-screen shaped like an iPad.

The door-panels, meanwhile, offered slick white-plastic tops with padded saddle-colored panels and armrests that contrasted nicely with the car’s black carpet and headliner.

More important, the supportive saddle-colored bucket seats in the Miata offered smooth bolsters and centers that kept me planted where I needed to be – right in front of the car’s small leather-wrapped wheel.

My high-end Miata arrived with only a few options, including a handling package with limited-slip differential and Bilstein shock absorbers ($750); and upgraded interior ($425).

It also had standard safety features such as blind spot monitoring, cross-traffic alert and lane-departure warning.

You won’t find much practicality, though. The glove compartment, for example, is about the size of a cigar box and mounted between the bucket seats.

It doesn’t matter. With the Miata, all you need is another remote, curvy blue highway. 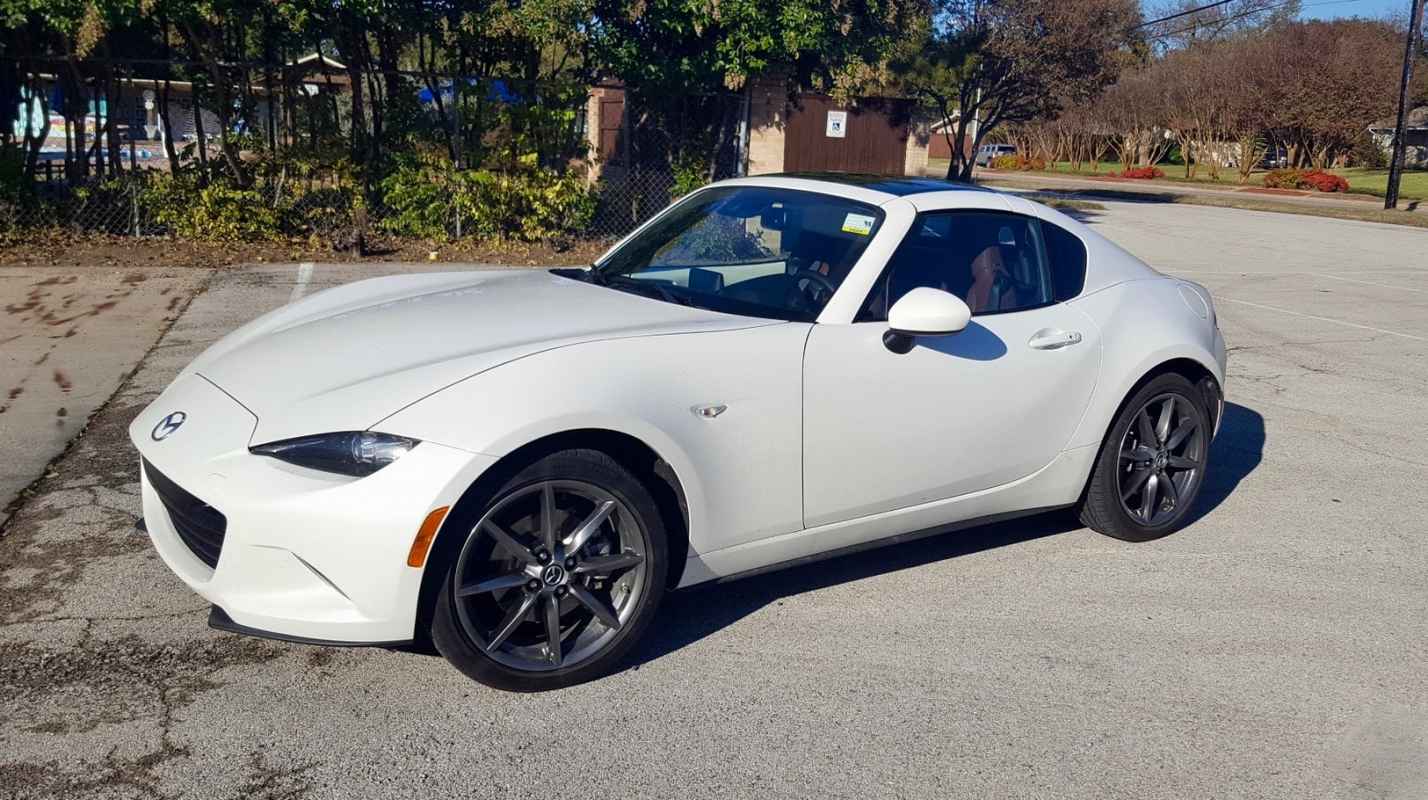 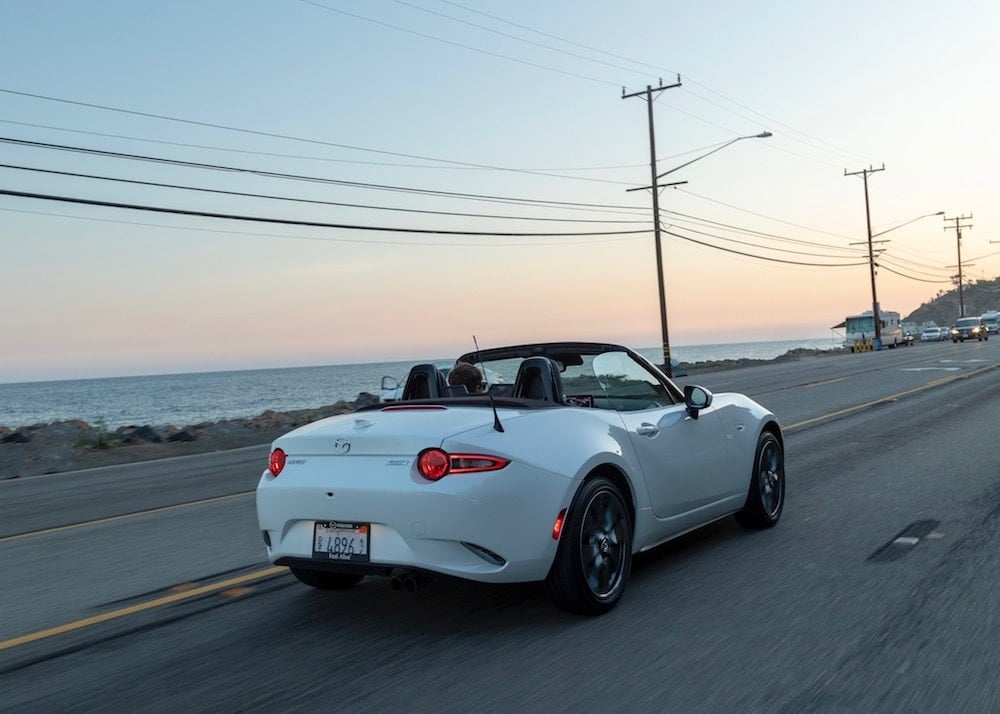 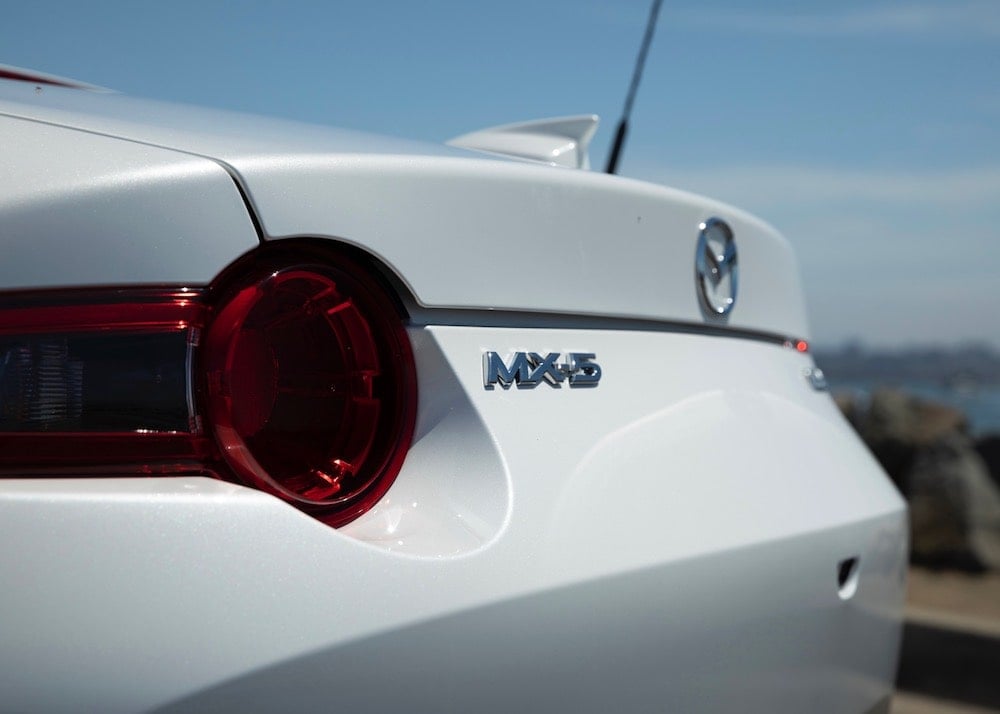 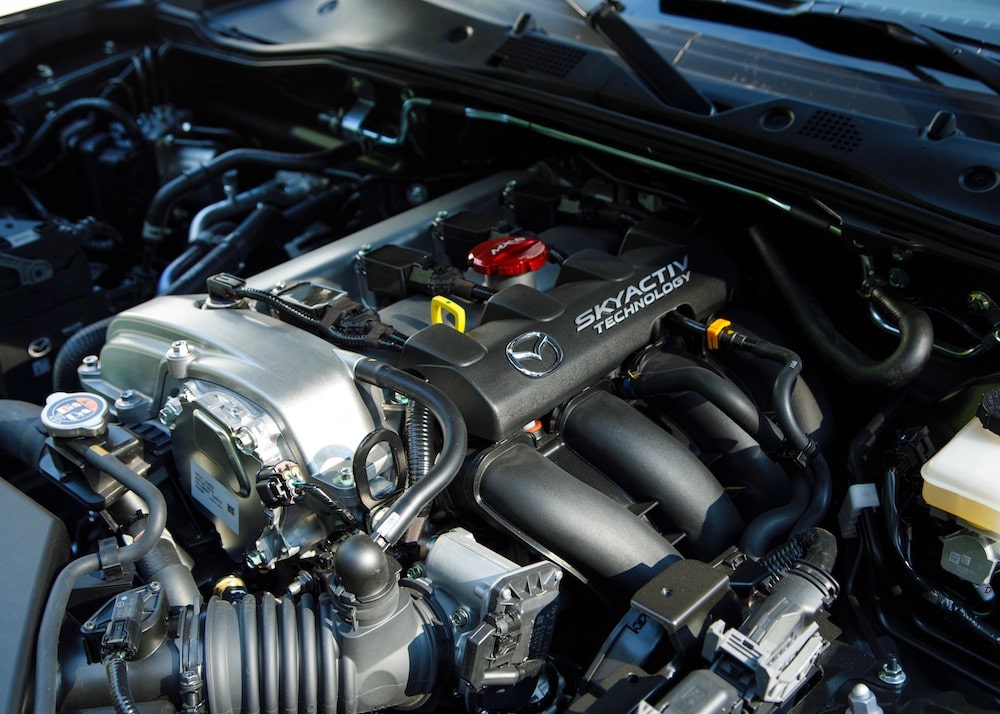 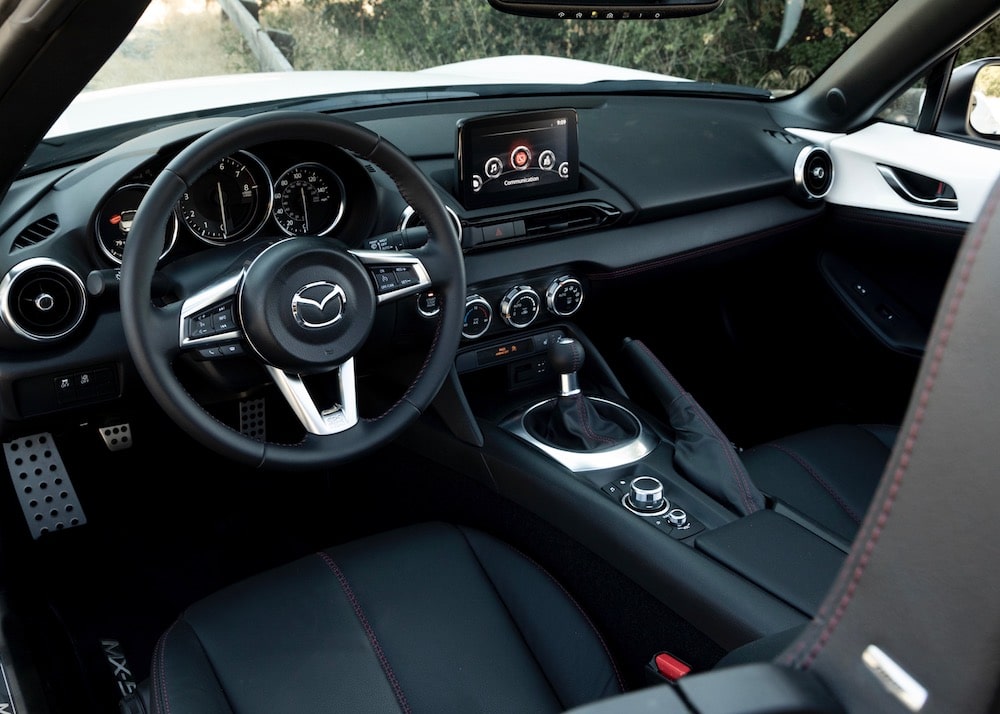 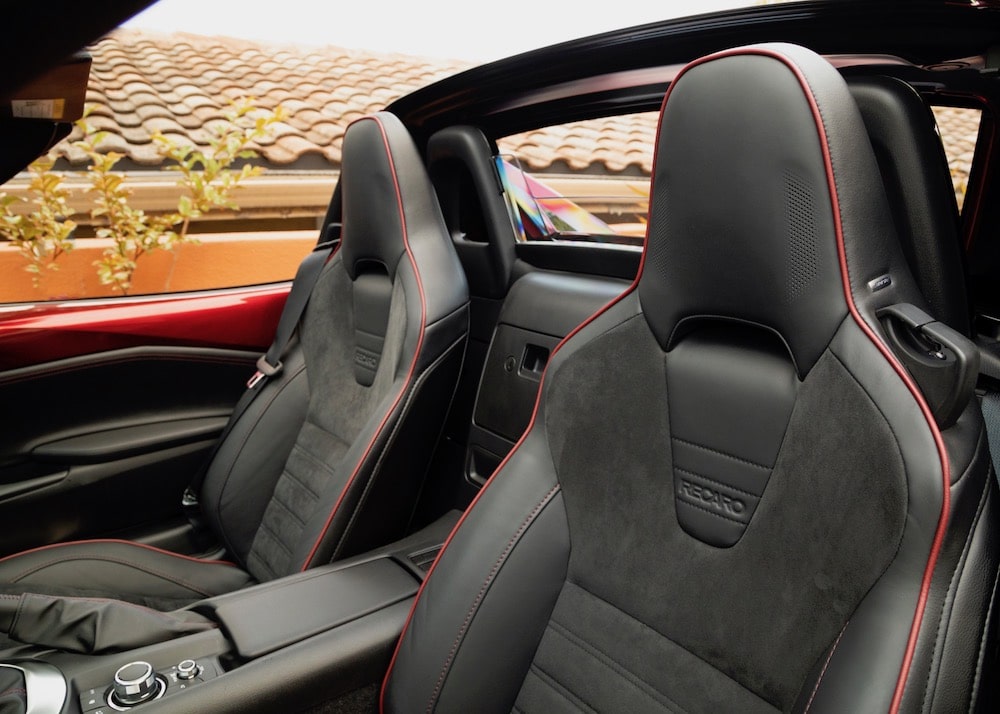 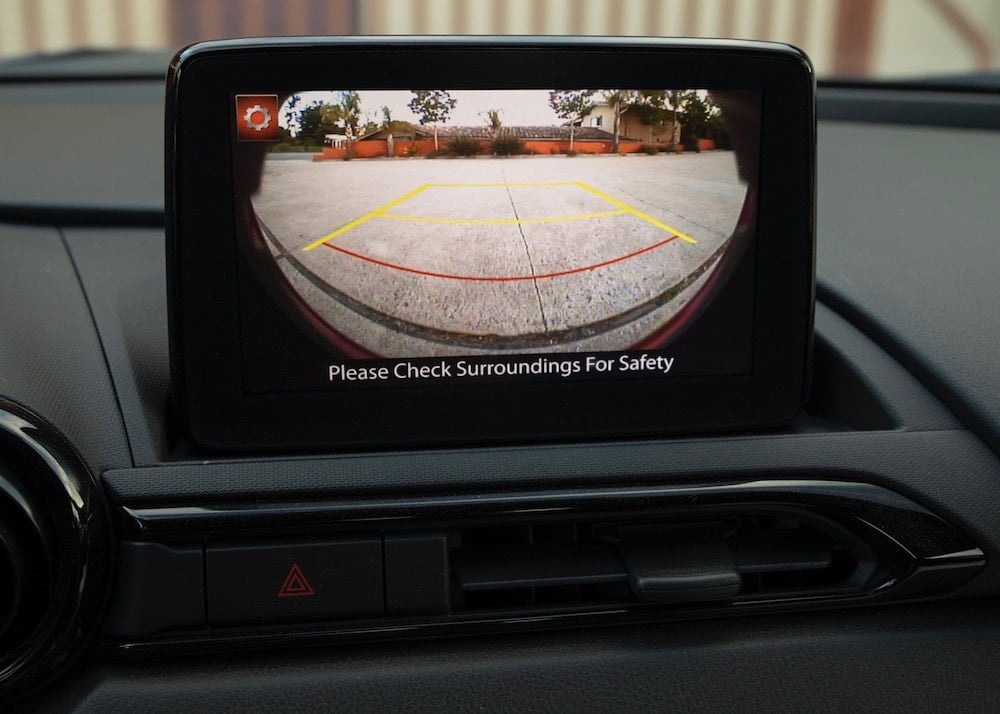 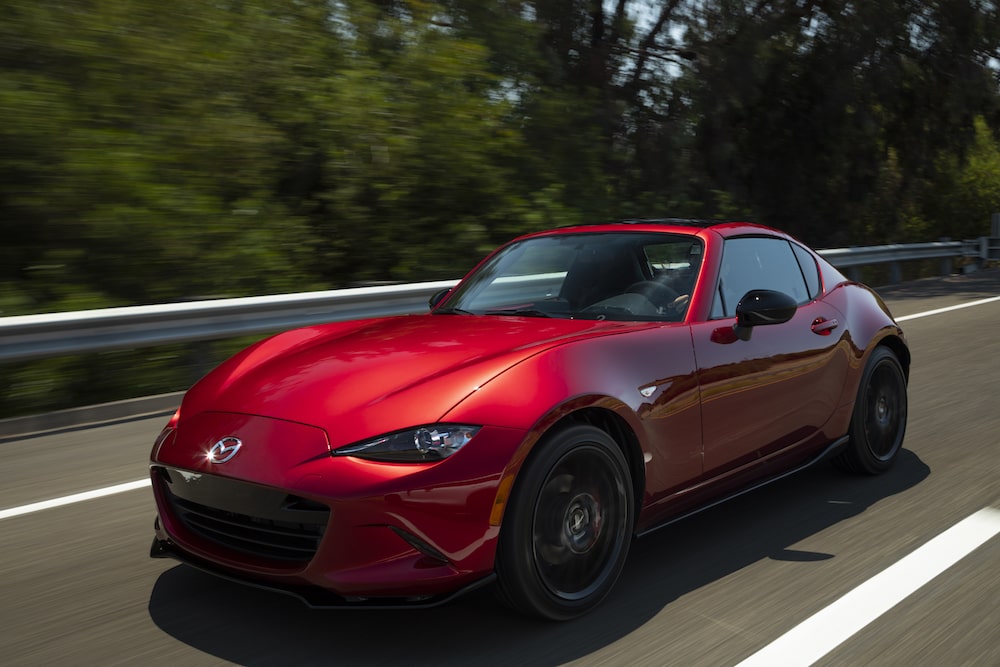 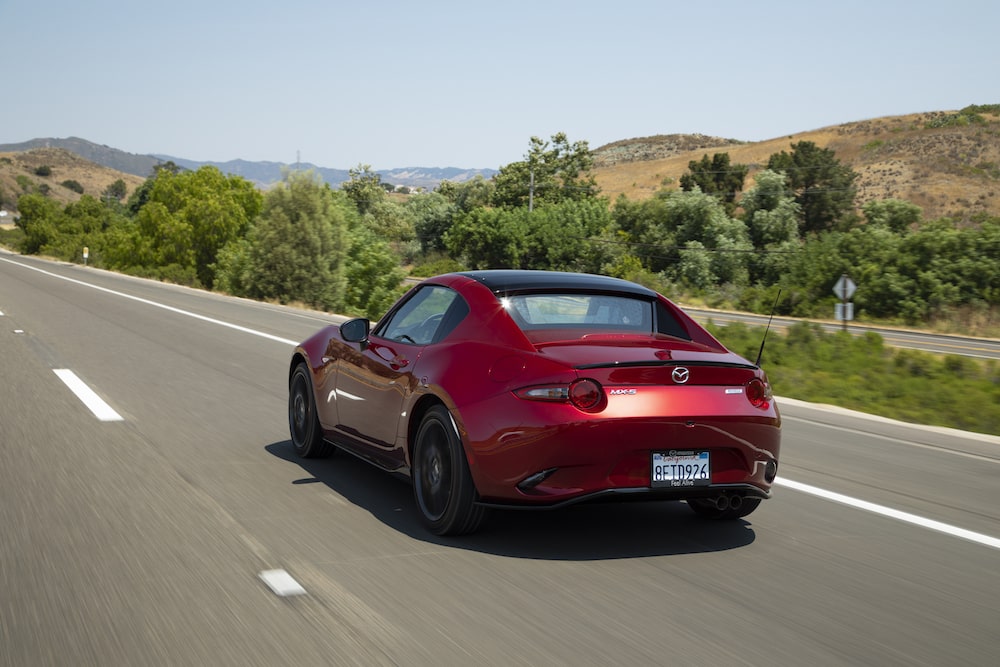