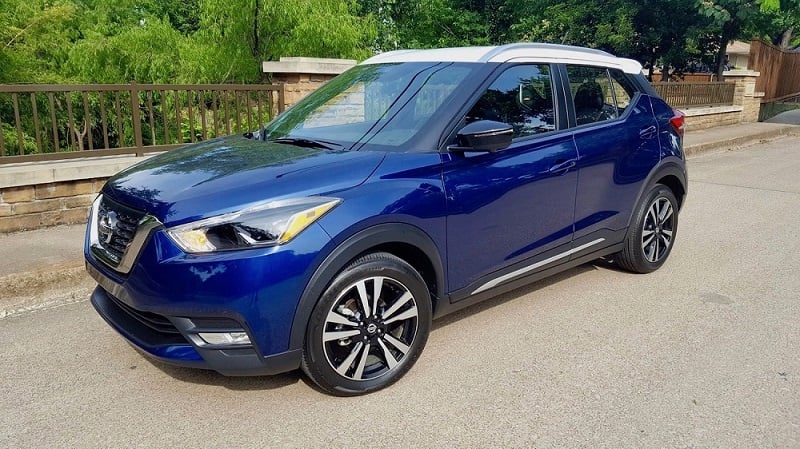 Don’t bother chasing the faded neon and dusty ghosts of Route 66 in this dinky Nissan crossover.

Despite the tantalizing irony – “got my Kicks out on Route 66, dudes” -- the mildly spirited 2019 Nissan Kicks crossover seems better suited to a more sedate environment.

Think of it as the Nissan Smiles.

It won’t ever inspire a Rolling Stones song, but the feel-good Kicks might well make you hum on the way to work, and that’s a move in the right direction these days for struggling Nissan.

As you may know, the subcompact Kicks crossover replaced the strange but sort-of likable Juke last year, offering more room and style but a lot less performance.

Look at it this way, though: You give up a few horsepower and get something that doesn’t resemble a space toad.

In fact, I think the Kicks may be one of Nissan’s better efforts with its decent styling, smile-inducing personality and affordable utility.

My blue-and-white Kicks featured exaggerated, sweeping Nissan headlamps, of course, but they looked mostly at home on either side of a blacked-out grille.

Meanwhile, a longish raised hood gave the lightweight Kicks an oddly substantial feel, while a prominent curving character line on top of the front fender became a sloping line through the door-handles.

One of my favorite elements was the Kicks’ white top, which gave it some vague Range Rover-Mini Cooper flair.

For reasons known only to Nissan, however, the top had one of the automaker’s unfortunate black pillars between the rear body and roof, interrupting the flow.

I tended to focus on the Kicks’ better features, such as its good-looking alloy-and-black 17-inch wheels wrapped with modest 205/55 tires.

Drive the Kicks like a city-car and it’s almost as pleasant as a Mazda – agile, responsive and delightfully light.

Up to about 40 mph, the Kicks’ 1.6-liter four-cylinder engine provided good zip, lunging forward from stops with the promise of decent performance, but with only 125 horsepower to move nearly 2,700 pounds, it was a hollow sort of dating-site promise.

The little surge of torque and power flattened out beyond 40 mph, leaving the Kicks to struggle to 60 mph in a barely adequate 9.7 seconds, according to Car and Driver.

That’s probably not unreasonable for a $23,000 subcompact that gets overall fuel economy of 33 mpg.

Just make sure you get a good, foot-to-the-floor running start when you merge onto densely packed, fast-moving freeways.

Like most Nissans, too, the Kicks’ small engine was tied to a jumpy continuously variable transmission (CVT).

Though the belt-and-pulley CVTs continue to get better, they still sound like wide-open lawn mowers when at full throttle.

However, thanks to a stiff, modern platform, the Kicks turned into corners as eagerly as most compact sedans, remaining mostly stable.

It also rode well, feeling smoother and more compliant at 50 or 60 mph than I had expected.

The steering, though, while fittingly light, was sort of vague and sometimes seemed downright mushy right off center.

Still, compared to the last dreary Nissan subcompact I drove, the Kicks is a big step forward with a bit of spring in that step.

Even slathered in black plastic, the interior in the Kicks had some pop – as well as 25 cubic feet of storage space behind the back seats, more than twice that of the Juke.

A flat upper dashboard, for example, curved gently over the instrument panel, which didn’t include a tachometer – remember, smiles not kicks.

Meanwhile, a mid-dash in smooth, pliable black plastic wrapped around a 7-inch display screen and featured orange stitching at its base.

Although the display screen looked pretty basic, it provided knobs for the audio system’s volume and tuning, while a separate panel beneath it had knobs and tabs for the climate system.

Kudos to Nissan for those – basic, functional and non-distracting.

As you might expect at this level, the Kicks’ door panels were sheets of black plastic with a couple of interesting curves in them and padded armrests.

The black seats, though, looked kind of inviting with sectioned centers and orange stitching, while leg- and head-room in back was a bit tight – like most subcompacts.

My Kicks SR didn’t have any options since most features are standard on it.

Over the last 20 years, once-sporty Nissan – the builder of the Z-car, several early hot-hatches and a popular small pickup – devolved into a commodity brand with laughable styling.

Now, with the restyled and re-engineered Altima sedan and the still-new Kicks, Nissan may be stirring again. 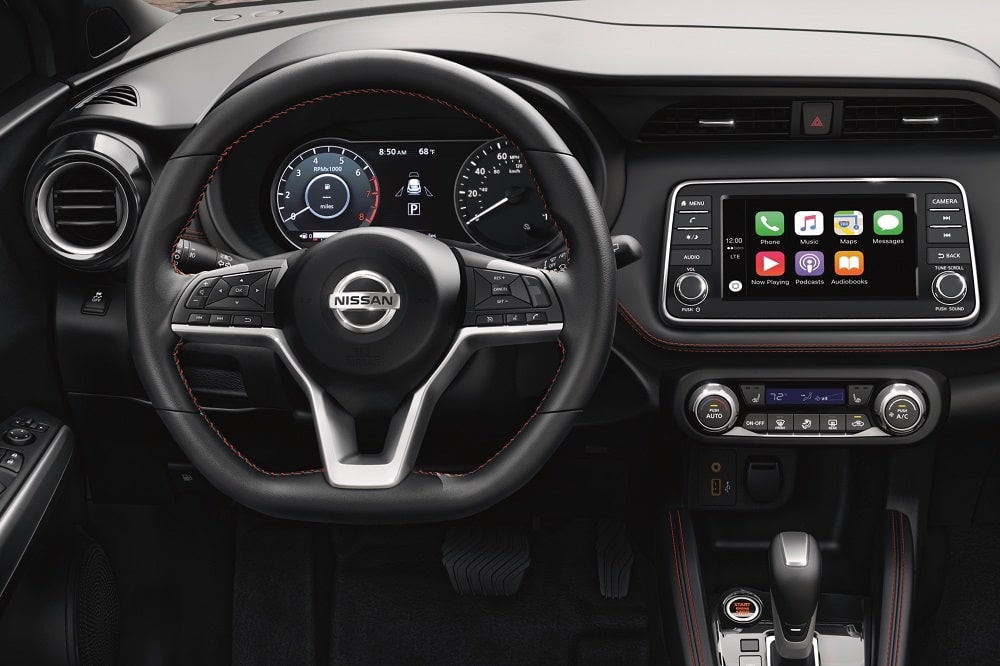 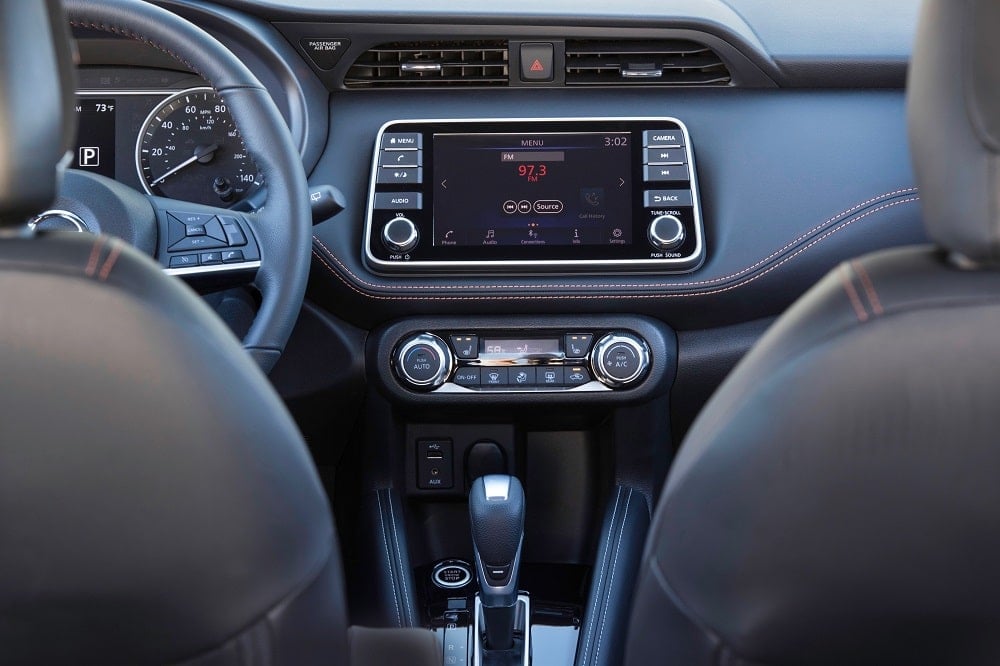 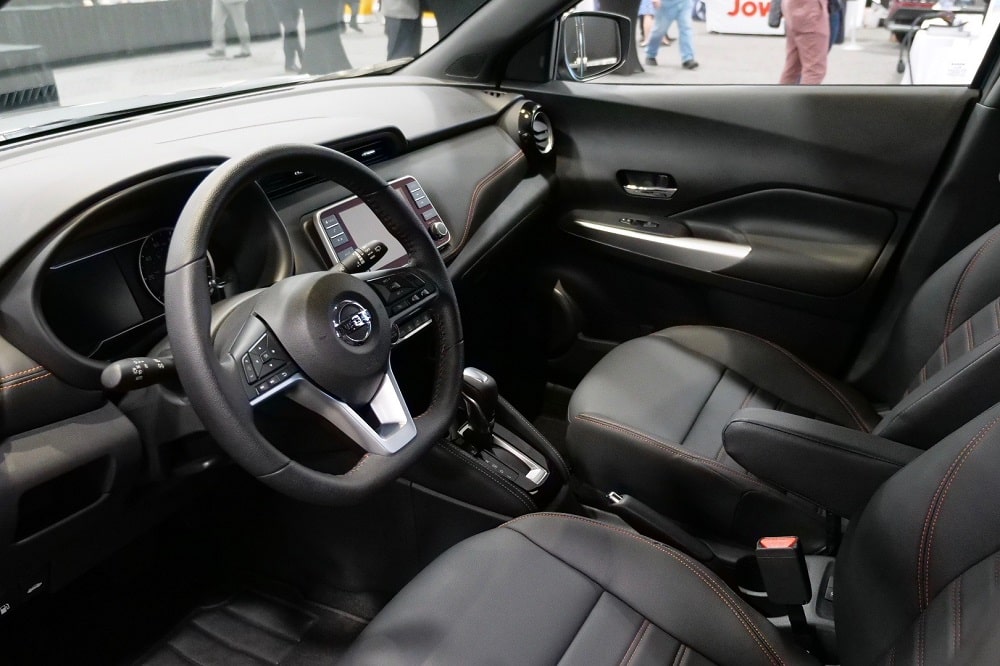