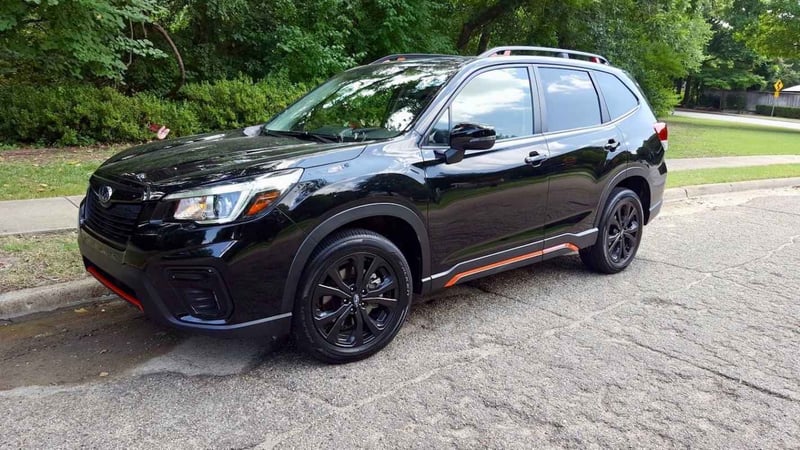 Once again, suburban-hippie Subie – the little brand that can -- saw sales rise last month. It was the 91st consecutive month that Subaru’s sales grew in the U.S., part of a 5 percent overall increase during the first six months of this year.

Apparently, the Japanese automaker didn’t hear that sales in the U.S. auto industry dropped 2.4 percent during the same period.

I mean, who needs a bunch of horsepower or a 10-speed automatic transmission? Just pack your crossovers with grinning golden retrievers.

Actually, the all-new 2019 Subaru Forester Sport I had recently could shine on its own, riding on Subie’s new “Global Platform” and offering tweaked styling as well as standard all-wheel-drive and a few more horses.

Much like last year, my black Forester – which is slightly larger for 2019 -- featured a horizontal blacked-out grille that pushed gently against tame headlamps.

As a Sport model, the Forester flashed lots of orange trim pieces – including a skinny piece beneath the grille -- but no additional horsepower or suspension modifications. Drat.

Meanwhile, a faintly concave hood capped short fenders complemented by a quirky character line that wandered around the door-handles and beneath the rear windows.

Moreover, you’ll find more orange trim on the Forester’s lower body-panel, as well as small pieces on the luggage rack.

I’m sure they will help if you get lost at some chic urban retail strip and can’t find the parking lot, a common problem for those of us who are direction-challenged.

All legitimate compact crossovers – the kind that lug $2,000 tents on summer vacations – must roll on black wheels, and the Forester’s 18-inch spoked versions wore 225/55 tires.

In some ways, though, the Forester wears them well. Like all new Subarus, it sits on the company’s solid new platform, which delivers a fine, confident-feeling ride.

Though not particularly sporting, the Forester still turns into corners crisply with manageable body-lean considering its tallish 68-inch height.

Even the Subie’s horizontally-opposed 2.5-liter four-cylinder engine felt pretty adequate. With direct injection for 2019, it generates 182-horsepower, an increase of 12 from last year.

In addition, the boxer-motor gets overall fuel economy of 29 miles per gallon, which struck me as reasonable for a high-riding five-passenger vehicle with 33 cubic feet of cargo space.

Thanks to the Forester’s continuously variable transmission – a polarizing device that uses a steel belt and two pulleys rather than a real transmission – it jumps smartly away from stops.

With 3,600 pounds to lug, the engine runs out of breath at about 50 mph and flattens, jogging to 60 in a very average 8.5 seconds, according to Car and Driver.

That should be plenty adequate for most urban drivers. However, under acceleration, the new Forester still suffered from the dreaded Subaru Moo – a flat, irritating drone common to all CVTs.

You can avoid it by not driving like me.

With a window-sticker of $31,815, the Forester looked and felt like a value-vehicle, and that theme carried over to the black and gray interior.

While not luxurious, the five-passenger interior was comfortable and functional, featuring a somewhat busy black-plastic dashboard with a hood over the instrument panel and a recessed time/temperature panel near the base of the windshield.

Fairly jolting orange trim around the vents on the dash and shifter-boot matched orange stitching on the edges of the dash and console.

The Forester’s 8-inch display screen was more pleasant to look at, loaded with Apple CarPlay, Android Auto, Aha and Pandora.

Hiding somewhere in there also were blind-spot detection, EyeSight Driver-Assist technology and a DriverFocus system that can supposedly identify signs of driver fatigue or distraction. It may object as well if your shirt clashes with your ancient Madras shorts.

Of course, the back seat provided good leg- and head-room, with plenty of space for the dogs.

My Forester Sport arrived with a $2,045 options package that included blind-spot detection and rear cross-traffic alert; a power rear gate; and a 576-watt Harmon Kardon stereo.

Subaru was already struggling to meet demand for its vehicles when the ’19 Forester arrived, which helped spur a respectable 5 percent jump in sales in June.

If the production-strapped automaker can resolve quality issues related to its heavy demand, the new Forester – a nice-driving compact crossover with a personality – should keep pushing sales up. 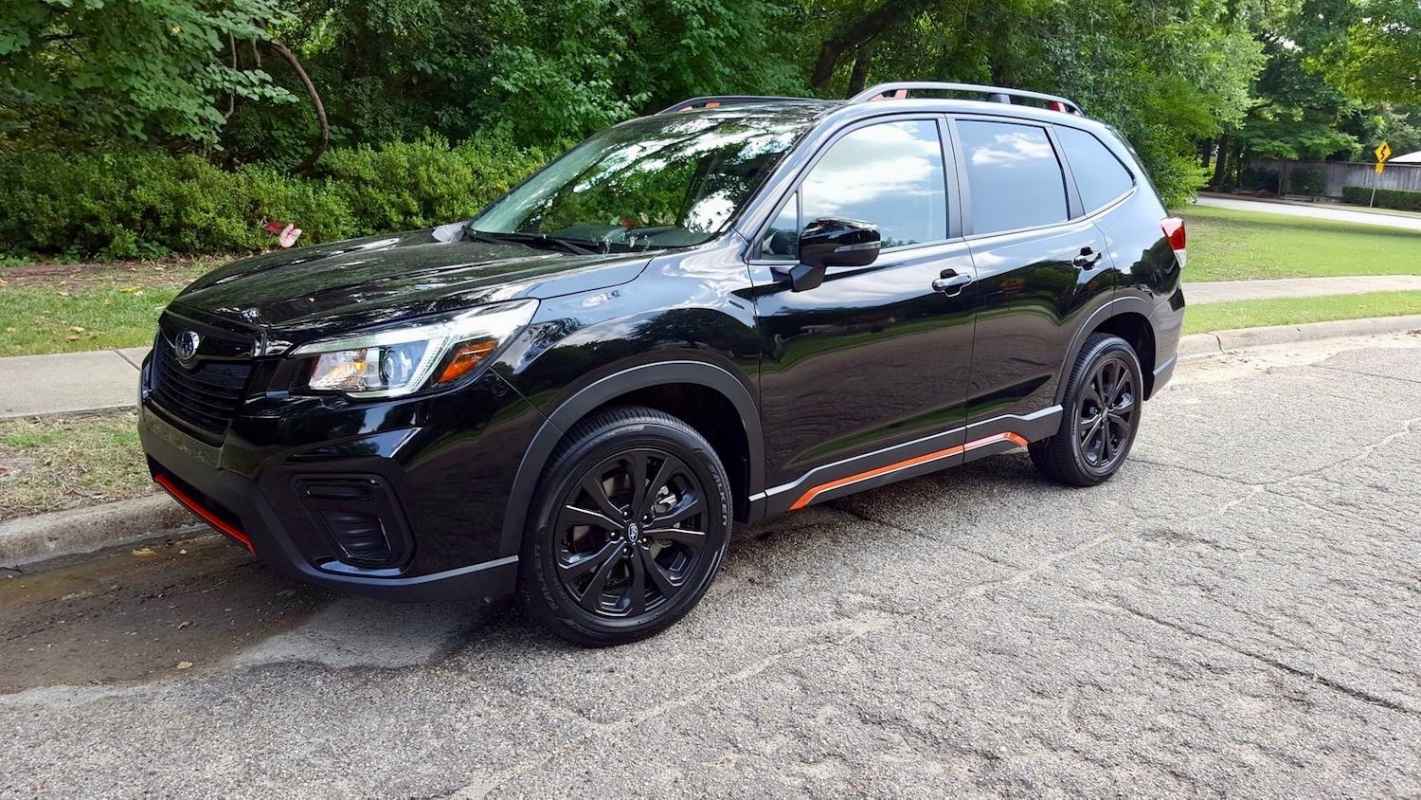 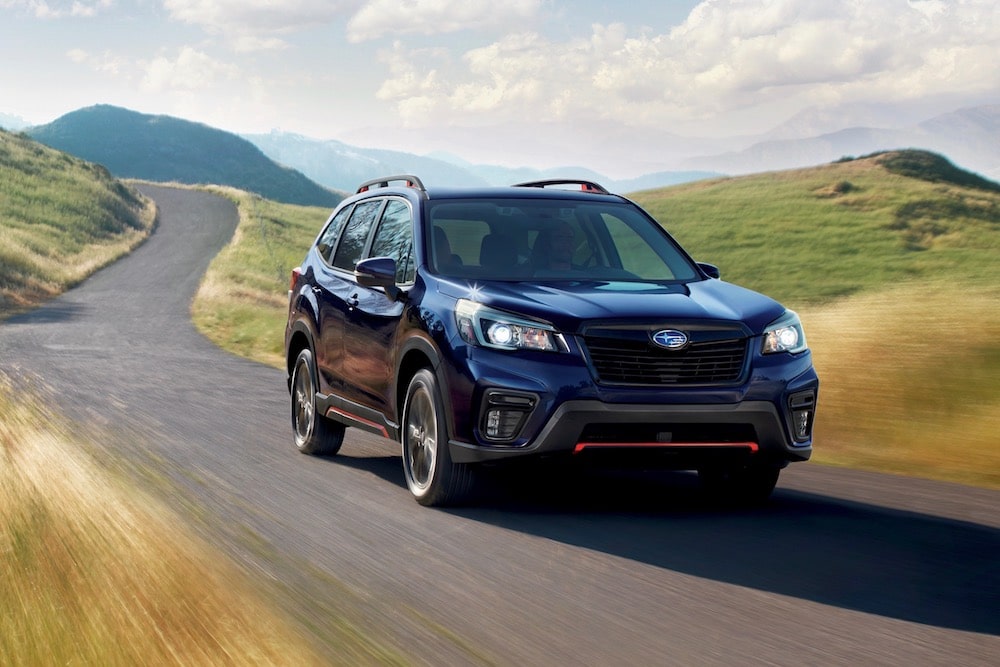 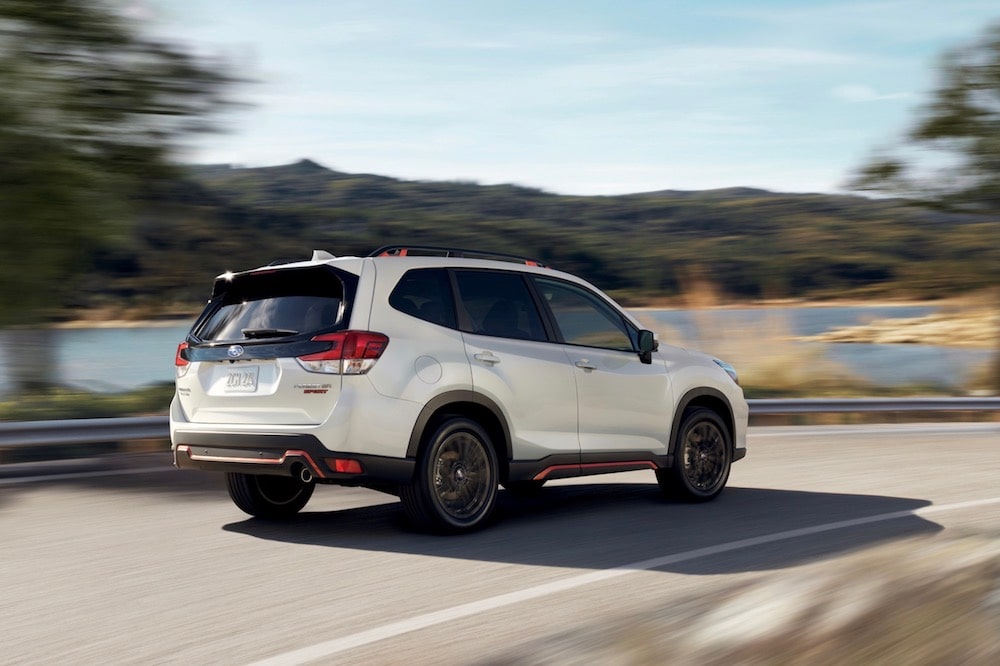 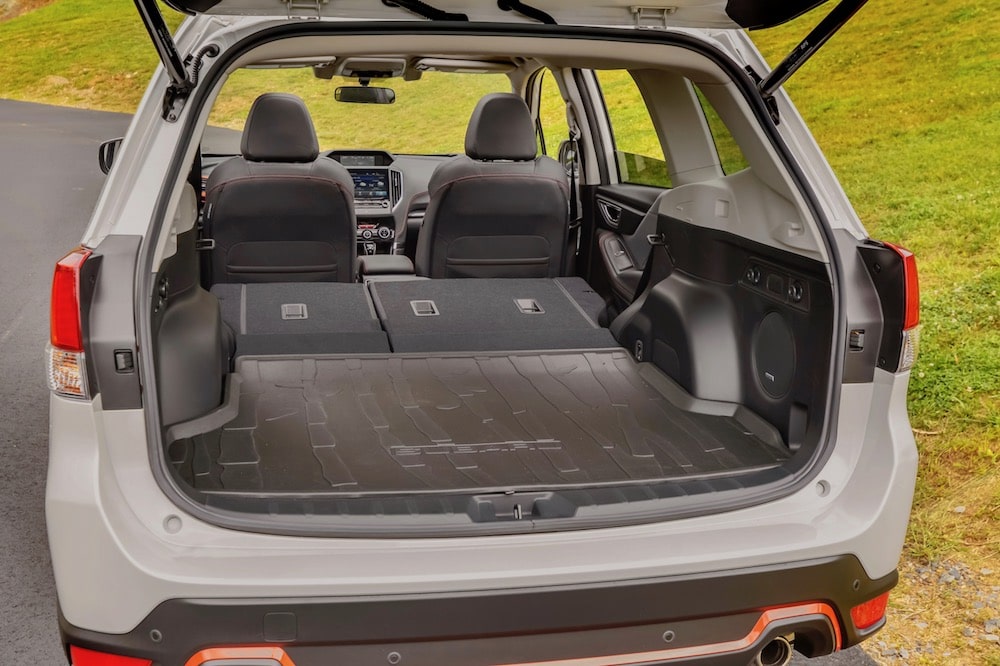 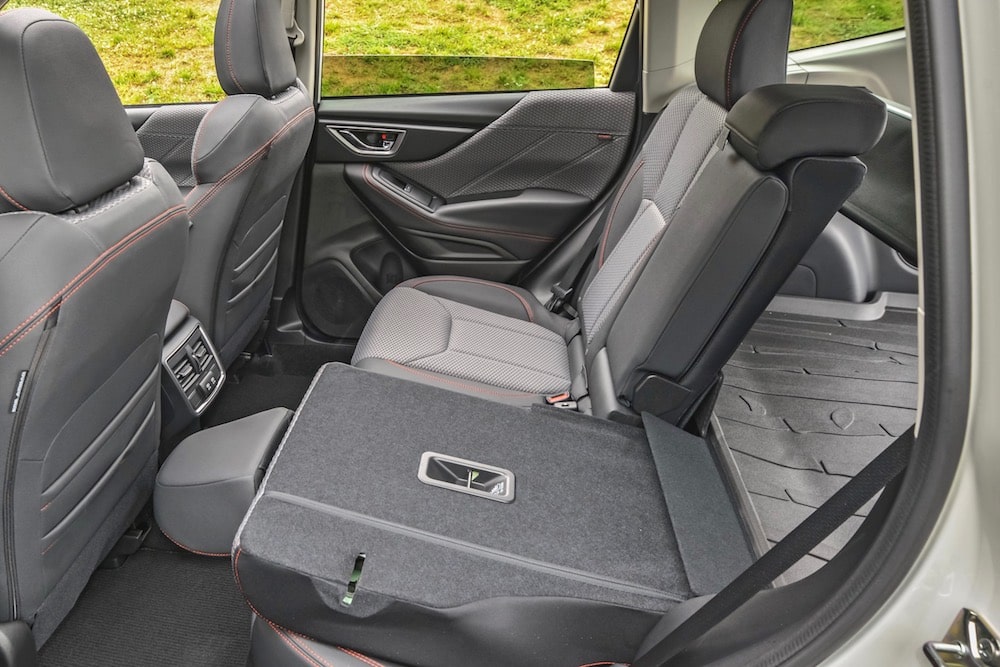 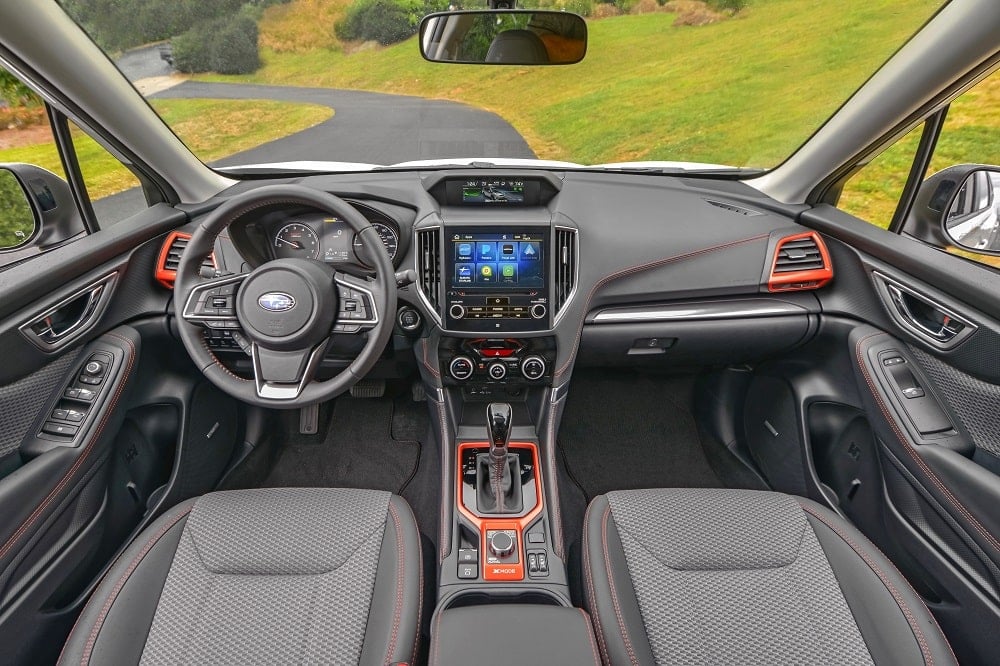 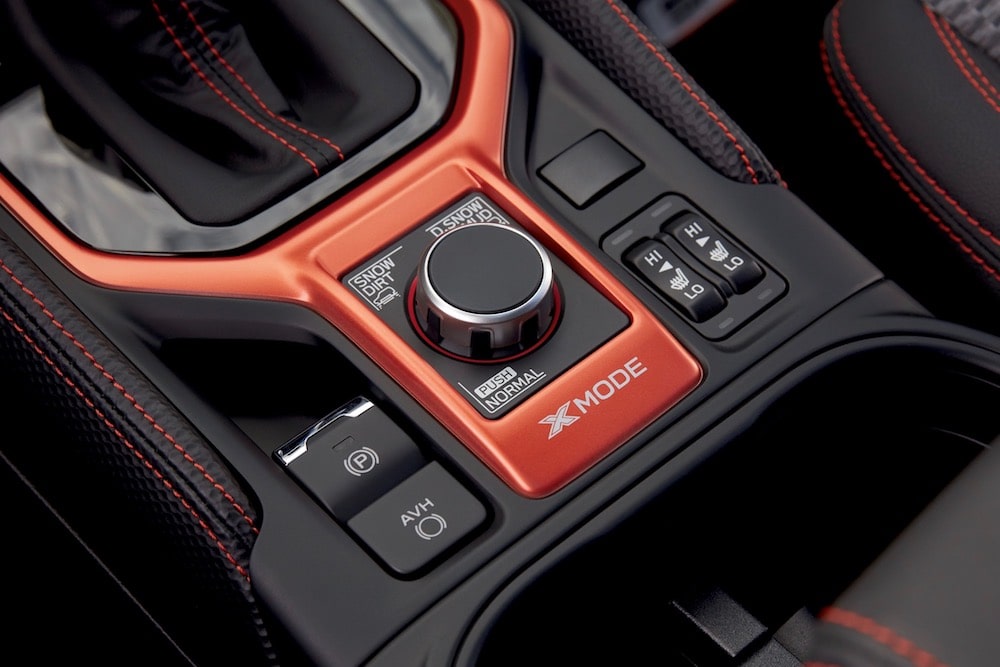