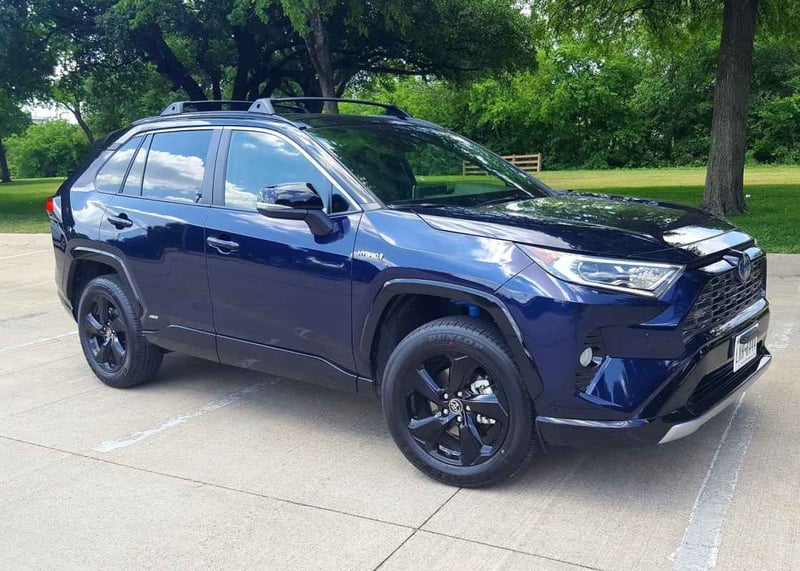 I mean, most of the hyper-practical compact-crossover SUVs tend to be about as much fun as a two-hour appointment with the icy ex’s lawyer.

Then throw in a hybrid powertrain, like the 2019 Toyota RAV4 I had recently, and the excitement fades faster than my youth.

But, uh, I was slightly wrong.

And that’s actually good news. Over the next few years, just about every new gas-powered vehicle in the U.S. will have some sort of electric motor to help them get better fuel-economy and lower emissions.

If the surprising RAV4 serves as a signpost for that approaching hybrid era – and Toyota is the leader in that technology – our vehicles should be faster, cleaner and more economical. Heck, they might even brush our teeth.

My RAV4 Hybrid, for instance, was considerably quicker than the non-hybrid model, got 35 percent better fuel economy overall and cost about $800 more.

As you probably heard, both versions of the 2019 RAV4 benefited from a thorough restyling with a sharp, precise knife.

The dark blue XSE model I had still sported a prominently blunt front-end, but its big blacked-out grille didn’t protrude or sag and was flanked by jaunty slender headlamps that sliced cleanly back into the fenders.

In back, high-mounted wrap-around tail lamps presided over dual exhausts, which didn’t look quite so silly given the RAV Hybrid’s spirited nature.

Of course, the big news with the RAV Hybrid resided beneath its hood.

A 2.5-liter four-cylinder engine with 176 horsepower drove the front wheels of the all-wheel-drive crossover while an electric motor powered the rear, giving it a total of 219 horsepower.

With most mainstream hybrids, the electric motor mainly gets the vehicle moving, handing the task off to a mild gas engine at about 20 or 25 miles per hour.

Typically, the performance feels pretty timid, but in the RAV4, the electric motor pushes the vehicle away from stops and then kicks in with power surges over the entire range, like a small turbocharger.

As a result, the 3,800-pound hybrid moves aggressively away from stops, accelerating with some verve if you keep your foot in it.

Sixty miles per hour arrives in 7.5 seconds, compared with 8 seconds for the gas version, according to Motor Trend.

It also returns overall fuel economy of 40 mpg, about 10 mpg better than the gas trucklet. Moreover, the stiff new architecture beneath the RAV4 – shared with the restyled Camry and Corolla – helps provide obedient handling and a slightly firm but compliant ride.

Like most hybrids, the RAV’s motors run through a continuously variable transmission (CVT) whose belt-and-pulley innards drone under hard acceleration, but aren’t all that noticeable in regular driving. Hooray.

The CVT in my RAV4, though, started squealing slightly in reverse at about 1,300 miles. It worked fine in “drive,” so I can’t even guess what was happening.

But, despite my dislike of CVTs, that was the first time I ever encountered something like that. 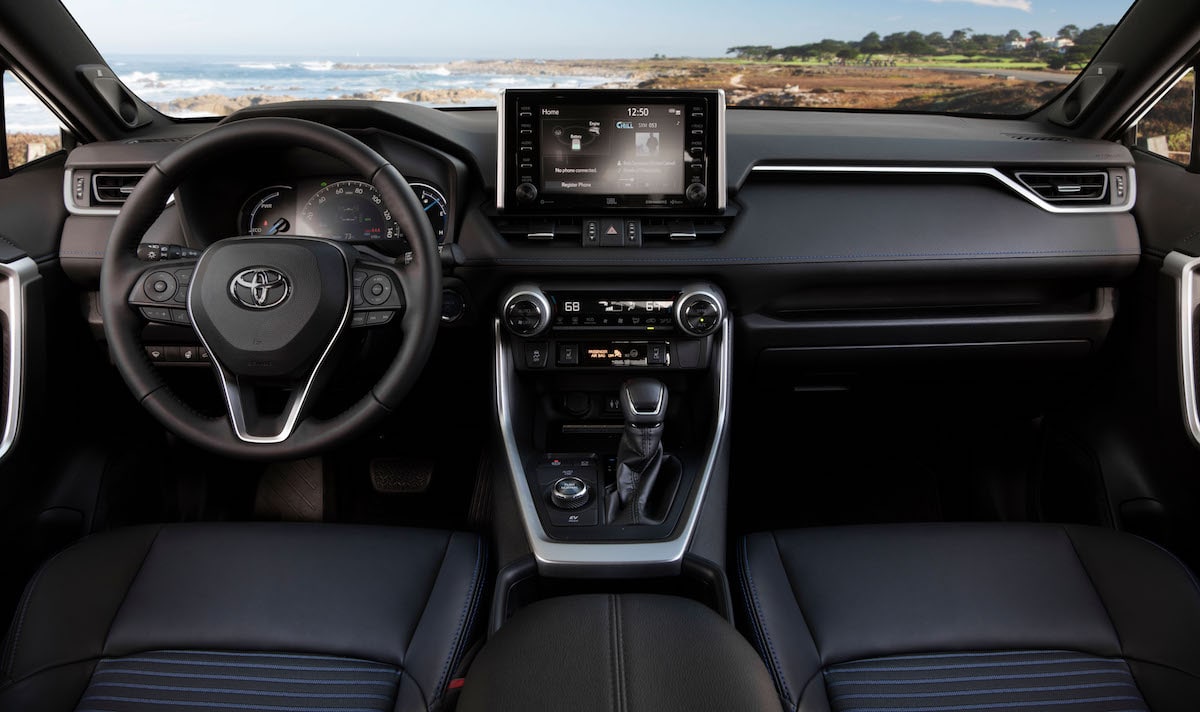 At about $38,000, the five-passenger RAV4 Hybrid occupies the higher-end of the price range for compact crossovers, and the black interior in mine generally reflected that.

An interesting two-tier dashboard, for example, wrapped around an 8-inch display screen about the size of an iPad that rose from the center of the mid-dash.

Buttons and knobs smartly controlled the audio system, while a slender panel beneath the display screen contained similar controls for the audio system. Meanwhile, door-panels in fairly plain black plastic wore a line of blue “stitching” at their tops, sort of matching the blue horizontal stripes in the cloth centers of the RAV’s smooth black-leather seats.

Though the headroom in back was good, leg-room felt a bit tight – a fairly common issue in compact crossovers whose buyers are often singles and couples.

As you might guess from the lofty window-sticker, my RAV arrived with a long list of options, including a weather package with heated steering wheel ($375); premium audio and navigation systems with music-streaming and Apple CarPlay capabilities ($1,620); a technology package with rear cross-traffic braking ($640); and a panoramic sunroof ($200).

For more than 20 years now, Toyota has built reliable hybrid vehicles with the personalities of good can-openers.

With the new RAV4 Hybrid, the can-opener sings, dances, juggles and smiles. 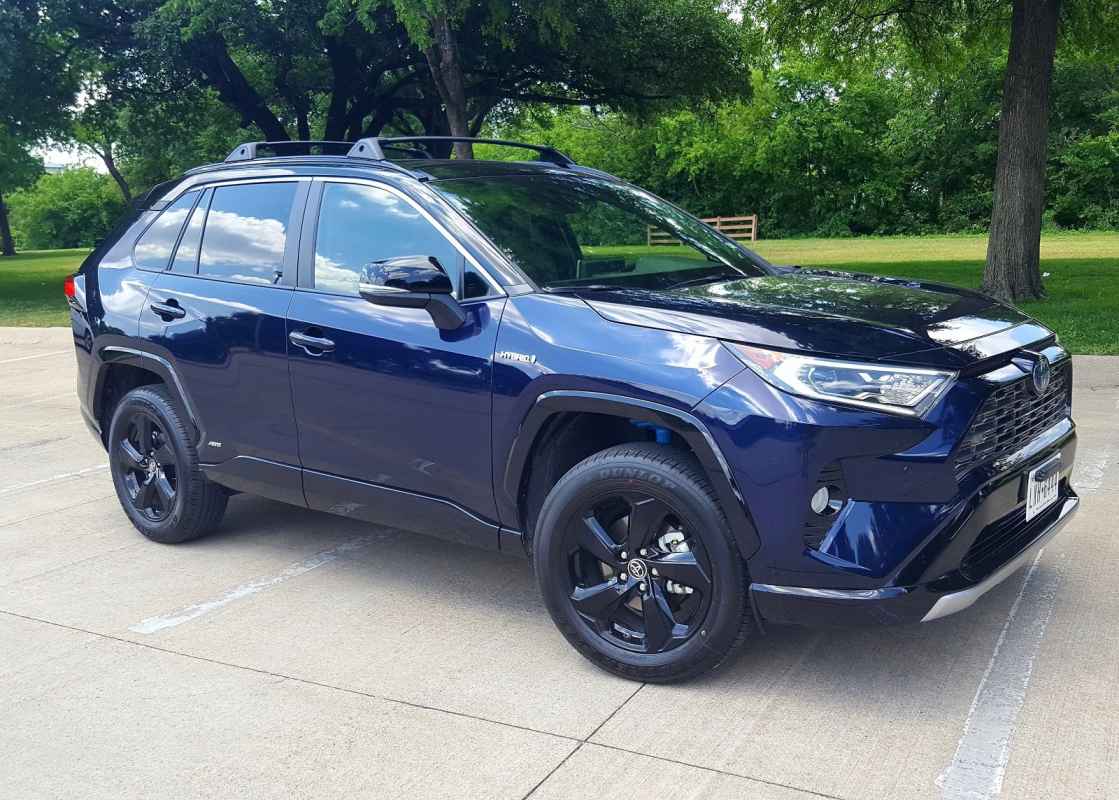 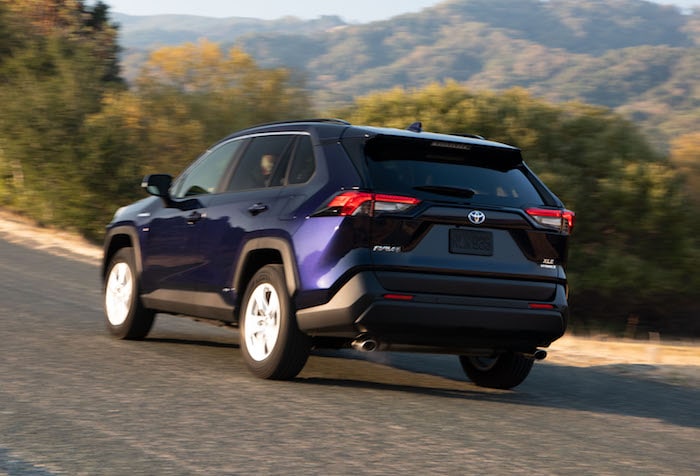 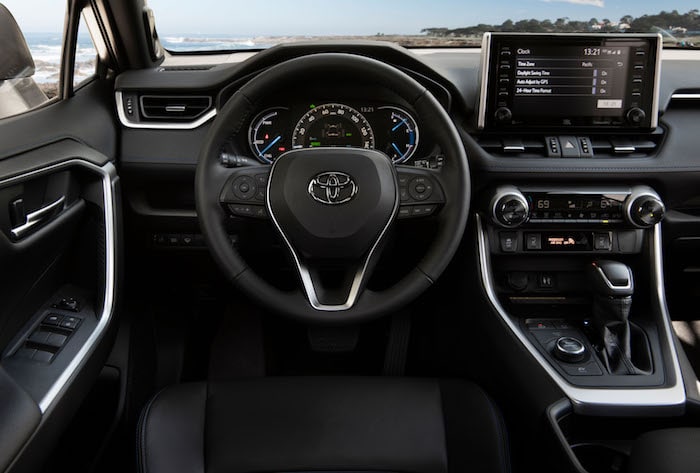 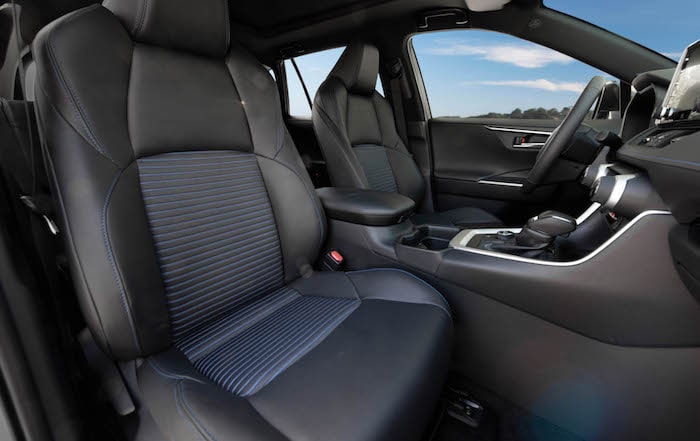 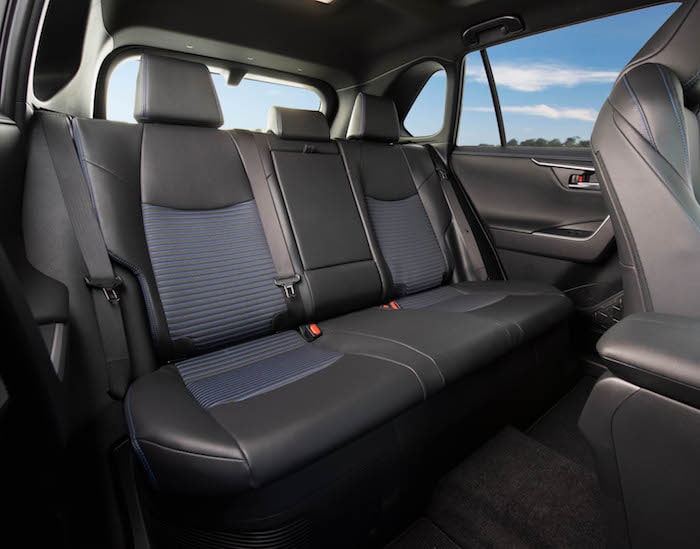 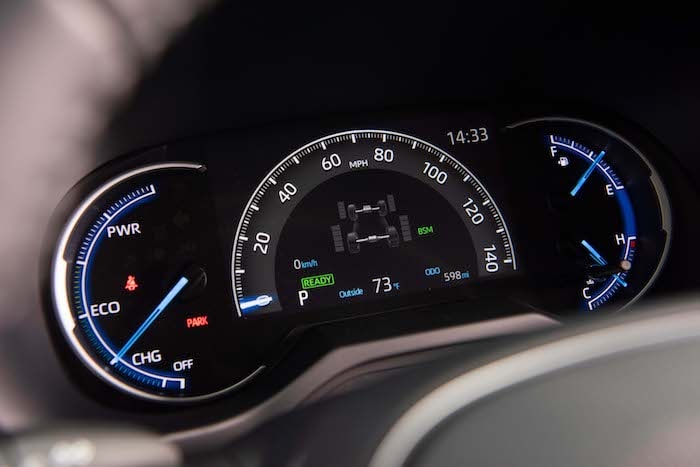 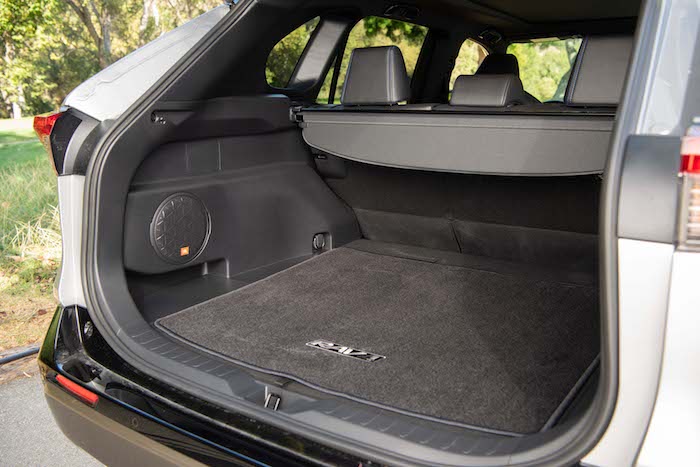