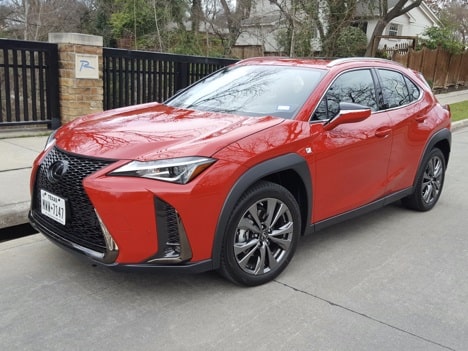 UX 200 – the name just suggests a vessel of some sort that Spock and I might use to zip around the edges of the universe.

“Spock, set the gyros for that cluster of icy stars over there.”

Right. In truth, we probably wouldn’t get quite that far.

However, the UX 200’s imagination-sparking name may help it stand out in a crowded and highly competitive segment – and it’s a late arrival to the game.

I mean, how can it hurt if people assume this little crossover might fly?

The red UX 200 F-Sport I had recently may be Lexi’s best-looking crossover, costs less than $42,000 and can claim overall fuel economy of 33 miles per gallon.

More important, the UX 200 wears that widely admired “L” brand on its rump, a weighty badge by most measures.

The truth is that while pleasant and well-proportioned, the UX 200 doesn’t really set any new standards for subcompact crossovers.

Like most Lexis, of course, the UX 200 has a blacked-out grille so large we could use it to cook a few dozen hamburgers and hot dogs for a Cowboys’ tailgate party.

And though the UX 200 sported sleek horizontal headlamps, its protruding front-end looked mostly thick and a bit clumsy – a trait of most Lexus crossovers, unfortunately.

Ignore it. The rest of the vehicle was sort of stylish, with short overhangs and squared-off wheel-wells trimmed in black plastic.

Moreover, a prominent crease on the front fenders faded into odd droopy lines above the door-handles, while strong rear fenders flashed wrap-around taillamps with little fins on top of them.

The UX 200 also benefited from a solid platform and well-sorted suspension that gave it a mildly athletic feel.

Although the UX 200 rode somewhat firmly, it didn’t bounce or bob, absorbing bumps with near-luxury indifference.

At speeds over 70 mph, in fact, the UX rode about as well as some mid-size crossovers.

It just struggles to get there. With just 169 horsepower spinning a continuously variable transmission (CVT), the UX 200 requires a leisurely 8.6 seconds to reach 60 mph – one of the slowest such times in the segment.

Around town, it surged away from stops with some authority, its CVT faking multiple shifts. (Toyota claims the UX has a 10-speed CVT, but I never counted that many in my driving.)

When I called for more steam to enter a fast-moving freeway, though, the UX 200’s four-banger flattened out considerably, underscored by irritating brays from the belt-and-pulley CVT.

While I never had any big problems merging with the hot-foots on the freeway, I often needed a running start.

The UX’s lack of performance, though, was largely offset by a fine black interior, probably the vehicle’s strongest feature.

Influenced heavily by more expensive Lexis, the interior looked high-end with a flat dashboard in smooth, semi-pliable material that dropped down to a protruding second tier stitched in red.

The lower tier wrapped around a 10.3-inch horizontal display screen with some of the stranger audio controls I’ve encountered.

They were housed in a flat puck-looking device that wrapped around the leading edge of a storage compartment on the crossover’s broad console, and were difficult to see in the dark.

I typically just started twisting knobs and hoped for the best.

The UX 200’s door-panels were much better-conceived, cast in the same smooth, slightly pliable plastic as the dashboard with padded armrests and sleek door-handles.

Just don’t put any big people you like in the back seat, where leg- and head-room are limited.

As you might expect in a Lexus, the UX 200 had a full contingent of safety nannies, including pedestrian detection, active cruise-control and lane-departure alert with steering assist.

But I expect the bold subcompact to still draw buyers with its distinctive styling, reasonable price and fine interior.

Too bad, though, that Lexus didn’t aim a little higher.