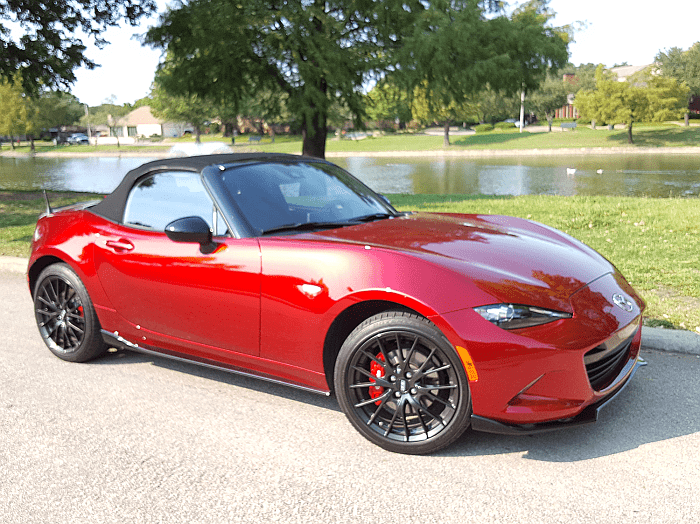 Barely bigger than some cardboard boxes, my favorite roadster lacks map pockets, a conventional glove compartment and a spare tire.

It steps stiffly over smooth suburban streets like some old man on a mission.

Moreover, compact crossover-vehicles tower over my sports-car, which sits so low that getting out of the blankety-blank thing can require assistance from the fire department.

Against all odds, the tiny, highly impractical Miata survives, attracting fewer than 10,000 buyers a year now, but still standing tall, sort of, as the best, sweetest-driving English-sports car ever built.

Think of it as an MG or Lotus that won’t leak oil all over your garage floor, has headlights and windshield wipers that work and never fails to start – though the virtuous Miata was clearly inspired by the cantankerous Brits.

Granted, the iconic Miata – a true halo vehicle for Mazda – is slightly larger in 2020 than it was when it arrived in the U.S. 30 years ago, a bit more refined and much faster.

While the new car retains the signature slick-jellybean Miata shape, 2020 versions of the two-passenger sportster are wider, longer, sleeker and about 300 pounds heavier.

My Club model rolled on fairly average-looking 205/45 tires front and back wrapped around black 17-inch BBS wheels – both of which are sized for optimal suspension tuning.

Meanwhile, a taut black-cloth convertible top completed the look, providing a center-mounted latch for quickly releasing the top and pushing it open with one hand.

For years, however, I have complained about modern Miatas’ so-called Sky-Activ engines, which tended to be smooth and responsive down low but soft and disappointing up high – where sports cars live.

Not that my grouses had any effect, but Mazda finally revised the Miata’s 2-liter four-cylinder engine, using a few hot-rod tricks to push it to 181 horsepower, up 26.

That may not sound like much, but in concert with a six-speed manual, the Miata now acts like it just got a new tattoo.

The 2,400-pound roadster pushes happily through the mid and upper ranges these days, hitting 60 mph in a quick 5.7 seconds, according to Car and Driver.

Punch the engine in second gear at 5,000 rpm and it actually jumps now.

Call me an outlier, but I once again found the six-speed transmission and the car’s shift-linkage to be kind of balky.

I always get accustomed to it, but most reviewers rave about the Miata’s slick-shifting transmission and responsive clutch. Maybe my arms are too short.

Of course, the car’s handling is beyond reproach.

Light-feeling and playful, the rear-wheel-drive Miata darts into corners with edgy eagerness, sliding lightly in back if you push it but never losing its grip or composure.

It will make you a better driver.

No car I’ve driven this side of a six-figure Porsche can match the Miata’s quick, lively steering that sweetly transmits the various surfaces of the road.

The price you and your passenger will pay for this lusty agility is a choppy, overly busy ride over most surfaces – with a fair amount of road-noise.

Keep that in mind also when you climb into the tight cockpit of the $36,000 Miata.