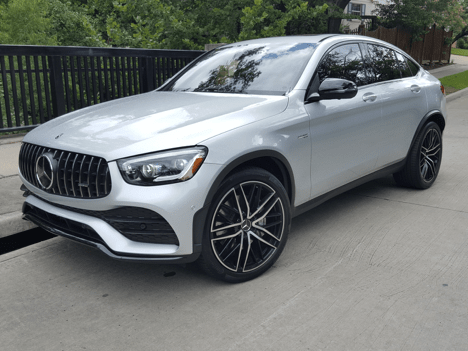 Confusion seems to cloud everything I touch these days.

I mean, should my mask and gloves match my shirt? Can I substitute flip-flops and a Big Daddy Roth T-shirt on Fridays and still meet office-casual rules for my home-alone office?

With those meaty topics weighing on me, I confronted the 2020 AMG GLC43 Coupe last week – a vehicle that is not technically a car, is nowhere near a “coupe,” lacks an SUV bustle in back, but sits up high like the all-wheel-drive crossover it sort of is.

Mercedes and its performance division, AMG, contend that the GLC “Coupe” combines some of the strengths of a traditional SUV – mainly ride height, all-wheel-drive and greater ground clearance – with the magic of a high-performance sedan.

If nothing else, it is distinctive – along with similar models from BMW – and that counts when you’re trying to sell an $80,000 mid-size vehicle that appears to have eaten a sedan.

Like most new Mercs, the silver GLC I had recently arrived with a beguiling sneer – a bold, 17-bar grille that neatly treaded the line between interesting and excessive.

Its longish, slightly raised hood provided a good backdrop for the enormous Benz “star” in the center of the grille.

Meanwhile, the sides of the GLC wore a subtle bulge and barely flared fenders that gave the vehicle a muscular feel.

With better proportions than BMW’s large SUV-coupe, the awkward X6, the GLC attracted plenty of looks and comments – most of them positive. 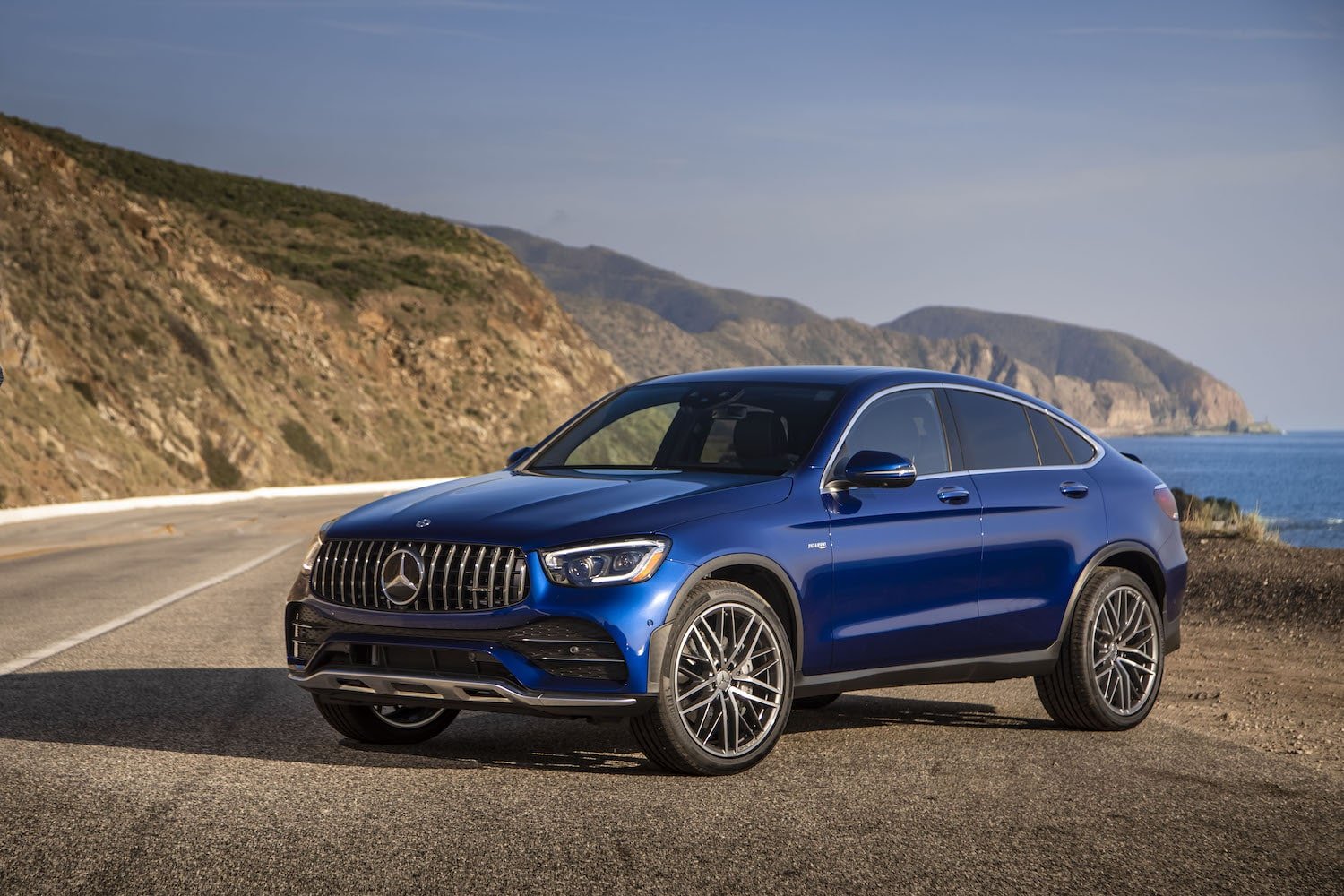 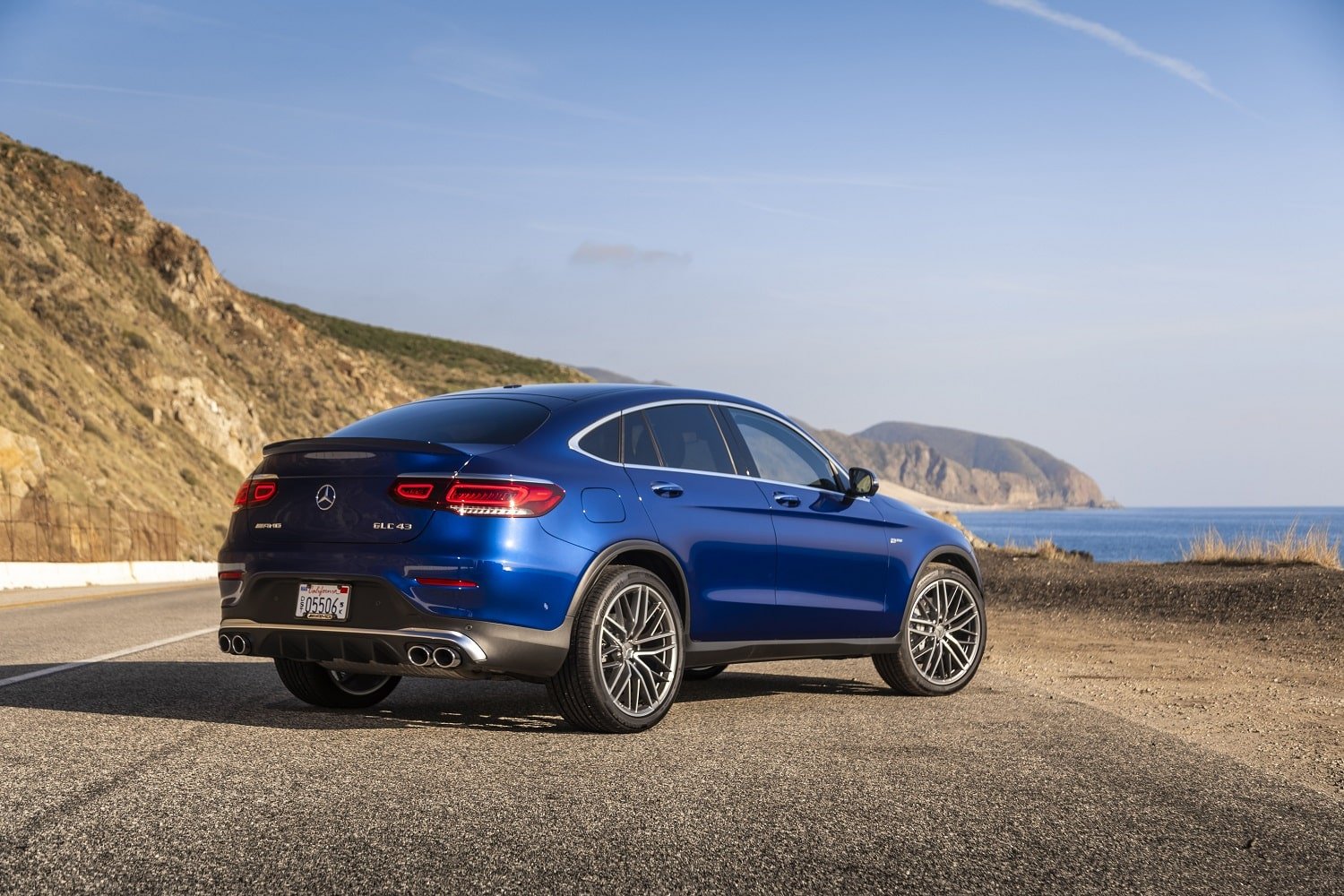 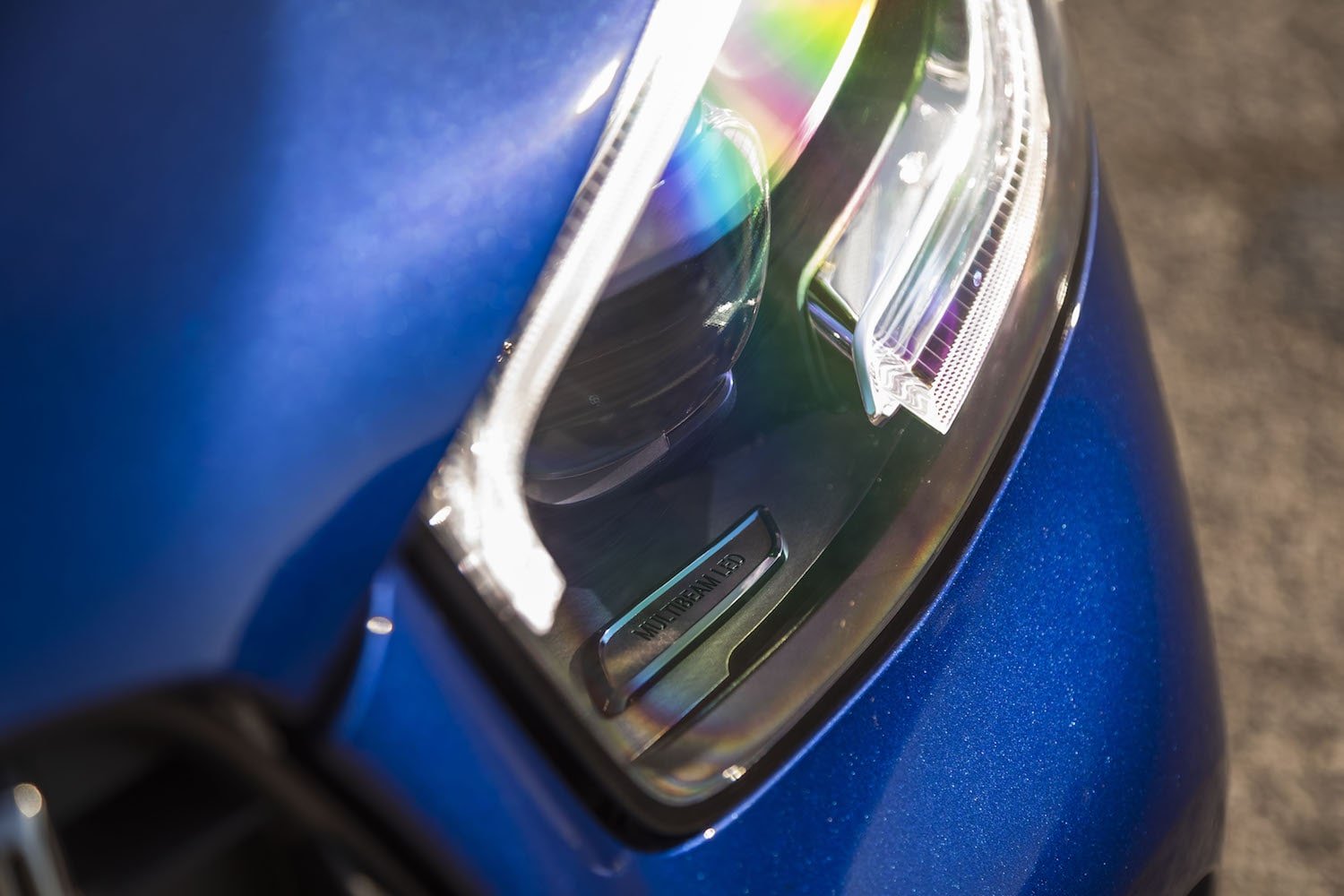 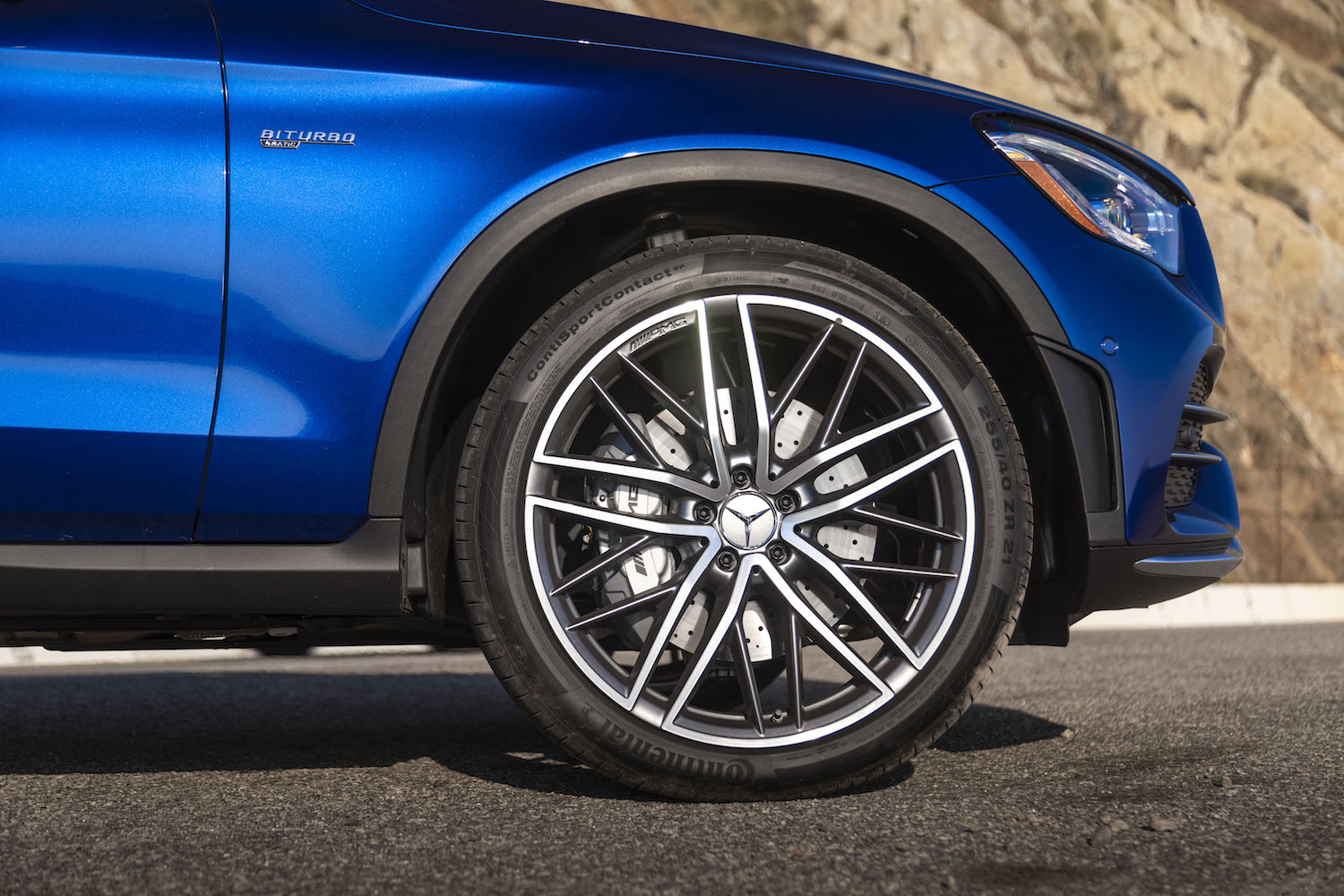 Best of all, it wasn’t some poseur – despite its strutting appearance. As an AMG model, the GLC sported a twin-turbocharged 3-liter V-6 with 385 horsepower routed through a nine-speed automatic and all-wheel-drive.

Although the lively, rowdy engine suffered a little from turbo-lag, it tended to get over it quickly, charging hard past 6,000 rpm with the flat bellow of a healthy six.

Sixty miles per hour arrives from a dead stop in a brief 4.2 seconds, according to Car and Driver, meaning you won’t have any trouble merging onto Baghdad Boulevard at rush hour.

Most of the time, the GLC’s nine-speed automatic had no trouble keeping up, clicking off swift, positive shifts. Sometimes, though, the transmission seemed confused, slurring its down-shifts.

You’ll barely notice. The engine has a fat power curve that tends to maintain momentum even when the transmission is a bit lost.

Don’t expect exceptional fuel economy, however. Though a mid-size vehicle, the GLC weighs 4,300 pounds and averaged a modest 21 miles per gallon in fuel economy. 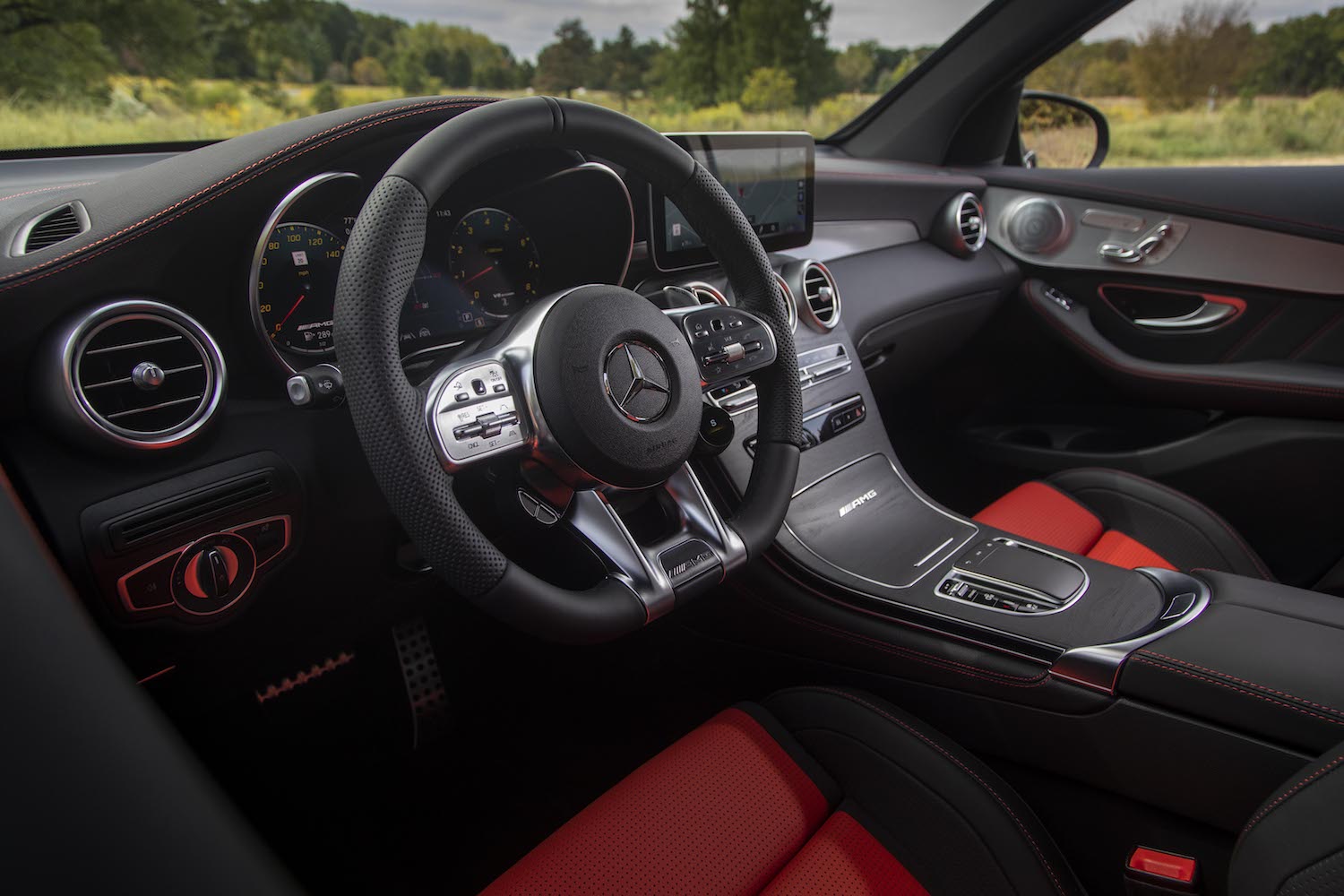 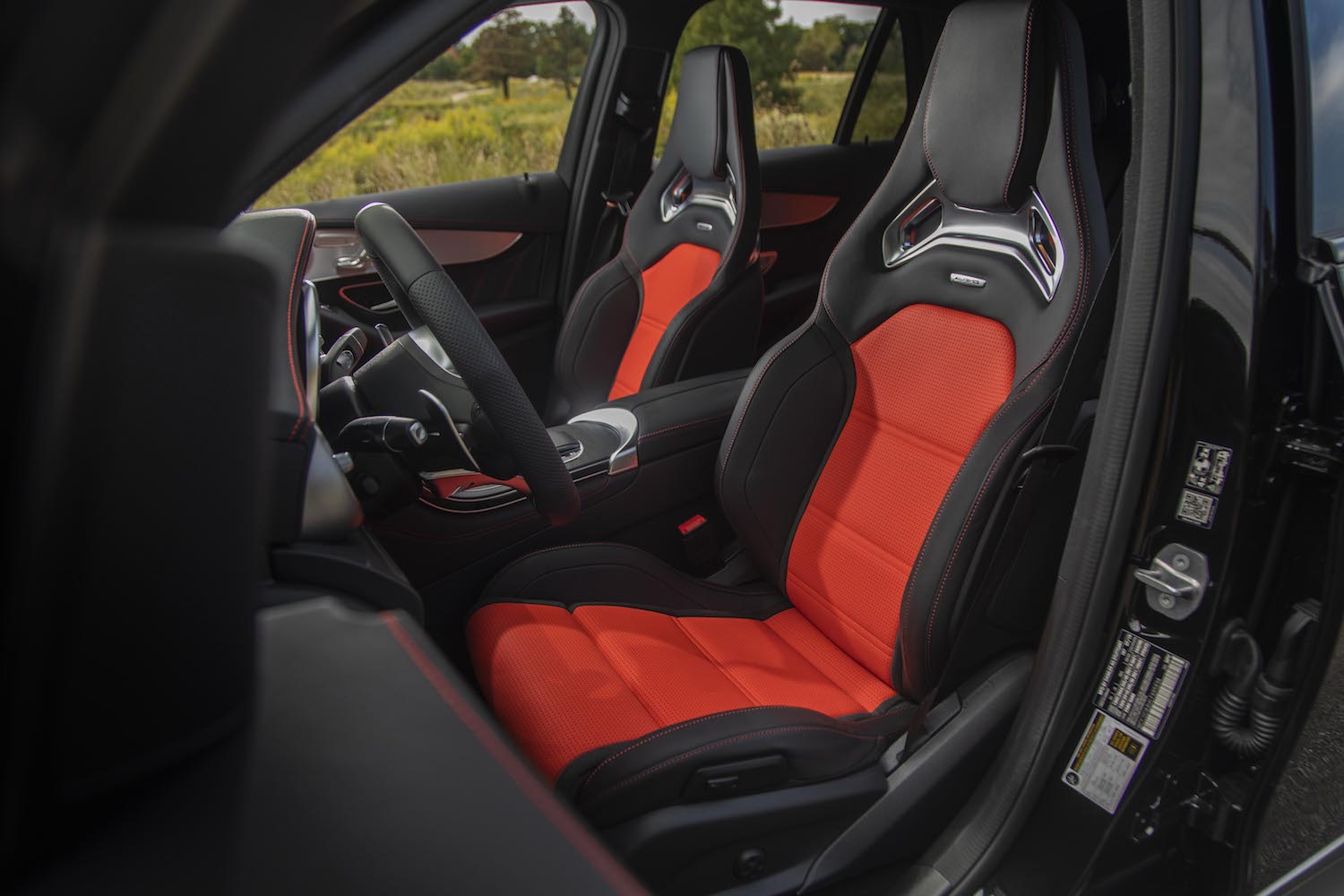 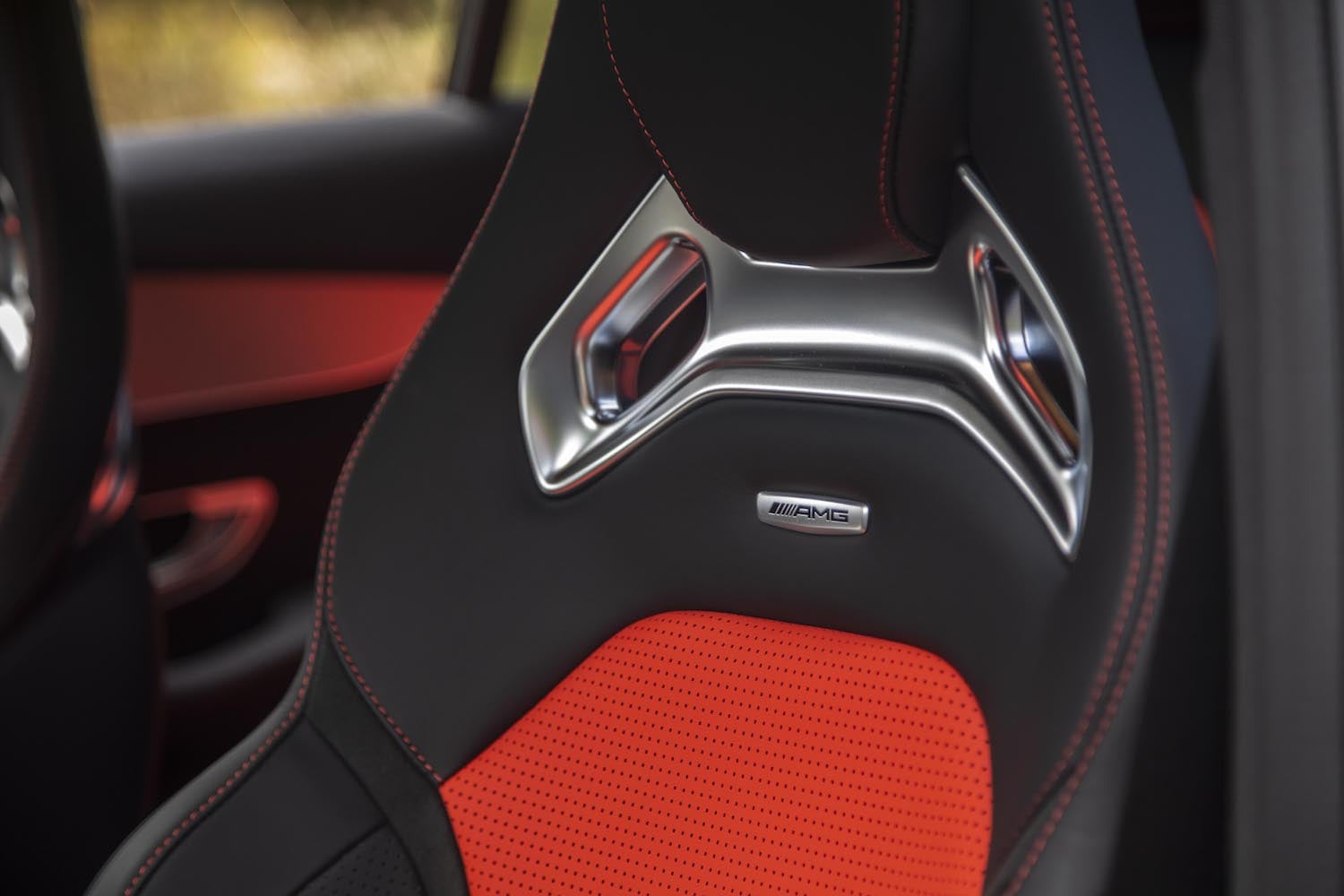 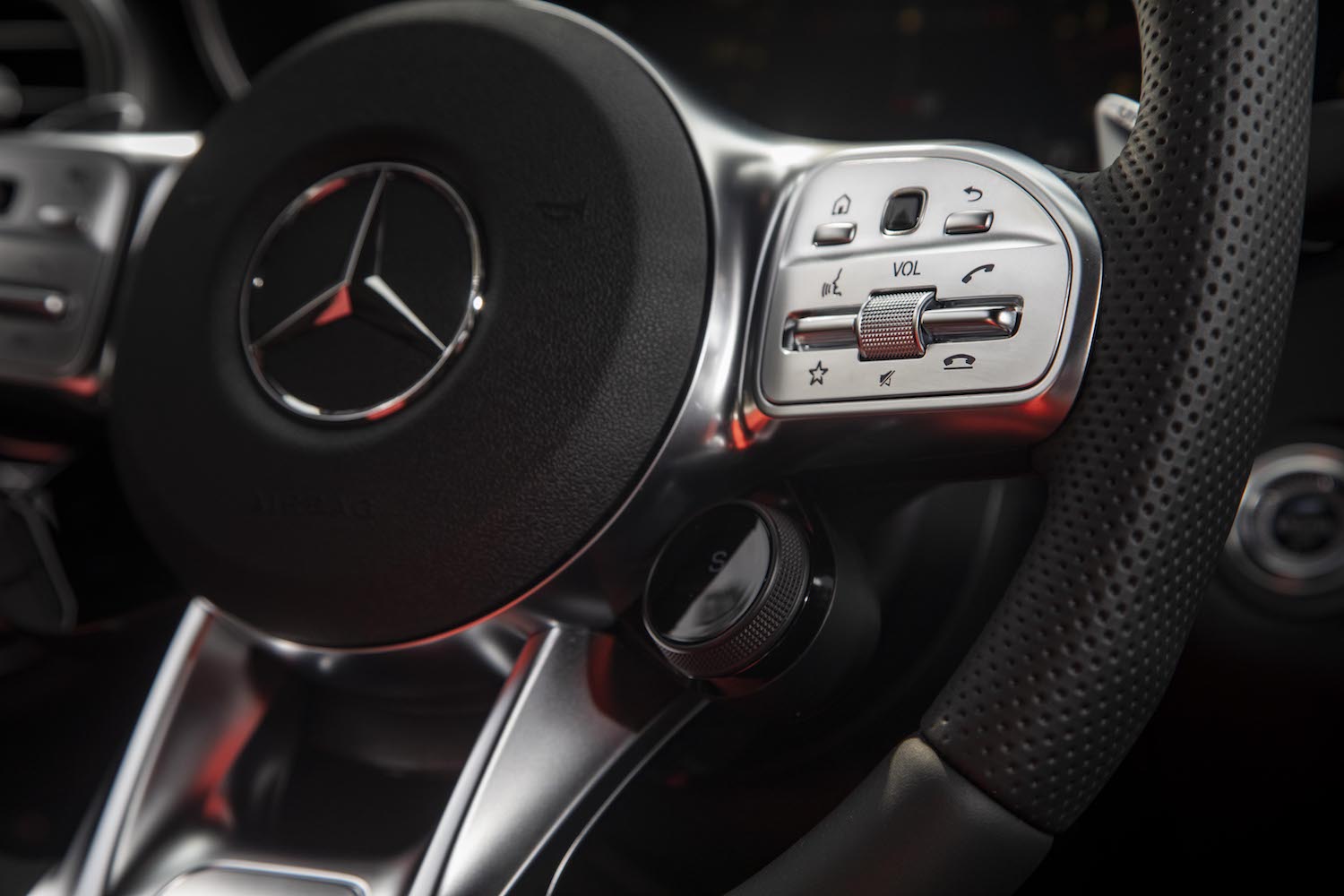 Likewise, the power steering felt numb most of the time, but was quick and could be trusted to place the GLC where I wanted.

That was no small matter, either. While a bit thick and kind of heavy, the “coupe” never minded being tossed into corners, powering out of them with good grip and minimal lean.

Moreover, it rode nicely in “comfort” mode – particularly for something with a relatively short wheelbase and all-wheel-drive.

AMG even provided an impressive black-and-dark-red interior in my GLC, a space that nicely blended sport with near-luxury.

The vehicle’s pliable upper dashboard, for example, stitched in a flat-tone material, dropped down onto an upright mid-dash dominated by a 10.25-inch touchscreen.

Somewhere in there was all sorts of technology, including Apple CarPlay and AndroidAuto, steering assist, brake assist and blind-spot assist.

The interior also featured a flat-bottom $500 high-performance steering wheel, as well as carbon-fiber trim on the dash and broad console. 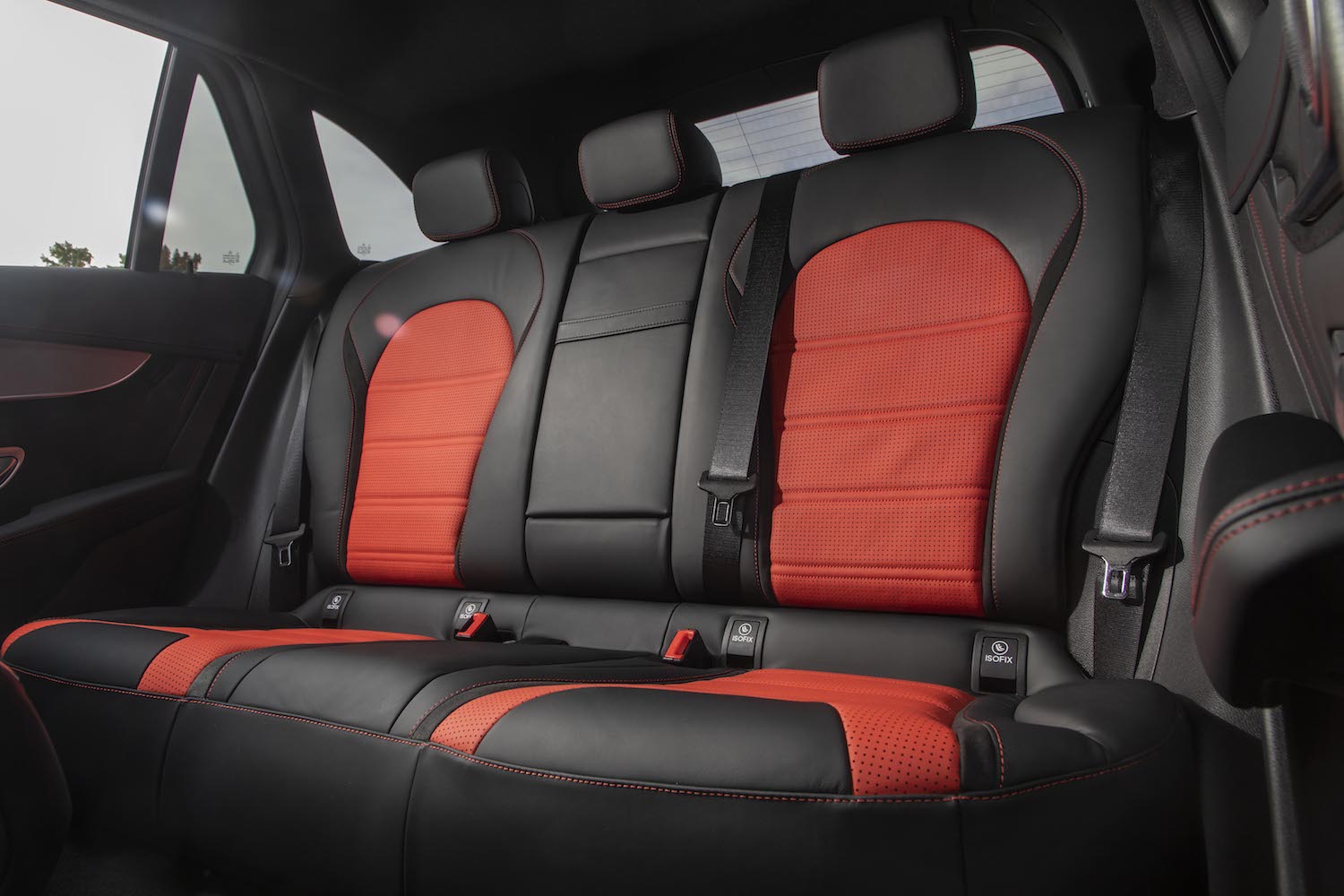 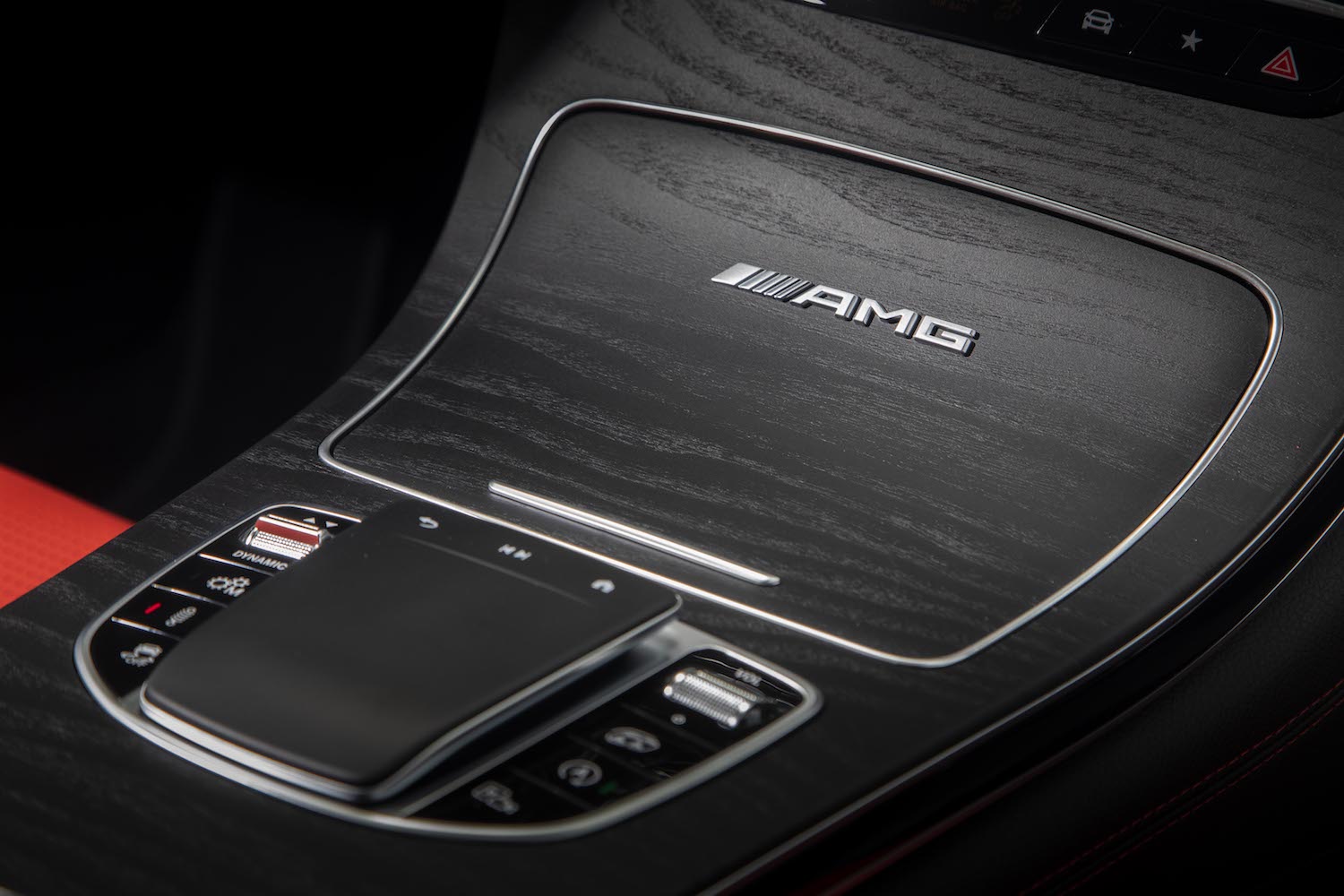 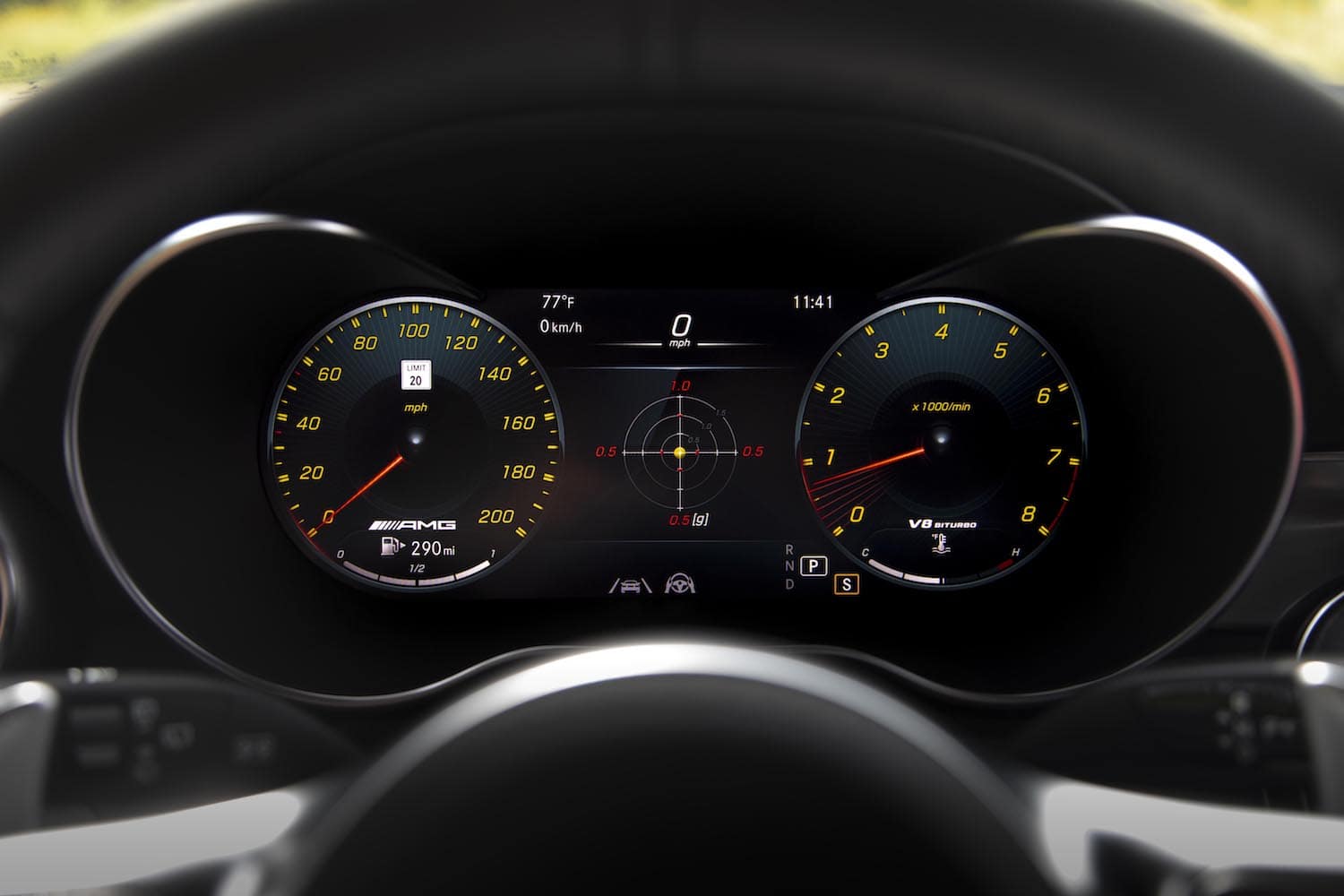 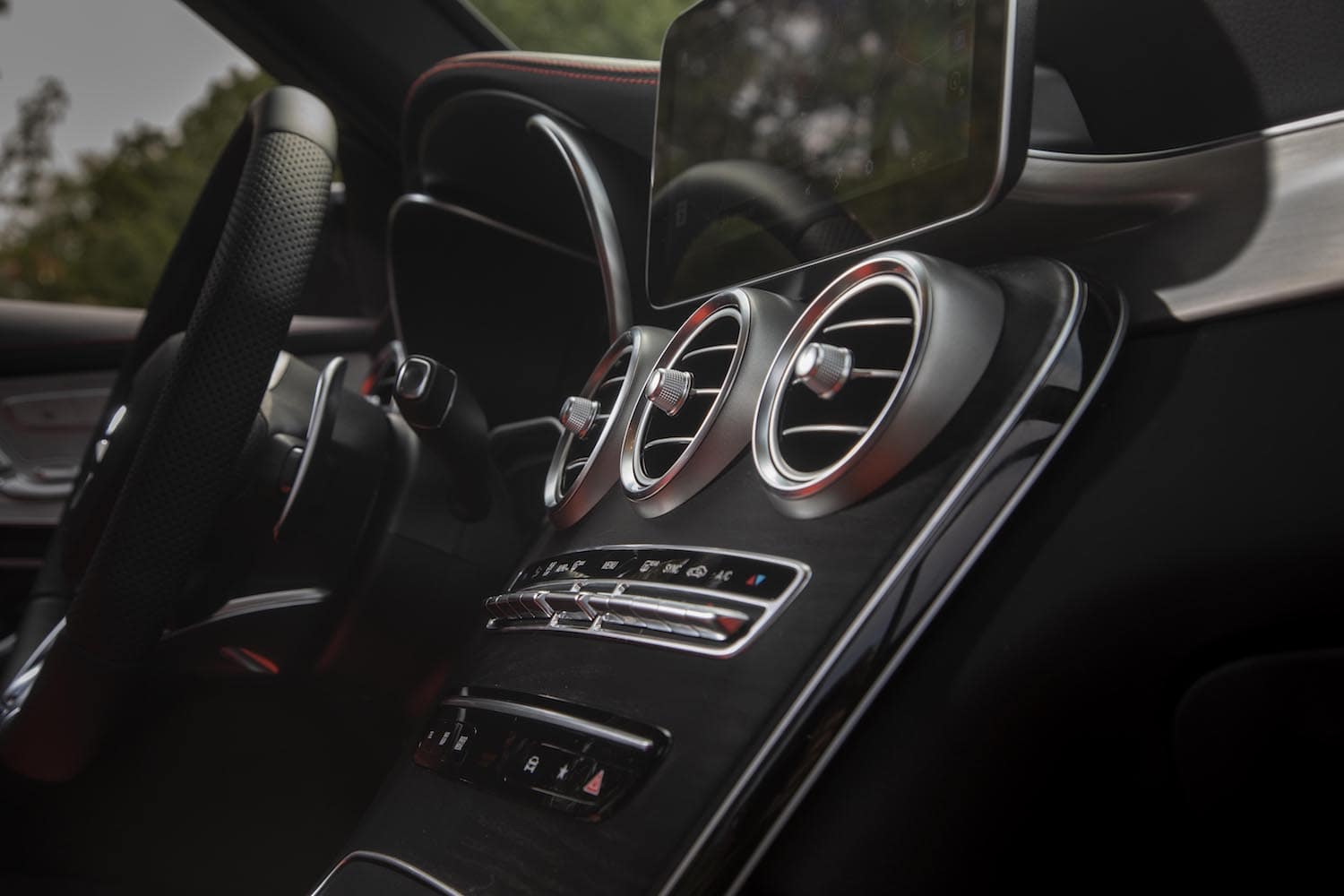 Like all new Mercs, the GLC utilized a thin stalk on the right side of the steering column as its gear selector – a device that works well as long as you don’t mistake it for the windshield-wiper actuator.

The car/truck/cruck’s seats, though, were pretty special, covered in cranberry-colored leather with sporty, supportive black bolsters.

Leg- and headroom in back were acceptable, which is pretty typical in mid-size vehicles.

As a car traditionalist, I can’t get too revved up about strange vehicles like the GLC43 “Coupe.” But I admit it is handsome in its own contrarian way and offers capabilities most cars don’t.

Now that I’m Mick Jagger, maybe I’ll add one to the fleet someday.