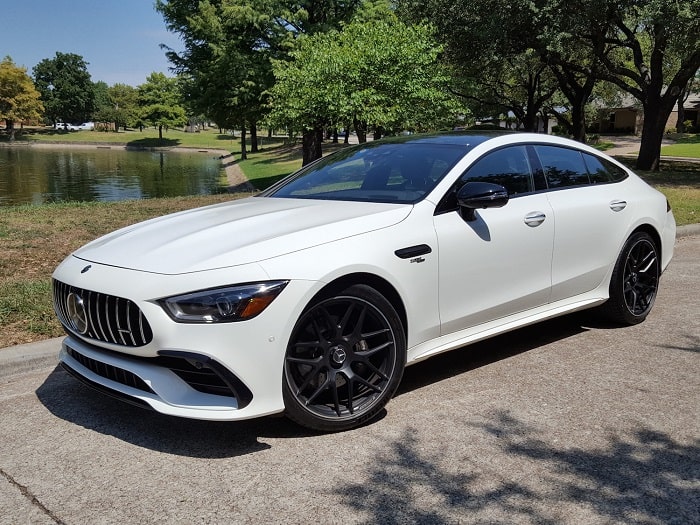 German cars swoop where others stumble, snarl when vehicles around them tend to sputter.

They inhale concrete as if it were an hors d’oeuvres, wearing their over-sized sense of superiority like a gimme cap.

None struts better than the stunningly sleek 2020 AMG GT, a mid-size sedan built by the hot-rod AMG division at Mercedes-Benz to disappear on command.

Turbocharged, supercharged and assisted occasionally by an electric motor, the six-cylinder GT 53 taps practically every power source short of wind and nuclear.

As you probably know, AMG has been Mercedes’ performance division for decades, fitting special sedans and crossovers with beastly engines, and track-ready suspensions and brakes.

With the GT 53 and V-8-powered 63 sedans, though, the Benz let AMG design and set up the vehicles – rather than just modify them.

They pretty much nailed it with the white elegantly aggressive GT 53 I had last week, a rakish 4,500-pound sedan full of leather and fire.

Low and wide, the GT 53 sported one of Mercedes’ big 14-bar grilles with a giant star-like Merc symbol in the center, flanked on the outside by long, slender headlamps.

Meanwhile, an elegantly sculpted hood topped muscular sides that settled on massive 21-inch black wheels wrapped by 275/35 tires up front and 315/30s in back.

The black wheels, which looked decent thanks to polished rims and distinctive centers, contrasted with giant silver cross-drilled brake-rotors.

But the most distinctive aspect of AMG’s strong styling was the dramatically curving hatchback roof, which slid gracefully into a smooth, rounded rear. 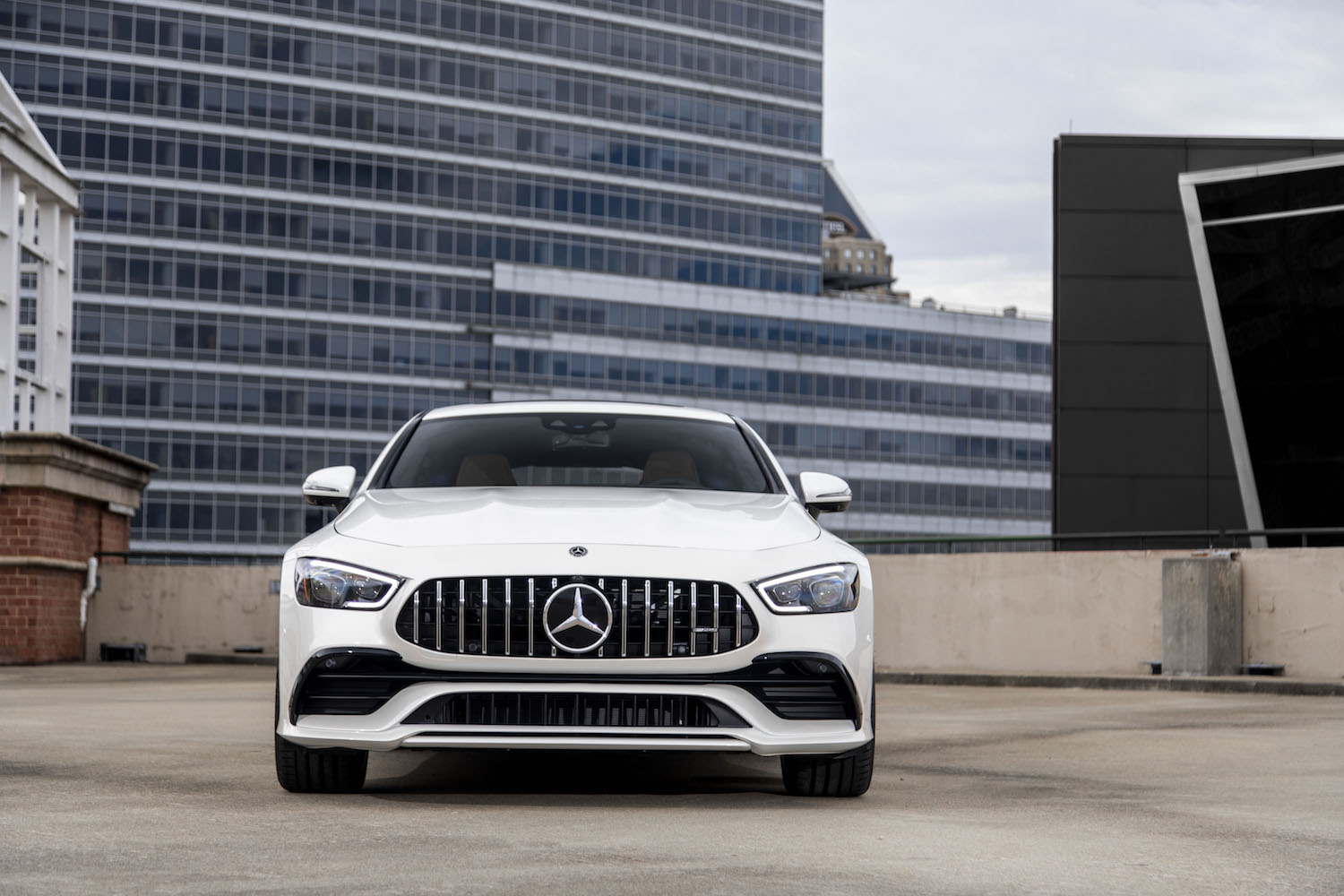 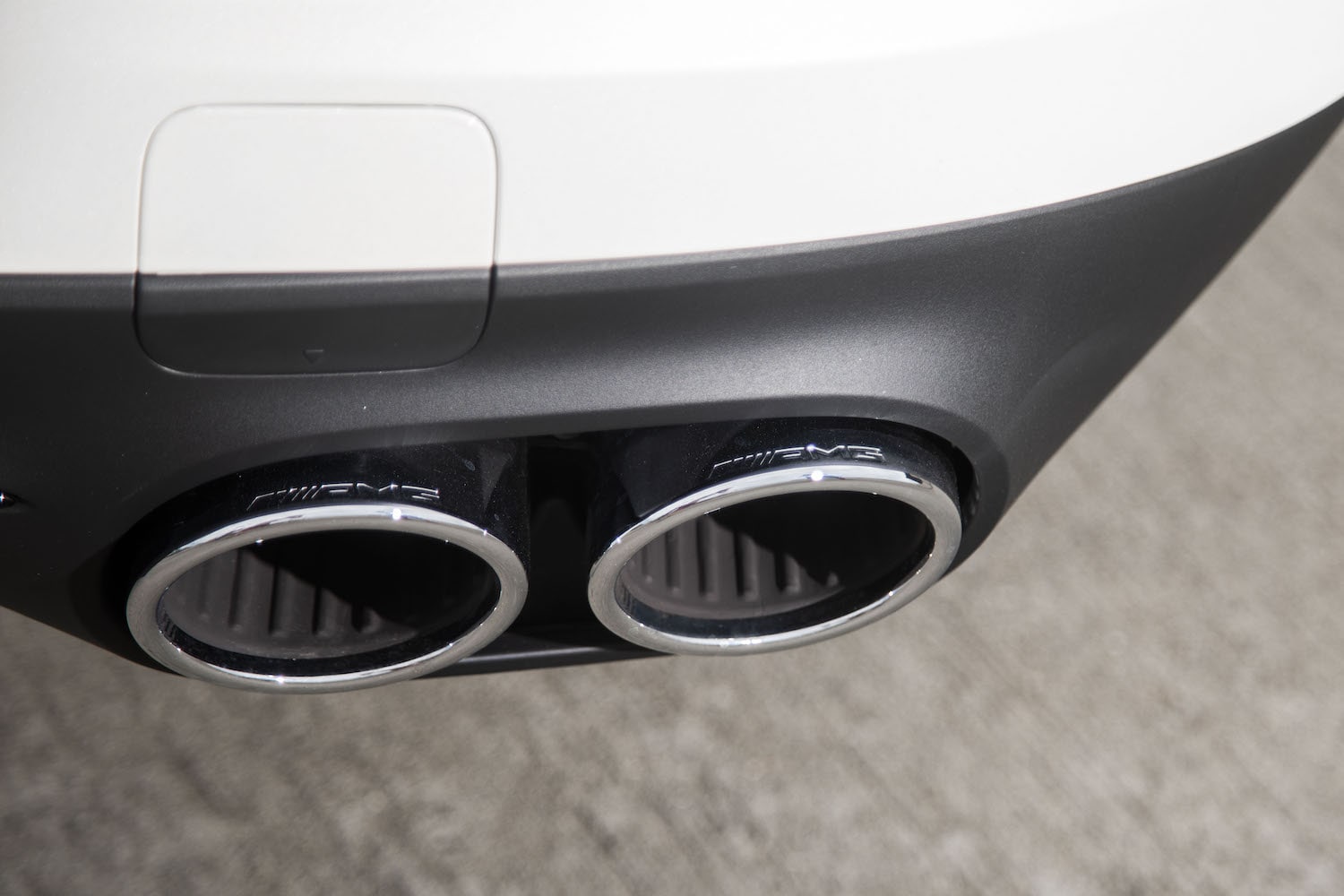 If I had any real reservations about the GT 53, they centered on the car’s staggering complexity.

Its 3-liter six – a straight six, no less, like Mercedes used to build – derived most of its 429-horsepower from turbocharging.

However, as you probably know, turbos tend to suffer some lag until the impellers inside the turbo can spin fast enough to build boost.

So, AMG filled the little gap with a supercharger and 21-horsepower electric motor, helping the all-wheel-drive GT 53 achieve a swift 4.1-second run to 60 mph, according to Car and Driver.

Bolted to a 9-speed automatic, all those power sources combined to deliver overall 21 mpg fuel economy.

Accelerating with a baritone howl, the GT 53 leaped away from stops in a noisy blur, staying pumped-up and angry past 6,000 rpm.

Despite its bulk, the GT 53 can hang in curves and corners with the big boys.

It’s the linebacker that can chase down hip-swiveling running backs.

The big four-passenger sedan turns into corners as aggressively as most smaller cars, staying balanced and flat, and uses its grip and sophisticated suspension to rotate cleanly out of them.

With those sorts of moves, of course, you typically get a flinty ride, and the GT 53 tends to telegraph the surface of the road beneath it – sometimes with a bit of thump and bump.

Likewise, the steering was kind of thick and heavy, but tightened in corners to let the driver know what was going on up front.

I just let the GT 53’s black interior smooth the rough edges – most of the time.

Its upper dashboard, for example -- stitched in soft leather – rolled down to a mid-dash absolutely dominated by two horizontal 12.3-inch screens side-by-side for the instrument panel and infotainment system.

The infotainment system could be especially distracting, requiring the driver to tune the stereo system with a balky, cantankerous pad on the car’s broad console. 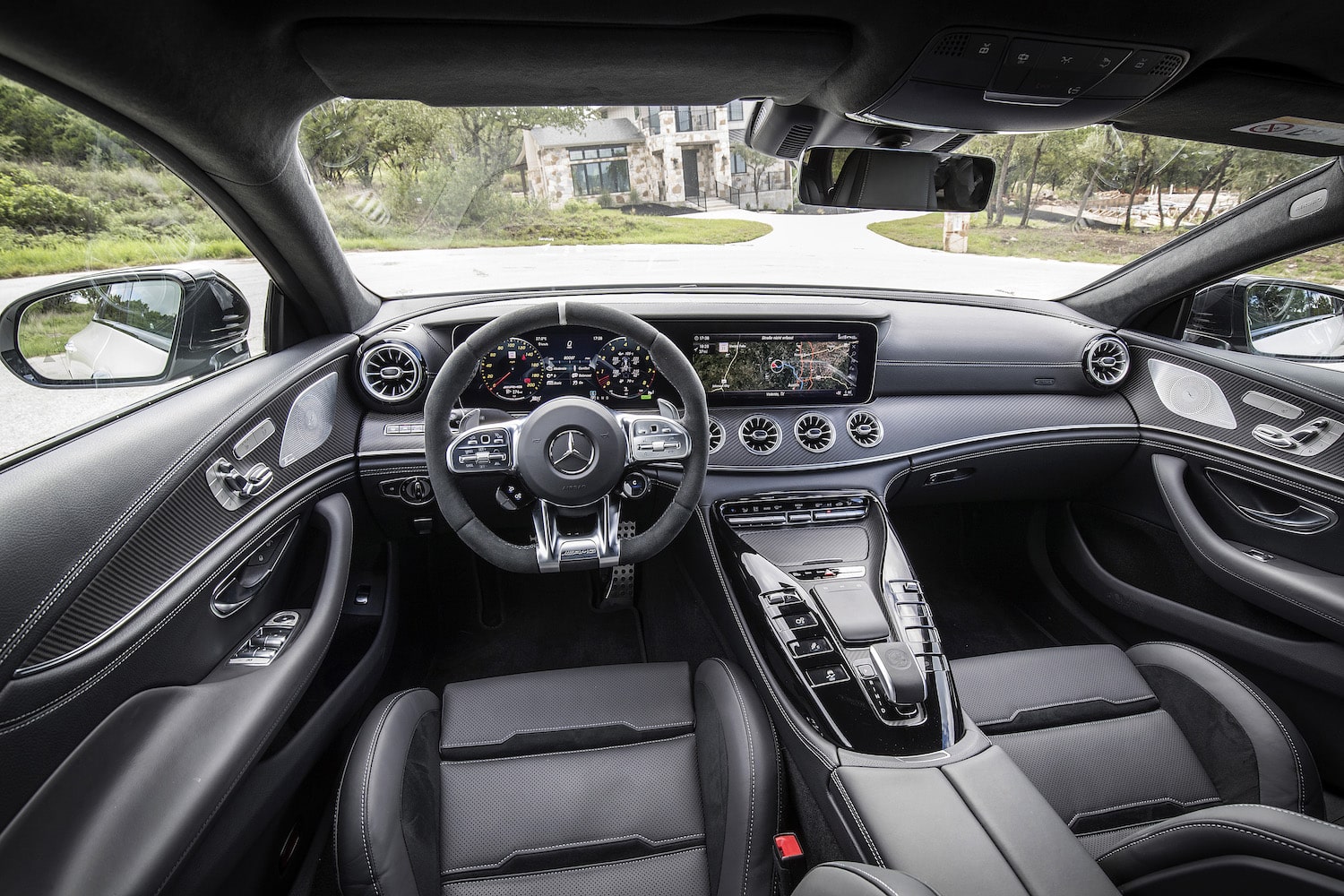 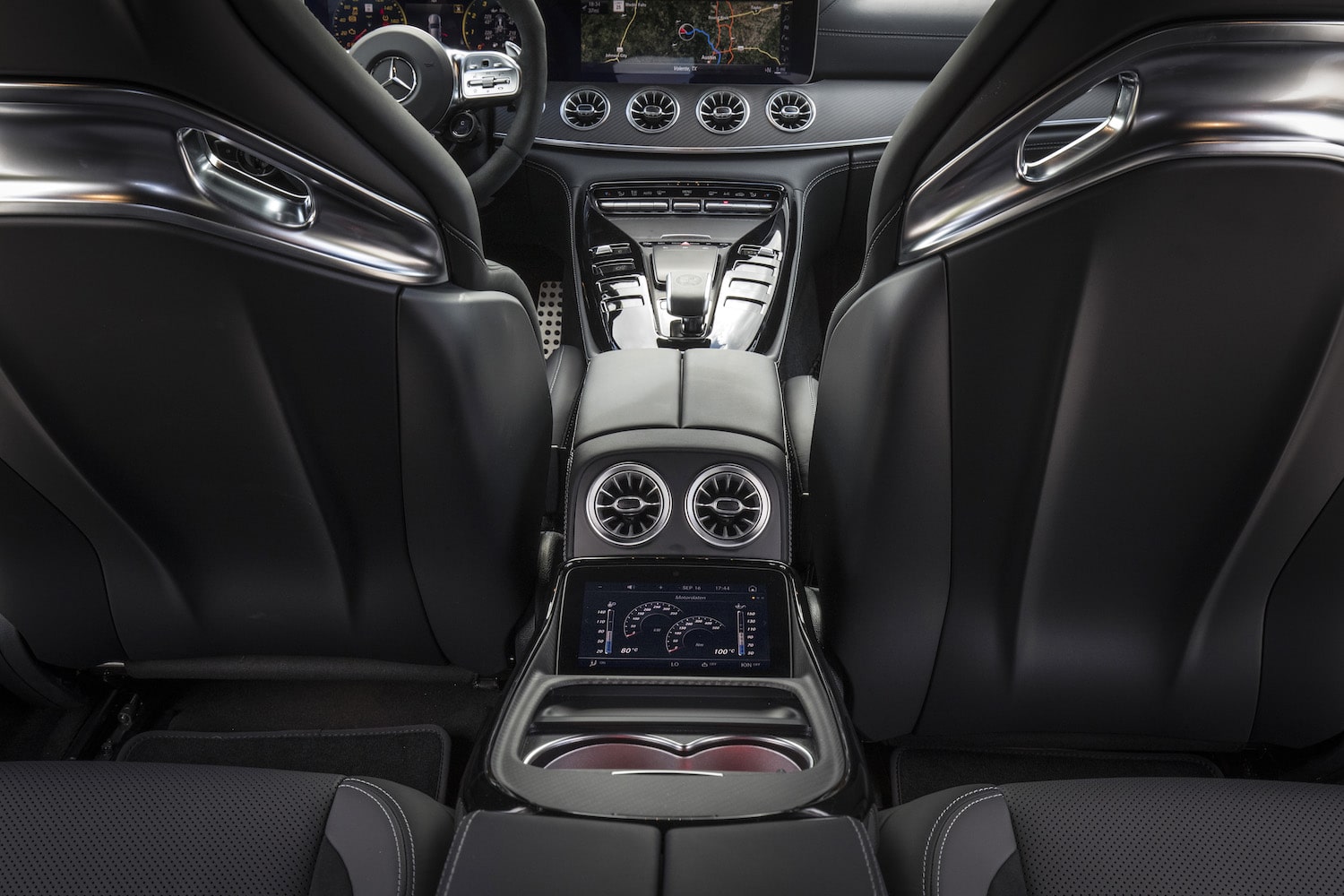 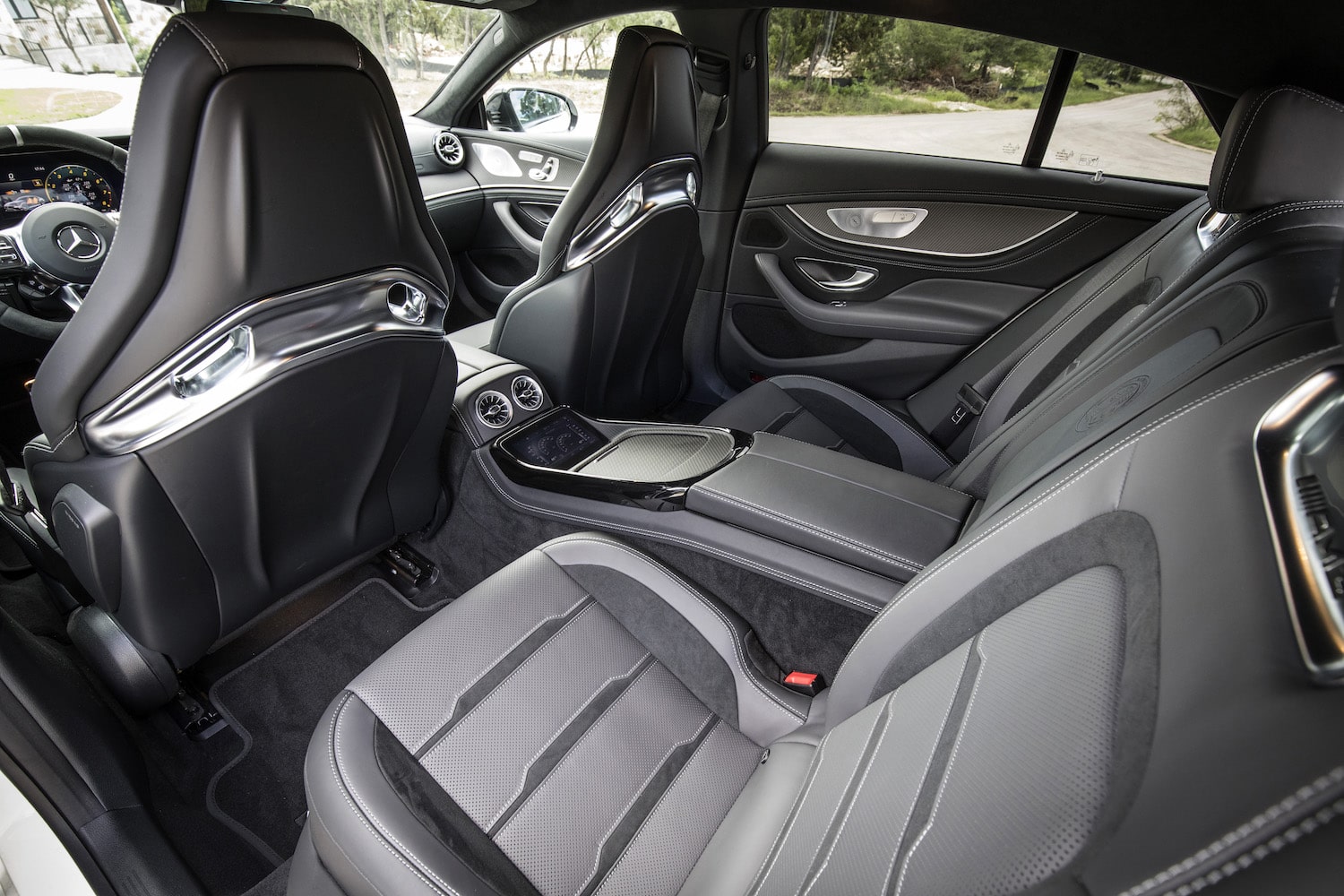 And if you happen to just brush the pad with your elbow while driving, the station disappears, requiring you to tune it again.

Somewhere in all that mess were useful features such as brake assist, blind-spot assist, lane-change assist, evasive-steering assist and parking assist.

But they couldn’t justify that blankety-blank pad.

Fortunately, carbon-fiber trim beneath the screens softened my irritation some, as did a nifty console that extended all the way back between the rear bucket seats, enhancing the cockpit feel.

If you’re over 6 feet tall, you’ll likely bump your head getting into the back buckets. But once there, you should find them reasonably comfortable.

Just remember: This is a sports sedan, not an S-Class.

Maybe it’s all worth it – particularly if you don’t want many limits or compromises.