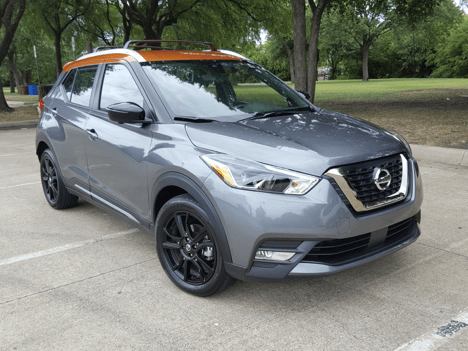 Any dinky crossover vehicle steeped in the Stones gets a second look from me – period.

I believe it’s a rule in the auto industry.

Granted, I seriously doubt that Nissan had Mick and Keith in mind when it developed its newest subcompact crossover, the Kicks.

I consistently heard strains of “get your kicks on Route 66” every time I walked up to the little crossover, and that’s not a bad start.

Heck, plenty of marriages are built on less.

As you probably know, cash-strapped Nissan is late to the subcompact crossover segment, and faces competitors such as the Jeep Renegade, Mazda CX-3, Buick Encore, Honda HR-V, Hyundai Kona and Kia Soul.

The Kicks, introduced in 2018, enters the fray with no big weapons – strictly average performance, reasonable but unremarkable fuel economy and a merely decent price.

However, it may be one of those rare vehicles in which the whole is greater than the sum of its modest parts.

Plus, I give credit to the Kicks’ designers for toning down Nissan’s tendency to scream at buyers with exaggerated styling rather than speak quietly with compelling content.

Of course, my $26,000 Kicks arrived last week in a dark coat of metallic gray capped by a top in orange-copper. I kind of liked it, to be honest.

Thankfully, though, the zaniness mostly stopped there. My friendly SR model wore one of Nissan’s typical blacked-out, bucket-shaped grilles trimmed in chrome, as well as bulbous headlamps that swept back into the fenders.

In a kind of nifty touch, the Kicks’ sported a raised hood that fit truck-like on top of its fenders rather than between them.

Otherwise, it kept things fairly low key with a subtle character line through the door-handles and slight bulges around the fenders.

The little box rode on smallish 205/55 tires mounted on utterly average 17-inch black wheels. (Is anyone else out there as tired of all-black five-spoke wheels as I am?)

The Kicks’ best feature, though, is its solid sophisticated-feeling platform, which gives the car a high-end ride and decent agility. 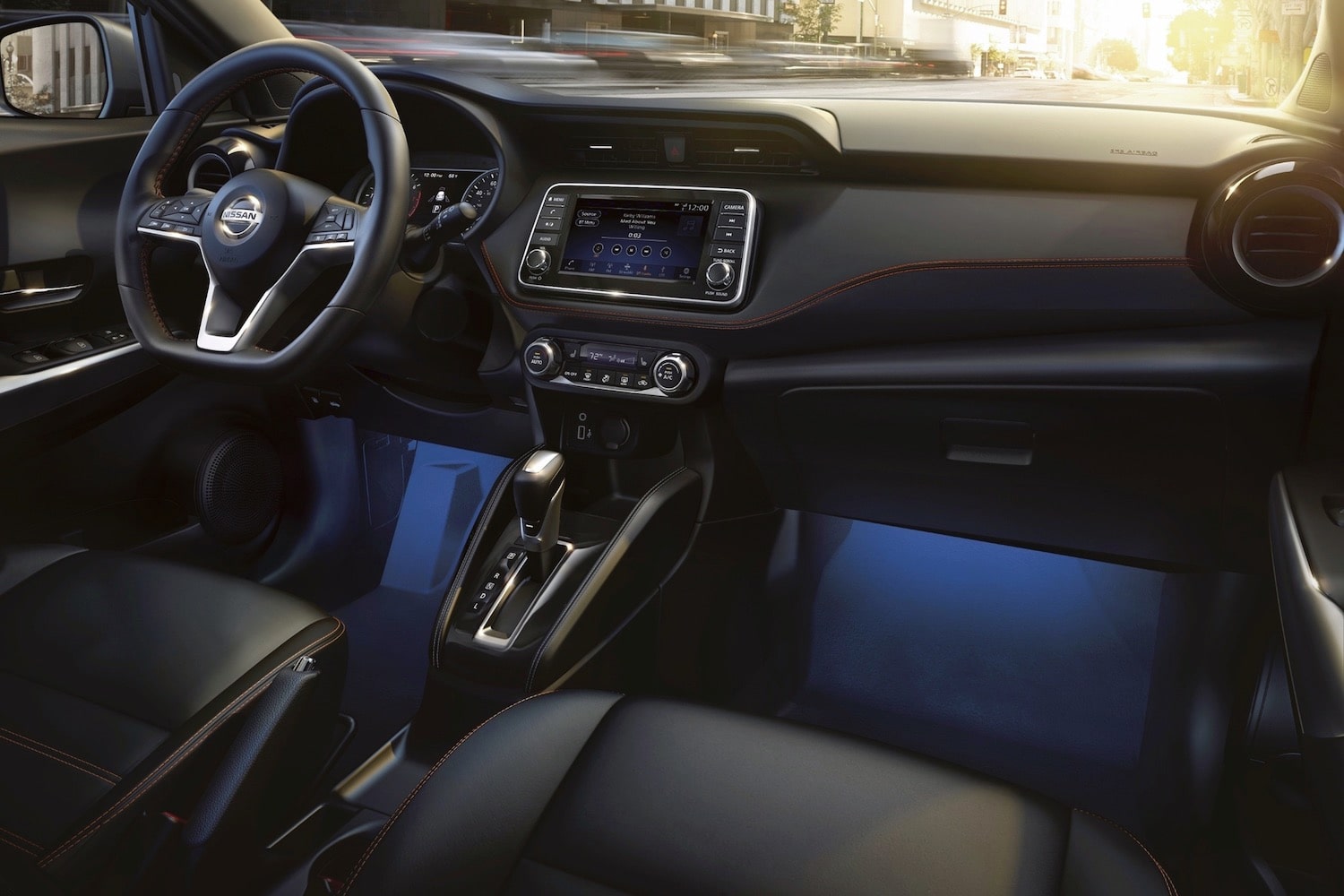 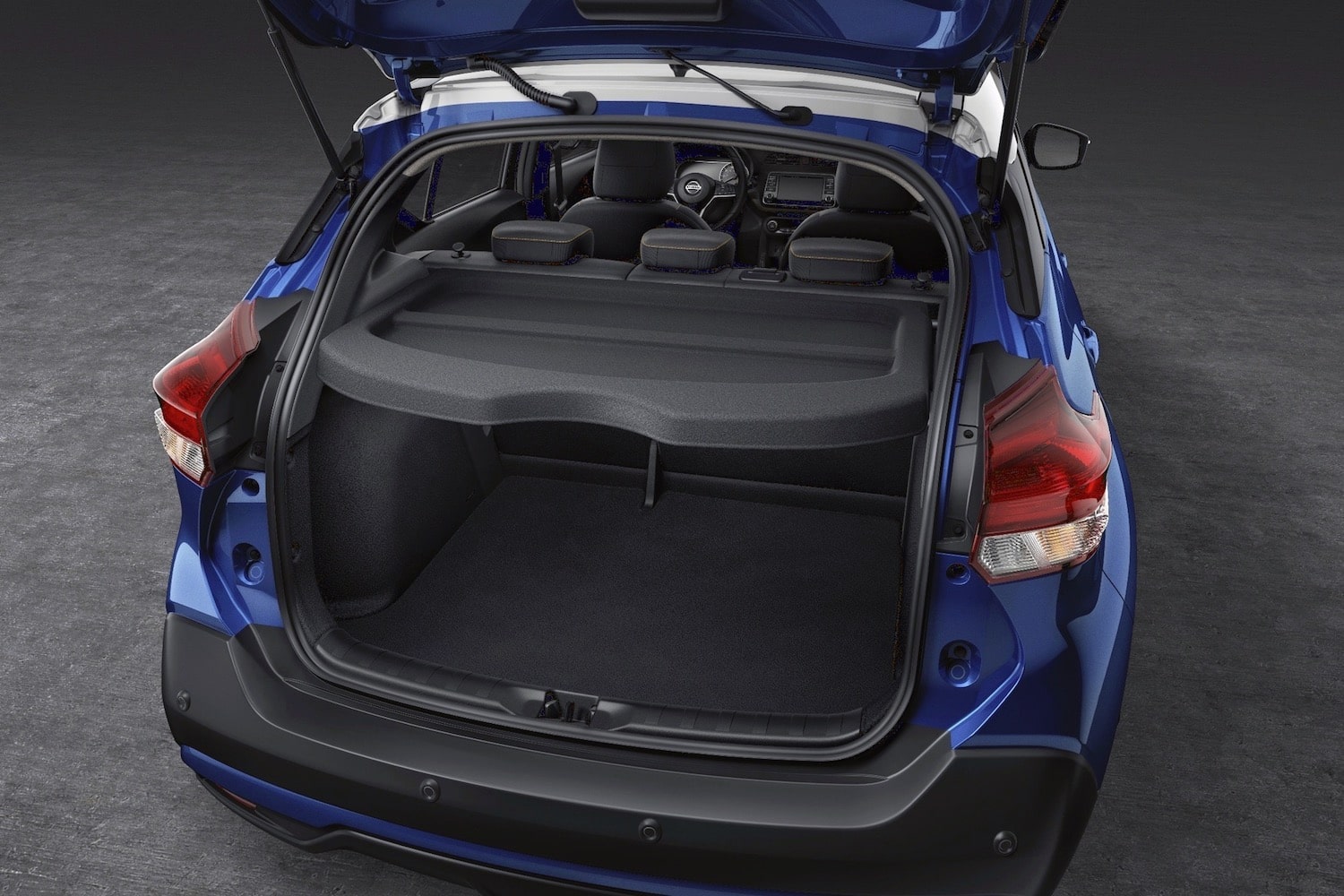 Surprisingly smooth for a vehicle that weighs less than 2,700 pounds, the Kicks absorbs most bumps with a muffled, reassuring thunk – no quiver in the steering column or flexing in the body.

Though it’s not the least bit sporting, the Kicks – thanks to its well-developed platform – turned confidently into corners with some body lean but no sloppiness.

Moreover, its steering was light and quick, feeling appropriate in a subcompact crossover.

Even with its gutless 1.6-liter four-banger – churning out an underwhelming 122 horsepower – the Kicks was not unpleasant to drive.

Tied to a continuously variable transmission, the little engine was smooth and almost zippy at city speeds.

Although the illusion began to fall apart over 40 mph, the engine still revved gamely to 6,000 rpm and the CVT even offered a couple of fake shifts.

The Kicks just couldn’t build much velocity no matter how hard it tried, requiring a sluggish 9.7 seconds to get to 60 mph, according to Car and Driver, and delivering overall fuel economy of 33 miles per gallon.

Like the vehicle itself, the black interior in my Kicks flashed a little flair – as well as a lot of plastic.

A relatively flat upper dashboard, for example, eased down onto a protruding mid dash stitched in a contrasting smooth material and trimmed in orange.

A seven-inch display screen served as the anchor for that area, providing buttons for the audio system – a convenience that many vehicles three times as expensive ignore.

In fact, while barely more expensive than the options on a typical high-end Benz or BMW, my Kicks had forward-collision warning, pedestrian detection, blind-spot warning, rear cross-traffic alert and lane-departure warning.

Only a church could give me more protection than that – and most won’t let me in.

Although the plastic door-panels betrayed the Kicks’ entry-level roots, the all-important black seats looked good in smooth black with orange “stitching” and pleats.

If you really needed to, you could fit a couple of lanky, demanding millennials in the back seat, plus their odd collection of luggage in the 25-square-foot cargo area.

Among the options on my car were the premium package, which included the Bose stereo, $1,000; the yawn-inducing black wheels, $495; and the two-tone paint, $250.

I think I might like the Kicks a bit more if it came standard with cardboard cutouts of Keith and Mick in the seats.

But even without the eternal bad-boys, the Kicks – like most of the vehicles in the subcompact segment – offers a lot of value, a rarity in these days of $75,000 pickups.