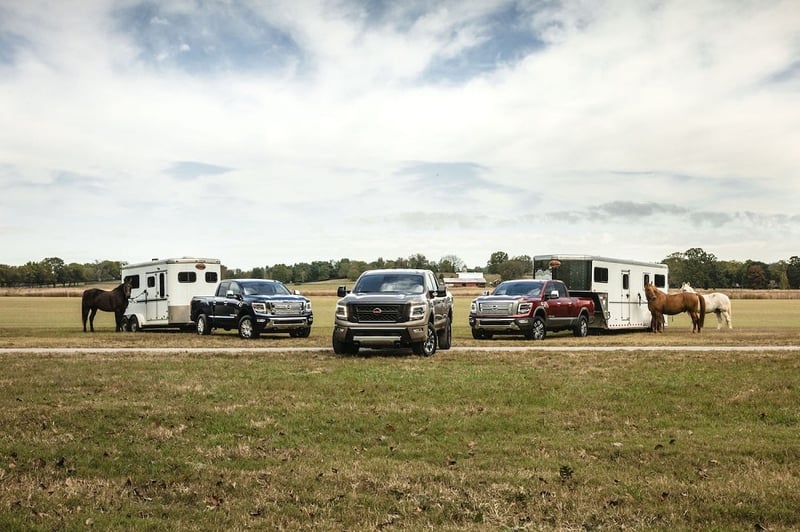 Determined Nissan has no intention of giving up on its slow-selling Titan pickup, a full-size brute still trying to find its niche in the highly profitable big-pickup segment.

The Japanese automaker sought to underscore its truck-commitment with a ride-and-drive event last week in Midlothian for the freshened 2020 Titan.

As you may recall, the Titan arrived in the U.S. 17 years ago as a capable full-sizer slightly out of step with the Detroit-dominated segment.

“2020 is the year of reinventing the Titan family,” Nissan spokesman Steve Parrett said at the Midlothian event.

It will face challenges, though.

Despite a major restyling and upgrades in 2015, the Titan has failed to deliver solid sales in the growing, highly profitable full-size segment dominated by the Detroit Three’s long-time pickups.

In fact, since the restyling five years ago, Titan’s sales have dropped about 40 percent and remain at the bottom of the segment, ruled by Ford’s F-series trucks.

You should be able to spot the new Titan mostly from its restyled, sleeker front end, which benefits from a more polished grille and new LED headlamps.

The 2020 Titan is available in two basic body styles -- the extended cab model with rear-opening half-doors and a 6.5-foot pickup bed or a full crew-cab with a shorter 5.5-foot box.

Leading off the lineup is the base S, followed by the SV, the off-road-capable Pro-4X and the SL and Platinum Reserve models – both of which are crew-cabs only.

As in previous years, the Titan will be available as a conventional light-duty full-size truck or the larger, tow-oriented Titan XD, which is three inches taller and nearly 15 inches longer than standard Titans.

Although Nissan touted the bigger, more substantial Titan XD’s towing capacity of up to 11,000 pounds, that is less than many of the Detroit Three’s trucks.

However, Nissan doesn’t characterize the XD as a heavy-duty pickup – just a somewhat larger, stronger version of the Titan (which can tow up to 9,370 pounds).

Moreover, for 2020, Nissan has dropped its optional 5-liter Cummins diesel V-8, an engine that mostly failed to deliver heavy-duty capabilities.

Nonetheless, Nissan believes the 5.6-liter gas V-8 – the only engine now available in the Titan -- can be competitive in the tough full-size pickup segment.

“We think the XD can comfortably meet most buyers’ towing needs and drive better than any of the (competition’s) heavy-duty trucks,” said Shane Heidemann, Nissan’s market ability specialist.

Though the 5.6-liter V-8 – with 400 horsepower and 413 lb.-ft. of torque -- is the only engine available in the Titan, Nissan notes that it is the most powerful base engine in the segment.

All of the trucks feature enhanced technology, with a high-resolution 9-inch touchscreen now available that includes standard Apple CarPlay and Android Auto, as well as an internal Wi-Fi router that will allow rear-seat passengers to stream their content.

“We think some of them will be first-time full-size buyers,” Schiftan said.

For the event in Midlothian, Nissan brought two well-equipped Pro-4X trucks and two XD Platinum Reserve models. The trucks varied in weight from about 5,500 pounds to 6,000 pounds.

The dark-sand colored Pro-4X truck we drove was responsive and torquey with Titan’s typical throaty exhaust note and lively acceleration.

Our four-wheel-drive truck rode firmly with the usual slight vibration from its off-road style tires, but both were entirely acceptable even at speed.

Incidentally, we managed to get the truck thoroughly stuck in the slick mud of a shallow creek at an off-road park that Nissan invited us to try – despite a locking rear differential and hill-start assist.

Most of that, however, could probably be attributed to our inexperience with off-roading.

We did better in the Titan XD towing a 35-foot travel-trailer that weighed nearly 10,000 pounds.

Though the 5.6 V-8 had to work some on hills, it didn’t struggle and the truck’s stiff, fully boxed frame provided flex-free performance and a surprisingly good ride.

“A lot of people buy more truck than they really need to tow things and then pay for it with a rough ride when they’re not towing,” said Heidemann, the Nissan market specialist. “We think the XD provides great capability without the rough ride and huge size of the heavy-duty trucks.”

All of the trucks – which come standard with a five-year, 100,000-mile warranty -- should be arriving at dealerships this quarter. 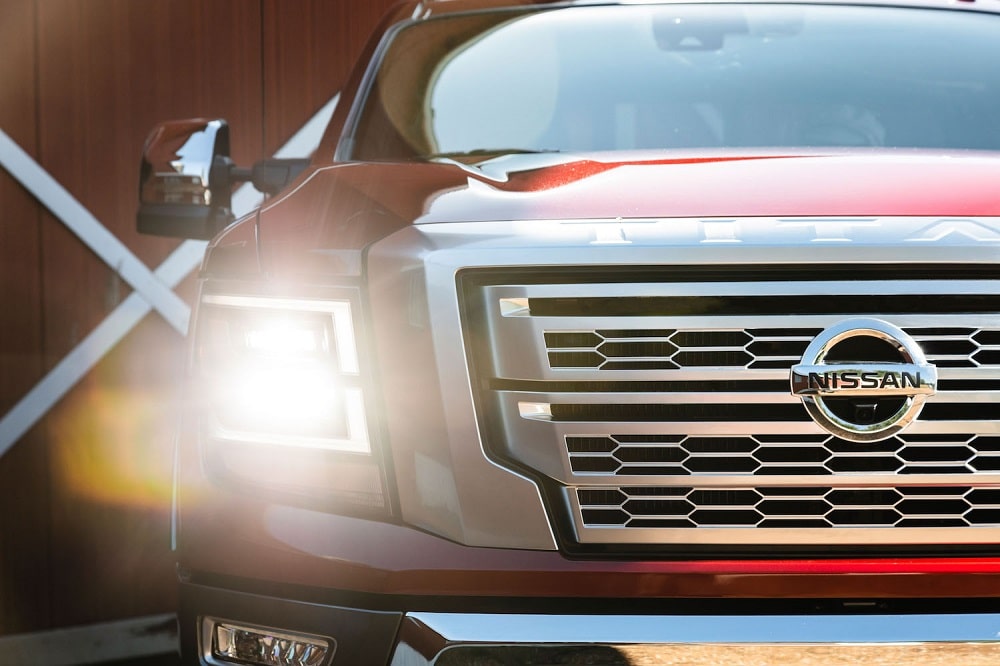 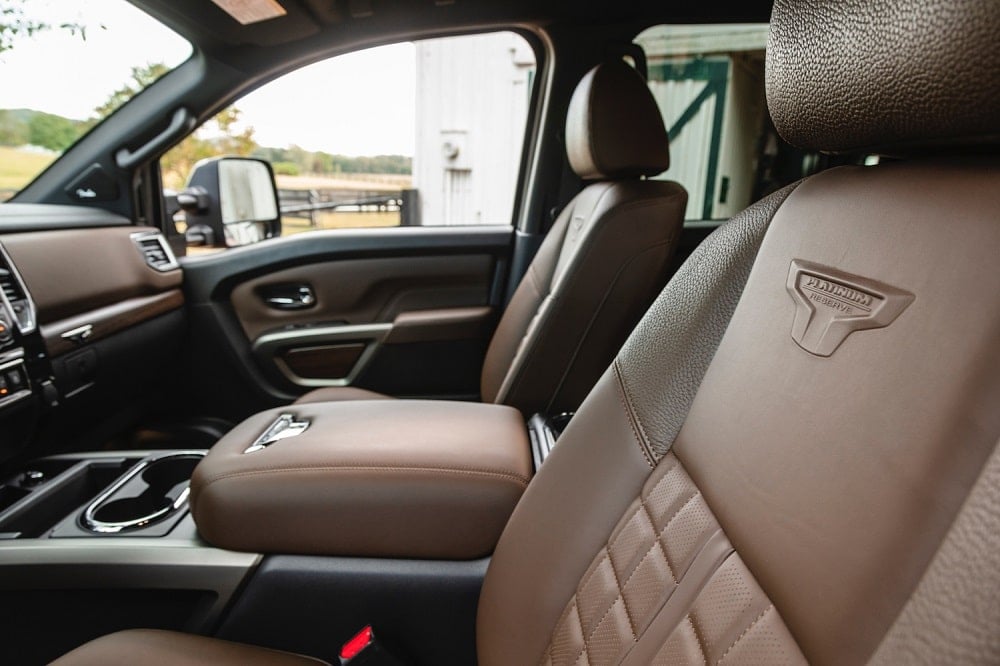 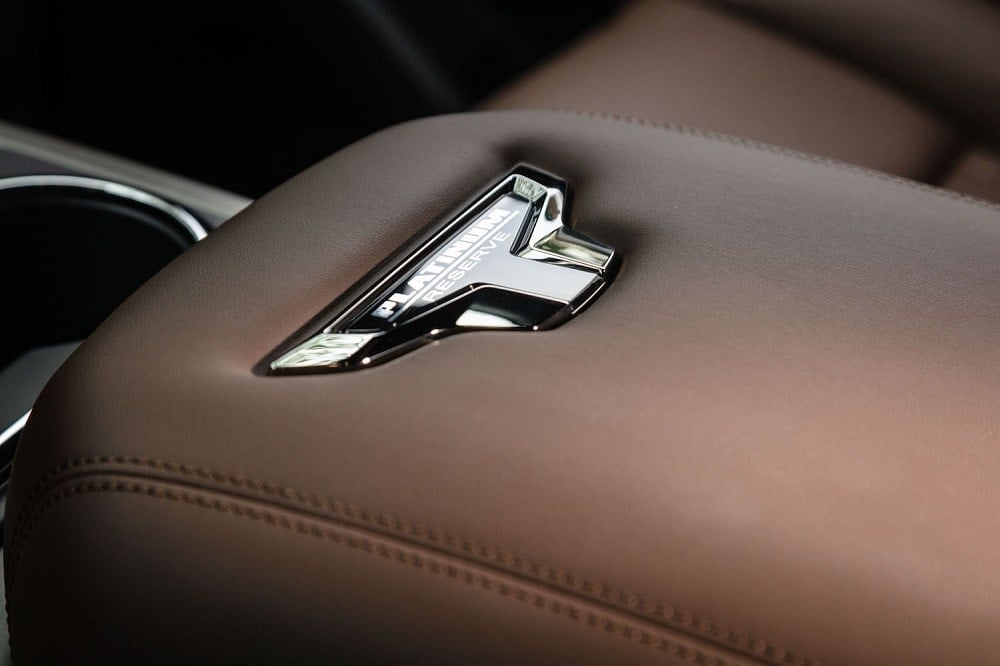 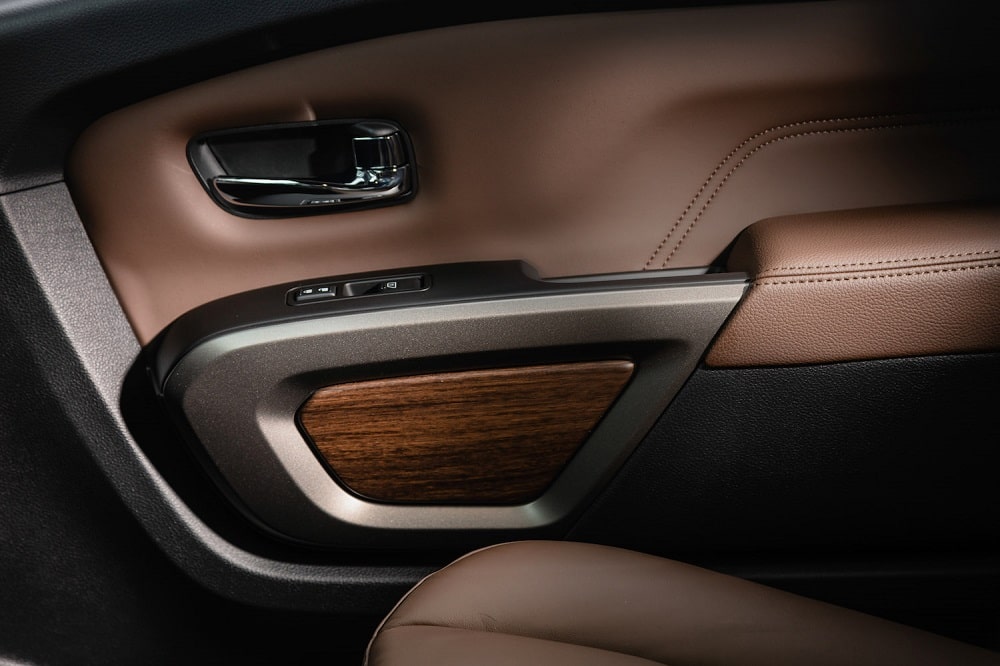 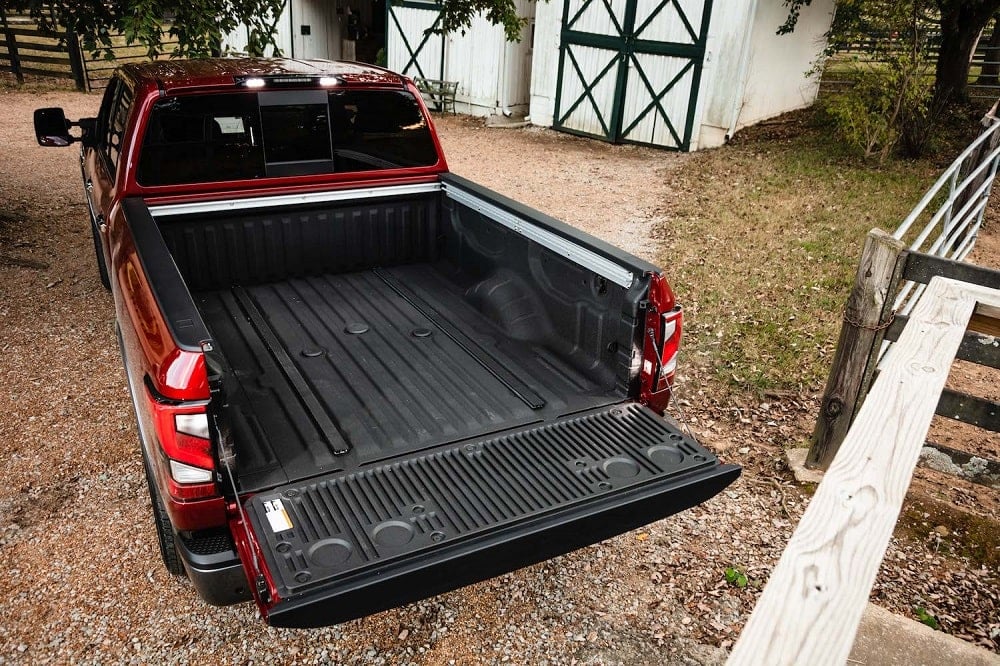 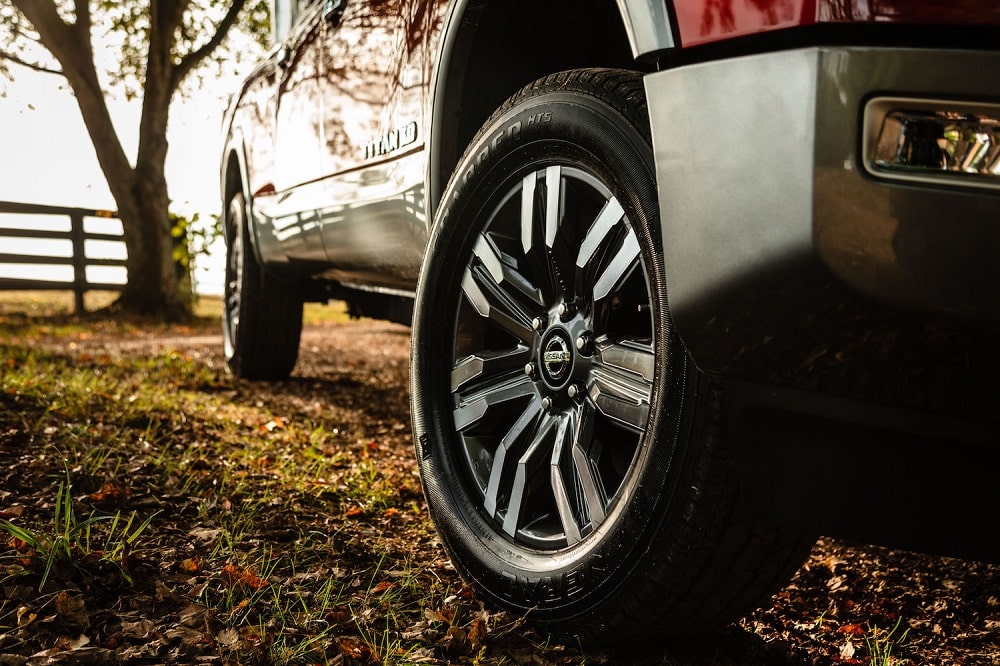 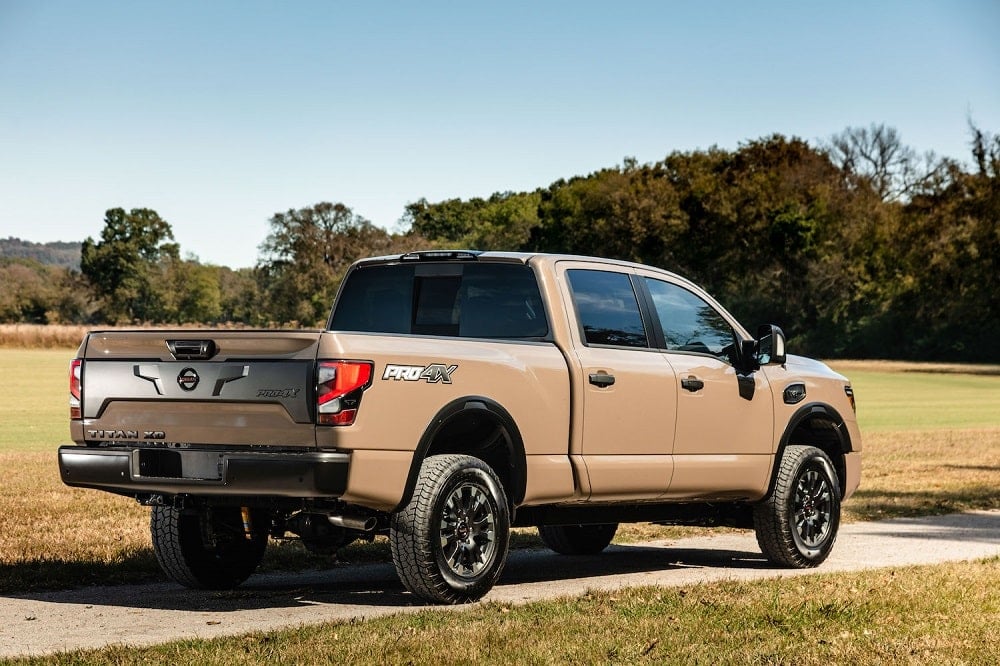 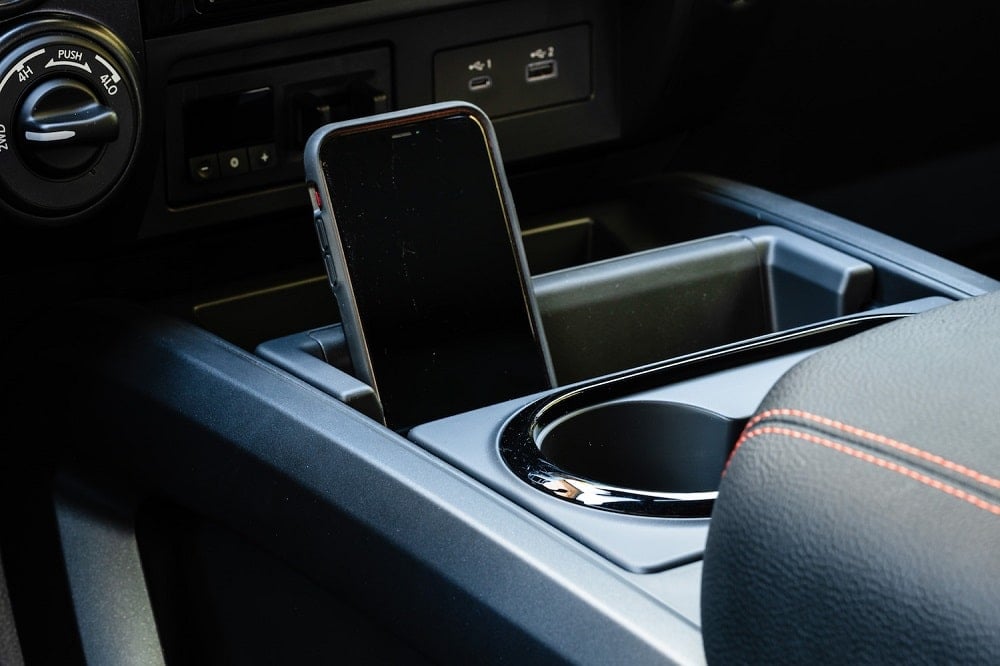 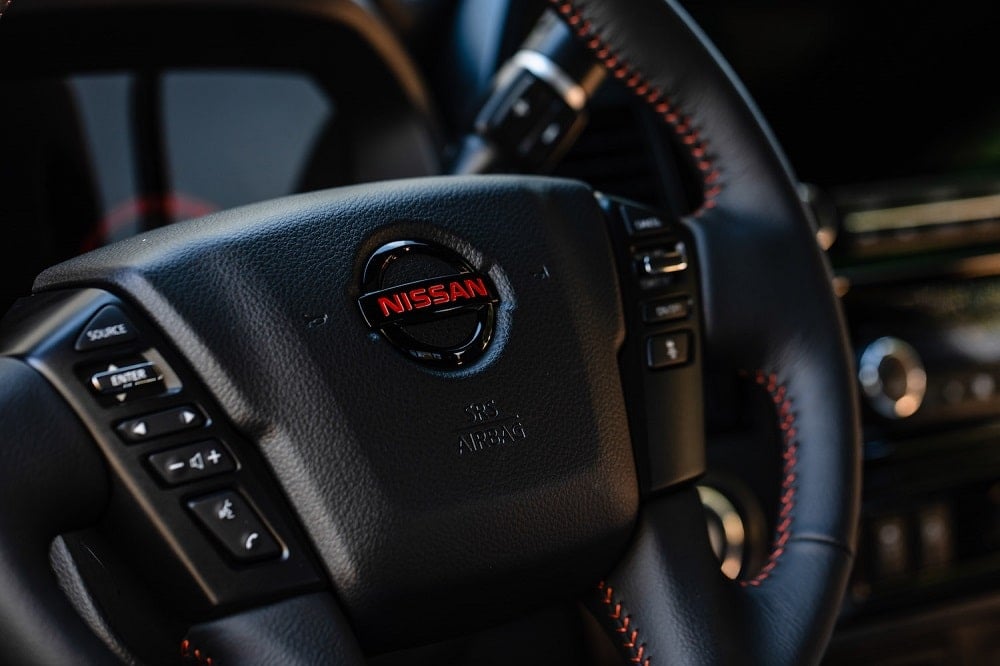 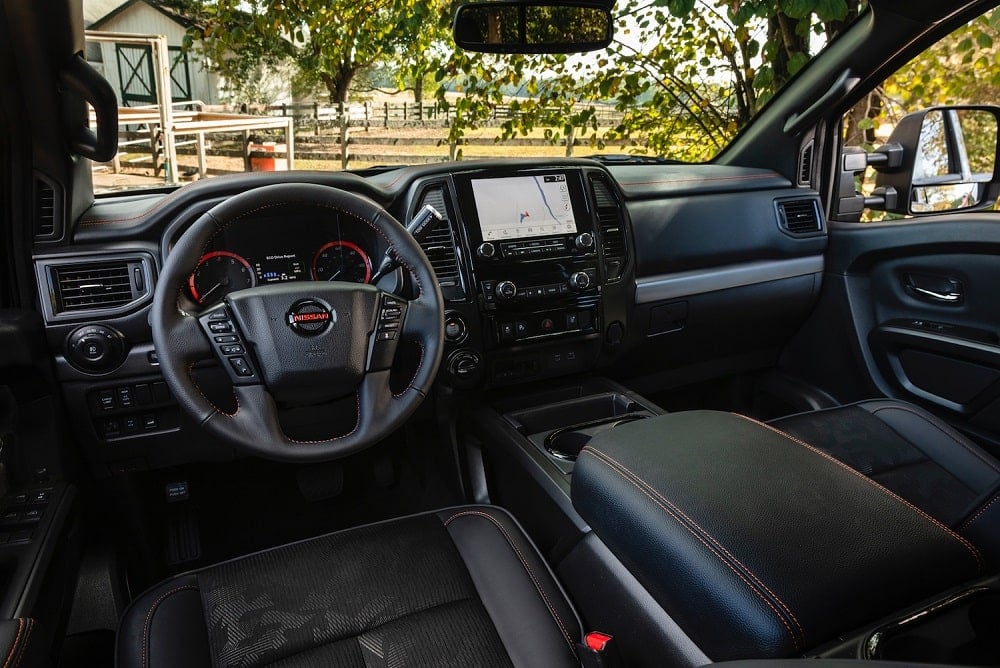 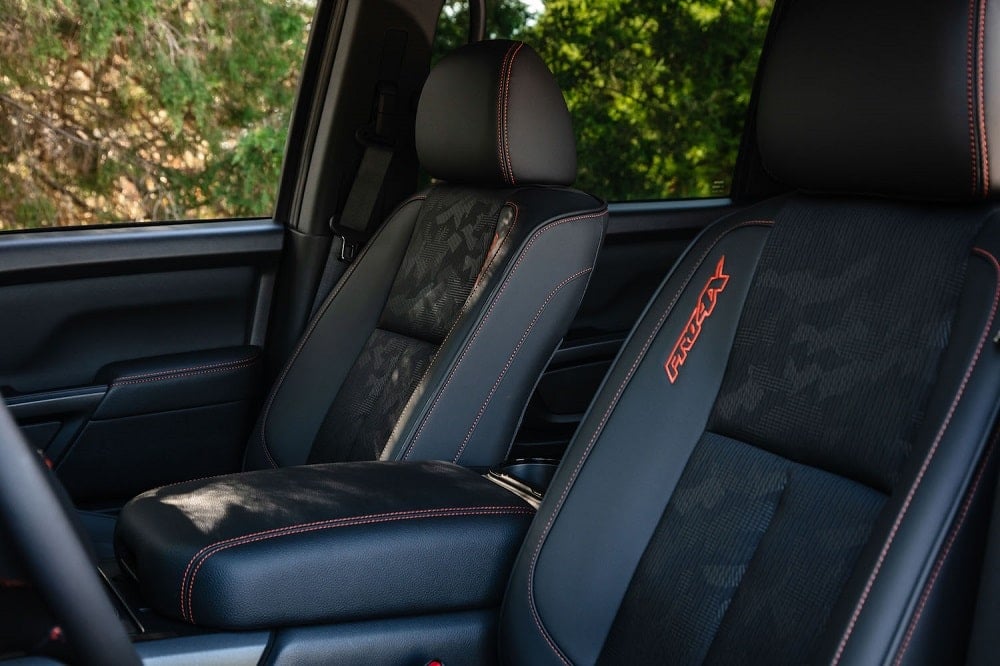 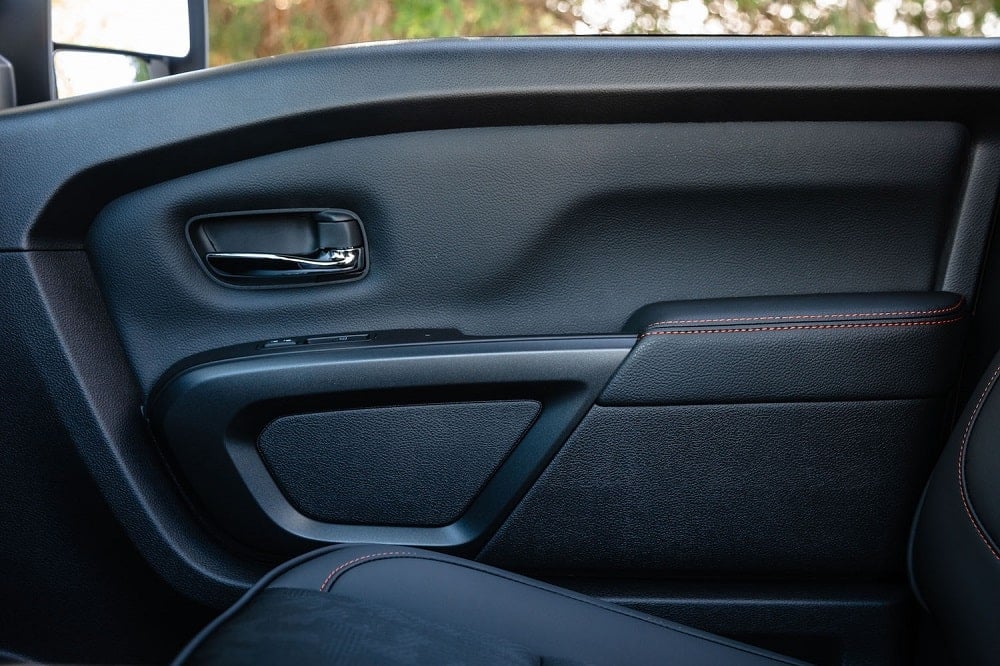 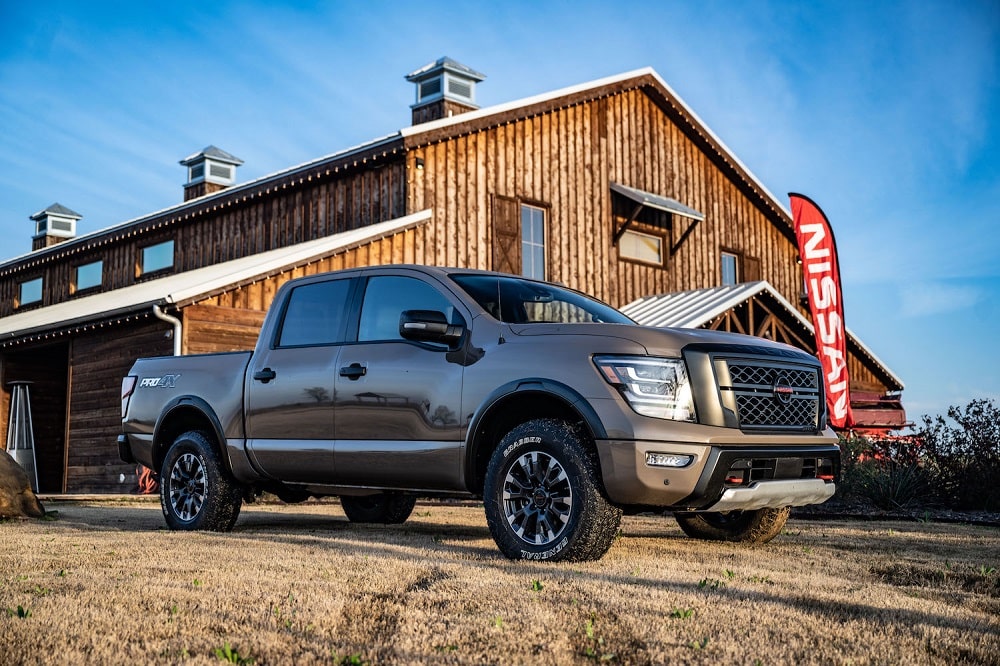 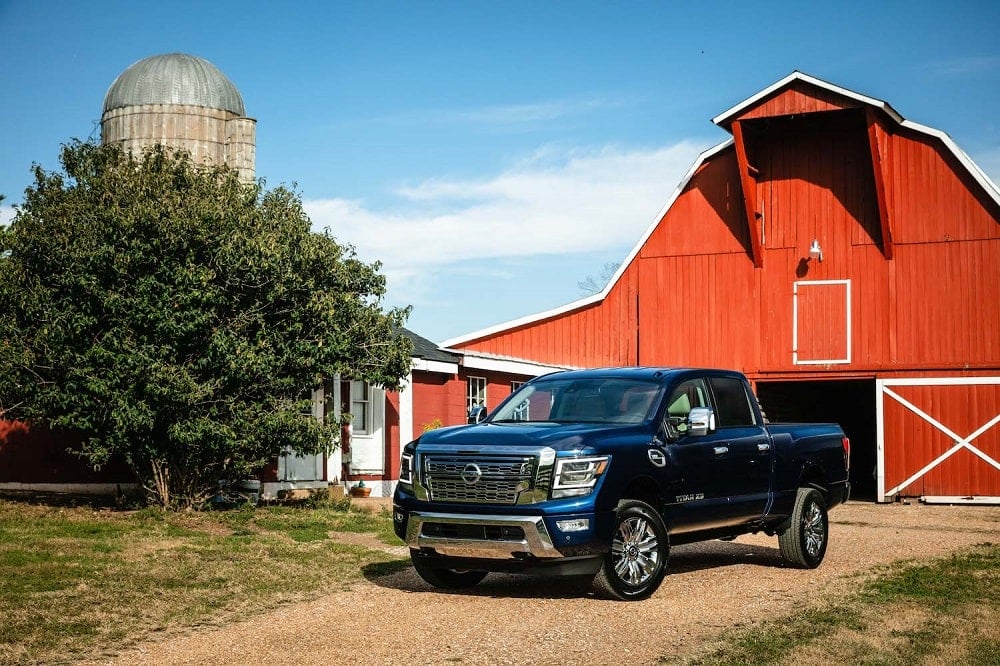 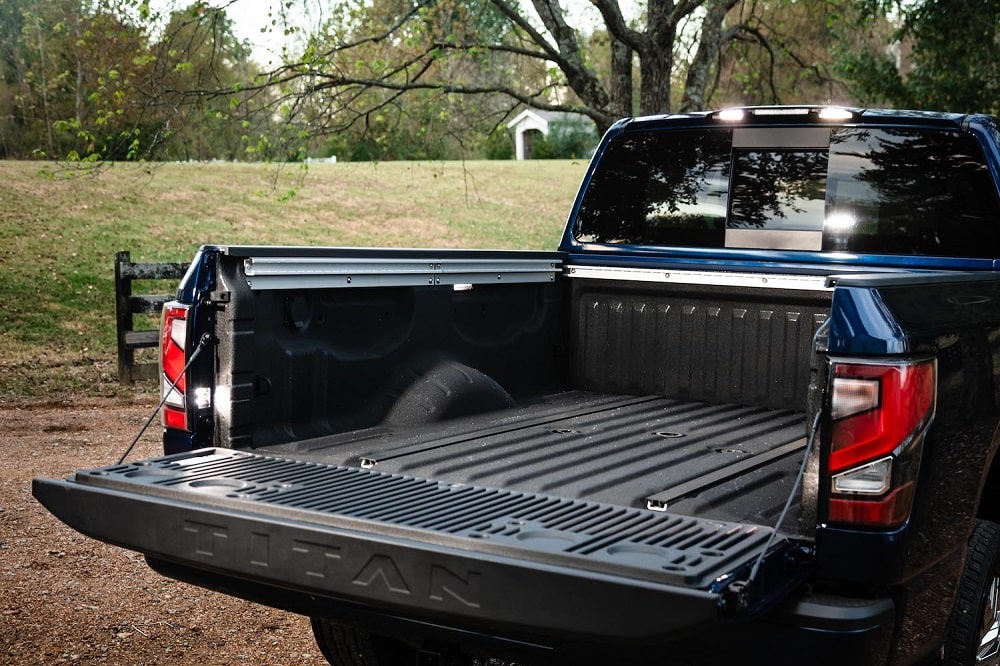 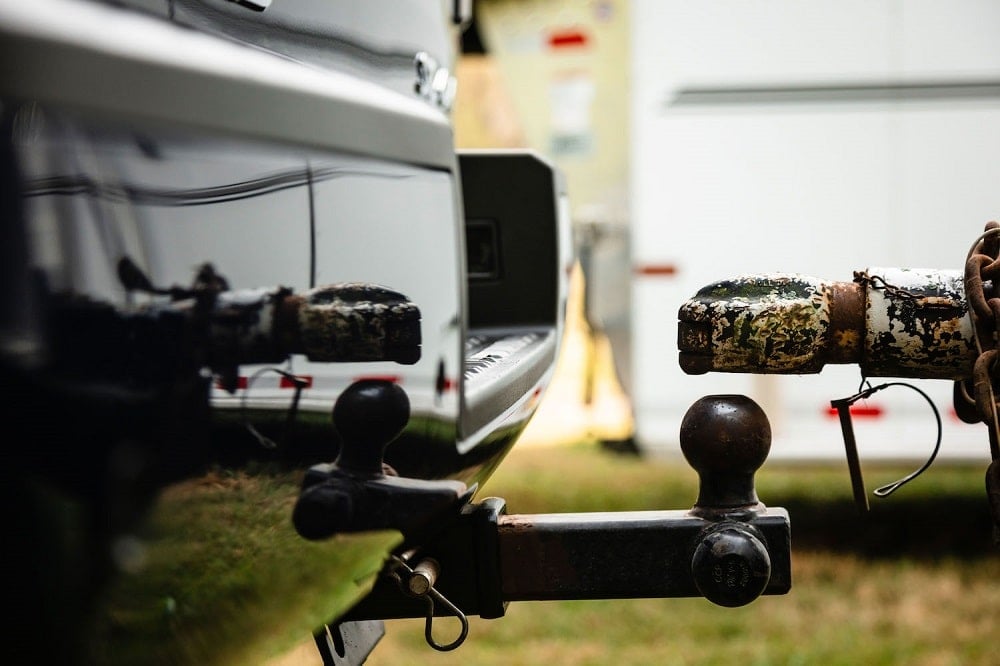 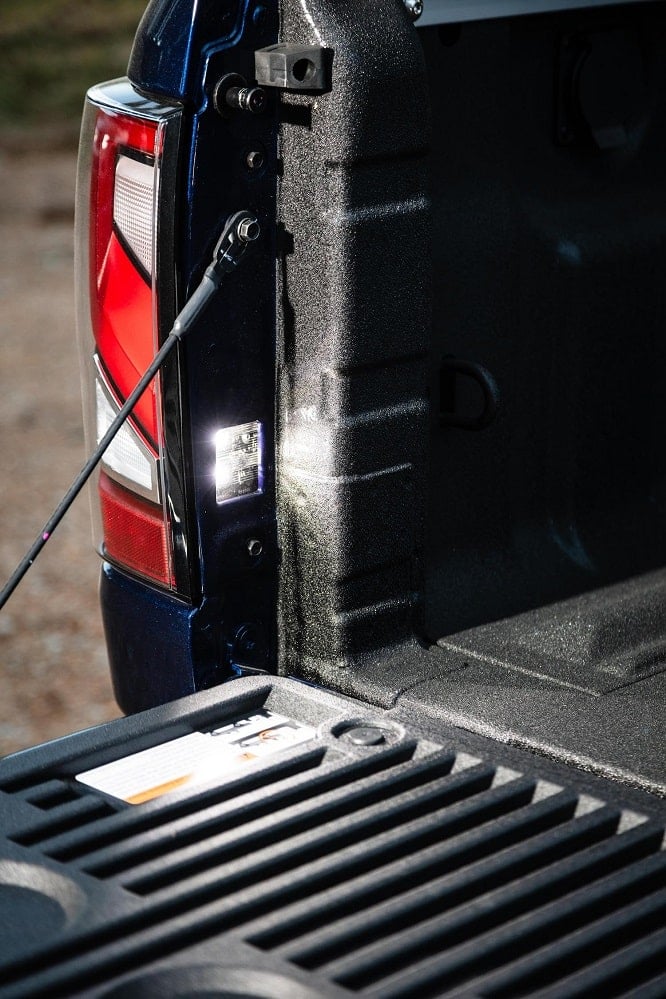 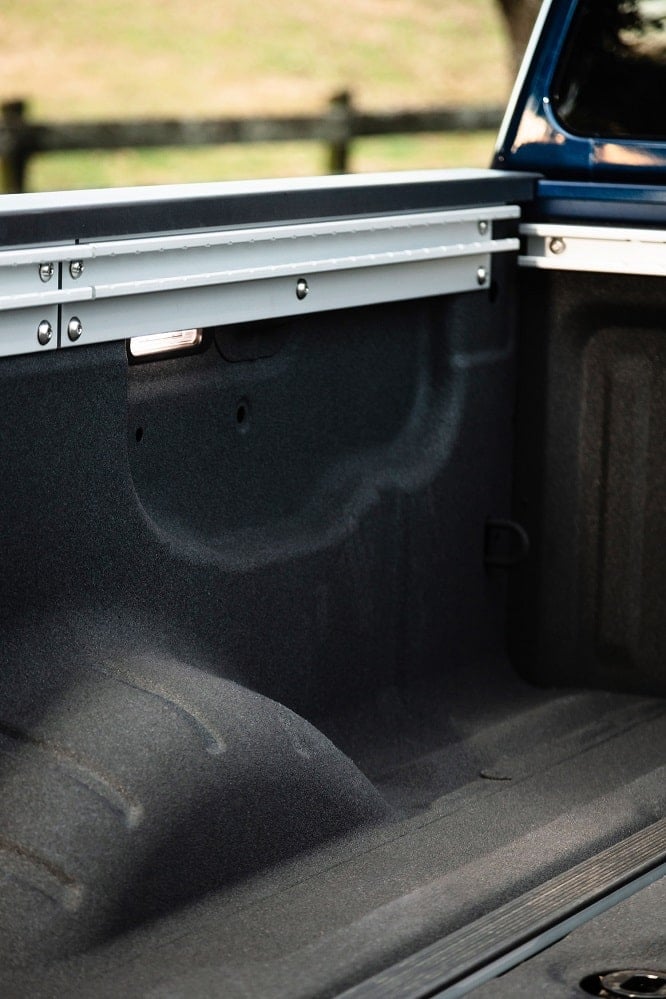 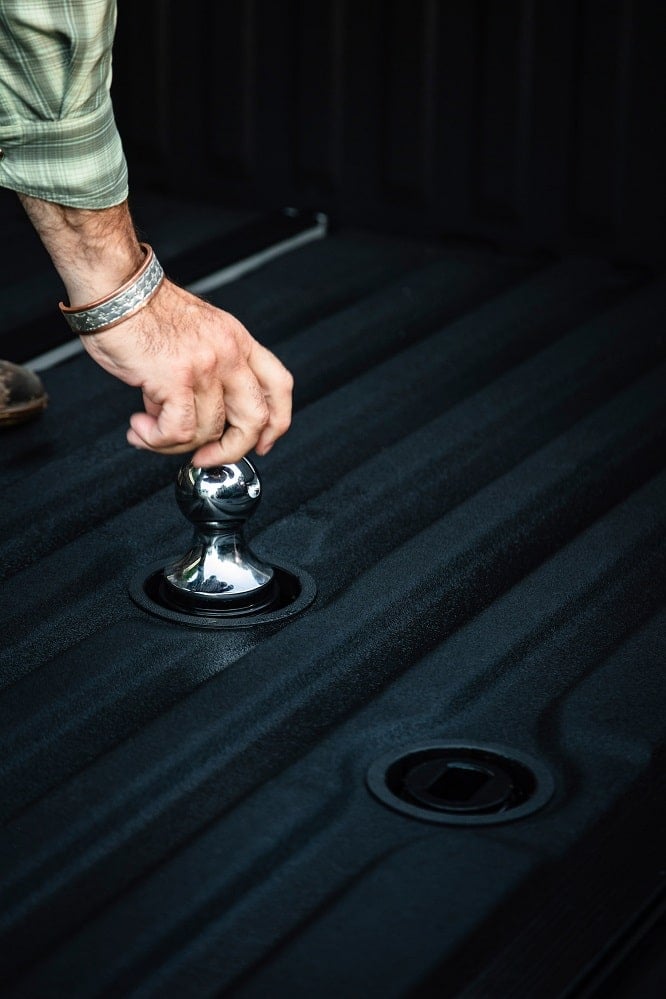 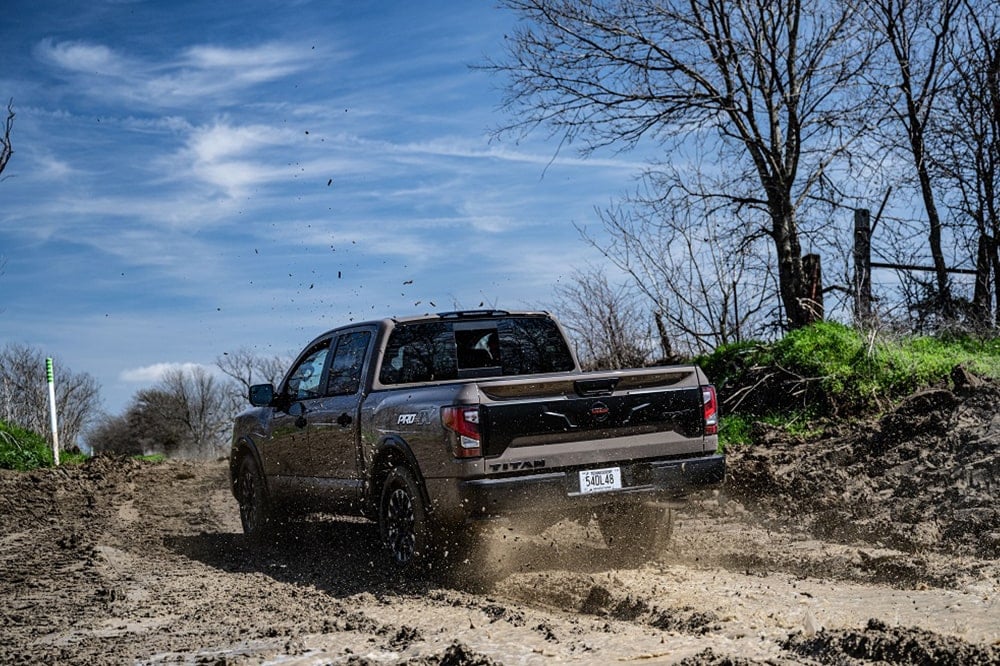 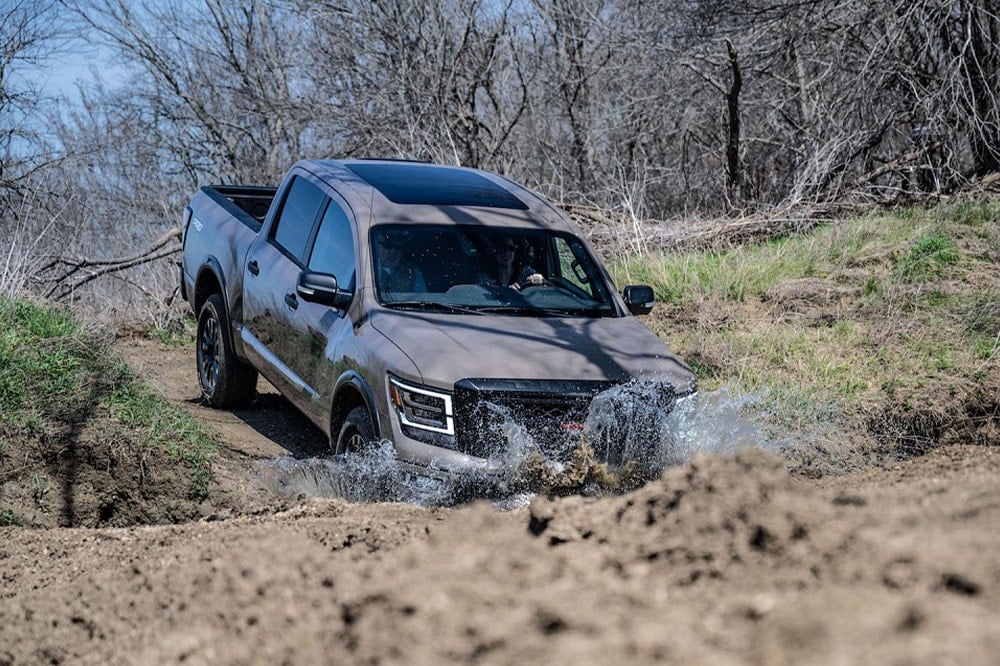 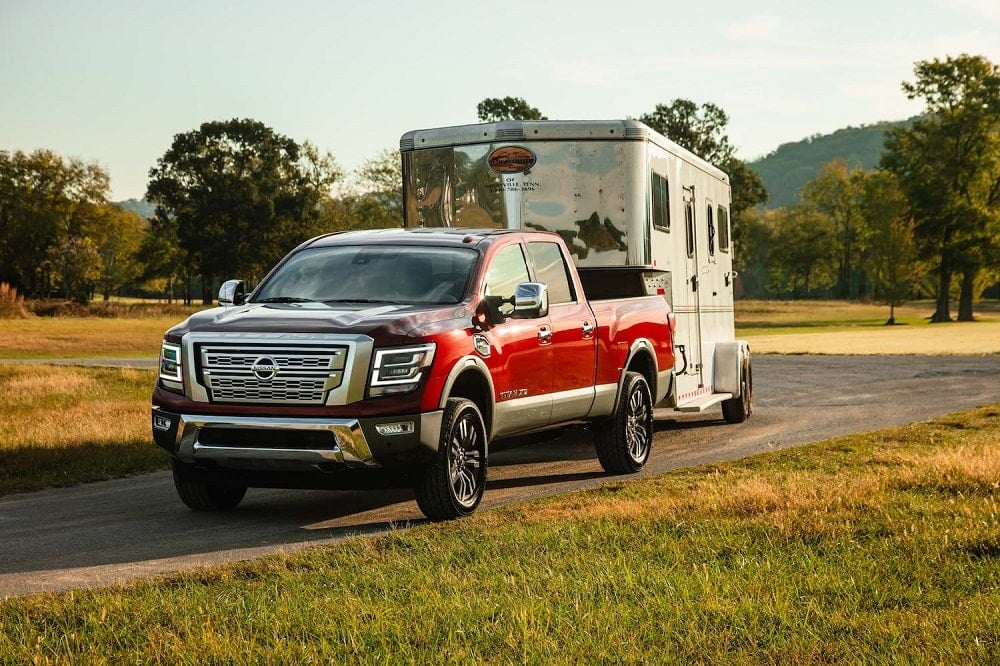 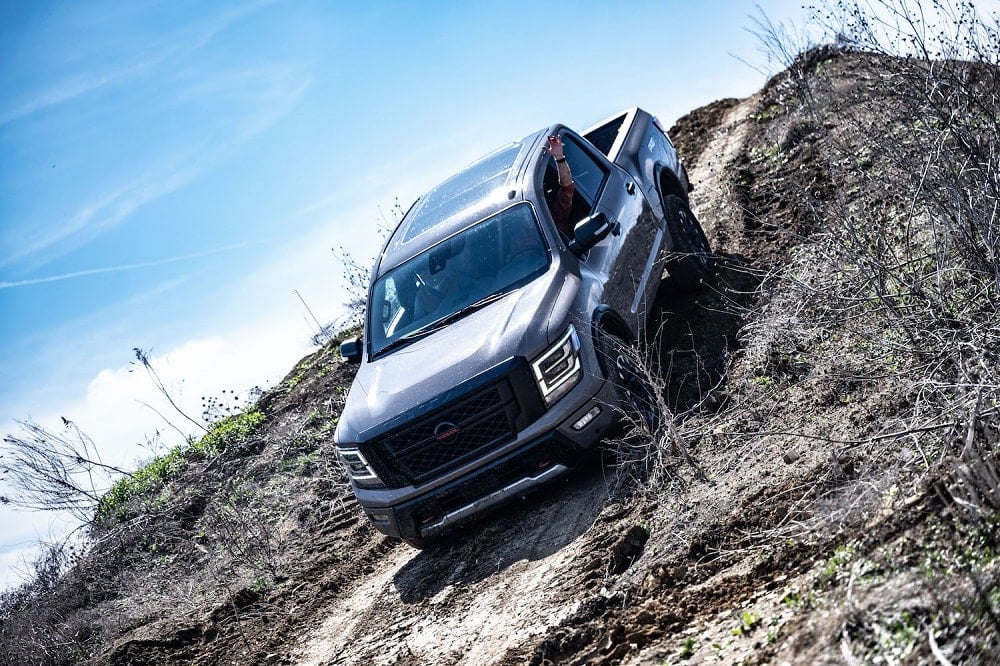 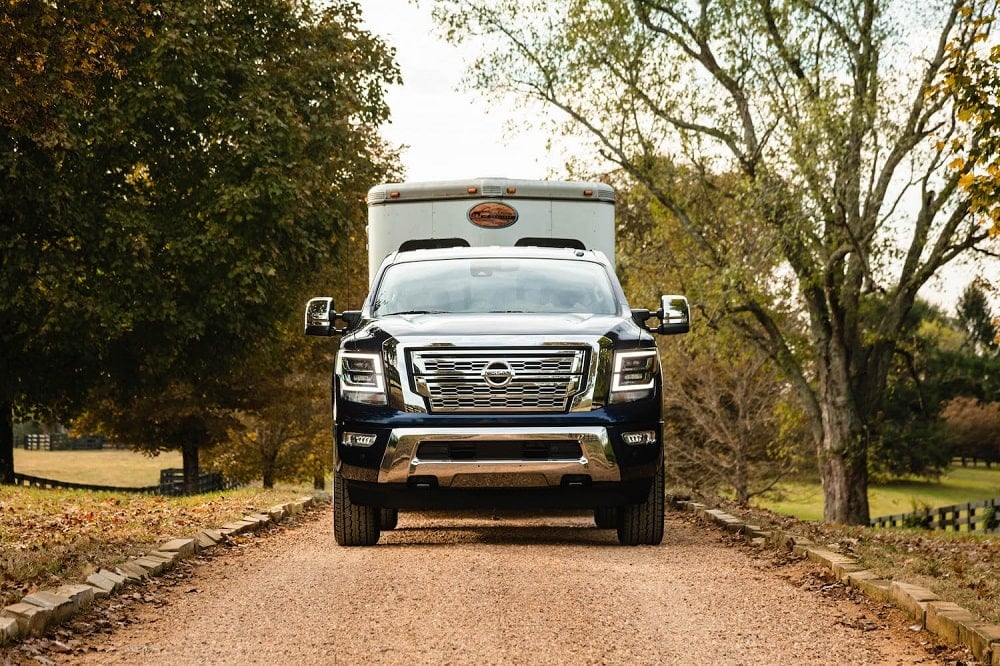 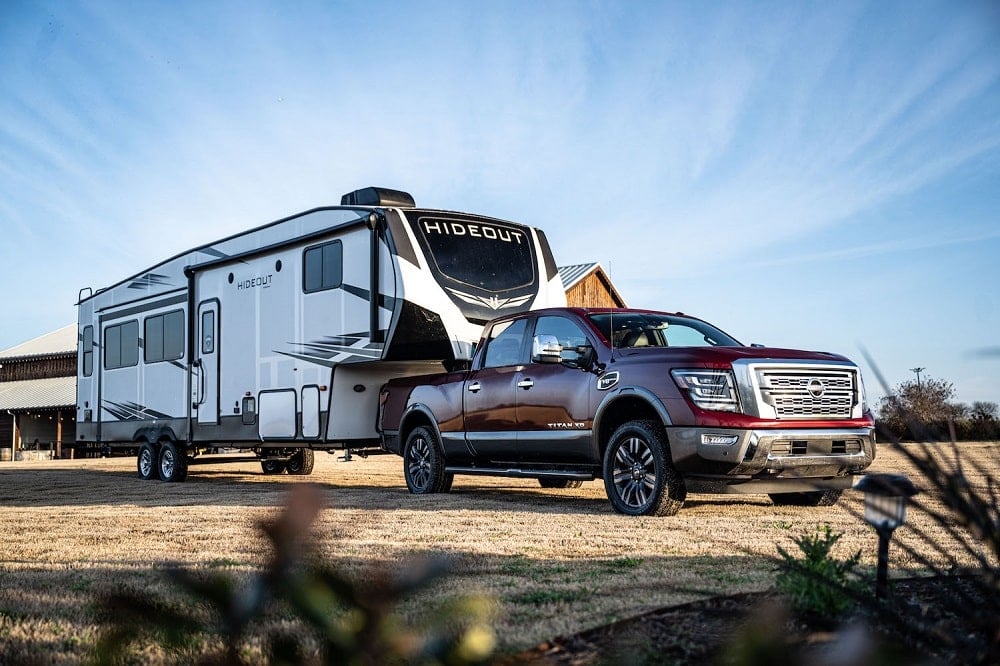