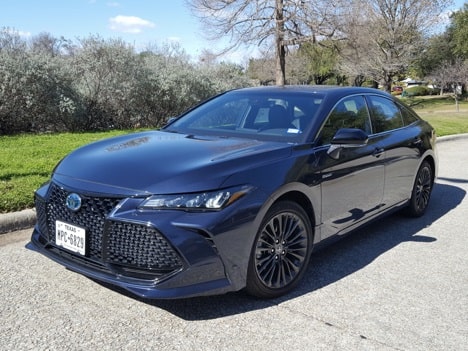 Remember when Toyotas seemed scarcely bigger than an afterthought, with tinny doors and tiny backseats?

Road biscuits, we called them.

Small as they were, though, those fragile-looking but durable compacts drove Toyota to new heights – and ultimately much bigger cars like the 2020 Avalon Hybrid.

You won’t find a shred of old Corolla in the full-size Avalon, which has a back seat large enough to comfortably accommodate three large Americans and their lap-dogs – or belt-buckles, if they live in Texas.

As you probably know, the Avalon is Toyota’s largest sedan, a 3,700-pound front-driver built on the same commendable platform that accommodates the mid-size Camry.

If you don’t recall seeing one lately, they booked only 28,000 sales last year – less than 10 percent of those of the Camry.

The bluish-gray model I had recently was also a hybrid (a $1,000 premium over a regular gas car), making it even rarer, and its unusual mix of attributes didn’t end there.

Although a hybrid, built primarily to be a full-size sedan with fuel economy of 43 miles per gallon, my Avalon was an XSE model with a fairly sporting suspension – a hot-rod hybrid from Toyota?

Not quite, but the Avalon sported enough seemingly different stuff to make it interesting.

Somehow, all the instruments in the Avalon’s little band played pretty harmoniously most of the time.

Of course, being a modern Toyota, the Avalon wore a laughable grille that sort of resembled the one in the kitchen at Buck’s Hamburgers – and just as black.

As if that weren’t enough, the grossly exaggerated grille was flanked by fake air intakes bigger across than some trash-can lids, and nowhere near as functional.

Large, slender three-element headlamps eased some of the pain up front, cutting jauntily back into the fenders with a slight scowl.

The view improves considerably once you get past the bulky front end, with sculpting around the door handles and down low tightening the sides.

Initially, I wasn’t sure what to make of it all – a large Toyota hybrid sedan with trendy and very tiresome dark wheels and a spoiler on the trunk?

Like many of Toyota’s larger hybrids, the Avalon relies on a 2.5-liter four-cylinder engine supplemented by two electric motors and generating 215 quiet horsepower.

The powerplants spun a continuously variable transmission connected to the front wheels and programmed to fake a couple of “shifts.”

With instant-on torque, the electrics helped the gas engine launch the large Avalon smoothly and with a bit of authority.

Thirty miles per hour arrived almost instantly. Beyond about 50, though, the surge flattened considerably, accompanied by some CVT bray/moan.

Still, the Avalon could accelerate to 60 in 7.8 seconds, according to Car and Driver, which is plenty adequate for most urban driving.

Likewise, the steering felt numb but was precise, reasonably quick and seemed well-suited to the car.

While a bit firmer than some Avalon buyers might expect, the semi-sporty suspension gave the big sedan some agility in traffic and yet soaked up bumps without bounces or shudders.

I’m still mulling over the market for an Avalon like this. Is anyone looking for a large hybrid sedan with average performance and a sporty suspension?

Beats me, but the car’s black interior offered some inviting Lexus touches, though it was kind of heavy on plastic for a $42,000 vehicle.

A deep, broad upper dashboard, for example, slid flatly onto a mid-dash with a slight curve in it and trimmed in plastic that looked like aluminum.

Those nice design touches, though, were somewhat overshadowed by a 9-inch video screen that dominated the front of the sedan, but at least provided knobs for the good-sounding JBL sound system and tabs for the climate control.

Meanwhile, the seats in the Avalon flashed some Lexus-like flair with perforated centers and suede panels on the bolsters.

As I mentioned, too, the car’s back seat spreads out with expansive leg- and head-room.

The only substantial option on my Avalon was the premium JBL audio system, a $1,720 option.

At one time, the Avalon seemed a good alternative to a Lexus ES 350, since both are built on similar solid platforms. But the base price on the ES is only about $500 higher than the Avalon.

However, if you’re looking for a full-size sedan with excellent economy and a bit of green in it, the unusual Avalon Hybrid might be worth considering.

Your old hippie cousin, Onyx in Austin, should be impressed.

Click here for a video review of the 2019 Avalon.