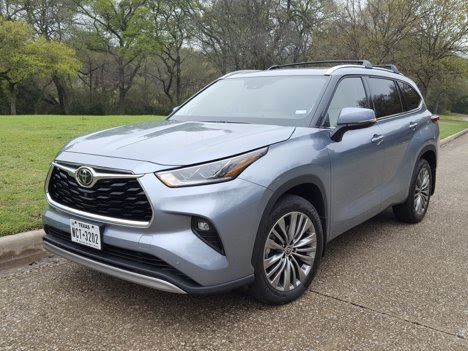 Everything but my paycheck seems to be getting bigger.

Mid-size pickups now stand shoulder-to-shoulder with full-size trucks from a decade or so ago, while some compacts – formerly about as spacious as a good-sized cardboard box – stretch out like mid-size sedans.

So, I guess I shouldn’t be all that surprised at how large the all-new 2020 Toyota Highlander Platinum looks, its blunt front-end brushing against me at about mid-chest.

Or maybe not. Oddly, as I discovered, the dimensions of my hefty new Highlander were barely larger than last year’s bulky model.

Quite possibly. But crafty Toyota made the new Highlander look like more by giving it less – cleaning up the polarizing grille on last year’s model that resembled a stack of spoon-handles.

Although the front of the silver-blue Highlander Platinum I had still looked about as puffed-up as a politician at election time, it lacked much of the thick exaggeration of previous models.

Huge new headlamps, though, kind of kept the old vibe going, cutting deeply back into the front fenders and capped by a long, sculpted hood.

And the sides were a symphony – or cacophony – of lines, with one slicing through the door-handles and a second one down low curving up around flared-out rear fenders. 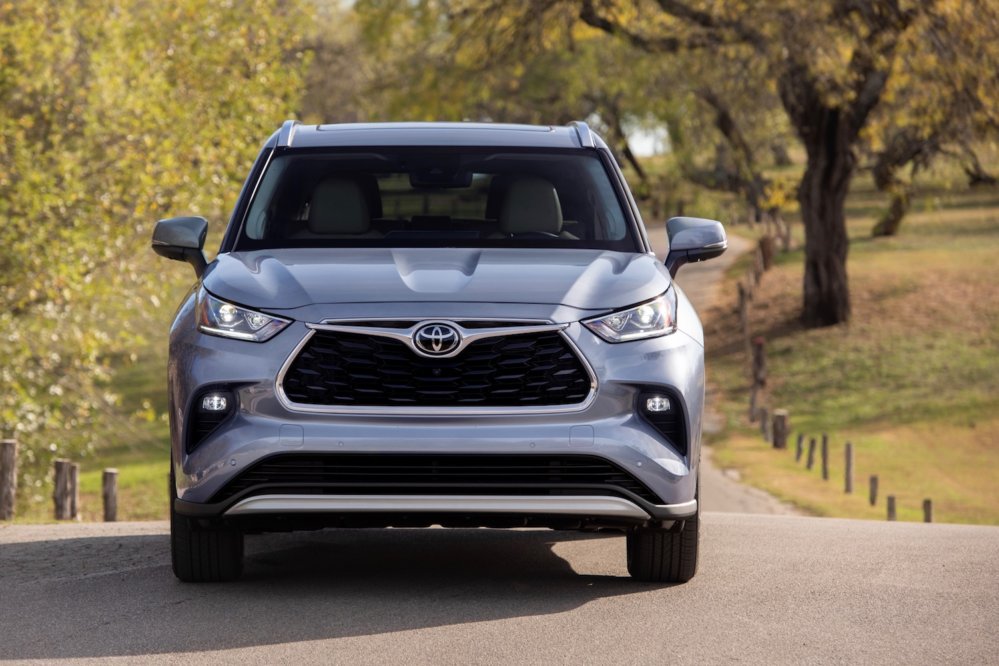 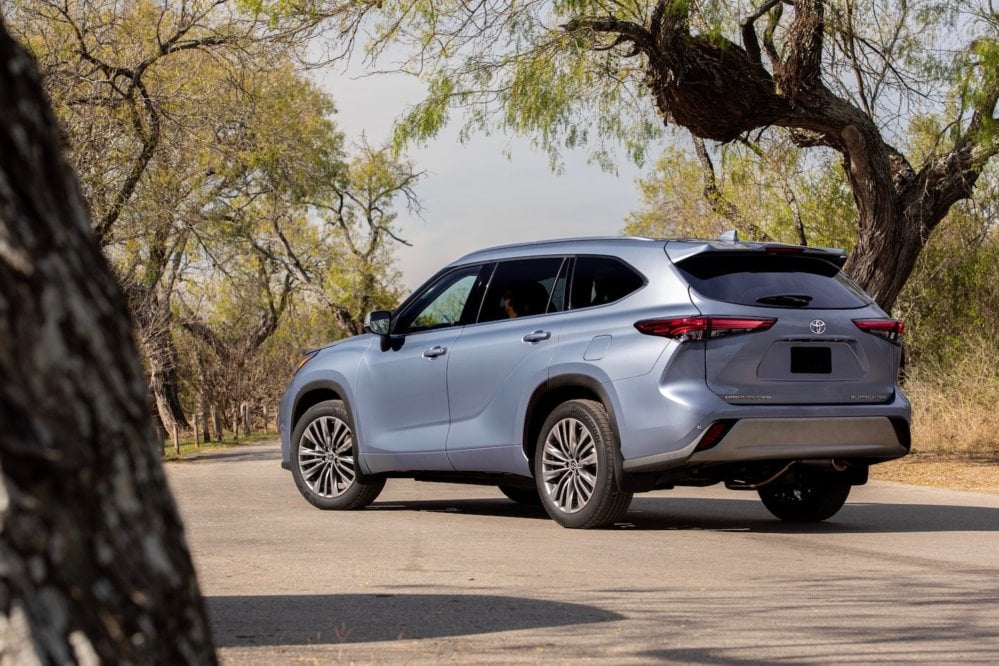 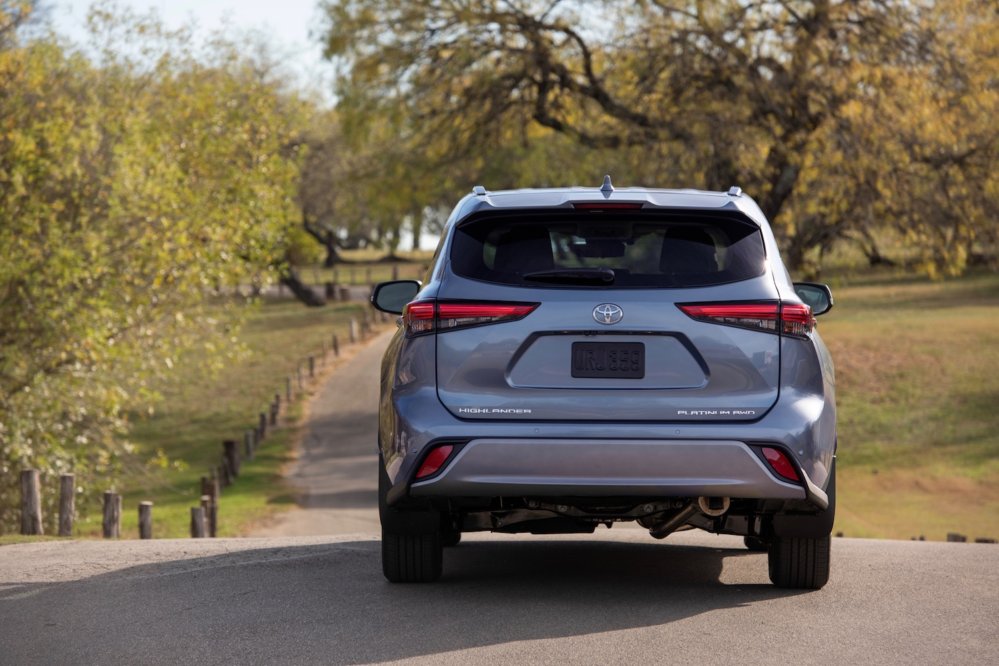 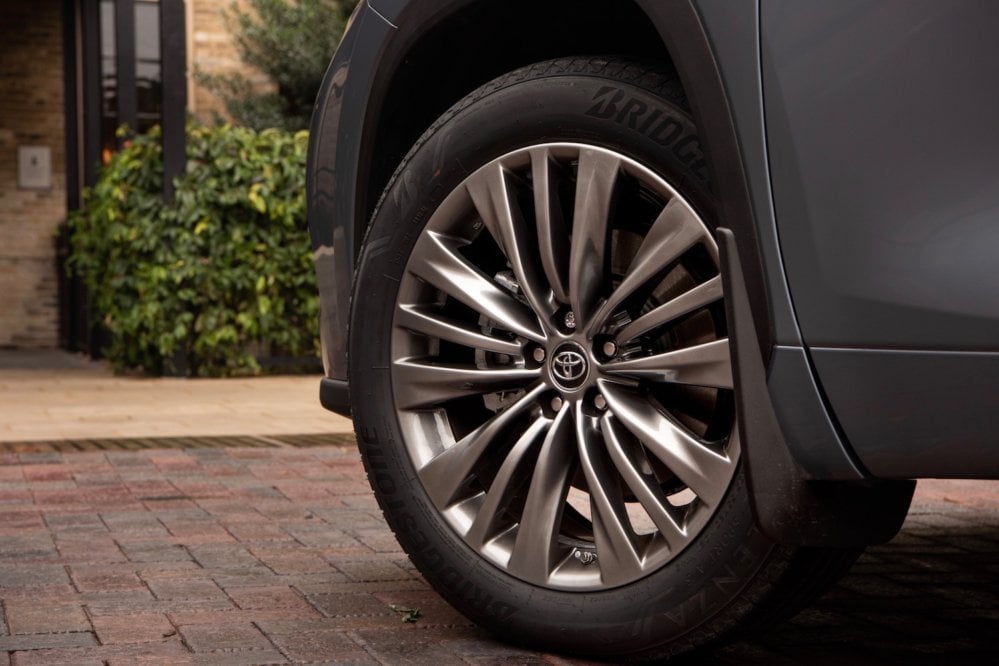 Calming some of that were nice-looking turbine-style 20-inch wheels shod with 235/55 tires, while a couple of Toyota’s signature bulbous taillamps wrapped around the rear.

Granted, the new Highlander is still not the best-looking vehicle in the mid-size crossover segment – I think the Kia Telluride is – but it is getting better.

Even with all-wheel-drive, which tends to add 150-200 pounds in weight, the Highlander moved with decent verve for a 4,200-pound, three-row crossover.

Responsive and willing, the V-6 launched the big mid-sizer with ease, feeling smooth and refined at moderate speeds.

But pin the accelerator to the floor and the engine strains a bit to push the Highlander to speed.

Mostly, I think it just likes to complain a little.

With a 0-60 mph time of 6.8 seconds, according to Car and Driver, the big crossover can comfortably merge with fast-moving traffic – that is, once we have it again.

Moreover, the Highlander can average 23 miles per gallon in fuel economy, which is way better than my smaller, 2.5-passenger Mustang.

Toyota also built the Highlander on the automaker’s stiff new global platform, giving it an athletic but fluid ride and reasonable handling for a long, tall box. 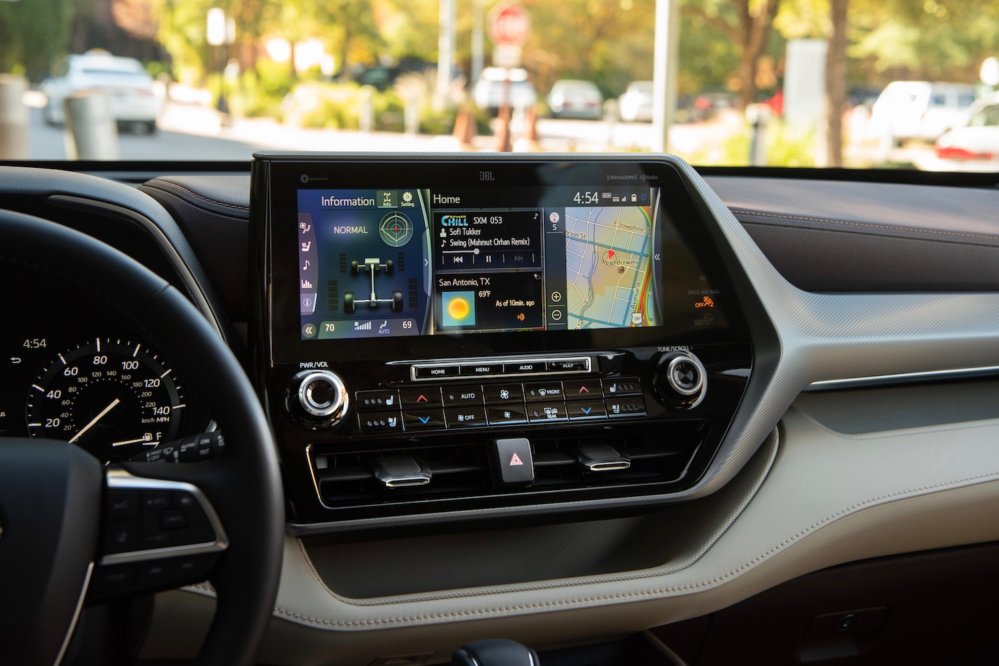 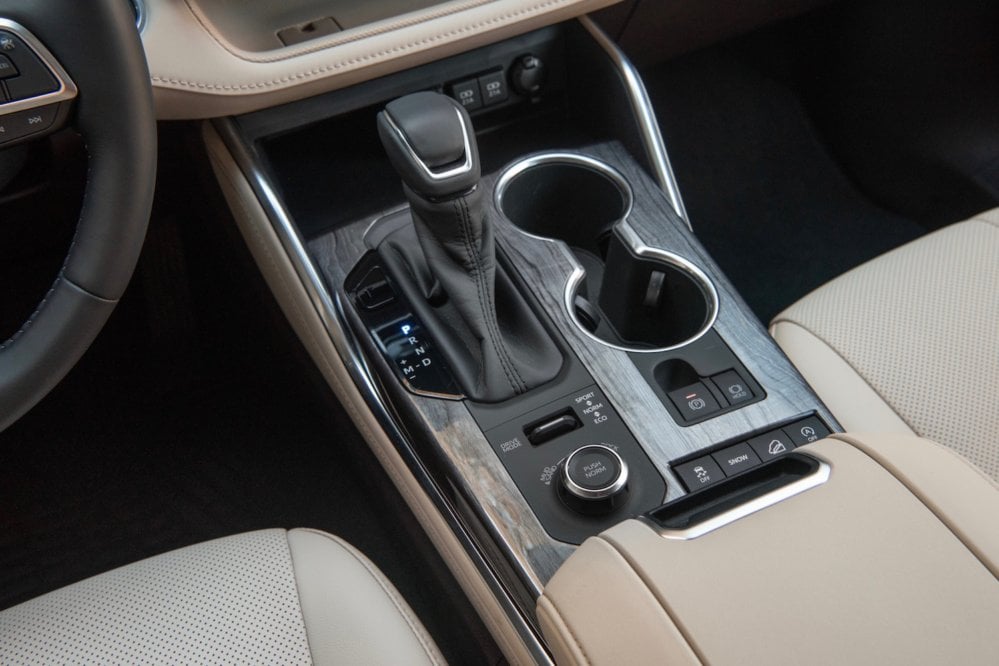 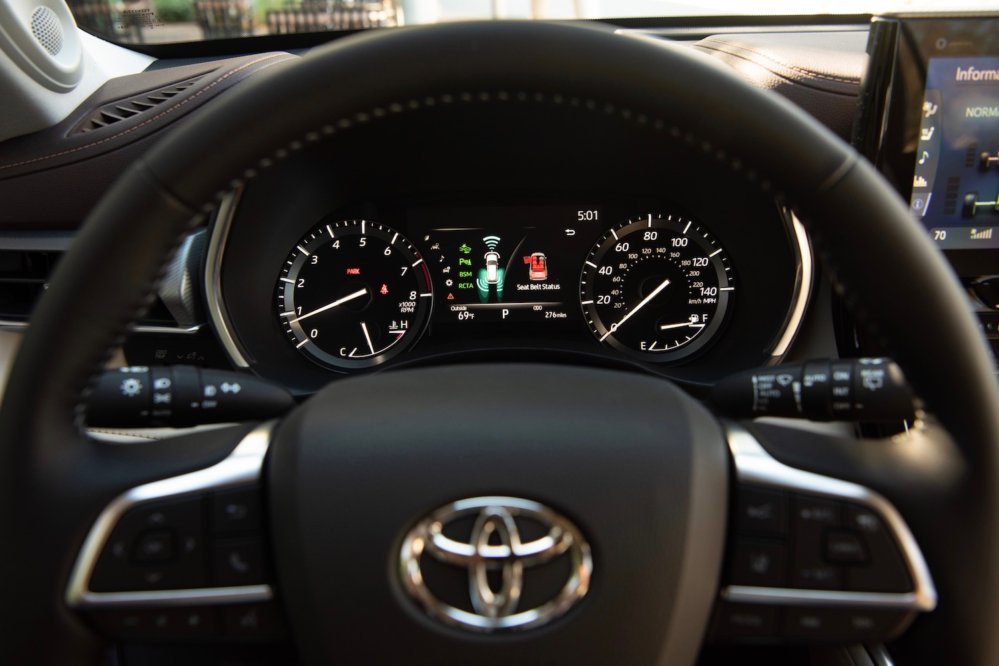 Though the steering was typically modern-numb, it felt quick and precise in sport mode.

I was also impressed with the Highlander’s intuitive 8-speed automatic, which felt like a luxury at a time when many Asian manufacturers – Toyota among them – often saddle us with cheaper continuously variable transmissions (CVTs).

Maybe a real transmission should be expected in any vehicle costing $51,000, an amount considered near-luxury a couple of years ago. A base Highlander, incidentally, starts at $34,600.

At least the Highlander Platinum provides an interior befitting its lofty sticker price.

Mine was stitched and molded in dark brown and tan, with the upper dashboard in a pliable dark-brown plastic trimmed with orange stitching.

A huge 12.3-inch touchscreen dominated the dash, looking like a cross between a giant tablet and a small TV.

It was Apple CarPlay and Android Auto compatible, with USB media and USB charge ports beneath it, as well as a smartphone charger on the vehicle’s broad tan console.

Surrounding all of that was a protruding lower dash in tan that contrasted nicely with the dark upper dash.

Meanwhile, the Highlander’s light-tan bucket seats with smooth bolsters and perforated centers stood out from its dark-brown door-panels. 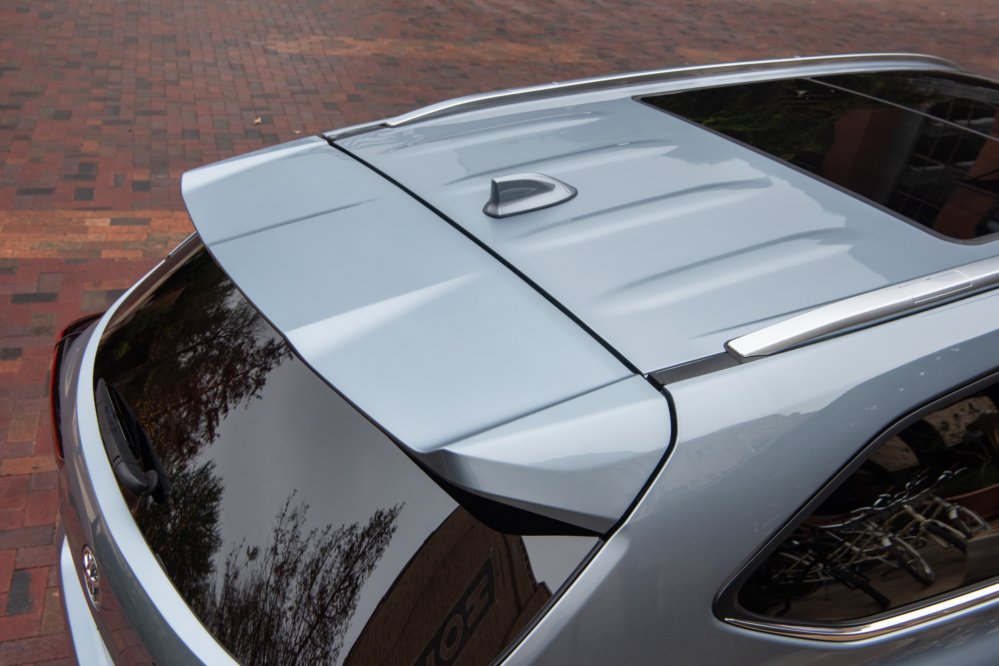 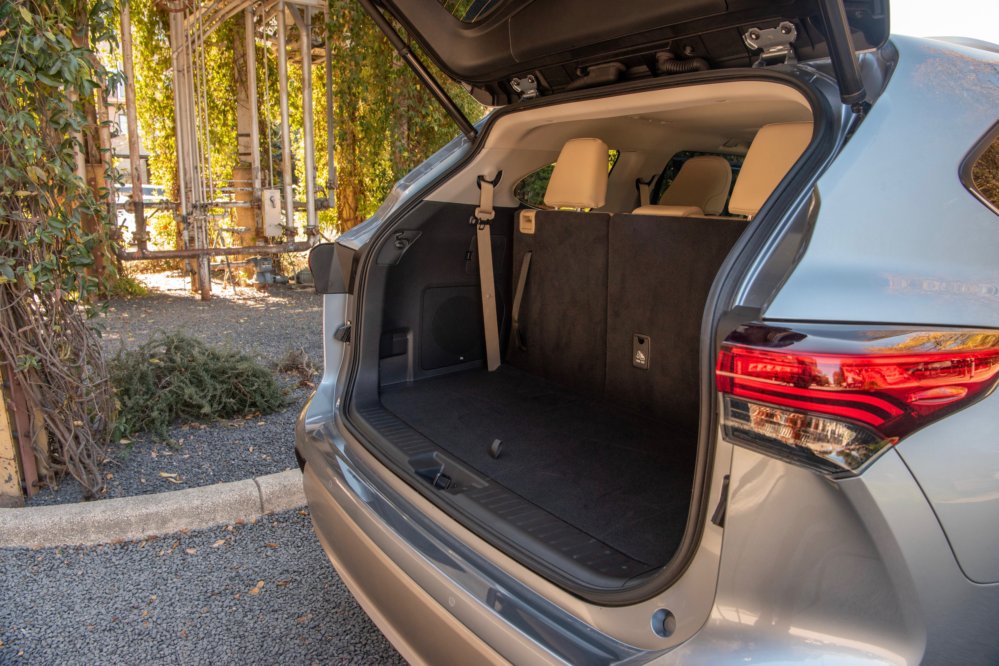 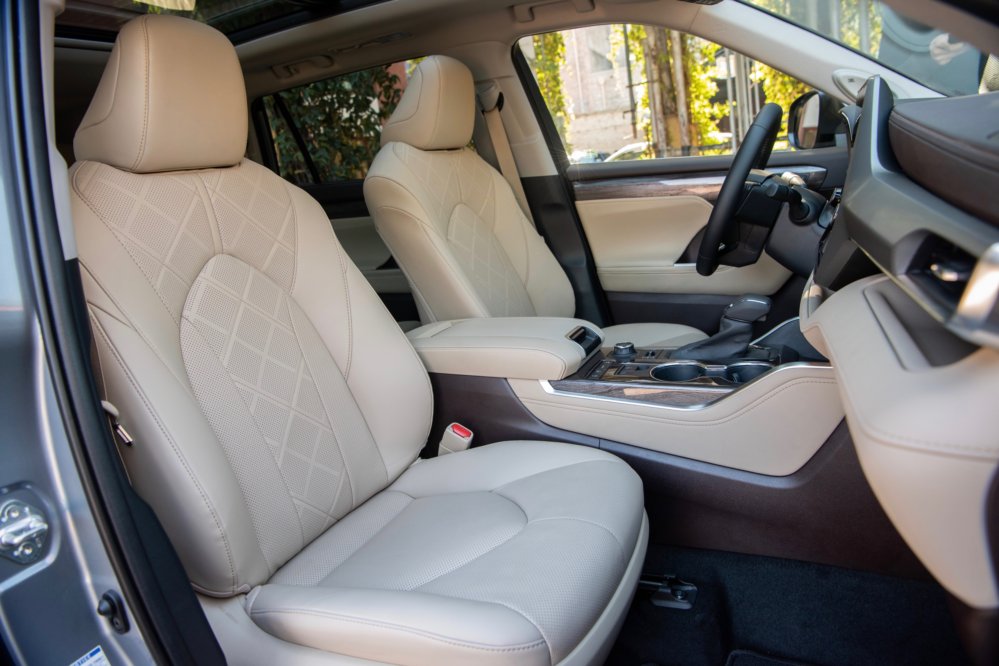 In addition, the back bucket-seats had generous leg and head-room, while the third row of seats offered just enough space for a couple of kids or maybe several dachshunds.

My well-equipped Highlander arrived with only a few options on its weighty sticker, among them the special silver-blue color ($425); carpeted floor-mats and cargo mat ($318); and cargo cross-bars ($350).

As you may know, the Highlander has gained about 500 pounds over the last 20 years, growing 10 inches in length and standing 10 inches taller.

More important for Toyota, it continues to cast a long shadow in the crowded and highly competitive mid-size crossover segment with sales second only to the Ford Explorer.

I just wish I could see over it.